May 12, 2020 – The recent arrest of John Scott Moretti, also known as J. Scott Moretti, Scott Moretti and John Moretti have brought to light some incredible and unsettling connections. From the Chicago Mafia crime family, to the founding of the “SIGNA Society,” the CIA secret society, to the State Department, Diplomatic Security, to the Vatican and allegations of sexual abuse within the Catholic Church. We end up getting a picture of a well-connected CIA family, with not only J. Scott Moretti, who was arrested for forcible sodomy of a child. His brother Mark Moretti who, after years in the Diplomatic Service seemingly had a “change of heart” to become a priest in the Catholic Church. Then there is the father who may have been involved in the assassination of John F. Kennedy — it’s a story that will take several articles to tell, but here is what we have been able to piece together so far …

So who is J. Scott Moretti? And what are his connections​ if any, to the Swamp? Is his arrest​ just the beginning of what’s to come for those involved? The investigation into the Moretti family and their possible connections to Pedophilia, the CIA and the Vatican, is just getting started. 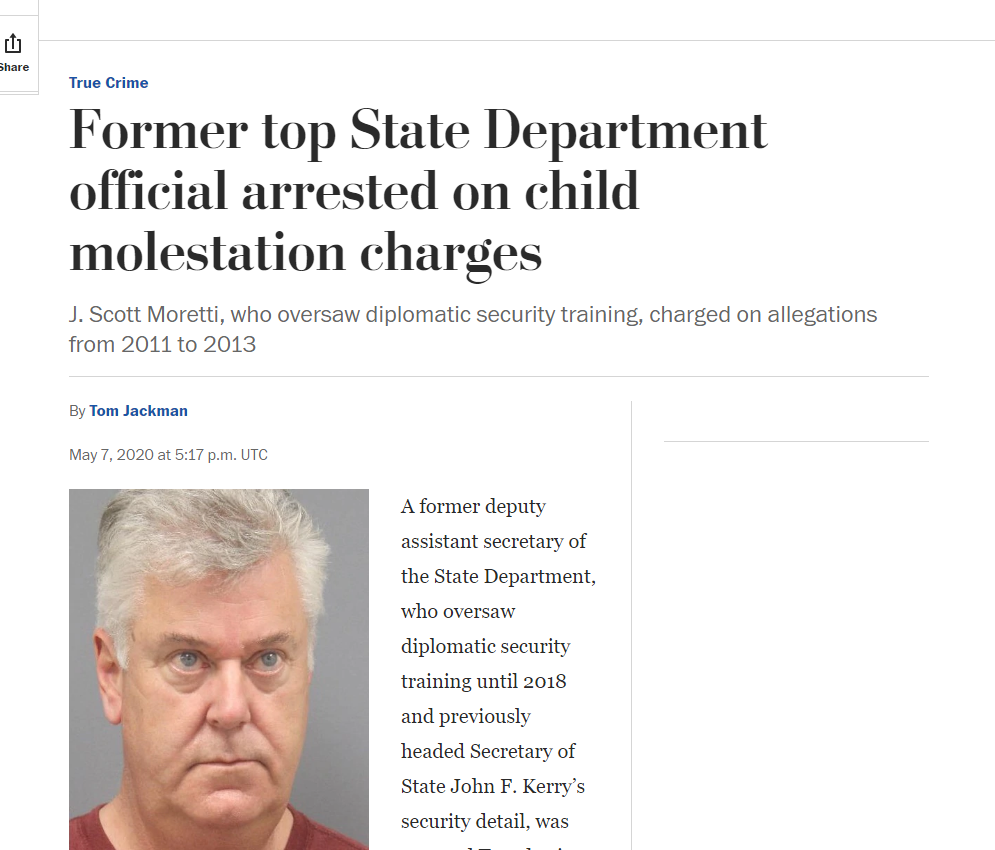 J Scott Moretti, who oversaw diplomatic security training (until 2018) and previously headed former Secretary of State, John Kerry’s security detail, was arrested (May 5, 2020) and charged with molesting a child between 2011-2013.

(Ongoing thread, will add more as I find it.)

… You are not going to BELIEVE how CONNECTED THIS GUY IS.

On top of working as Head of Security for @JohnKerry…https://t.co/HnUg5tV47u

Let’s take a closer look at his resume. 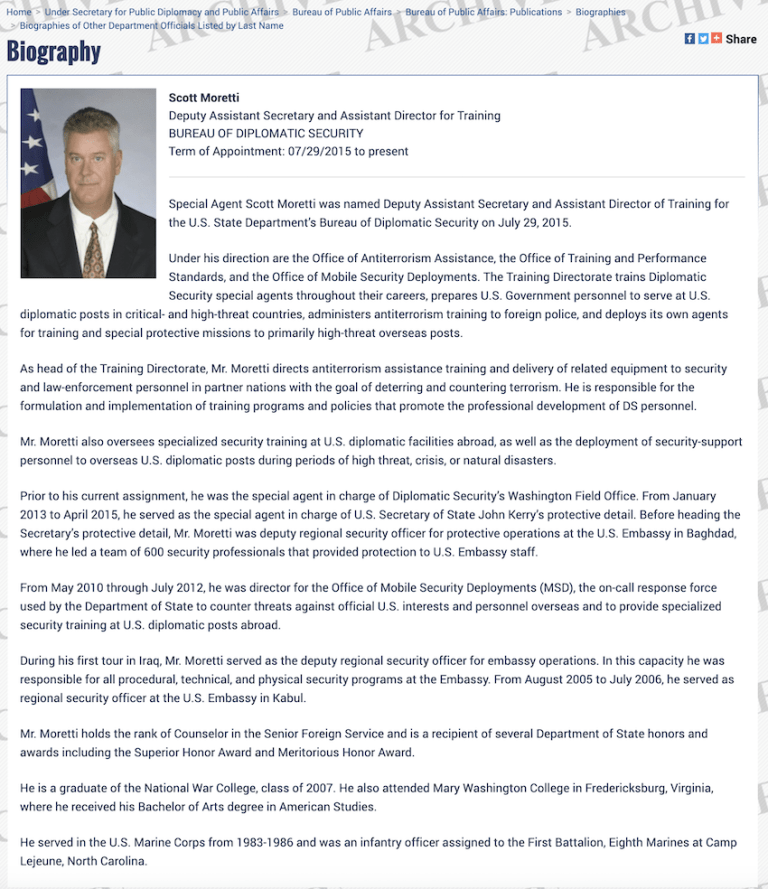 To begin with, according to his LinkedIn account and his biography (above), he worked as Head of Security for John Kerry (2012-2015). This role required him to:

serve as a personal security advisor to Kerry, executive staff, and family members.

That is a very important job, isn’t it? A ​trusted position. You don’t entrust your or your family’s safety to just anyone, do you? So how did he get promoted to this position?

LinkedIn goes on to outline that prior to his position with Kerry, he also was:

Deputy Regional Security Officer at the US Embassy in Baghdad, Iraq. (July 2012-Nov 2012)

Strangely, he was only in this position for five months. Five months is a short tenure for this position, isn’t it? How is that significant? Well, the Benghazi attack was coordinated during this time frame … September 11, 2012. So, now the picture is becoming clear. Was this guy promoted to John Kerry’s personal security detail because of what he did or didn’t do during the Benghazi attack? ​ Read Here 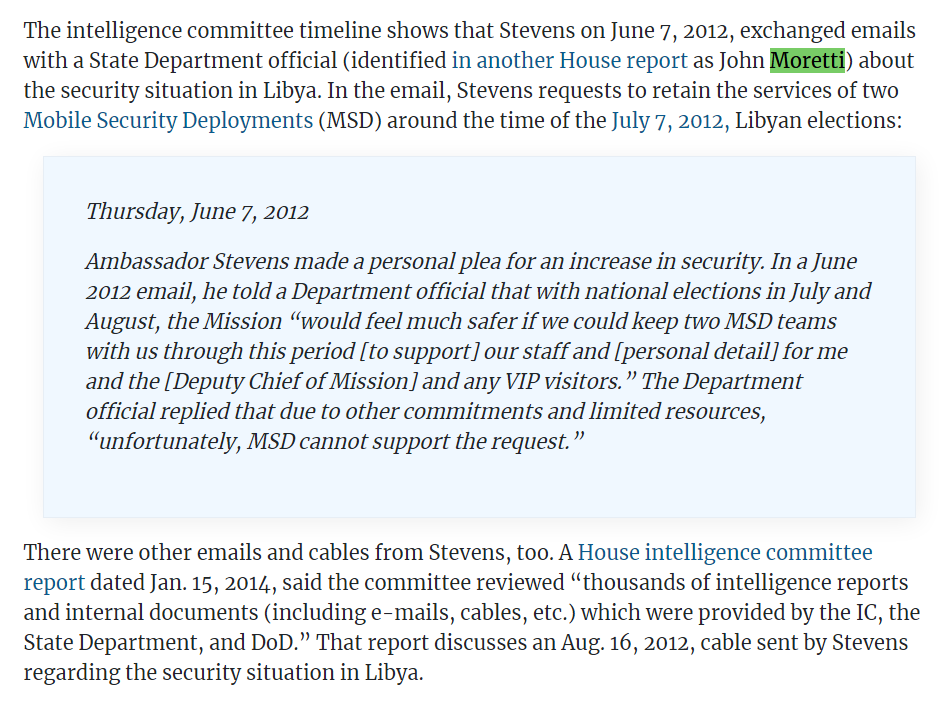 Who is named in the emails? Moretti

Mr. Moretti’s position during this short time in 2012 was responsible for:

ALL protective security programs for the United States Embassy in Baghdad, Iraq.

This included, but not limited to,

the performance, conduct and safety of up to 800 security professionals operating throughout Iraq while managing an operating budget of OVER $100 MILLION DOLLARS, annually.

So, what else does a man with this much power do? What does diplomatic security allow you to control worldwide? What is required of him by those in higher positions? Where does his loyalty lie?

WE BELIEVE J. SCOTT MORETTI TO BE THE OFFICIAL mentioned in this article  from 2015, top State Department officials blocked internal investigations, showing  prejudice in the outcomes of investigations and covered up sexual abuse allegations.

An earlier version of the draft report dated 11/16/2012 reveal much greater detail about internal investigations that were blocked by top State Dept. Officials.

Sources also reported that a senior [diplomatic security] official successfully protected some agents on the Secretary’s Detail from investigations into misbehavior while on official trips, the November 16 draft said.

Was J. Scott Moretti part of the upper echelon of the “diplomatic security” so noted here? According to his resume & biography, he was. Mr. Moretti’s resume reflects his key position within the diplomatic security detail for key players in the swamp. Players as high up as John Kerry and Hillary Clinton.

Still quoting from that 2015 article noted above,

‘Another passage that was removed from the public report suggests officials in Clinton’s office may have protected an ambassador from a child abuse investigation.’

‘Sources reported that a senior “7th Floor” Department official ordered [diplomatic security] to stop the investigation of an ambassador accused of pedophilia, and another such senior official had [diplomatic security] stop an investigation of an ambassador-designate,’ the draft reads.
The seventh floor is the location of the secretary of state’s office, as well as the offices of the deputy secretary and the undersecretaries, according to the State Department’s website. If any of these details were removed because of exculpatory information, this is never stated.

According to this video from 2013, Hillary’s State Department covered up a pedophile ring, all while  Mr. Moretti was still serving as a top official of “diplomatic security.” 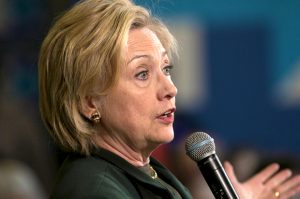 Wow. Look at the power given to this man in a relatively short amount of time. Look at the amount of money he was in charge of … yet have you heard of him until his arrest? Nothing to see here, though. Or is there?

Perhaps a family connection? Well …well … what do we have here? Not surprisingly, his father, John Moretti Jr, was a retired security officer for the CIA, according to his ​Tribute​ at Everly-Wheatley.

He became a charter member of SIGNA, the Association of retired CIA security agents and participated in years of social activities.

How does one become a “charter member” of SIGNA?

And interestingly, the tribute goes on to say he:

‘was an expert in US military and intelligence history.’And Notably, ​‘was very fond of the parish school and the religious training the children received.’

That stands out, doesn’t it? Why was he so fond of the parish school? Why was he active in the “religious training the children received.” Considering what one of his sons has now been arrested for (child molestation), the bigger picture starts to come into focus.

What will we uncover as we take a closer look at the father, John Moretti Jr? What connections do he and his other son, Mark, have to the Vatican? 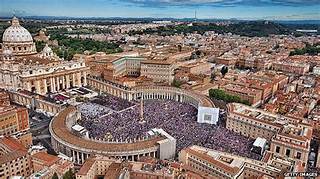 In Part 2, we look at the father and brother in much more detail. What we have found was so shocking, it deserves its own article.

Stay with us as this story unfolds …

I hope the State Dept. can be cleansed of these freaks. I don’t think there’s hope for the Vatican. Looking forward to part 2.

The web connecting acts of treason, spanning decades. The DNC up to their eyeballs in it. Benghazi, Clinton, Obama. Vatican, child abuse. The killing of JFK. Decades of abuse by the Mafia, DNC, Clintons and now Obama.

Excellent article and work on the J.Scott Morretti story. Can’t wait for your next part 2 on this. Incredible how deep the swamp goes!

Great article. Good digging!
Thank you all, for
the many hrs. spent researching to bring us the truth.

This website uses cookies to improve your experience while you navigate through the website. Out of these, the cookies that are categorized as necessary are stored on your browser as they are essential for the working of basic functionalities of the website. We also use third-party cookies that help us analyze and understand how you use this website. These cookies will be stored in your browser only with your consent. You also have the option to opt-out of these cookies. But opting out of some of these cookies may affect your browsing experience.
Necessary Always Enabled
Necessary cookies are absolutely essential for the website to function properly. This category only includes cookies that ensures basic functionalities and security features of the website. These cookies do not store any personal information.
Non-necessary
Any cookies that may not be particularly necessary for the website to function and is used specifically to collect user personal data via analytics, ads, other embedded contents are termed as non-necessary cookies. It is mandatory to procure user consent prior to running these cookies on your website.
SAVE & ACCEPT
5
0
Would love your thoughts, please comment.x
()
x
| Reply