April 29, 2020 – Did MSNBC’s Rachel Maddow coordinate her coverage of RussiaGate with liberal billionaire and Democrat mega-donor George Soros? Did she knowingly participate in a disinformation, or misinformation campaign sparked by elements of the Obama Intelligence Community and National Security Establishment?

Read on, you’re about to find out …

Readers familiar with the SpyGate scandal should be well aware of how certain mainstream media (MSM) outlets and pundits led the public witch hunt against members of the Trump campaign using strategic “leaks” from members of the Obama Intelligence Community. These leaks were often later exposed as false. The Washington Post column by David Ignatius is currently being looked at in U.S. Attorney John Durham’s investigation into the origins of the Russia probe.

Now, thanks to some posts by anonymous internet poster and alleged Trump administration insider “QAnon,” some researchers may have discovered how Rachel Maddow worked with George Soros and members of the Obama regime to promote disinformation about Trump.

Here are Q posts relating how these coup plotters communicated with each another. Game forum comms and Gmail drafts are some of the things mentioned: 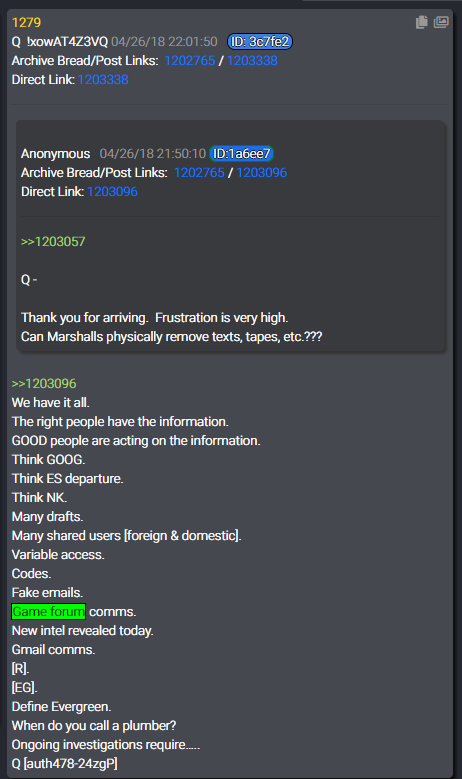 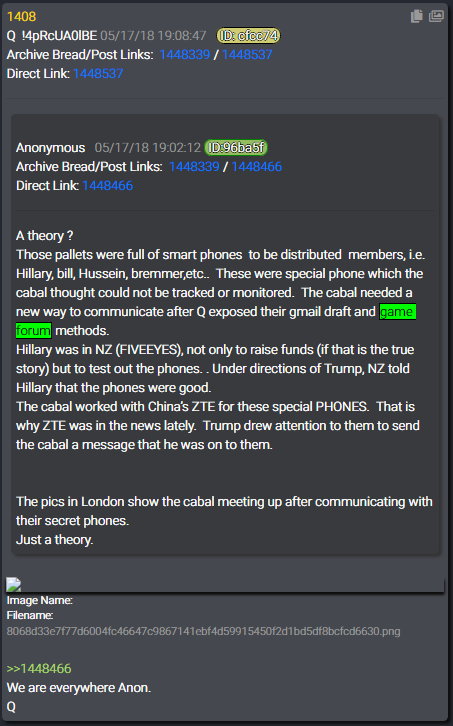 Here we get mention of PlayStation and XBox chat logs … 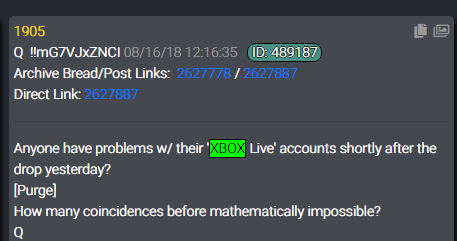 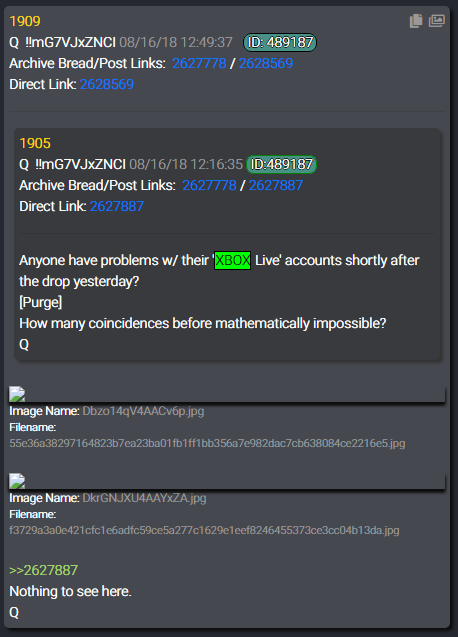 All of these posts can be read at Qmap.pub, or any other Qpost aggregator. 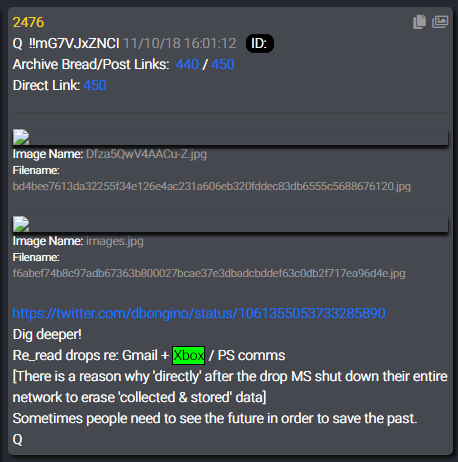 Q reminds us about the Gmail, XBox and PlayStation comms, and of the Microsoft shutdown of their entire network, thereby erasing ‘collected & stored’ data. 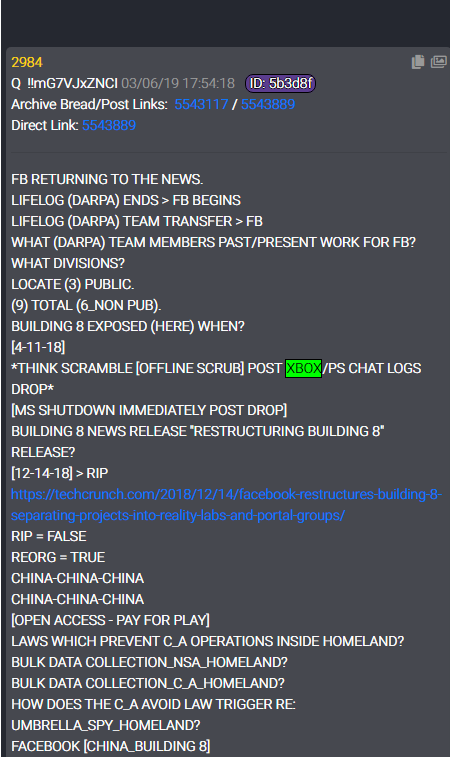 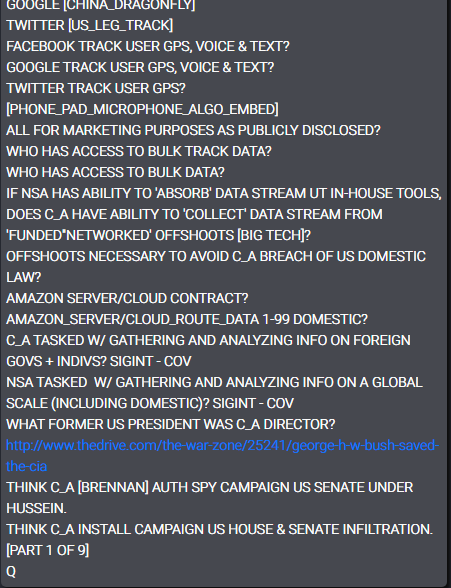 We are reminded of the urgency of the matter, and that everything must be investigated by the book, because the corruption is so bad.

Here we are asked about George Soros, and I have discovered he has been investing in Global Telecommunications since at least the late 1990s.

What is interesting about this, is that George Soros invested in Chinese Telecommunications firms, as well as Blizzard Entertainment which is a leading video and online game creator. 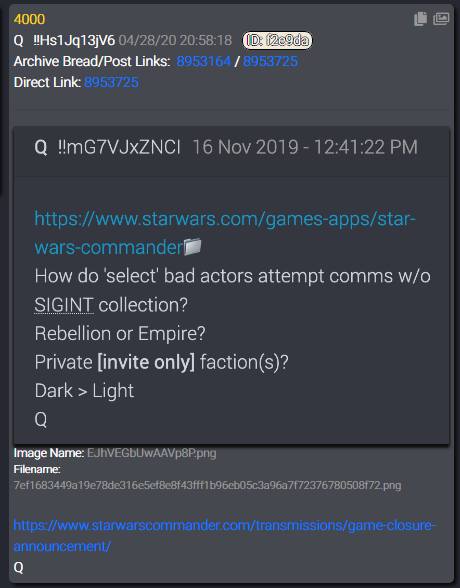 Q points us to a StarWars game, which will gain importance as we look at some interesting posts by former FBI Director James Comey and Ivanka Trump later. 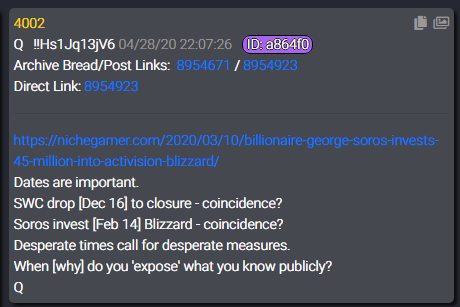 Here is when Q mentions Soros investments in Blizzard. 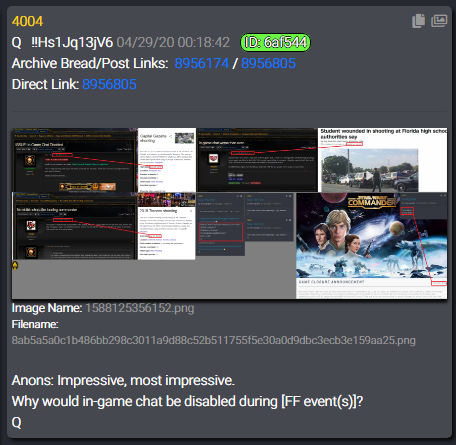 This is an important find that appears to corroborate Q’s earlier claims. 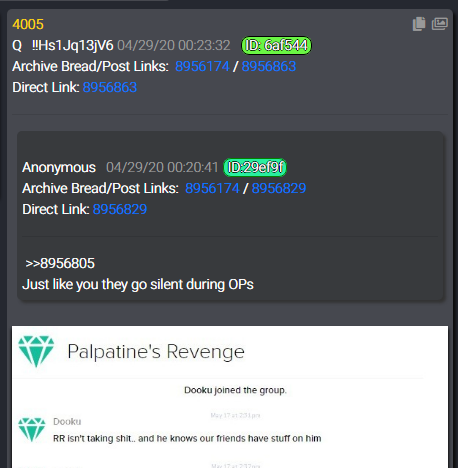 This is from Palpatine’s Revenge and is the first time RM (Rachel Maddow) is referenced. 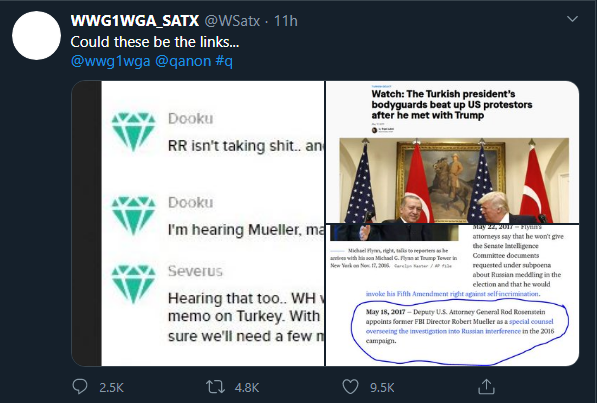 This chatlog gives us details that we can try to corroborate ourselves.

Zoom in. "carrier pigeon" "she" "RM". Has to be Rachel Maddow! pic.twitter.com/PFP8OpsZwz

Michael Schmidt and Rachel Maddow caught shaping the #RussiaHoax narrative to the public.https://t.co/XphPSmEbrI 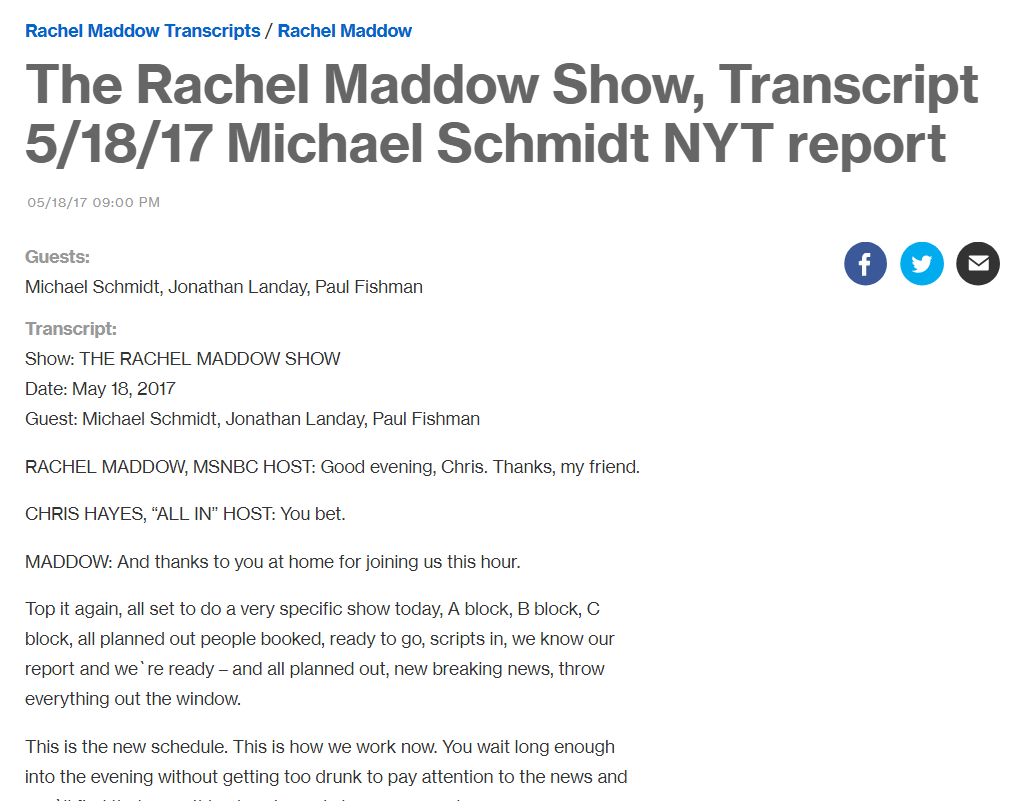 I remember when #PalpatinesRevenge log was posted on 4Chan back in 2017. Screenshot from that night. pic.twitter.com/L9AmNpDlwU

Remember the Comey picture with the StarWars toys? Is he Severus in Palpatine’s Revenge chatlogs?

What is it with these losers and game/game-forum comms 🤣

If you zoom in, you can see and empty bird cage. Is he signaling that birds are “singing” or perhaps referencing the “carrier pigeon” who entered the Palpatine’s Revenge chat?

The Force is strong in my family. ⭐️ pic.twitter.com/oT0jFfy5Lb

Was Ivanka here signifying to Comey that “she knows” what he is signaling about?

It seems we have further corroboration of things that were discussed in the chatlogs. 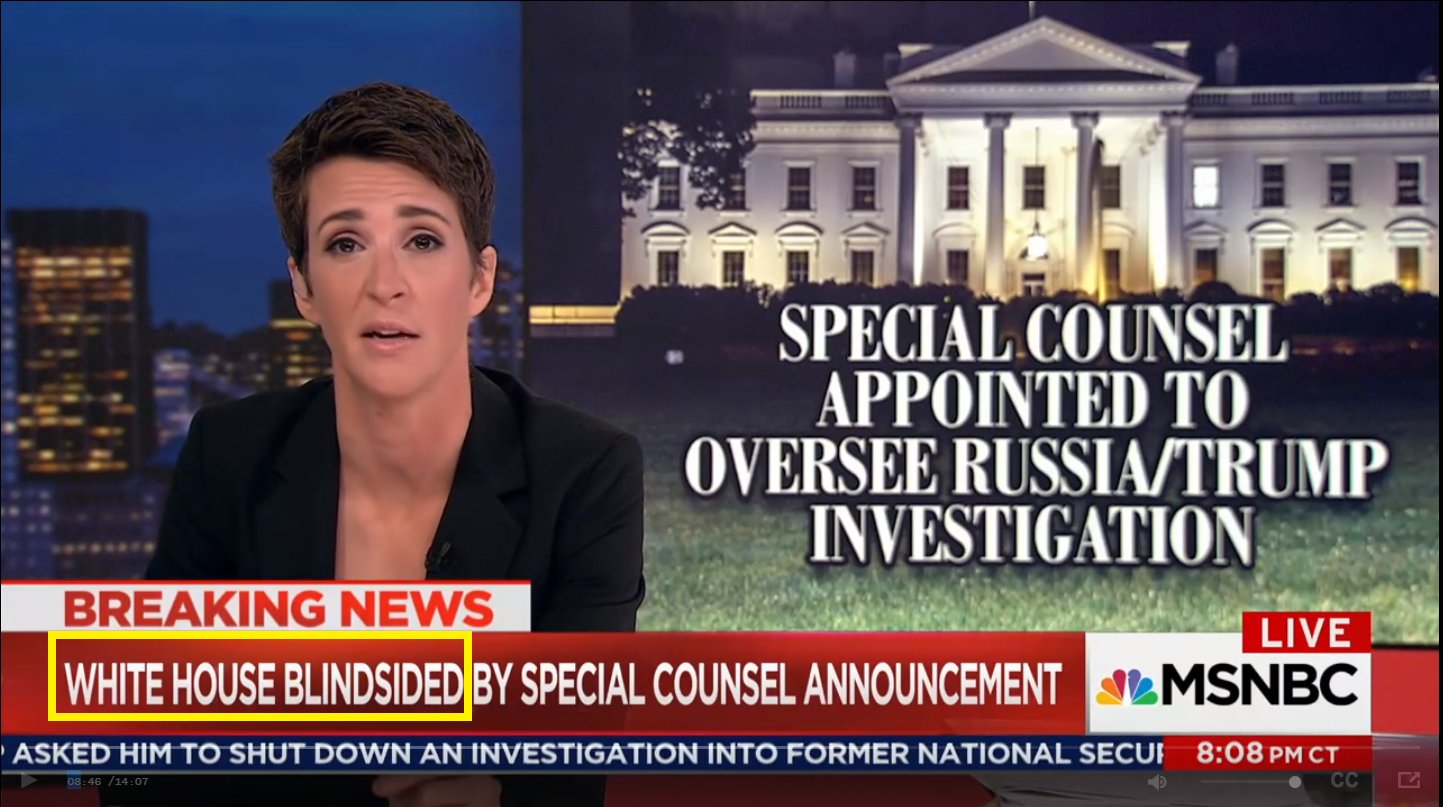 White House “blindsided” is the language she uses, the same descriptor from the chatlogs where they discuss “tipping off” RM.

Breakdown of the TREASON Cast of Characters:

Another researcher, and host of The Roxi Files on Patriots’ Soapbox has an idea:

It should also be noted that the game comms suggests there were multiple conversations, several times per week, with up to 13 participants.

S could also potentially be Strzok or Sally Yates.

If the comms are real, it is likely there are many more screenshots which could provide additional information.

Q replies "Close." Does that mean 'close, as in near' or 'close, shut the door'?

These comms were done via gliphy, not via a game 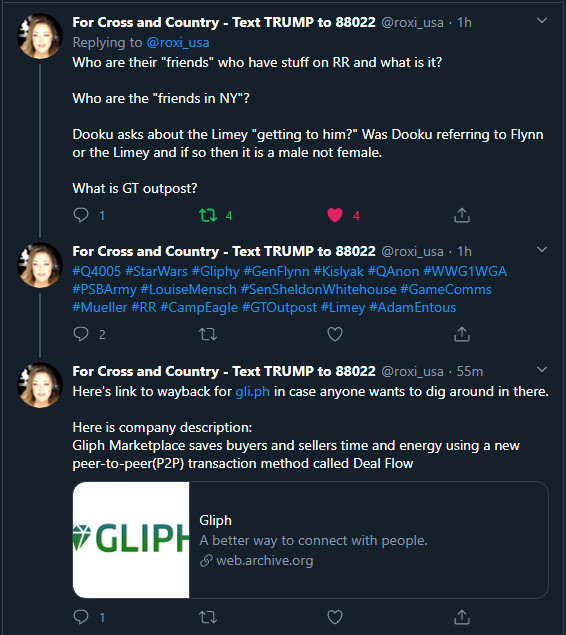 Now, let’s go back to what QAnon pointed out regarding Soros and Blizzard, and the many ways these people try to communicate securely. He asked “How does Soros comm [securely] with DNC? How does China comm [securely] with DNC?” and everyone assumed that was a hint toward the game comms. But it should be noted that Soros is HEAVILY invested in global telecoms. 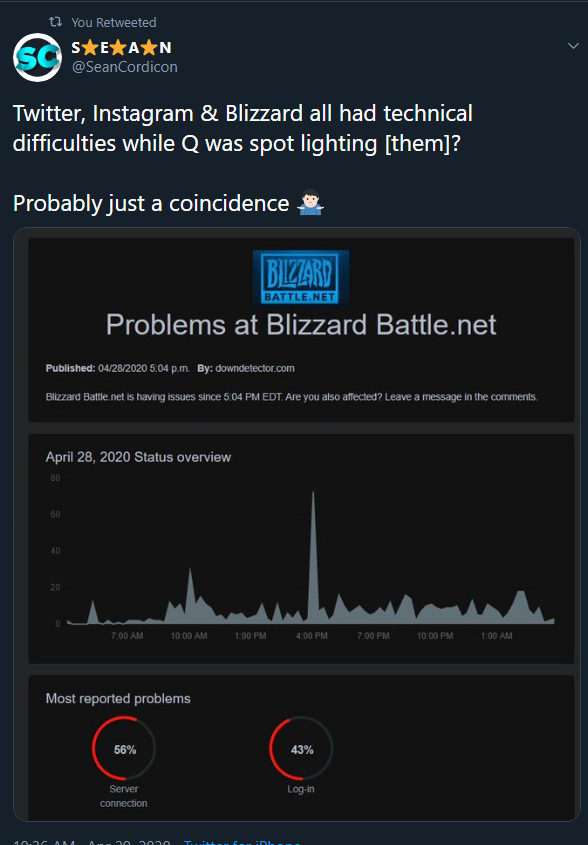 Flashback to 1998, #GeorgeSoros gets in to #China #Telecoms

[GS] buys a stake in #StarTelecomInternationHolding in a move to "tap the mainland's telecommunications market" & develop the "wireless cellular networks" in alliance with the PLA https://t.co/vDz89OcjkM #QAnon pic.twitter.com/LkegN0eGOi

Just as recently as last year, Soros more than doubled his stake in the Brazilian telecoms firm Oi.

It appears George Soros has set up his own shadow telecoms networks, and has worked to create the telecoms for the CCP.

We also know he invested in an app that helps “migrants” avoid “police and border control” checkpoints. This was used in Europe to help migrants get into the heart of Europe while avoiding authorities as well as in Mexico and Central America for the caravans that were assaulting the U.S. Border.

If he can create an app for migrants, and an entire shadow network, what about for corrupt politicians?

Finally there is the strange connection between Q post signatures and online games:

"The CIA made a Magic: The Gathering-style card game for training agents, and we played it"https://t.co/NtzsTt9RA1

My reminder to Rachel Maddow and anyone else who knowingly participated in this disinformation campaign: The NSA has it all.

I would look very carefully at the U.S. Code of Criminal Procedure:

Get ready to watch the house of cards come tumbling down.

Please share this article. It is just one example of how the media engaged in an information warfare psychological operation against the American people, and the world.

If the Smiths month Act was repealed how much of a court case do they have?

“Shall we play a game?” Q, that “cheeky bastard” as the Britts would say. Nice work laying this out @Radix.