As more evidence is coming out about the the #Spygate coup attempt, the actions taken by senior members of the U.S. Intelligence Community, in collusion with the HRC Campaign, the DNC and the mainstream media establishment to attempt not only to entrap and smear the Trump campaign but to set up one of the biggest propaganda efforts ever run on the American people.

The latest information coming out about the FBI’s attempts to setup members of the Trump campaign:

Both Maria Butina & Anna Chapman are redheads. Both had their cases handled by Robert Mueller.

Butina is NOT a spy, but is imprisoned as a spy.
Chapman was a spy, but was set free.https://t.co/rvvxbWwQgV

According to an article by the Gateway Pundit:

“The Mueller Gang set up an innocent woman and then lied about it by withholding pertinent information.

Today this woman sits in prison when exculpatory evidence withheld by the Mueller gang would have exonerated her!” – The Gateway Pundit

For background the judge told DOJ they HAD to disclose Brady material to her lawyers, they claimed there was none. pic.twitter.com/j5v4vawpG3

Byrne had a “non-standard agreement” with the @FBI and assisted the government by kindling a manipulative romantic relationship with her, all under instruction from the highest levels of DOJ. pic.twitter.com/VEUa587S13

He continued to inform of her activities and the government never stopped her yet shes been charged now with being a national security threat? The two of them lost touch and it was the FBI In 2016 that told Byrne to re-connect. pic.twitter.com/5jd6RQWf2k

Looking back at some posts Q made long before any of this information or allegations came out, he indicted that the FBI was spying on other republican campaigns as well: 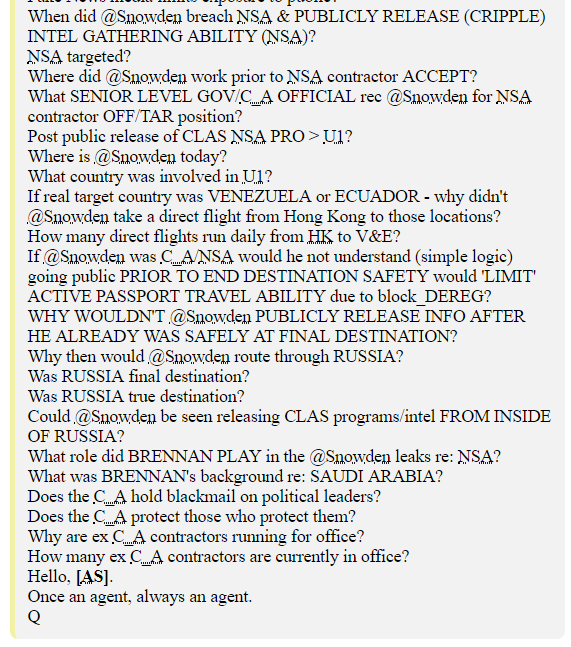 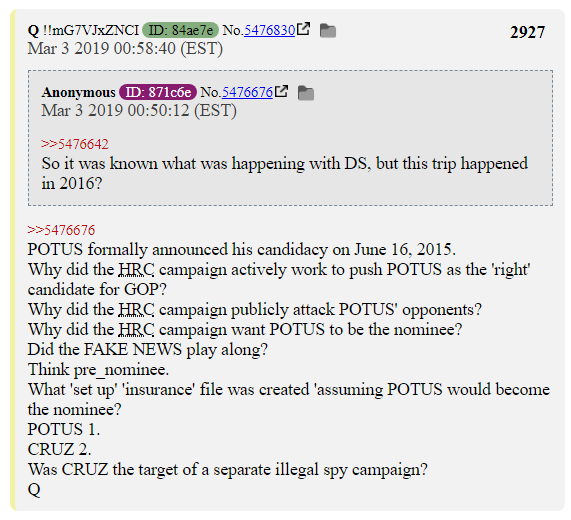 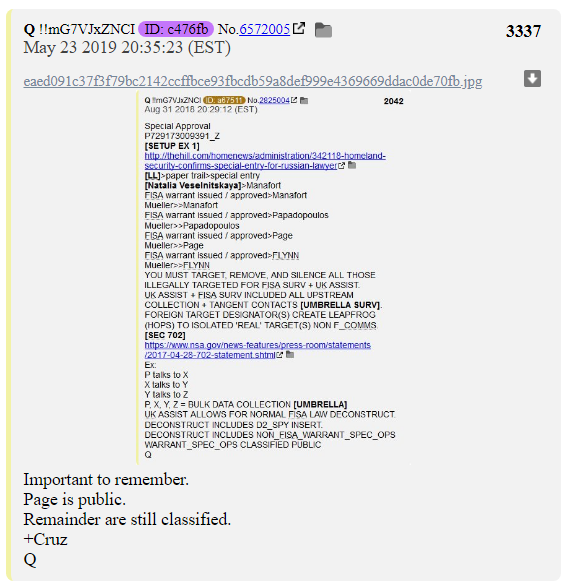 So, Q asked back in January of 2019, ‘When will the public discover that Ted Cruz was also illegally SURV (Pre_Potus_R nomination)?’ And now in July 2019, months later, we get Patrick Byrne, former CEO of Overstock coming forward with his allegations:

Patrick Byrne went on live television to dismantle the FBI, saying he took orders from Peter Strzok during the 2016 presidential election to spy on Donald Trump, Ted Cruz, Marco Rubio and even Hillary Clinton. https://t.co/EWJ9xu4kfY

James Bamford details an interesting profile of Maria Butina for the New Republic:

“With anti-Russia fervor in the United States approaching levels directed at Muslims following the attacks of September 11, 2001, it was easy for prosecutors to sell the story of Butina as a spy to the public and the press. But is she really? Last February, Robert Mueller, the special counsel leading the Russia probe, indicted 13 Russian spies for interfering with the 2016 election. And in July, two days before Butina was arrested, Mueller charged twelve more Russians with hacking into email accounts and computer networks belonging to the Democratic National Committee and Hillary Clinton’s presidential campaign. It is not inconceivable that Butina is among their ranks.

Yet a close examination of Butina’s case suggests that it is not so. Butina is simply an idealistic young Russian, born in the last days of the Soviet Union, raised in the new world of capitalism, and hoping to contribute to a better understanding between two countries while pursuing a career in international relations. Fluent in English and interested in expanding gun rights in Russia, she met with Americans in Moscow and on frequent trips to the United States, forging ties with members of the National Rifle Association, important figures within the conservative movement, and aspiring politicians. “I thought it would be a good opportunity to do what I could, as an unpaid private citizen, not a government employee, to help bring our two countries together,” she told me.

The government’s case against Butina is extremely flimsy and appears to have been driven largely by a desire for publicity. In fact, federal prosecutors were forced to retract the most attention-grabbing allegation in the case—that Butina used sex to gain access and influence. That Butina’s prosecution was launched by the National Security Section of the District of Columbia federal prosecutor’s office, led by Gregg Maisel, is telling in itself: According to a source close to the Mueller investigation, the special counsel’s office had declined to pursue the case, even though it would have clearly fit under its mandate.

A dozen FBI agents had raided her apartment. “They knocked on the door, and that knock I will never forget,” she told me. “They pushed me inside, told me to sit down. I was completely in shock, but what could I do?” The agents searched her apartment for approximately seven hours, apparently looking for hidden transmitters or other evidence of spy-craft. “It was a horrible day in my life,” Butina said. The FBI found nothing, however. There was no mention of spy gear in her indictment, and there were no charges of espionage.

This was the second time the U.S. government had sifted through Butina’s personal life. Nine days earlier, in response to a request from the Senate Intelligence Committee, she voluntarily turned over more than 8,000 documents and electronic messages and testified in a closed hearing for eight hours. But they also uncovered nothing incriminating.” – James Bamford

So was Maria Butina simply a young idealistic girl looking to earn some money and make a name for herself who got caught up in the FBI’s relentless pursuit of the Trump Campaign and anything they could use to smear it? Whatever the true story may be, it’s clear she was not a good spy if she was one at all. She posted pictures to social media and talked about all her activities in political circles and the NRA online for all to see. She seemed to be acting more as a potential unregistered lobbyist, as opposed to some type of James Bond femme fatale.

For some other theories on Maria Butina and her involvement in the #Spygate Psycho-drama, see the video below: