She’s the hotty with the body from Hawaii, but just who is this sultry siren with a skunk patch? The newly “retired” Rep. Tulsi Gabbard first graced the national stage during the Democrat primary debates as a contender to the royal throne. Rep. Gabbard bears the unusual distinction of following the Hindu faith. She only pretends to believe in G-d when she falsely invokes His name on TV. I guess she speaks the language of politics, apparently. It’s not her gimmick, though. The lady has her own brand of identity politics: coasting on her veteran status. So, she served in the military. Lee Harvey Oswald served in the military.

Rep. Gabbard has styled herself as a moderate Democrat who reaches across the aisle to the Right. Let’s scratch the surface and take a closer look. Rep. Gabbard touts an economic policy endorsed by Andrew Yang, Liz Warren, and Bernie Sanders. They call it universal basic income (UBI). Let’s unpack this, shall we? “Universal,” everyone is getting this, whether you want it or not. “Basic income,” redistribution of wealth, which can only be accomplished through the Government controlling the means of production. There is no difference between Rep. Gabbard’s ideology and soviet style Communism. Let that sink in.

If Rep. Gabbard was elected president, she would be running the economy with Bernie Sanders, Liz Warren, and Andrew Yang. That sound good? The woman is to the left of the Red Chinese enemy. They still allow Socialized private ownership over in that prison camp they call a homeland. Chy-na. It’s in the Pacific, not far from Hawaii. 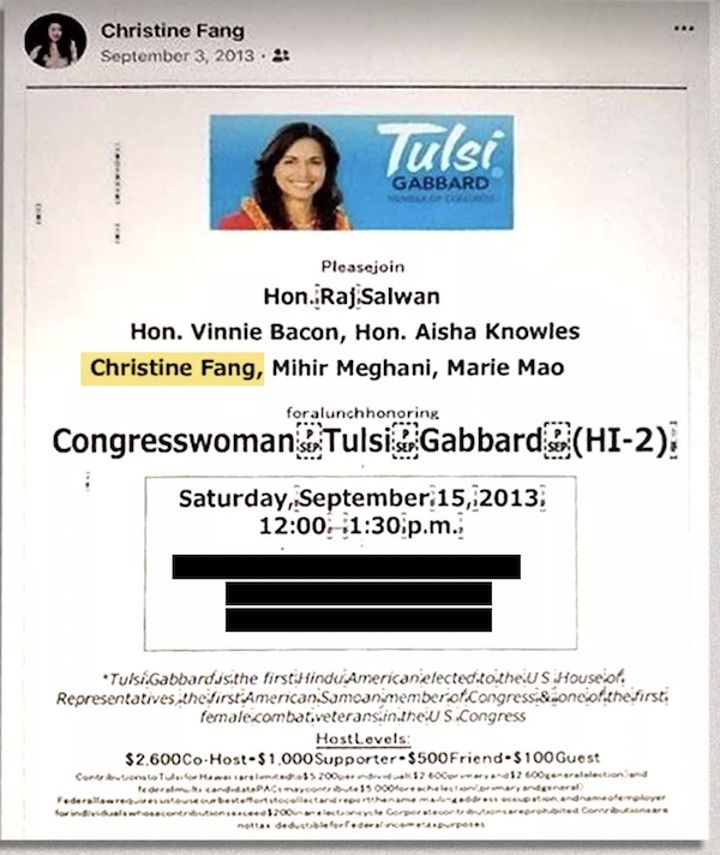 Evidently, one Ms. Fang Fang provided political and material support to the lovely Rep. Gabbard to help her get elected. Hmm.  Imagine that? Fang Fang is the notorious spy who got her incisors into Rep. Eric Swalwell (D-San Francisco). It never occurred to Tulsi that she was taking money from the CCP? She didn’t think there was anything suspect about a Chinese National, with no business in her district, out-of-state, just showing up to help her career? Usually, political backers expect something in return for their largesse.

What were the terms of their deal? What was the quid pro quo? That is a question for the lady to answer, but you won’t hear Tucker Carlson ask her. He had her on his Fox show the other day and brought up Hillary’s espionage allegation, making light of it, as if it were silly, too absurd to be taken seriously. Hill is shrill, but she did come from the State Department. What did she mean by “Russian asset?”

To my knowledge, Rep. Gabbard sued Hillary for slander, but has she cleared her name? That was before the Fang Fang story broke, so I think Hillary has a pretty good case. The truth is the best defense for slander. What could possibly be Rep. Gabbard’s defense for colluding with a Chinese spy? It’s not what it looks like? Because it looks like she betrayed America and sold us out to the enemy. That is what it looks like to me. Or is sleeping with the enemy okay now?

Speaker Pelosi seems to think so. She said she sees no problem with Rep. Swalwell remaining on the House Intelligence Committee. In fact, he got promoted to additional sensitive committees. Is Eric Swalwell supposed to be James Bond? James Bond is smooth. Eric Swalwell farted on live TV.

Why are the Republicans in Washington not holding hearings to get to the bottom of this? Why, indeed. We can’t count on them to do what is necessary, so it’s up to us to make things right. Inside the heart of every patriot burns passion and a purpose. We can win.

Tulsi the “war hero” has a vision for U.S. foreign policy. She wants no regime change wars. Okay. What about Iran? Why did Rep. Gabbard, apparently on her own authority, fly to Syria to meet with Assad? Do Congresswomen usually meet with heads of state on their own, heads of state who are hostile to the West, on foreign soil? What did they talk about? Syria is a war-torn, radical Islamic, leftist regime, allied with international terror groups. Well, that would explain her mysterious opposition to Israel, America’s best ally in the region. She wouldn’t know about the Holy Land, being a pagan. Syria and Iran are Revolutionary radicals. We are facing the same threat here in our country.

The woman is ambitious.  I’ll give her that.  It takes a lot of thinking big to finagle your own foreign policy without checking with the military, but you see, Rep. Gabbard knows better than five-star generals. It’s part of her shtik. She is just a regular vet out to remake the military because she knows what it’s like to serve her country. Was Tulsi Gabbard serving her country when she surreptitiously met with a leftist warlord on her own?

She shows an independent streak to go with the skunk streak, only she’s lockstep with Bernie Sanders, Liz Warren, and Andrew Yang on UBI. Nice of her to downplay her Socialist agenda when she reaches across the aisle, not unlike Tokyo Rose. This woman’s reaching across the aisle is beginning to feel more like a reach-around across the aisle. True friends stab you in the front.

This article is excellent! Validates my thoughts and concerns!

This is what I call a sad article. Gabbard is gorgeous, well spoken and often says impressive things. How I often have wished she could become a moderate democrat and then see the light about how dangerously left her party has gone and perhaps she might consider changing some of her philosophy and even her party. But this article erases… Read more »

She is playing any field she can to gain power. I hate the way people play her up. She didn’t even serve where she could get hurt. She just plays it up that way.She is everything you said plus more atrocious things. The woman has taken lessons from HRC & Pelosi, which in my book, makes her extremely dangerous.