November 12, 2020 – With all the information surfacing regarding claims of voter fraud, it is hard to keep track and know where to begin to report the story. I wanted to create a resource for people to be able to reference containing all of the information to date, updating it as more information comes to light, and lawsuits make their way through the legal system. The president himself has eluded to widespread voter fraud and we have covered Edison Research’s role in this in a prior article. 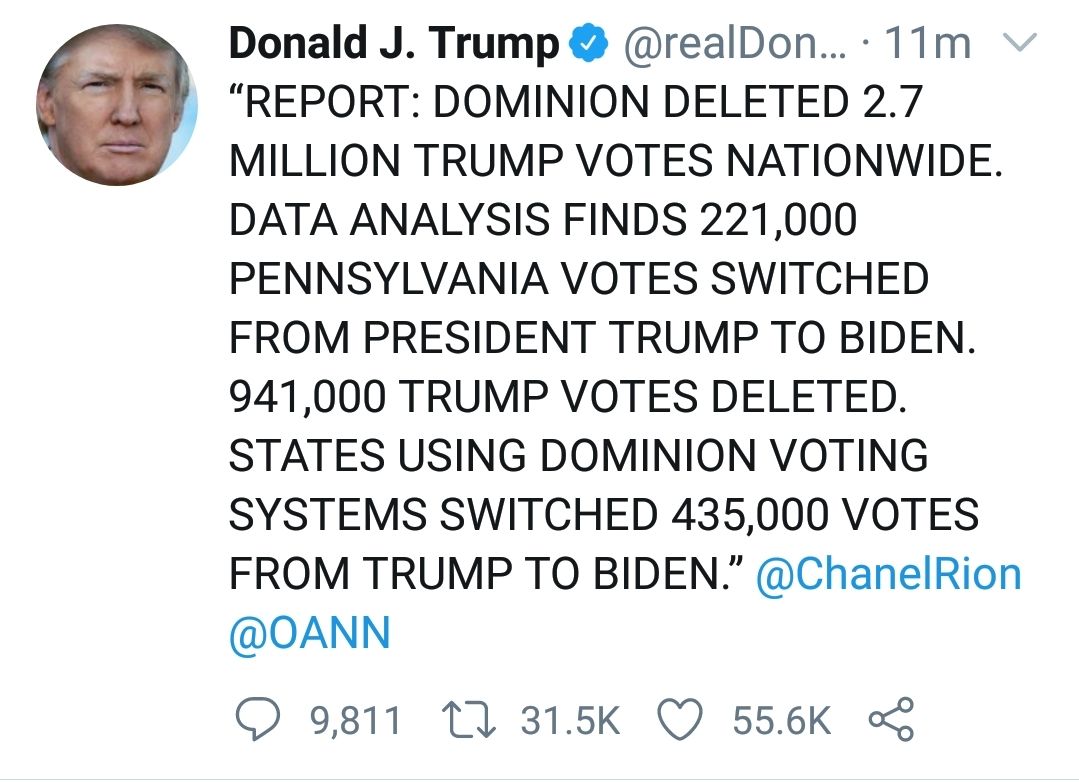 President Trump is quoting Chanel Rion of OANN, who has been covering the many allegations of voter fraud, while most of the mainstream media (MSM) pretends either it doesn’t exist or it is not credible. 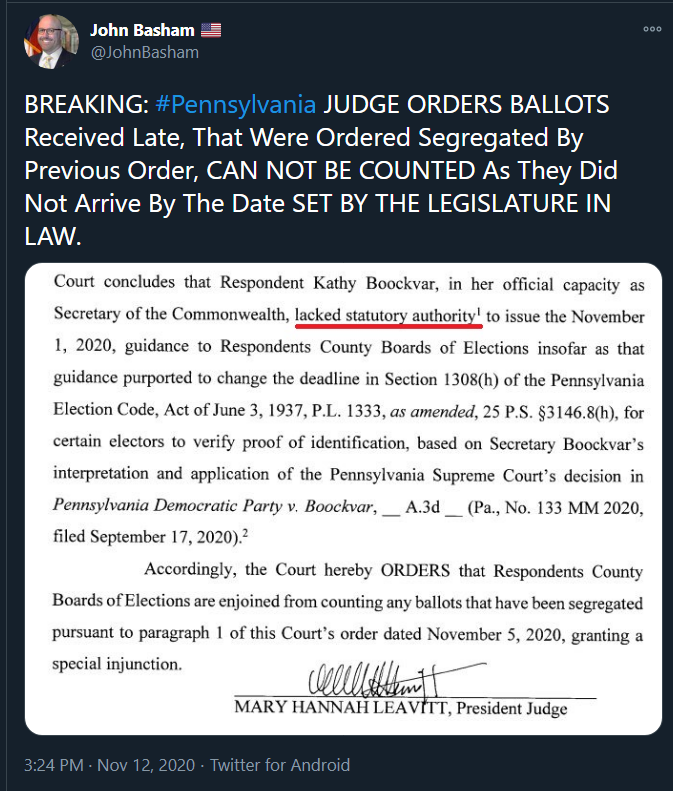 The Court has ruled in favor of the Trump campaign on late ballots that were illegally back-dated.

This man, Harri Hursti has spent the past fifteen (15) years trying to call attention to weaknesses in America’s election and voting systems. He claims that Dominion Voting Systems are exploitable and that votes can be switched.

BREAKING: Eric Coomer has been removed from the Dominion Voting Systems employees on leadcandyhttps://t.co/P1D1mrcGXO Dr. Eric Coomer and Dominion are scrubbing the internet… The problem is we already have a file with ALL OF IT. Share and follow as I drop more. #reckoning

Mr. Joe Oltmann claims they will be releasing more information about Dominion Voting Systems and potential fraud, and that an employee named Dr. Eric Coomer has been attempting to scrub this damning information off the internet.

A Dominion IT contractor and whistleblower, Melissa Carone from Michigan, has come forward to discuss what she claims was “nothing but fraudulent actions taking place” and has signed an affidavit.

The chairman of the FCC has come forward to debunk the claims of the MSM that there is no voter fraud, and yet Twitter has been labeling as “misinformation” or “disputed” the tweets of anyone discussing and exposing this fraud.

Has Pennsylvania ever sent blank ballots to constituents?
If yes, what eventually happened to those blank ballots?

Ron is an IT expert and administrator and has covered some of the potential issues in great detail on his Twitter page. He has offered to brief Rudy Guiliani personally on what he sees as problematic.

Tracy Beanz, the Editor in Chief of UncoverDC has been going through some of the legal cases and in Pennsylvania it appears that Democrat voters were contacted in advance and asked about their votes, which appears to have been illegal.

The statistical case against a Biden win

Trump advisor Steve Cortez has been documenting the irregularities on his Twitter page and discusses the mathematical impossibilities we are seeing with this vote.

He published an op-ed in the National Pulse that further details how improbable a Biden win is, compared with past voting numbers.

BREAKING: #TrumanBlack Has Created A Computer Script That Combs Thru All The Election Data & Identifies Votes That:
"SWITCHED" FROM #TRUMP TO #BIDEN
& Votes "LOST" That Disappeared!
Data Shows ALL SWITCHED Votes WERE TAKEN FROM TRUMP & GIVEN TO BIDEN!
Site:https://t.co/kZBtfnHajR pic.twitter.com/4GFFWV6x1F

John Bashram has provided information put together by a computer scientist who wrote a script to track electronic voter fraud. That information has been compiled here. This shows thousands upon thousands of votes changed from Trump to Biden, or were simply “lost” and made to disappear. I don’t understand how something like this could happen in America.

Here is a rundown of what you need to know and my take on why a similar county level analysis of the 2020 Presidential election could be key in uncovering aspects of exploitation in our voting systems during the 2020 election.

Cultural Husbandry on Twitter has put together an incredible thread looking at election hacking and malware. What they have discovered is shocking.

People will tell you malware is random. It isn’t. His data proves it is targeted.

This shows a correlation between malware and hacking, and elections around the world.

Most of the intelligence collection today is done via cyber espionage. pic.twitter.com/3fDnzq8EtA

One has to wonder if the Dominion machines software, which uses Chinese technology, perhaps was infected with Chinese malware?

For any given nation, there national security requirements in and around elections tend to run in the hundreds of thousands and when things like elections are imminent, new target lists immediately become priority for both the host nation defense and those seeking exploitation.

The U.S. has been a major target for cyber attacks in recent years, with both state and non-state actors becoming increasingly sophisticated in their exploits.

We can see bad actors using a customized and tailored approach.

So, when looking at election malware and potentially “hacking” an election, what would it look like when applied to the United States?

Here is where things get even more disturbing:

Here is the Ohio Special Election in August 2018. This is a few days in and around the election. This includes the entire U.S. with Ohio spikes in purple. These are Trojans which happen to be one of the most common, serious malware detection's. pic.twitter.com/8sf73flKNq

As you can see, the U.S. has been subject to these kinds of attacks before.

These are swing states during the 2018 midterm elections. We see some of the same kind of suspicious activity.

This is an indicator of what kind of attacks may have been employed in 2020.

In NJ we see back doors. Perhaps the exploitation has already been successful because it was a more important election cycle within this state or systems were simply more vulnerable? pic.twitter.com/qVJOV8rUpj

Again, this is extremely disturbing and makes one wonder, how many of our elections have been compromised?

But this same logic applies to internal factions that so dislike Trump that they would stop at nothing to ensure he is gone. https://t.co/vMsJfosdTF

If we know that our elections would be a target for foreign bad actors, why would anyone contest an audit and investigation to make sure that nothing nefarious happened?

And here is NBC confirming that machines are left online both intentionally and unintentionally. The vote does not appear secure.https://t.co/V2EVqjlcEK

Why would Dominion refuse to participate in an event to test the integrity of voting machines?

The Gatway Pundit has published an article looking at the Dominion whistleblower and her claims.

➡️ EYEWITNESSES say Jan 1, 1900 was recorded in poll book as DOB for many not in book so they could count ballots

Press Secretary McEnany has put out a thread documenting all the claims thus far of voting irregularity.

(4/6) ➡️ PASSENGERS dropped off more ballots than people in car

It is sad that the media will not cover ANY of these claims.

Our mainstream media has only mocked and belittled Ms. McEnany, rather than actually engage with the information she has provided. 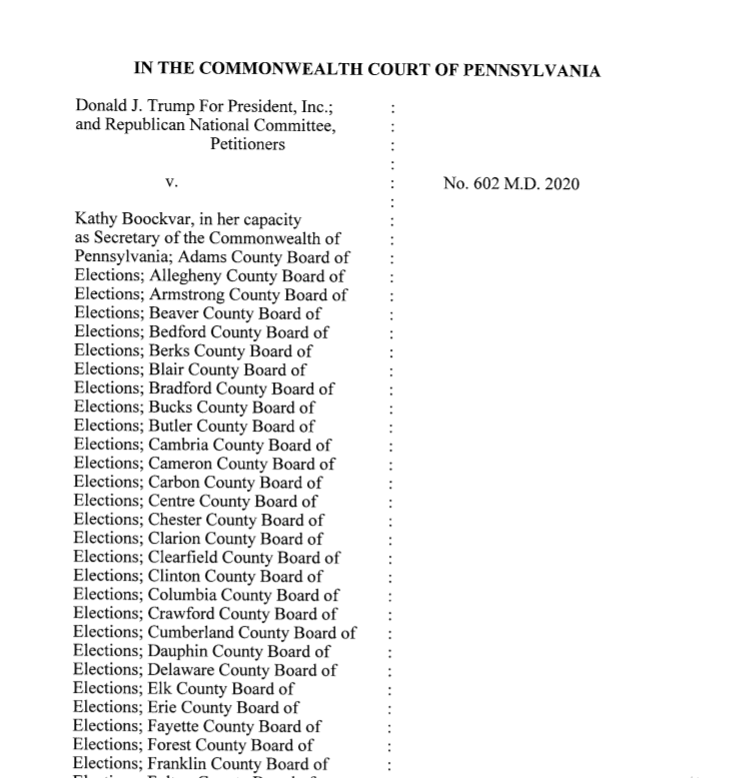 Here is a link to the lawsuit in Pennsylvania. 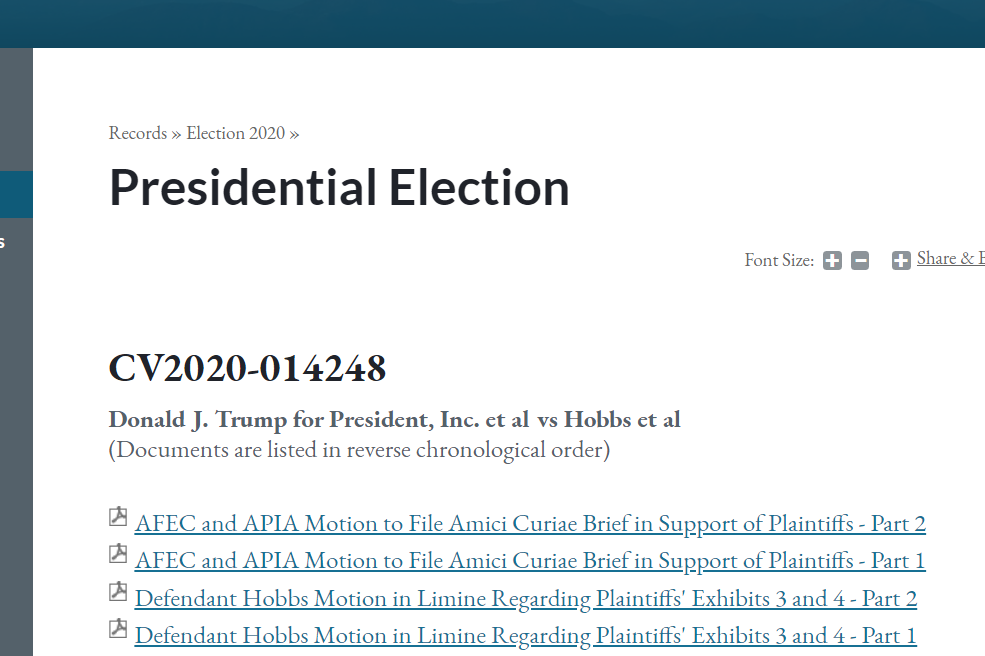 Here is a link to the Arizona Lawsuit. 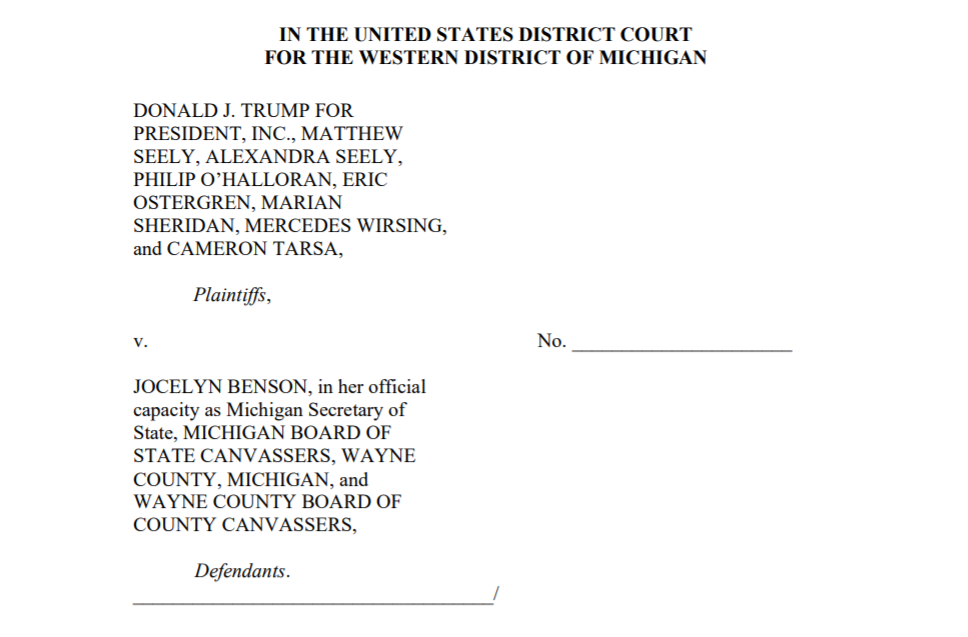 Here is a link to the Michigan lawsuit.

Finally, here is a video from BCP regarding Dominion and possible collusion with China:

We will continue to update this article as more information becomes available.

I WORKED AS A CLERK AT THE VOTING POLLS THIS ELECTION IN SO CALIFORNIA AND HAVE MUCH TO SAY OF WHAT I HAVE SEEN. UNFORTUNATELY, IT IS NOT GOOD IN A NUMBER OF LEVELS, I JUST HOPE I CAN FIND THE TRUSTED SOURCES TO REPORT TO. I WILL DO MY BEST TO DO WHAT’S RIGHT FOR OUR PEOPLE AND STATE… Read more »

Who is Radix Verum or is that just some writer hiding behind a label. That individual or group of individuals seem to be the voice at the Patriots Soapbox.