November 4, 2020 – A massive cyber influence operation is currently underway to delegitimize the results of the election to favor the Joe Biden campaign. While Twitter claims they are working hard to prevent such election interference from happening, they are busy censoring the tweets of President Donald J. Trump, while allowing this massive bot campaign to run its operation unobstructed.

Here is a video showing the copious amounts of these tweets over the course of mere minutes.

This is actually the second massive bot campaign that has been uncovered. Last night a similar operation was discovered that had very similar wording, but used the phrase “tank” interestingly enough, a communist phrase. Here is a screen shot: 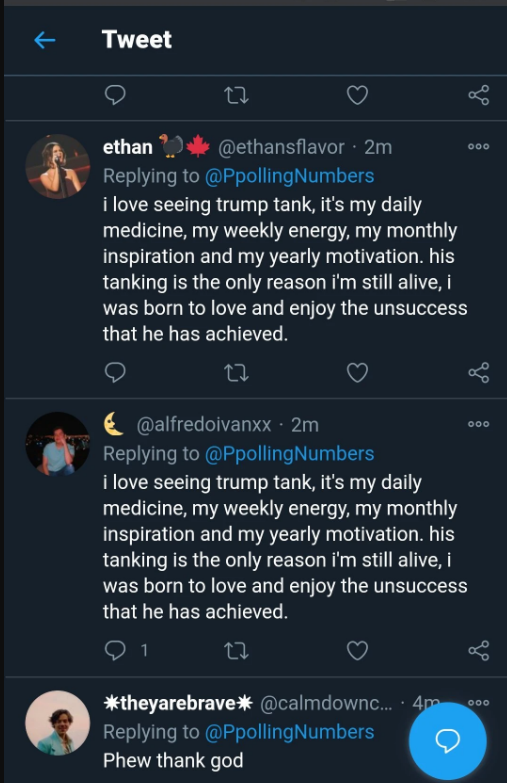 As you can see, these are sophisticated bots that have profile pictures and appear as though they are real, normal people.

The bots are being used to flood President Trump’s tweet responses with what would appear to be “organic” condemnations from regular American citizens. This could not be farther from the truth. We believe China could be responsible for the bot farm and these influence operations to make it appear Trump has less support than he actually does. Case in point:

I love seeing TRUMP lose, it's my daily medicine, my weekly energy, my monthly inspiration and my yearly motivation. His loss is the only reason i'm still alive, i was born to love and enjoy the failure that he has achieved.

Here is one bot that is responding to the president’s tweet about potential voter fraud in key battleground states of Wisconsin and Michigan.

Here you can see how Twitter is actively censoring President Trump under the guise of “election misinformation.” Yet they have no problem boosting and amplifying a potentially FOREIGN BACKED malicious election interference bot campaign: 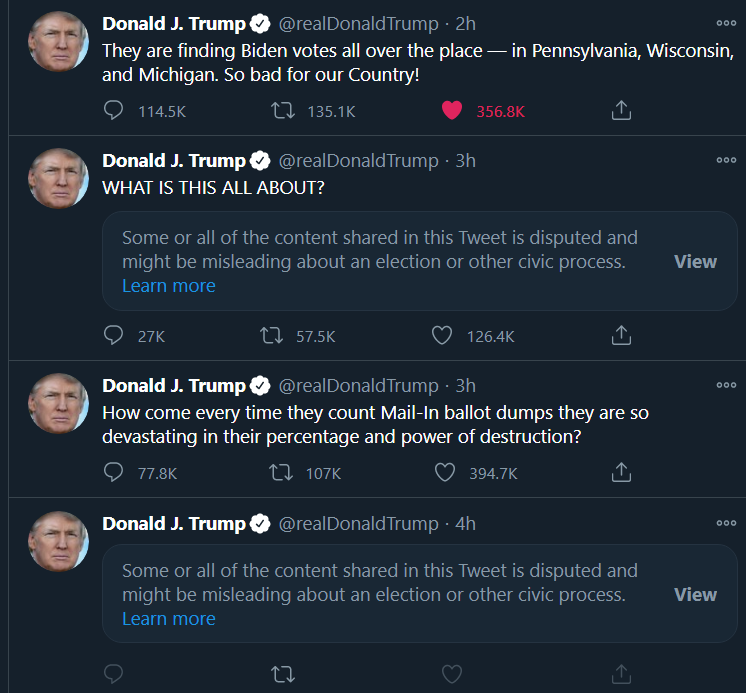 More than a handful of President Trump’s tweets have been censored by Twitter since last night, but apparently foreign-backed influence operations by bot farms are acceptable, as long as they benefit Joe Biden and his campaign.

This may not seem like a big deal, but our investigation has uncovered thousands of these and even modified versions of the same wording that appear to be micro-targeted.

I love seeing TRUMP lose, it's my daily medicine, my weekly energy, my monthly inspiration and my yearly motivation. His loss is the only reason i'm still alive, i was born to love and enjoy the failure that he has achieved.

Here’s another, this one targeting fans of Lady Gaga who was campaigning for Joe Biden:

i love seeing trump tank, it's my daily medicine, my weekly energy, my monthly inspiration and my yearly motivation. his tanking is the only reason i'm still alive, i was born to love and enjoy the unsuccess that he has achieved.

We must ask why Twitter is allowing its platform to be used to promote and boost a foreign-backed cyber influence and election interference campaign.

I love seeing TRUMP tank and flop, it's my daily medicine, my weekly energy, my monthly inspiration and my yearly motivation. His loss is the only reason i'm still alive, i was born to love and enjoy the failure that he has achieved.

WHERE IS TWITTER? Why are they nowhere to be found on this blatant attempt by foreign-backed malicious actors to sow division, chaos and hate in this country? This is clearly being done to try to delegitmize the Republican Party and President Trump.

Our investigation found a third bot campaign, still ongoing, now claiming to be Republicans now leaving their party to vote for Democrats.

The effort afoot here is unlike anything I have ever seen. pic.twitter.com/BkzJ8IMtyP

This is so insidious, and these are just the bot campaigns we uncovered. There could be hundreds of these campaigns going on right now, during a hotly contested and close election. Twitter has shown their hand in censoring the President of the United States but allowing these malicious operations to be boosted and amplified and continue unabated.

We will continue to follow this story, and provide updates if we find any more information.

Do y’all not know what copypastas are ? welcome to stan twitter, not bots lmaoo but nice try???