WASHINGTON, D.C. – Fox News is reporting that U.S. Attorney Jessie Liu is recommending prosecutors move forward with charging Andrew McCabe. The potential charges relate to false statements he made to federal investigators in regards to the FBI’s investigation of Hilary Clinton.

McCabe — the former deputy and acting director of the FBI — appealed the decision of the U.S. attorney for Washington all the way up to Jeffrey Rosen, the deputy attorney general, but the department rejected that request, according to a person familiar with the situation.” – True Pundit

This comes after the Justice Department requested McCabe’s text messages.

.⁦@RepMattGaetz “It is imperative that the DOJ have access to the full universe of Andrew McCabe’s communications — Congress and the American people deserve transparency” DOJ Seeks McCabe's Text Messages On FBI Probe. What Could It Reveal? https://t.co/YpNyZnuhVo

Can confirm according to a source familiar with the matter that line prosecutors in US Attorney's office in DC recommended charges against McCabe. US Attorney Jesse Lieu also recommended. McCabe appealed to deputy AG, who rejected. https://t.co/oHg5mleMxE

All recordings and memos related to Strzok and Page ordered released

Or be held in contempt pic.twitter.com/28km7nmzHD

To be clear, the charges are not related to Andrew McCabe’s role in the spygate scandal, but rather are related to his making false statements to federal authorities, the same charges they used on Papadopolous and Flynn. Tracy Beanz of UncoverDC did a very good break down on the Andrew McCabe situation in all its complexities:

Andrew McCabe: What you should know https://t.co/m91NtFdKMS

There is a question regarding what McCabe was up to in May of 2017 as it relates to the Spygate scandal:

Folks, we might soon read McCabe's texts; especially those over his "Nine Days in May (2017)". We might then match those messages with the table of events in @fullspecdomino's reconstruction and see communications between FBI, Cappotto, Pereno, Italy.https://t.co/THD1Nvyz8X

A good breakdown of what researchers who have attempted to re-construct the timeline have come up with: 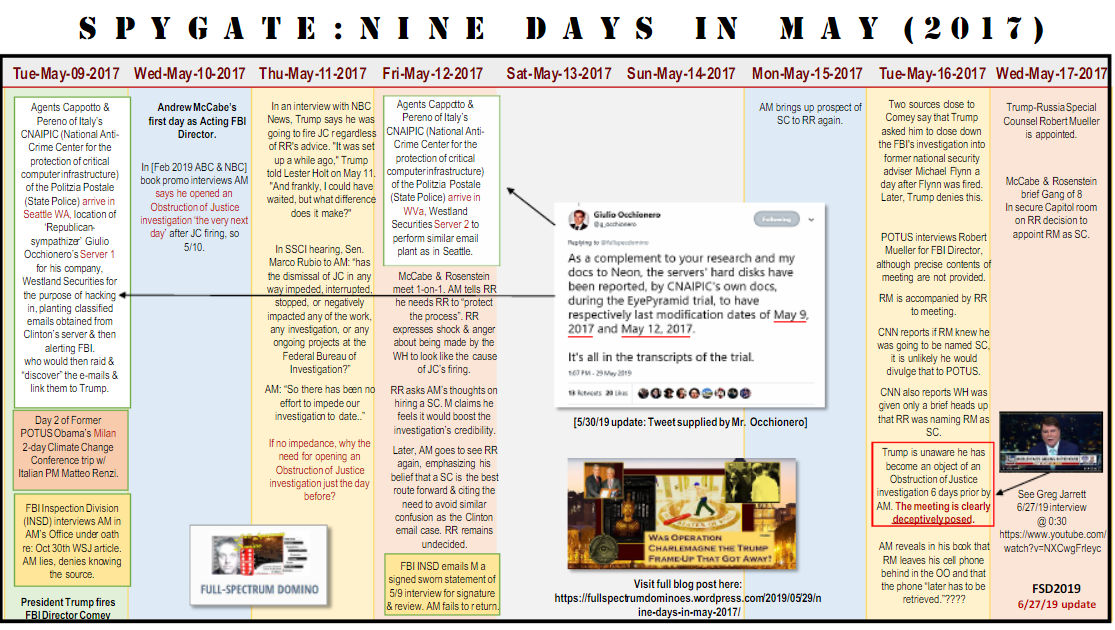 The May 15 timing is suspicious. It's the moment that the Get Trump team went all out to bring Trump down. The OO wiretap, the McCabe attempt to launch an investigation, and the appointment of Mueller, all 15-17 May. Also, the journalists all have Spygate credentials.

According to an investigation by the Epoch Times, Andrew McCabe may soon face indictment:

“Former FBI Deputy Director Andrew McCabe could soon be facing an indictment after the Justice Department rejected his appeal to not pursue criminal charges for lying during an internal investigation.

An appeal from McCabe’s lawyers aimed at preventing a prosecution was rejected by Jeffrey Rosen, the deputy attorney general, two unnamed sources familiar with the matter told The Associated Press. It’s still unclear when federal prosecutors might announce charges.

The Justice Department did not immediately respond to a request for comment by The Epoch Times.

U.S. Attorney Jessie Liu has reportedly recommended moving forward with the charges against McCabe, according to Fox News. Liu, who was confirmed on Sept. 25, 2017, had an extensive background within the DOJ, having served as the deputy chief of staff for the National Security Division (NSD), as counsel to the deputy attorney general, and as deputy assistant attorney general in the Civil Rights Division.

McCabe played a key role in the counterintelligence investigation of the Trump campaign that started in late July 2016, in the midst of the presidential election season.” – The Epoch Times

The Justice Department did not immediately respond to a request for comment by Patriots’ Soapbox. This story is still developing…