ALEXANDRIA, Va. – Stefan Halper made headlines on Wednesday, August 14, 2019, when his attorneys filed a motion to dismiss the defamation lawsuit filed against him. The suit was brought by Russian-born British citizen and historian, Svetlana Lokhova, for planting false stories in the media. The stories allegedly accused her of being a Russian government asset and charge Lokhova with carrying on an affair with General Michael Flynn.  Ms. Lokhova filed the lawsuit in May of this year in U.S. District Court, Eastern District, Virginia, against Mr. Halper, Dow Jones & Company Inc. (Wall Street Journal), The New York Times Company, WP Company, LLC (Washington Post) and NBC Universal Media, LLC (MSNBC) seeking damages of over $25 million dollars.

“colluded with rogue agents of the Federal Bureau of Investigation (“FBI”), with political operatives at Cambridge University, and with “journalists” employed by the Wall Street Journal, the Guardian, the New York Times, the Washington Post and other mainstream media outlets, to promote a narrative and publish statements about Plaintiff, about United States Army General  Michael Flynn (“General Flynn”), and about others – statements that Halper and his confederates knew to be false.”

The motion filed by Mr. Halper’s attorneys assert a rather peculiar defense. They submit that Halper is seeking immunity for being a government agent without officially acknowledging or admitting to his being a government agent. How this makes any legal sense or is germane to a defamation suit is not clear, but nonetheless, he is seeking dismissal on these grounds.  Although it has already become apparent and acknowledged by the FBI that Halper is an intelligence asset, the question that begs an answer is why all the theatrics in trying to cover that well known fact?

Mr. Halper, played a substantial role in the Trump-Russia counter intelligence investigation, code-named Crossfire Hurricane, particularly as it pertained to the FBI’s ability to obtain a FISA Warrant over Carter Page. Halper’s involvement in the investigation played out as follows:

*A full timeline of the Investigation can be found Here

Based on the timeline above, Mr. Halper played a pivotal role in the FBI’s investigation into the Trump Campaign and greatly assisted them in acquiring permission to survey Carter Page. The media commonly refers to Halper as an FBI Informant and Cambridge professor, but neglected to include his background in their coverage. History shows us that Mr. Halper was not just a Good Samaritan who voluntarily provided information to the FBI, but was in fact a long time intelligence asset with well-known ties to the CIA, as indicated by information which came to light during another Presidential campaign. 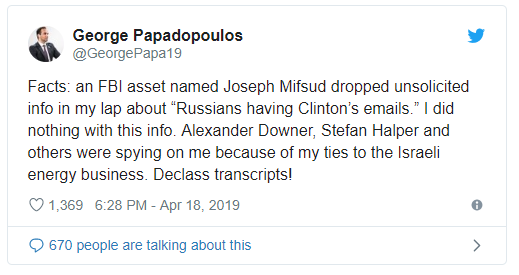 Mr. Halper, the former campaign aide said to have headed the information-gathering operation, nominally worked for Robert Garrick, the director of campaign operations. Mr. Garrick said in a telephone interview recently that Mr. Halper was ”supposed to help with communications, but I kind of thought he had another agenda going -he was always on the phone with the door closed, and he never called me in and discussed it with me.”

Speaking of Mr. Halper, David Prosperi, a former Reagan campaign aide, now with the Superior Oil Company, said, ”He provided us with wire stories and Carter speeches, but people talked about his having a network that was keeping track of things inside the Government, mostly in relation to the October surprise.” 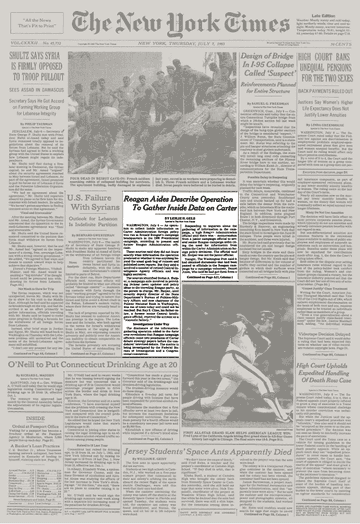 In 1983, Mr. Halper was a 37-year old, who had already worked for two Presidential administrations, Gerald R. Ford’s and Richard M. Nixon’s. Before he joined Reagan’s campaign Halper was hired by George H.W. Bush as an analyst at the urging of Halper’s father-in-law, Ray Cline. Mr. Cline is a former head of the CIA’s Directorate of Intelligence and was Chief Analyst. Cline is the one who determined that Nuclear Warheads were being shipped to Cuba at the beginning of the Cuban Missile Crisis in 1962.

George H. W. Bush, the former Director of Central Intelligence, ended his own bid for President and joined Reagan’s ticket as his running mate. Stefan Halper followed him over to the Reagan campaign. The Times reported in this same article that,

“According to the sources, Mr. Halper worked closely with David R. Gergen on the staff of George Bush when Mr. Bush was seeking the Republican Presidential nomination. The sources said that Mr. Gergen, now director of White House communications, and James A. Baker 3d, another top Bush campaign aide now an assistant to Mr. Reagan, brought Mr. Halper onto the Reagan campaign staff after the Republican convention.

Mr. Bush was Director of Central Intelligence under President Ford, and former Bush aides said today that many former CIA officials had offered their help in the Bush campaign.”

Mr. Gergen at the time denied any knowledge of an intelligence operation going on during the campaign and instead stated that Mr. Halper worked solely on issues and information development. Halper’s father-in-law, when reached for comment about it, dismissed it as a romantic fantasy. His personal secretary, when contacted by the Times through the White House switchboard, hung up when asked for comment on the matter. Although Mr. Halper was never implicated in the “Debate Gate” scandal, his connection to the Central Intelligence Agency was already an open secret in Washington D.C.

After the election, Mr. Halper went on to serve the Reagan White House as Deputy Director of Politico-Military affairs, a position created for him under pressure from David Gergen. Halper served in this role for almost two years before leaving the State Department and taking on a senior advisory role with the Department of Defense; later moving over to the Department of Justice and staying in that role until 2001.

Stefan Halper became the Director of American Studies at Cambridge University in 2004, where he worked closely with Sir Richard Dearlove. Dearlove was Director of MI6 British Intelligence from 1999 to 2004. Christopher Steele served under Dearlove as an MI6 Agent and was referred to by him as his “go-to” for Russian involvement in the commercial sector. Christopher Steele went on to author the now infamous Steele dossier, which also played a substantial role in obtaining FISA warrants to survey Trump aides, eventually leading to the Special Counsel Investigation into Trump’s 2016 Presidential campaign.

By following just one known “informant” we find a strange and convoluted string of coincidences. It begs the question: how many others do we not know about? Russia may have attempted to interfere in the 2016 Presidential election, but as Mr. Halper’s presence in two previous Presidential campaigns has demonstrated very clearly, United States Intelligence agencies interfere in these campaigns as well. The question now before the American people should be: just how much of a role does our Intelligence Community play in the elections of American Presidents each and every election cycle? And most importantly, what happens when they dislike the results of the election?

Perhaps we are in the midst of finding that out.