Social media as well as the mainstream media are ablaze this morning with calls for Flynn to be court martialed over comments he made about the Myanmar coup. 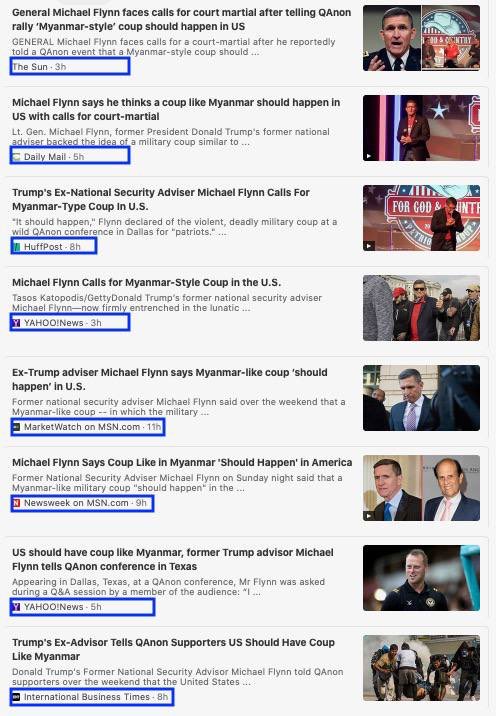 A former Marine in the audience asked Gen. Flynn about Myanmar, where last year the military, claiming election fraud, declared a state of emergency and detained the de facto leader Aung San Suu Kyi. He asked “why can’t something like what happened in Myanmar happen here.” Flynn responded “No reason … it should happen here.”

This statement can be interpreted different ways, depending on who you consult. The Western media refers to the military intervention as a “coup.” But if you ask the Myanmar military they would claim they prevented a Western-backed coup and stopped election fraud. So, in context, it is hard to infer what General Flynn meant by this statement.

Here is the video of former national security advisor Michael Flynn saying that he thinks a coup like the coup in Myanmar should happen in the US. pic.twitter.com/7mGYjfXg18

The media has chosen to interpret his words to mean he is in favor of a coup in the U.S. to remove Joe Biden. But the Military of Myanmar would have said that the CIA and other Western- backed NGOs and tech companies had interfered in their democratic process in order to rig the Myanmar elections to get someone favorable to the West installed. This certainly is not out of the realm of possibility. We know that the CIA has carried out regime change operations to install puppets, all over the world

BREAKING: Michael Flynn advocates a Myanmar-style military coup here and GOP has begun its Putsch to overthrow Democracy in Texas.

Flynn must be arrested, a 1/6 Special Prosecutor named, and Republicans treated as the terrorists they are.

Olbermann is practically hyperventilating over the comments, and typically, he’s using them for his own political agenda. He cannot help but be a partisan hack.

Here is video of former general and National Security Advisor Mike Flynn calling for a Myanmar-like coup to replace the sitting U.S. president with Donald Trump. The talk of war is very real. pic.twitter.com/1GoP5OG1He

If I were the mainstream media, I would ask Flynn to clarify what he meant.

Flynn walks with the veteran to meet his wife and family at ‘For God & County Patriot Roundup’ pic.twitter.com/1MC8rAFBf7

Flynn met with a WWII veteran at the God and Country event and he discussed his concept of “digital soldiers” as well as the importance of staying informed on current events.

General Flynn has launched a podcast site and if you read between the lines, you might conclude that he is considering a run for office in the near future.

And, in this just released a statement on his Telegram channel, General Flynn addresses the news stories blaring out from the mainstream media this morning. In no uncertain terms, he wrote:

Let me be VERY CLEAR – There is NO reason whatsoever for any coup in America, and I do not and have not at any time called for any action of that sort.
Any reporting of any other belief by me is a boldface fabrication based on twisted reporting at a lively panel at a conference of Patriotic Americans who love this country, just as I do.
I am no stranger to media manipulating my words and therefore let me repeat my response to a question asked at the conference: There is no reason it (a coup) should happen here (in America).

It is General Flynn’s contention that the media twisted his words.
You can see the full video of his speech from the rally below:

You can watch and decide for yourself, we trust that you do not need us to insert our own slant or potential bias onto this story.