October 19, 2020 – The Second Circuit Court of Appeals has affirmed a lower Court’s order to unseal documents related to Ghislaine Maxwell’s civil case, in re: Brown vs. Maxwell, including an allegedly incriminating deposition.

A federal appeals court dealt Ghislaine Maxwell, the alleged madam to disgraced financier Jeffrey Epstein, twin blows late Monday by declining to consolidate her appeals in numerous overlapping cases and striking down her effort to thwart release of a controversial deposition she gave in a now-settled civil lawsuit.

The three-judge Court of Appeals for the Second Circuit held more than two hours of oral arguments last week, and issued a succinct Monday afternoon order holding that a lower court judge did not err in order the release of a 418-page deposition from April 2016 that could shed new light on the Epstein empire.

‘We have reviewed all of the arguments raised by Defendant-Appellant Maxwell on appeal and find them to be without merit,’ the judges wrote, also turning away a request for consolidation with Maxwell’s criminal case in the Southern District of New York. ‘We DENY the motion to consolidate this appeal with the pending appeal in United States v. Maxwell.’

The ruling affirmed a decision over the summer by U.S. District Judge Loretta Preska to release hundreds of documents from a 2015 civil suit involving Maxwell and Epstein accuser Virginia Roberts Giuffre. The case was settled in 2017 and the Miami Herald sued for the release of the documents following its groundbreaking November 2018 Perversion of Justice series, which spotlighted how Epstein escaped serious punishment despite widespread accusations that he sexually abused underage girls. Epstein was arrested in July 2019 and found dead in a jail cell the following month, determined to be a suicide. – The Miami Herald

We have previously reported on the Maxwell family connections to international intelligence and espionage rings.

"The District Court’s order articulated and applied the correct legal framework in its individualized review of the materials to be unsealed."

Maxwell had just brought on another attorney who has a top secret Senate Select Committee on Intelligence (SSCI) clearance, adding credence to the notion that Epstein and Maxwell were “connected to intelligence” as then U.S. Attorney (Miami) Alex Acosta put it in the Epstein case in 2008. 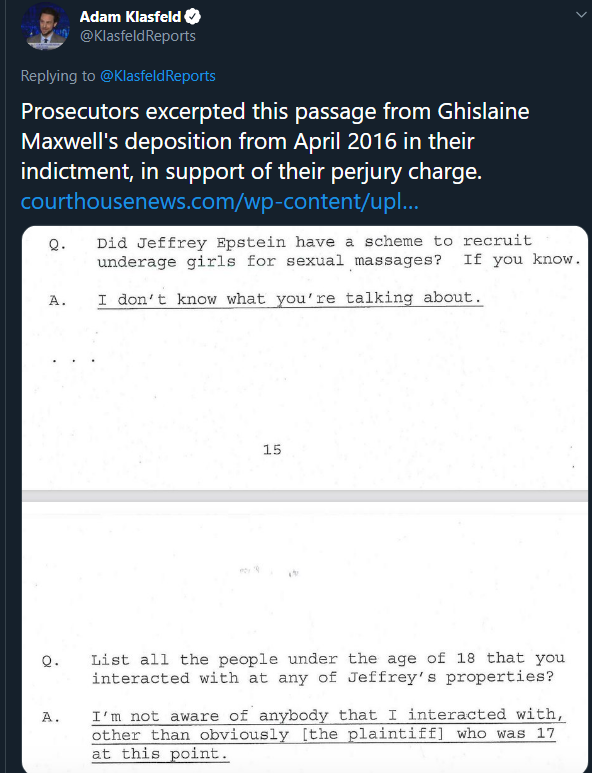 Things are heating up for Maxwell who, unlike Epstein, has so far survived her arrest and confinement.

The 2nd Circ. unanimously affirmed an order rejecting Ghislaine Maxwell's "meritless arguments that her interests superseded the presumption of access,” paving the way for the release of her allegedly incriminating deposition.

This sealed information could be incredibly damning and could offer a closer look at how the Epstein-Maxwell operation worked.

The Deposition, once unsealed will be available here.

She fought to prevent the release of two depositions she gave in 2016. An appeals court had other ideas.

They ruled Ghislaine Maxwell’s testimony under oath about her knowledge of Jeffrey Epstein’s sick underage sex trafficking scheme should be unsealed.https://t.co/GBjUKSiaz3

A friend of Jeffrey Epstein told us that Ghislaine Maxwell, Epstein’s “right-hand woman,” helped run his “sexual production line”: “She needed to be essential for him, [recruiting girls] is how she kept her place, she had value for him…she ran his house.” https://t.co/fWInZOgr4f

According to a Mother Jones piece, an Epstein associate claims Maxwell was his right hand partner in crime, and that she was just as complicit in the scheme as he was.

Mainstream media has done such an astounding job with the Jeffrey Epstein & Ghislaine Maxwell case that very few people even know Alexander Acosta said Epstein was "above his paygrade, belonged to intelligence and to leave him alone."

Epstein was not a lone ranger. He had help.

Kirby Sommers has been covering the Epstein and Maxwell cases, and I highly recommend her book about Jeffrey Epstein.

The meetings with SDNY will likely be scrutinized as Ghislaine Maxwell fights to keep her depositions secret. Victims’ attorneys had urged the feds to pursue perjury and perjury conspiracy charges against Epstein and his alleged madam, sources say.

Stephen Brown of the New York Daily News reports that the U.S. Attorney in Southern District of New York (SDNY) DECLINED to pursue charges against Jeffrey Epstein and Ghislaine Maxwell back in 2016. Preet Bharara, the U.S. Attorney at the time, claims he was not informed about the meetings and denied he had anything to do with this.

We will continue to keep you updated on the case, as the deposition is unsealed.