June 5, 2021 – Glenn Greenwald recently sat down with Jaime Rogozinski, the founder of Wall Street Bets to discuss the movement that has sprung up around the internet forum that has made a massive impact on the market. The media seized on the GameStop Stonks episode to try to smear these working class people from all over the world as “right wing extremists,” in an attempt to politicize the movement.

Rogozinski says that is disingenuous as the people who participated in this movement are from all walks of life and different political backgrounds, from around the world. He maintains that Wall Street Bets transcends ideology and was in essence similar to the Occupy Wall Street movement, as both  essentially were born out of a class struggle. The desires of the younger generation were harmed by the 2008 financial crisis, and both were formed to hold these Wall Street hedge funds accountable and/or to beat them at their own game.

Screen Shot of the Subreddit

The above image is a screen shot of the subreddit from the forum, r/WallStreetBets after it was restored by Reddit, following outrage from the banning of the forum in the midst of the GameStop chaos. 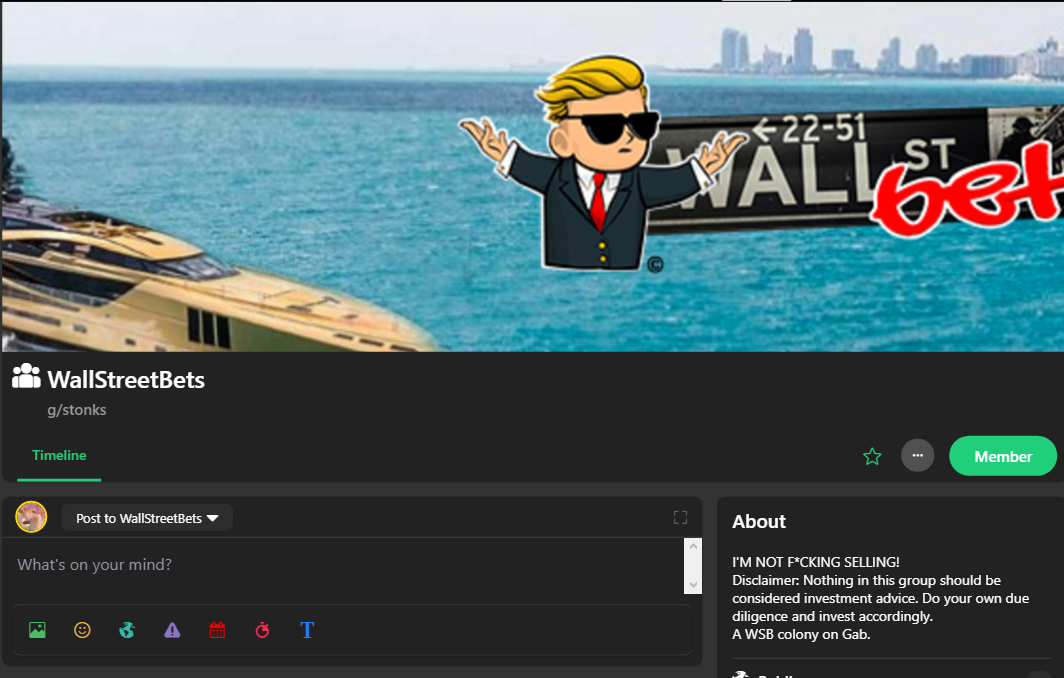 After Reddit banned and censored the group, a Gab group was created that currently has around 28 thousand members, whereas the subreddit has around 10.3 million users.

Following are some examples of the sort of insights posted to the subreddit. Here you can find credible expertise and talent from regular people who the ruling class see as the “unwashed masses” and assume are stupid.

I analyzed all the controversial trades made by Senators in the 2020 Congressional insider trading scandal. Here are the results! from wallstreetbets

One interesting post made by user Nobjos analyzed the stock trades of members of Congress that showed some very disturbing things. It appears that these politicians are benefitting financially from inside information concealed from Retail and Institutional investors.

Glenn Greenwald wrote about his interview with the founder of r/WallStreetBets:

Major Wall Street hedge funds in January were shaken to their core by a band of anonymous users of a subreddit that now has more than ten million members. Users of that internet group, called r/WallStreetBets, had identified large amounts of short-selling bets placed by some of the nation’s most powerful hedge funds on the video game retailer GameStop. They then began collectively buying the stock to massively boost its price and sabotage the short-sellers’ positions. At least one major fund, Melvin Capital, lost half its assets, while others reportedly lost billions. On the other side of the ledger, at least some small investors became wildly enriched at the expense of those financial titans.

When writing and producing a video about that episode in late January, I called it ‘one of the most interesting and potentially significant events — not just financially but culturally and politically — to happen in some time.’ While the obvious David v. Goliath narrative may not have been pure — there were of course large institutional investors who jumped on the GameStop wave along with the subredditors; short-sellers can perform a healthy function as well as a predatory and destructive one; and some small investors lost more money than they likely could afford — there is no question that what they did was disruptive and threatening to one of the world’s most formidable power centers, as evidenced by the near-panic that set in at CNBC, the media epicenter of corporatism and Wall Street reverence. Mainstream discourse contained numerous explicit expressions of rage over the fact that the wrong people were manipulating the Wall Street casino.

One of the other stocks identified at the time by r/WallStreetBets as having been targeted by institutional short-sellers was the movie theater chain AMC Entertainment. Now, that stock has ‘more than quintupled in the last month and increased more than 30-fold since the start of the year.’ It is tempting but overly-simplistic to assume that the same dynamics are at play with AMC as the ones that drove the GameStop explosion in late January. There are other factors driving up AMC’s price, but there is no denying that the same subreddit has played a significant role in yet again thwarting institutional short-sellers. As CBS News noted in January when reporting on GameStop, ‘Wallstreetbets members appear to be widening their aim to focus on other companies that, much like GameStop, the rest of Wall Street has left for dead,’ causing ‘troubled movie chain AMC [to] have also soared in January after mentions on the Reddit board.’

Whatever the complexities are of both the GameStop and AMC dramas, the subreddit has become a powerful force and, to hedge funds and institutional short-sellers, a menacing one. Its political ethos is fascinating because it is, at once, vague, heterodox, trans-ideological, defiant, hilarious and anti-establishmentarian. However one tries to define it, it is far more than merely mercenary. It has a purpose beyond profiteering and is driven by collective action, which are two of the factors that make it so unpredictable and uncontrollable and therefore alarming to institutional power.

Founded in 2012, the year after the Occupy Wall Street movement was vanquished without much difficulty, the subreddit has exploded in both membership and impact. Its creator is Jaime Rogozinski, whose life — now married with two children and living in Mexico City — radically diverges from the crude media stereotypes of the group as populated by alt-right incels sprouted from 4Chan. With r/WallStreetBets now proving it is capable of far more than the one-hit record of GameStop, I sat down with Rogozinski on Friday on a new edition of SYSTEM UPDATE for a wide-ranging and thought-provoking discussion about the politics, ethos, function and future of the platform he created but does not control. – Glenn Greenwald

You would assume with the similarities to the Occupy Wall Street movement, more Leftists would have been interested in the movement. While some are, many left wing commentators tried to turn it into a political thing, rather than a class uprising. They characterized it as a right wing thing, and claimed it was not a real “revolutionary” movement. And yet WallStreetBets did far more damage to Wall Street than the impotent Occupy movement which for two months merely trashed a private park with their foul and dangerous camp, while holding up signs.

Wall Street Bets actually cost hedge funds and short sellers money, unlike Occupy. That is what made them so effective, and perhaps the Left finds this embarrassing. In any case, this is a class movement that goes far beyond false dichotomies and false categories like Left vs Right, red vs blue. Those categories were created by the ruling class to divide the poor and working classes and turn politics into a wrestling match of equally impotent adversaries.

Here is the full video of the interview, just under 50 minutes, and it is well worth listening the entire conversation.