November 21, 2019 – After Ukrainian Prosecutor General indicted Burisma owner Nikolai Zlochevsky this week, it is being reported that Zlochevsky has now gone missing. According to the Gateway Pundit:

Ukrainian MP Alexander Dubinsky said in a presser Wednesday that he will reveal information about a ‘pyramid scheme’ created in Ukraine using stolen funds, moved offshore and ‘bought Ukrainian public bonds turning them into the Ukrainian sovereign debt.’

Joe Biden’s drug addict son Hunter was sitting on the board of Burisma Holdings, a Ukrainian natural gas company and being paid by some accounts over $200,000 a month even though he had zero experience in the field.

According to Reuters, the investigation is on hold because Zlochevsky has gone missing! – The Gateway Pundit

Graham said the phone calls coincided with the time frame in which a Ukrainian prosecutor, once praised for going after the head of natural gas company Burisma Holdings – a person Graham said was known as the  ‘dirtiest guy in Ukraine’ by one top American official – was fired.

‘I want to know are there any transcripts or readouts of the phone calls between the vice president and the president of Ukraine in February [2016] after the raid on the gas company president’s house,’ said Graham.

‘After this raid, Hunter Biden kicks in. Hunter Biden’s business partner meets with [then-Secretary of State] John Kerry, and Vice President Biden on three occasions makes a phone call to the president of Ukraine and goes over there in March and they fire the guy, and this is the same man that the ambassador wanted investigated in 2015.’ – Zero Hedge

It was also reported back in September 2019 that Ukraine was launching a probe into a military sale by fundraiser for Adam Schiff. Liberty Unyielding reports:

Although the widely-cited 2013 fundraiser was in Washington, D.C., Igor Pasternak’s company headquarters is in Montebello, California, on the east side of Los Angeles.  It’s near Schiff’s CA-28 congressional district, which lies to the north of it and encompasses major suburbs like Burbank and a chunk of Glendale.  Pasternak started the company in Ukraine in 1992, but immigrated to the U.S. in 1994 and established his California-based company, Aeros/Worldwide Aeros Corporation, shortly thereafter.

Aeros makes lighter-than-air (LTA) airships via its Aeroscraft arm.  That is its signature niche in the general aviation industry as well as its entrée to defense contracting.  Aeros has had contracts with the U.S. Defense Department to develop surveillance airships and cargo-delivery airships.  Pasternak, an engineer by training, has had a lifelong interest in what can be done with LTA vehicles.

The story about him as it stands right now is that he did little, if anything, in Ukraine in the 20 years between 1994 and 2014 (links below).  Then, when the Maidan Revolution erupted in Ukraine in late 2013 and early 2014, he went back to Ukraine and started cultivating ties with the defense industry there.  At that point, as is obvious from the document announcing the 2013 fundraiser, Pasternak was already giving aid and comfort to Adam Schiff. – Liberty Unyielding

So we have Adam Schiff involved in fundraising efforts with a well known Ukranian oligarch going back to at least 2013. We now know that Nancy Pelosi’s son Paul was also doing business in the country as reported by Patrick Howley.  The articles continues:

In the course of establishing project-worthy contacts in Ukraine, Pasternak’s Aeroscraft had a couple of scores that, from the Aeros perspective, were big ones.  One is a joint project with an Ukroboronprom subsidiary industry group, Ukroboronservis, to produce a Ukrainian version of the M4 used by the U.S. armed forces (here and here).  That project is eye-catching because it involves producing rifles – not something Aeros has had a background in.

It’s a thing that makes you go, Hmm: inherently dubious, and on the face of it, one of the hallmarks of cronyism, like Hunter Biden being put on the board of an energy company when he has zero background in the field.

Perhaps it’s just a new tack for Aeros, into which Pasternak is putting zeal, energy, and investment dollars.  But it’s easy to imagine there were at least half a dozen other U.S. companies it would have made more sense to build NATO-ready rifles with.  (I’ve been unable to determine if Aeros simply subcontracted with one of them, and functioned chiefly as a go-between because of Pasternak’s Ukrainian background.)

The second project was right up Aeros’s alley, however.  It involved designing and installing an aerial surveillance infrastructure for a section of the Ukrainian border, in conjunction with another Ukroboronprom enterprise, SpetsTechnoExport.  Aeros had been working on such a project (link above) using aerostats, for the U.S. DOD.  The network installed in Ukraine ended up being mounted on towers in Mariupol, overlooking the Sea of Azov, rather than being deployed in an aerostat flotilla.  Petro Poroshenko, then president of Ukraine, was there for the inauguration ceremony of this border surveillance system in January 2017.

It seems doubtful that President Trump knew about this relatively obscure development when he had his 25 July phone call with President Zelensky.  But it’s a strong bet that a lot of Democrats in the U.S. knew (such as political activist Alexandra Chalupa and her Ukraine-embedded network, which was so active in seeking dirt on Trump during the 2016 campaign).  As the link above indicates, Igor Pasternak had already posted a statement about the investigation at the Aeros company website (the date of the statement is 24 July). – Liberty Unyielding 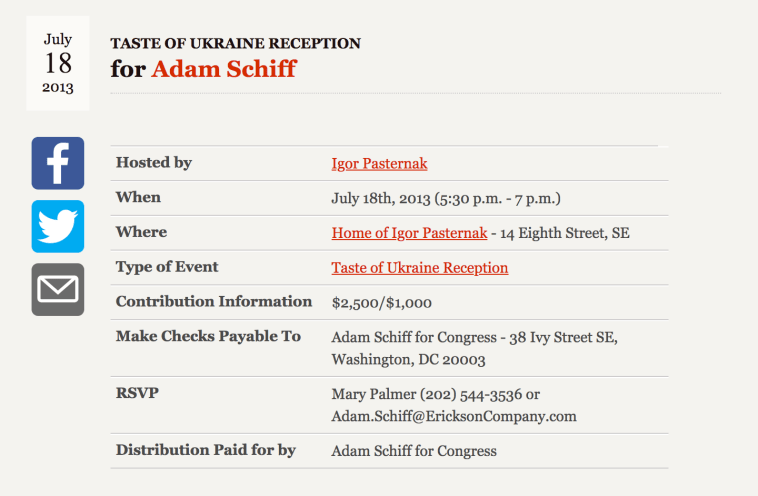 The military sale of the Javelins is NOT military aid to Ukraine. The Javelin missiles have never been part of any military aid package; it was a sale. The fact that a fundraiser for a top House Democrat (Schiff) found his company’s arms sale to Ukraine under investigation there in July 2019 would seem to be of major importance in this whole impeachment ‘inquiry,’ and whether or not Schiff has a potential conflict of interest. Until he is deposed under oath, we can only speculate.

Now we’re getting to the meat of the entire Ukraine impeachment debacle. Children of the democrat leaders involved and their parents in it as deep as the swamp goes. Senator Graham, please… let’s get this investigation going in the Senate. … not that MSM will report it to the unaware listening to their networks.

What a joy to see even bits of light shining through! Stand strong Patriots and Believers, JESUS AND POTUS have this no matter what. TY PSB team!!

The quid pro quo succeeded. It was the surrender of Trident Acquisitions, our best hedge against Russia’s Ukraine power moves; it was autonomy for the Donbas.
Free Ukraine is very much weaker now.