Jeffrey Epstein, the billionaire accused of underage prostitution in the U.S. and who died August 10, 2019 in the Manhattan Correction Center in NYC under mysterious circumstances, may now be investigated in France.

Ghislaine Maxwell, daughter of the disgraced media mogul Robert Maxwell, has not been seen since 2017 when she failed to appear in a US court. According to Page Six, she was supposed to turn over any correspondence between her and Jeffrey Epstein and any documents that mention the sex-trafficking ring she and Epstein allegedly operated between 1999 and 2016.

At the time her lawyers stated that they did not know her whereabouts but that she may be in London.

“As questions continue to mount, the socialite’s whereabouts are not publicly known. She has addresses linked to residences in Salisbury and in London, but her flashy Manhattan townhouse – off high-end Madison Avenue – was sold for $15 million in 2016, and she is thought to have moved back to the U.K. the following year.” Fox News

When searching for Guislaine Maxwell you will get a notice that states she is on a Watch List by the U.S. DOJ, FBI, CIA and Interpol. 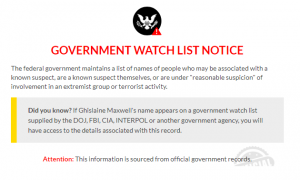 “The American investigation has highlighted ties with France. It therefore seems fundamental to us, and for the victims, that an investigation should be opened in France so that all the light is shed on this matter,” France’s Gender Equality Minister Marlène Schiappa said in a joint statement with the child welfare minister, Adrien Taquet.

“Epstein’s death must not deny his victims the justice they are entitled to,” the ministers added, noting that an investigation would help ensure young women are given better protection in future. “We would like to use this occasion to highlight again our utmost determination to protect young girls from sexual violence and especially from being exploited by criminal networks, and this should result in new measures being announced during the final quarter of this year,” Schiappa and Taquet wrote.”

French Ministers Shiappa and Taquet were called to task by the Justice Minister Nicole Belloubet who stated:

” it was not the government’s responsibility to initiate investigations. Since 2013, investigations started individually are forbidden, in compliance with the principle of judicial independence,” Belloubet told AFP.

On July 6, 2019, Epstein was returning from France when he was arrested at Teterboro Airport in New Jersey on sex trafficking charges. Epstein owns an apartment in Paris, France at 22 Avenue Foch, Apt 2DD.

“Property records obtained by ABC News show that he purchased multiple properties within that building, through a real estate entity called JEP, for about 1.5 million euros in 2002 and added an additional property in 2004 for just 20 euros.” 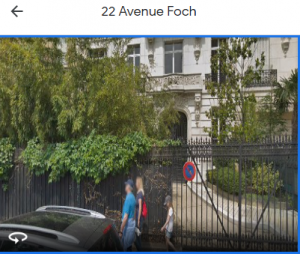 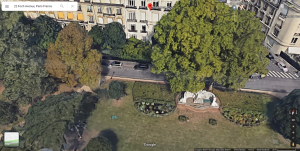 Ms. Maxwell was born in Maisons-Laffitte, France in 1961. Two of Ghislaine’s siblings died young,  Michael died in 1969, at age 23, eight years after being seriously injured in a car crash; and a sister, Karine, died from leukemia at three years old in 1957.

All 9 Maxwell children were delivered by their mother’s sister, Dr.Yvonne Vittoz in Maison Laffitte, Paris France, and are all dual citizens of both France and Britain.

“Before her father’s death, Maxwell had already started building her credentials as a British socialite and philanthropist; she founded the Kit-Cat Club, a social organization for working women, and also served as director for a football club her father owned. Following her father’s passing, however, she moved to the United States, eager to escape the scrutiny of the U.K. tabloids. While she started out working in real estate and living on the (relatively) modest trust fund sum of $100,000 a year, Maxwell quickly rebounded from her father’s passing and subsequent disgrace, according to a 2000 New York Post profile, relying on the Maxwell family’s powerful network of famous friends to regain her position in the social world.”

Ghislaine Maxwell may very well be the one person who can bring to light the entire sex trafficking operation she and Epstein allegedly operated from France to New York, the Caribbean and New Mexico.

What are the odds of Epstein being in France just prior to his latest arrest? Ms. Maxwell has familial ties to both France and the UK. Ms. Maxwell could very well have all the documentation of their ‘Honeypot” operation.

Did Epstein meet with Ghislaine in France? Did they conspire to either destroy the evidence of their crimes, or is it more likely to make plans for the evidence to be released in case of their deaths?

Could Ghislaine be even now, negotiating with authorities either here in the U.S. or in Europe, with French, U.K. or with Interpol, for leniency?

Ms. Maxwell is very likely running for her life.

“Ghislaine is irreversibly tied to Jeffrey Epstein and his public image. Ms. Maxwell can never erase the stain of being seen as the enabler of Jeffrey Epstein. No matter what happens in the court of law, she is thought of as guilty in the court of public opinion,” Torossian added. “I don’t believe there is a reputable public relations agency in the United States that will work with Ghislaine Maxwell. She won’t redeem her name in this city.” per Ronn Torossian, crisis communications expert and CEO of the Manhattan-based firm 5WPR

Where could Guislaine Maxwell be?

Perhaps authorities are looking into her family and their connections…

Isabel, 69, is most notable for being the co-founder of Magellan, an internet portal. She also delved into film and television producing documentaries from 1975 to 1984.  She is presumed to be living in the UK.

Christine, Isabel’s fraternal twin, who co-founded Magellan with her sister is presently the Program Manager of Learning Technologies at the University of Texas in Dallas, Tx.

Anne, 62,  is said to be a hypnotherapist in Surrey, UK, practicing under another name.

Phillip, 61, is living in a tiny flat (apartment) in London is trying his hand at writing.

Kevin, 60, presently resides in the UK while collaborating with his brother Ian on their “Combating Jihadist Terrorism” think tank.

According to Fox News;

“Once an aspiring marine biologist, Maxwell went on in her adult life to earn licenses to pilot submarines, helicopters, ROVs and AUVs – which she described in interviews as “remote and tethered vehicles off the back of boats for doing underwater exploration.” Maxwell was also known to have become a qualified emergency medical technician and was fluent in several languages. She no longer holds an FAA certification despite once being listed as a licensed pilot.”

Which means, that Ms. Maxwell has the talents to go virtually anywhere.