As news swirls around former Vice President Joe Biden and his son Hunter, there is another name we don’t seem to hear much about despite his role not only at Burisma, but in his partnership and involvement with Hunter and his dubious business dealings abroad. Devon Archer is the man pictured in the now infamous photograph that first appeared on the September 30, 2019 Tucker Carlson Show playing golf in the Hamptons alongside Joe and Hunter Biden.

The Brooklyn-born Devon Archer entered the scene when he became the college roommate of John Kerry’s stepson Chris Heinz at Yale. They remained friends after graduation and Archer went on to become a fundraiser and campaign advisor to John Kerry during his bid for President in 2004. In the summer of 2009, Chris Heinz and Hunter Biden came together to open Rosemont Capital, an investment firm which is the parent company of Rosemont Seneca Partners, LLC, a private equity firm among several other offshoots under the Rosemont Capital Umbrella. Devon Archer was brought on shortly after as the “Managing Partner” for the firm.

The New York Post ran an exclusive story taking a deeper look into the background of Rosemont Capital and their subsidiary Rosemont Seneca Partners, LLC. Hunter Biden secured a deal for the private equity investment firm with a Chinese Government-backed bank during his trip to China with Joe Biden in 2013. In May of 2011, when Rosemont Seneca Partners was barely a year old, Hunter Biden and Devon Archer ventured to China to explore commercial investment possibilities. Joining Rosemont in this venture was another partner firm named the Thornton Group. The Thornton Group is a Massachusetts company whose board members include Billy Bulger, nephew of the infamous gangster Whitey Bulger and former Massachusetts State Senator who was a long time political ally of John Kerry in the Bay State.

Despite being a small and new private equity company, Rosemont Seneca Partners alongside the Thornton Group had gained unprecedented access to the big players in the Chinese financial world. This meeting took place just hours before then-Vice President Joe Biden was meeting with Chinese President Hu in Washington D.C. for a Nuclear Summit. A few weeks later, Archer and Hunter Biden were in another meeting that took place in Taiwan with many of the same Chinese financial big leaguers. This coincidentally took place just a couple of weeks after Vice President Joe Biden engaged the Chinese Government in strategic dialogue with the U.S.

In December 2013, Hunter Biden joined his father on a trip to China aboard Air Force 2 as the Vice President began to carry out the Obama Administration’s pivot to Asia. Ten days later, Hunter’s Rosemont Seneca inked a deal with the Bank of China for a 1 billion dollar investment fund called the Bohai Harvest RST, later known as BHR. (The RS stands for Rosemont Seneca and the T for Thornton Group.) This became a very lucrative deal for both Heinz and Biden. There is much to be said on this particular subject, particularly regarding potential national security concerns. However our focus for this story is Devon Archer. If you would like to read more about this you can read the New York Post story here.

As reported by Steve Hilton of Fox News, in early 2014 Devon Archer joined the Board of Burisma Holdings. On April 16, 2014, Mr. Archer had a private meeting with then-Vice President Joe Biden at the White House that reportedly continued late into the night. Two days later, Hunter Biden joined Devon Archer as a board member of Burisma. The Ukraine Natural Gas Company, Burisma, was under investigation at the time by the UK Government for a money laundering scam that was ultimately dismissed on a technicality. A mere three days later, Vice President Biden pledged U.S. taxpayer funds to aid the Ukrainian Gas Industry.

When news of Biden & Archer joining the Board of Burisma went public in May of 2014, their Rosemont Capital partner Chris Heinz acted quickly to cover himself and his company. Heinz fired off an email to Matt Summers and David Wade at the State Department who were top aides to his stepfather, then Secretary of State, John Kerry.  According to the Washington Examiner, the email authored by Heinz stated:

Apparently Devon and Hunter both joined the board of Burisma and a press release went out today,” wrote Heinz. “I can’t speak to why they decided to, but there was no investment by our firm in their company.

Taking it a step further, Heinz immediately undertook actions to disentangle himself from Rosemont Seneca Partners, LLC and completely separated himself from the company, and Archer and Biden by 2015. It would seem Heinz saw the writing on the wall here.

Shortly after Archer (a premier fundraiser for John Kerry) and Biden joined Burisma, some $90,000 was funneled to a lobbying firm named ML Strategies which is run by John Kerry’s former Chief of Staff David Leiter. As Fox News host Steve Hilton reported, Leiter’s organization made campaign donations of almost $60,000 to Democrats.

Those donations included Senator Ed Markey, Democrat from Massachusetts and Democrat Senator Jeanne Shaheen of New Hampshire. They were two of four Senators who authored a letter to then-President Obama calling for providing the full resources and expertise of the U.S. Government to help build and improve Ukraine Energy.

Burisma responded to the letter with the following statement:

Burisma holdings today applauded the range of U.S. legislative support for the development of Ukraine’s broad and untapped resources and an increase in transparency and good governance.

Steve Hilton of Fox News concluded his reporting with the following:

This is a massive scandal. U.S. cash for Ukraine gas. Sen. Ed Markey, Sen. Jeanne Shaheen, Sen. Richard Blumenthal, John Kerry, David Leiter, Devon Archer, Hunter Biden — and yes, Joe Biden, who was literally presiding over all of this as it was going on — of course, it should all be investigated.

It’ll be up to our justice system to look into any criminal charges, but it’s open to anyone to make referrals of suspected campaign finance violations. We reached out to and invited Sens. Markey, Shaheen and Blumenthal to come on the show, but they didn’t respond.

Those payments from Burisma’s lobbyists to those senators raised suspicions of money laundering and illegal foreign donations aiming to buy influence in America’s democracy. The details should be sent to the Federal Election Commission. We will post them soon.

Devon Archer’s questionable business practices don’t end with China and the Ukraine. While all this was going on Devon Archer was a target of an investigation that would see him arrested, tried and convicted by a jury. 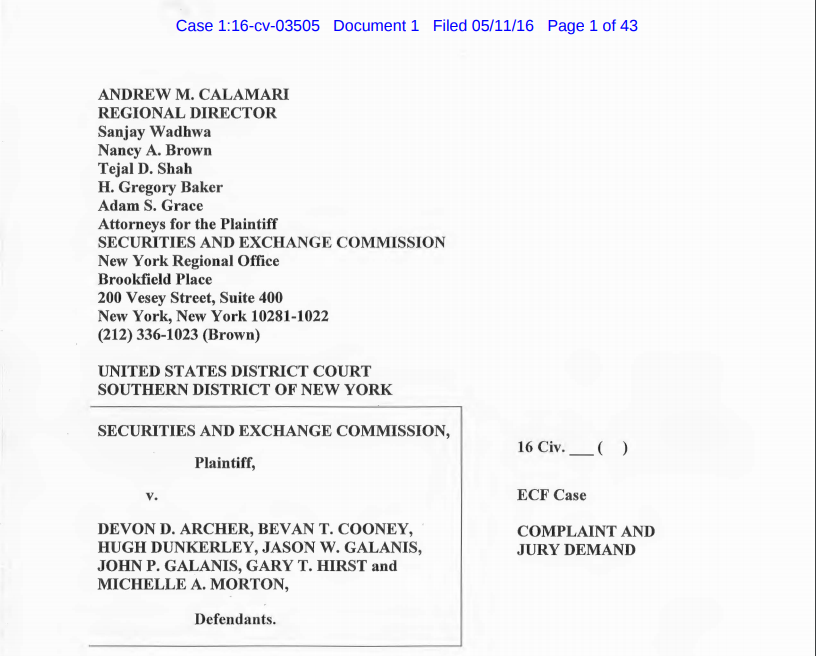 According to the United States Attorney’s office for the Southern District of New York, between March 2014 and April 2016, Devon Archer was caught up in a scheme wherein over $60 million dollars in Fraudulent Tribal Bonds were sold to various pension funds. According to the June 2018 Press Release issued by the U.S. Attorney, Archer’s role in the scheme unfolded as follows:

After securing the sale of the Tribal Bonds to these unwitting clients, the defendants and their co-conspirators then misappropriated the proceeds of first Tribal Bond issuance.  Specifically, although the Tribal Bonds were supposed to be invested in an annuity, Hugh Dunkerley, at the direction of Jason Galanis, transferred significant amounts of the bond proceeds to support the defendants’ business and personal interests.  JOHN GALANIS, for example, secretly received $2.35 million in proceeds of the first bond issuance, which he spent on a variety of personal expenses and luxury items, including cars, jewelry, and hotel expenses.  Similarly, Jason Galanis used a portion of the proceeds of the first Tribal Bond issuance to finance the purchase of a $10 million luxury apartment in Tribeca.

In addition, after JOHN GALANIS induced the WLCC to issue a second round of Tribal Bonds, ARCHER and COONEY used $20 million of bond proceeds from the first issuance to buy the entirety of the second issuance.  As a result of the use of recycled proceeds to purchase additional issuances of Tribal Bonds, the face amount of Tribal Bonds outstanding increased and the amount of interest payable by the WLCC increased, but the actual bond proceeds available for investment on behalf of the WLCC did not increase.  The bonds purchased by ARCHER and COONEY were then used to meet net capital requirements at two broker dealers in which ARCHER and COONEY had interests.  COONEY also obtained a $1.2 million loan based on his purported ownership of the bonds, a loan he subsequently failed to repay.  In addition, millions of dollars in bond proceeds from the first and second issuances were used to finance the acquisition of companies that the defendants and their co-conspirators acquired as part of a strategy to build a financial services conglomerate.

On page 8 of the complaint filed against Archer by the Securities and Exchange Commission (SEC), Rosemont Seneca Bohai, LLC, the same company that accepted payments from Burisma Holdings, was listed as one of the companies who benefited from the scam. Although Archer was found guilty and convicted by a unanimous jury in June 2018, by November of the same year, Obama-appointed Judge Ronnie Abrams took it upon herself to overturn Archer’s conviction. According to Reuters:

U.S. District Judge Ronnie Abrams in Manhattan ruled that the evidence at the trial earlier this year had not shown that the man, Devon Archer, knew that the bond issue was fraudulent, or that he received any personal benefit from it. Abrams said she was “left with an unwavering concern that Archer is innocent of the crimes charged.”

She upheld the convictions of John Galanis and Bevan Cooney, who were tried and convicted alongside Archer.

While Devon Archer remains a free man, he has resigned from the Board of Burisma Holdings as of April 2019 along with Hunter Biden just prior to the launch of Joe Biden’s 2020 Presidential Campaign.