Yet, another rainy Monday here in NEOhio.

Onward: Remember when we used to start off the week with boring slow news day Mondays?
Now they’re migraine Mondays. Actually, Imma order one of these coffee mugs. I need it…

Naomi Lim: Biden hemorrhaging Trump voters who supported him in 2020

Chuck Ross: These Two Cities Can Thank Their Dem Senators for the Nation’s Highest Inflation Rates

JUST IN: President Biden will visit Buffalo on Tuesday. There’s no word yet on when he will visit Waukesha, WI or Orange County, CA or Brooklyn, NY.

Buffalo is a tragedy. Waukesha was a fender bender. The difference is politics. #JoeBidenIsADisgrace

Twitchy: ‘Waukesha says HI’: Biden tweeting about traveling with Jill to Buffalo ‘to grieve with the community’ does NOT go well, like at all

Bank on old Joe getting all angry old white guy and spouting-off about “white supremacy” and the absolute need for gun control. The left was indeed swift to jump all over this as a GOP and FOX News and Tucker Carlson crime, in 1 … 2 … 3 … 4 … 5. Despite this…

More blood on the hands of @tuckercarlson and @foxnews this killer used their racist talking points to justify killing 10 people. Carlson won’t stop because as he explained to the NYTimes, it’s good for ratings. Lives be damned. As Carlson will be at judgement day. https://t.co/fse5bRvEbN

The killer’s manifesto attacks Fox News but feel free to continue exploiting people being murdered for some likes and retweets https://t.co/7n27fdlxfw pic.twitter.com/JOKCga9w6R

The manifesto of the terrorist who killed people today contains the following:

– He did a chart of Jewish people and included me under “troll Jew.”

– An admission that he is is “authoritarian left wing.”

Twitter bans people for linking to these documents even though it helps us understand what is true and what isn’t.

I can’t post it but what I said above is true and verifiable.

Dan Zimmerman: Buffalo Shooter Reportedly Chose a New York Target Because of the State’s Gun Control Laws … It really looks like one of those faked “hate crimes” with faked racist signs/nooses that are found out later to have been deliberately perpetrated by … leftists/minorities to cause trouble at school/work. Except this bastard went the very extra-lunatic.

The House GOP leadership has enabled white nationalism, white supremacy, and anti-semitism. History has taught us that what begins with words ends in far worse. @GOP leaders must renounce and reject these views and those who hold them.

This leftist weaponization of racial division for political power against the multi-racial working class GOP is vile and disgusting — even if it were not being uttered to, among others, a man who survived an assassination attempt. Abhorrent and utterly disqualifying. https://t.co/yIot1ZEC2E

No. Not yet, atleast. But it sure as Hell is standing in the way of producing it here … and distribution when you count the administrations horrific energy policies making transportation of goods to stores for consumers near impossible. Hey, Pete, that’s sorta-kinda your department/job, right? Something tells me/us that Pete B. and his husband aren’t having any issues finding formula for their recently adopted twin babies. 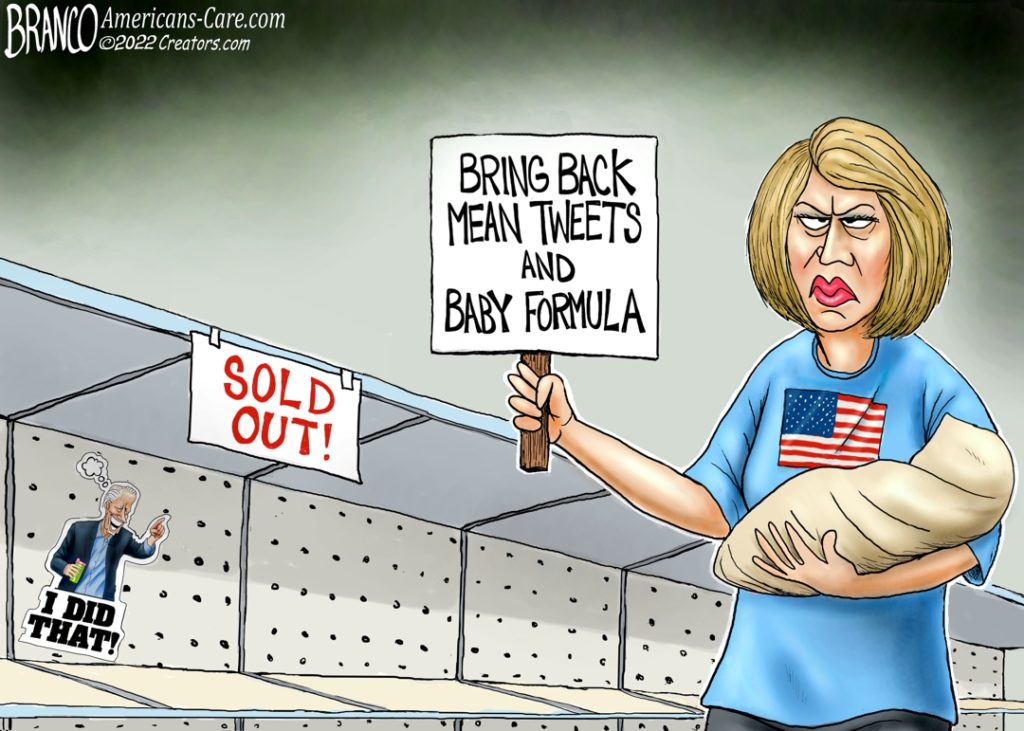 With that in-mind, people are finally realizing everything that has been happening these last 16 months of this administration is not “incompetence” but deliberate…

The pro-abortion outrage will not work for the left.
They will move on to racism.

Don’t let them trigger you. Everything is about November.

Our Summer of Rage is officially beginning.

We’re prepared to rage for Roe all summer, culminating in a Women’s Convention in Houston, Texas.

Twitchy: Women’s March promises a ‘Summer of Rage’ over abortion … AAAAnd of course a large percentage of those marching will be (biological) male antifa-types.

“Theocratic dictatorships do not lie only in the distant past,” @MargaretAtwood writes. “There are a number of them on the planet today. What is to prevent the United States from becoming one of them?” https://t.co/re2rVqwJqc

Letting voters in the various states determine the extent of abortion rights is a theocratic dictatorship?

In fact, it’s almost, by definition, the exact opposite of a dictatorship. pic.twitter.com/0dQzVHeGP2

It’s a bit ironic that she/pro-aborts are the ones who’ve actually turned infanticide into a religious ‘rite’ of their religion of leftism. They really should try to be honest & stop spelling it as ‘abortion rights’ but ‘abortion rites’. They’re missing out on religious rights.

THESE SPOILED LITTLE RED GUARDS DON’T BELONG IN LAW SCHOOL, OR IN THE LAW. Yale Law School students angry that their ‘private’ posts about ‘unrelenting daily confrontation’ with conservatives classmates are being used.

Also, you’re a moron if you think the way to deal with a Supreme Court decision you don’t like is to harass your law school classmates. Seriously, these people don’t belong in law school or in the law, and Yale’s selection process, which seems to have flooded the place with people like this, needs a complete reboot.

Twitchy: Yale Law School students angry that their ‘private’ posts about ‘unrelenting daily confrontation’ with conservatives classmates are being used

NEW: Students at Yale Law School are responding to Alito’s leaked opinion with calls to accost their conservative classmates through “unrelenting daily confrontation” and toss the Constitution by the wayside.

Reading through the thread I get a stench of a “Dark Knight Rises” Bane’s court with these alleged ‘students’ of law/ jurisprudence. These will not be lawyers, but active activists inside the courtrooms. Justice won’t be blind; it’ll have its eyes gouged out. 1/2

Jonathan Turley: The License to Leak: How Years of Attacks on the Court Created a “By Any Means” Mentality

You’ll notice the age of rage crowd seems quite ‘always-at-the-ready’ and well-funded.

In May, a group called Accountable Tech, which calls itself a ‘small nonprofit taking on Big Tech companies,’ organized a corporate boycott to protest Elon Musk’s bid to buy Twitter. In the midwest, a group called Opportunity Wisconsin, which bills itself as a ‘coalition of Wisconsin residents,’ ran a deluge of TV ads slamming Republican senator Ron Johnson for his tax policies. And in Arizona, an organization of ‘grassroots racial justice’ activists called Just Democracy released a video blasting Democratic senator Kyrsten Sinema for failing to support the Biden administration’s legislative agenda.

None of these groups actually exist. They are all registered trade names for the North Fund, a shape-shifting nonprofit group that uses aliases to push an array of left-wing causes from a shell office in Washington, D.C., according to corporate records.

Political watchdogs say the fund, which isn’t required to disclose the donors behind its $66 million budget, is gearing up to be one of the most consequential dark-money players of the midterm elections. And while “astroturf” groups are nothing new in politics, critics say the North Fund is part of a new breed—moving away from specific policy advocacy and delving into electoral politics…

Victor Davis Hanson: The Cycles of Revolutions in Our Midst: The world is fragmenting and changing in all different directions. Unfortunately, contemporary America is offering no guidance.

Chris Queen: Your Member of Congress Can Now Order ‘Drinks on Demand’ at the Capitol

Philip Caldwell: Taxpayers Pony Up To Give All House Staff Peloton Memberships … The damn US Capitol already has a friggin’ state of the art gym.

Kevin Haggerty: Psaki claims Biden made up ‘Ultra MAGA’ label all by himself, Team Trump already owns it

Paul Sacca: The CNN+ train wreck somehow managed to get even more humiliating

UPDATE to that Mars Doorway…

About this raw image (https://t.co/hZxiepGQXx), what’s that? An entrance to a secret underground tunnel? Watching it in context as part of the whole mosaic, we can see that little niche in a rock w/ other blocks, fractures, shapes & other erosive features all over that rock face. pic.twitter.com/ou4Ze941HR

It’s only about 12″ x 18″. Are you proposing their are elves or fairies living on Mars?

BONUS: Did you catch the lunar eclipse overnight…

It’s hard to get a picture of a lunar eclipse. pic.twitter.com/BU1rYh3yLD

The moon is dicking with the photographer. LOL!

Call a doctor if your lunar eclipse lasts more than 4 hours.