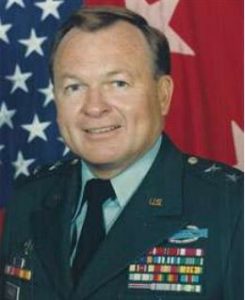 Gen. Vallely was asked by a listener in Mike’s chatroom, “Who’s the individual calling himself or themselves Q?”

Gen. Vallely answered the following: “Q-Anon is information that comes out of a group called ‘The Army of Northern Virginia.’  This is a group of military intelligence specialists, of over 800 people that advises the president.  The president does not have a lot of confidence in the CIA or the DIA (Defense Intelligence Agency) much anymore.  So the President relies on real operators, who are mostly Special Operations type of people.  This is where ‘Q’ picks up some of his information.”

Mike Filip spoke about 8 Chan being dropped and relaunched as 8Kun, which would be backed up by a military satellite.  Gen. Vallely said he didn’t know about that, but that there is a separate internet being created, one that could not be compromised because it is so high-tech.  He said the Chinese are working on the concept as well. Q-Anon is expected to be posting on 8Kun very soon.

Referencing the DOJ Inspector General Report rumored to be released Friday (10/18/19),* Gen. Vallely expressed concerns about possible Antifa Protests breaking out around the country. He also said Antifa is very well funded.  Gen. Vallely calls on all mayors to stand up against Antifa protests or be arrested for not keeping them out.

*Maria Bartiromo first reported the date to be October 18, then posted by Twitter on the 14th: “UPDATE – IG report NOT out this Friday 10/18 … Likely end of month.”

Q-Anon came on the scene in late October 2017.  “Q” dropped clues through posts that led to research by Patriots around the world.  Q-Anon’s main mission is to educate, expose evil, shed light on darkness, and bring awareness and truth.  Q-Anon taught Patriots how to stand up against the Deep State/NWO operatives and to Never Ever Give Up!

Thanks for posting this. I’ve been in many private conversations with the general, and more info is coming.

Thank you so very much for the video and explaining just who Q is. May God Bless your work. And God Bless General Flynn and all who will fight the good fight for God and Country.

Wow! Why isn’t this being talked about on Freedom rings? It’s 5:54pm. Should talk to 412anon to check PSB.COM first.

Why is no one remembering Ret. Gen. Vallely’s protection of satanist Aquino ?

After a LONG pause, I’m starting to see information like we once had on qresearch and qb. Today, https://www.thegatewaypundit.com/2019/10/breaking-convoy-of-trucks-seen-emptying-obama-linked-former-ukrainian-president-poroschenkos-palace-confidants-arrested-and-flee/ takes that predictive look behind the scenes that we used to accomplish on Q (only, much faster, as a rule).

On Q, though, we’d have the drivers names, ages, and favorite brand of beer by now. 😉

Q, the President and the US military are the last and only hope for America.

“… from all enemies, foreign and domestic.”

I am so glad to have found you! I was becoming very discouraged! Thank you!

This article seems to confirm what i suspected Q was.I know everything Q has told us to research has checked out and Biblically prophetic.Although I know misleading info is sometimes use for false Intelligence to throw off the DeepState.Q is what gives me hope in america for america.Im always suspicious of the synagogue of satan and his children ,Satan is… Read more »

Land based wars nowadays are realized via the UN replacement migration programm that was planned in 1994 and today you can see the results in Europe/Germany. If Europe is down these people will continue migrating, maybe to Canada or Asia or where ever they will managed to go … People all over the world with a loving heart have to… Read more »

Thank you all for all that you are doing to free this world.

I know nothing about Q; however, I do not like the censorship that is happening on our social media. Encouraging one to learn can only be good.

Amazing and enlightening discussion Vallely … OMG … many confirmations of Q that been following and connecting dots. Answers the question, was POTUS asked to run … yepper Sir, I do believe so, and with full support of White Hat military, full knowledge of plan and execution. The United States will not fall, we will never be a Communist nation,… Read more »

God has won! We will never surrender to the forces of darkness. Bright days ahead for true believers.

Locked and loaded and standing by. Nothing can stop what’s coming!

Hello from Spain! Thank you so much for your commitment! I want you to know that lots of people here are supporting the truth and praying for you all. There’s no such a cure like the truth!

I can’t help but wonder how long others are going to be able to hold back angry folks because they are losing faith. Any help appreciated

This website uses cookies to improve your experience while you navigate through the website. Out of these, the cookies that are categorized as necessary are stored on your browser as they are essential for the working of basic functionalities of the website. We also use third-party cookies that help us analyze and understand how you use this website. These cookies will be stored in your browser only with your consent. You also have the option to opt-out of these cookies. But opting out of some of these cookies may affect your browsing experience.
Necessary Always Enabled
Necessary cookies are absolutely essential for the website to function properly. This category only includes cookies that ensures basic functionalities and security features of the website. These cookies do not store any personal information.
Non-necessary
Any cookies that may not be particularly necessary for the website to function and is used specifically to collect user personal data via analytics, ads, other embedded contents are termed as non-necessary cookies. It is mandatory to procure user consent prior to running these cookies on your website.
SAVE & ACCEPT
30
0
Would love your thoughts, please comment.x
()
x
| Reply