June 3, 2020 – Former Deputy Attorney General Rod Rosenstein testified today at the Senate Committee chaired by Senator Lindsay Graham (R-SC) to address the Russia probe. This hearing became almost immediately apparent as nothing but a show and PR stunt for Graham. If he had any intentions of taking it seriously, there were plenty of questions he could and should have asked. He even said in his opening statement that he didn’t believe Rod Rosenstein was involved in any kind of conspiracy against the president.

This hearing seems to be a way for Graham to make it look like he is doing something about Spygate and is serious about getting to the bottom of what happened. It’s a way for him to save face, while running cover for former Obama officials. The American people have been subjected to this frustrating dog-and-pony show before, and we want substance. Meat. We want real hearings; we want real questions asked; we don’t want to hear politicians dance around political correctness and circular word salads. We are sick of watching Democrats attempt to hijack official hearings to grandstand and virtue signal, and lie through their teeth, as their allies in the media egg them on. We have no patience for it.

So, what are some of the key takeaways and observations from today’s testimony?

RR forced to agree there was no basis for Mueller pic.twitter.com/hi5PxAxzgp

As Ms. Lokhova points out, Rosenstein was forced to admit there was no basis for the Mueller Special Counsel.

McCabe accuses Rosenstein of being a ‘willing accessory’ to ‘the president and his men’ | Just The News https://t.co/4T7SbKoi37 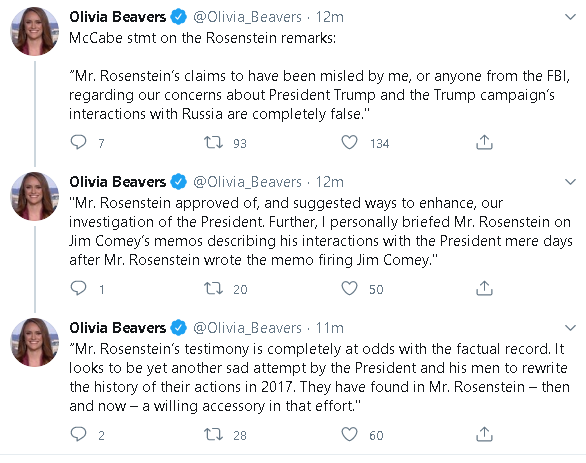 It is quite clear, from everything we know about Andrew McCabe, that he and his other co-conspirators like James Comey are panicking.

What's worse, he claimed he had no idea that the DNC paid for the dossier when he signed the FISA warrant, which he didn't fully read. Anyone praising him for repeating what the IG said about the FBI's misconduct as if it exonerates his own wrongdoing is ignoring half the picture

Shem makes a very good point here, and he later points out that Rosenstein refuses to condemn what happened to General Flynn.

Senator @LindseyGrahamSC says to Rod Rosenstein: "I don't believe you were out to get the President."

This is a very revealing statement to make since all the evidence laid out during these hearings is that Rod Rosenstein was out to get the President.

Why would Graham say it?

Emerald observes the obvious, which is that Lindsay Graham was taking the opportunity to cover for Rosenstein before the hearing had even really begun.

Nobody can say Rod Rosenstein or anybody else at DOJ took **any actions whatsoever** to impede, obstruct or hinder Mueller's investigation.

And someone remind me: what did Mueller FIND after he and his crack team of bloodhounds were allowed to write their own scope memo?

Columnist Brian Cates has a different take on what is really going on with this hearing. He believes that Rosenstein helped set a trap for the conspirators. By allowing the Special Counsel to go ahead, no one can say there was ANY obstruction of that “investigation.”

Nothing about the actual SpyGate evidence itself changed today except for the guy who was was supervising the Russian investigations testifying the FBI blatantly deceived him to keep a fraud in motion.

Rod's story is the FBI not only fooled the FISA Court, it fooled him too.

Brian is honing in on several exchanges wherein Rod Rosenstein made these admissions regarding the conduct of the FBI, and both James Comey and Andrew McCabe.

On the Democrat side of the isle, Mazie Hirono thought she was speaking to Inspector General Michael Horowitz.

"…And he did not reveal to me that he was having internal deliberations with his team about whether to target very high profile people for investigation…that's the kind of thing I needed to know."

More stunning admissions from Rosenstein that need additional follow up. Andrew McCabe needs to be called in to explain what he was doing and why he was doing it.

While many are expressing "outrage" at the Rosenstein testimony, Comey and McCabe are panicking.

Graham: "When you signed the scope memo in 2017, you did not not know that in Jan the 4th 2017 the FBI field office recommended dropping General Flynn from Crossfire Hurricane."

Are they trying to set McCabe up as the fall guy? If the FBI was making materially false statements to the Department of Justice (DOJ), isn’t that considered a conspiracy to defraud the U.S. Government?

Svetlana has noticed something key here — the fact that Carter Page was not even part of the campaign anymore at the time Rosenstein signed the FISA in June of 2o17. This is going after a duly elected President of the United States.

Weird—looks like Senator Graham just interrupted Rosenstein when he was about to implicate dozens of federal agents & lawyers.

This should be the key takeaway from this hearing: Lindsay Graham prevented the American people from learning the truth about the depths of the corruption today. Further, he was clearly attempting to run cover. Deeply disappointing, this turn of events borders on betrayal to the millions of Americans out there anticipating Justice to be served in this case.

Rosenstein has thrown Comey and McCabe under the bus among others of his own Department of Justice team, and somehow wants everyone else to believe he is innocent of everything. Mueller did NOT ‘inherit’ his team, Mueller selectively picked committed Democrats with a bias.

They knew no one in that scope memo Haven’t committed any crimes. pic.twitter.com/wi1vyFRY9R

How is it possible that the FBI agents running Crossfire Hurricane could then sign on to the Special Counsel staff, and outline the scope of the supposedly “independent” investigation?

.@RodRosenstein explains why he was reluctant to share information with Congress but the question is why would he not share the Brady material with @GenFlynn’s Lawyers. pic.twitter.com/C69DGE8h91

Rosenstein was given the opportunity to speak about the egregious treatment of General Flynn and chose not to. History will remember him as a coward for this.

.@RodRosenstein tells @SenMikeLee he didn’t think the top of the FBI had been politicized. pic.twitter.com/qUVyZYDo4D

Rosenstein claims he didn’t believe the top leadership of the FBI had been politicized. It’s becoming increasingly apparent that the entire Obama government was politicized and weaponized.

Ted Cruz seemed to be one of the few people really willing to drill into Rosenstein.

.@RodRosenstein says his understanding was @GenFlynn had lied to the FBI and vice president.

Apparently he didn’t get the memo where the FBI agents said they didn’t think he lied. pic.twitter.com/sEeRCQR1Kh

We still have yet to see the original Flynn 302.

opening of the investigation into possible ties between the Trump campaign and Russia was in fact justified..IG Horowitz confirmed that none of the FISA errors his investigation uncovered call into question – quote – any part of the special counsel’s report – end quote”@CBSNews

It’s disconcerting to see someone like Dianne Feinstein, who had a Chinese spy driving her around for 20 years, but nevertheless still is able to participle in this kind of a proceeding. She should not hold any office.

Rosenstein is now deliberately conflating spying to "get campaign information" and spying to target the campaign itself. Unfortunately no one called him out on it.

He did this more than once, purposely conflating things — and he was allowed to get away with it.

“I’m fairly confident that political bias DID NOT enter into the Mueller Investigation “ – .@RodRosenstein pic.twitter.com/pdVGKUCzLV

That quote was so ridiculous, it speaks for itself.

Someone ask about the info given by former FBI General Counsel James Baker #RodRosenstein offered you wear a wire against @realDonaldTrump and invoke the 25th Amendment to coup? Let’s grill him on these questions …

No one really asked him about this incident, unsurprisingly.

I'd call it a complete waste of time if not for the fact that it makes it harder for people to try to defend him.

While not seeking answers to some poignant questions the public wanted to hear, I think that this hearing did provide some insight into how these officials think.

How’s this: did you ask McCabe why he opened a counterintelligence investigation on POTUS—while you were DAG? Did you ask what it was based on? Did you think maybe POTUS really was controlled by Putin? https://t.co/wp93xXf6Rr

These admission will be helpful for John Durham’s investigation.

Jaw-dropping admission: Rosenstein agrees that by August 2017 there was no evidence of Trump-Russia collusion … but he let Mueller probe proceed| Just The News https://t.co/3a6KHVIWRT

Poor @RodRosenstein admitted to Senate he did not do independent investigation before appointing Special Counsel. GROSS NEGLIGENCE. Rod had responsibility to review facts. I did when at DOJ. He shld publicly apologize to @GenFlynn, @GeorgePapa19, and @carterwpage. #maga

This admission alone is enough to investigate the entire Special Counsel operation.

Rod Rosenstein has a lot of very big problems:

1) We have his DOJ emails because @JudicialWatch got them. And they’re damning.

2) Rod authorized the Mueller Probe with a scope memo. Today he testified: “I don’t know who exactly prepared it.”

It remains to be seen if anything will be done about this falsehood.

…"was not candid … or forthcoming." Notably, we now know that the Flynn investigation found no criminal acts by December 2016 and now Rosenstein said he would have ended the investigation of Page which was the focus of the early justifications of the Russian investigation.

Rosenstein insists that the information in appointing Mueller was based on that incomplete information at the time. He admitted that by August 2017 when he signed off on the Mueller investigation there was no evidence at all of collusion with the Russians.

This is outrageous. At the very least, he should be charged with criminal negligence.

Sundance from the Conservative Treehouse essentially came to the same conclusion I did. Lindsay Graham was running cover for his Deep State cronies. He believes that Lindsay is actively engaged in a counter-measures cover up, attempting to spin what happened, and make it look like nothing more needs to be done. Lindsay seemed not only lacking enthusiasm, but he appeared as though he had to be dragged kicking and screaming into leading this hearing. Graham refused to ask about Rod’s wife, Lisa Barsoomian, a CIA employee, and any potential conflicts of interest.

While we did not get all our questions answered, we did get several important admissions that could aid U.S. Attorney John Durham in his probe. Former FBI Director James Comey and former FBI Deputy Director Andrew McCabe are not sleeping soundly, that’s for sure. These investigations are still ongoing. I do not believe that the Spygate coup plotters are going to get away Scot-free.