Good morning, fellow Spectators. No, it wasn’t a dream. The SCOTUS did the right thing and kicked the issue and legality of abortion back to the states where it belonged in the first place. I have heard back and forth on whether or not the US Congress could have codified Roe v Wade in these last near 50 years but didn’t. And even when the pro-abort/”women’s rights” dems had majorities in both houses and the White House … and with liberal-minded RINO support … but still didn’t codify. It must be asked “why?” Well, as with any issue with the demo-commies they need the dangling issues to fundraise off of and campaign of fear, especially among the impoverished, and minority, communities. Let that sink in. The left/dems premise is that minorities and poor people should abort their unborn generations out of, what, immediate convenience? The left’s demi-goddess Margaret Sanger smiles from her maggot fossilized grave.

24 hours later I’m seeing the false analogy/false equivocation between ‘mask mandates’ and the SCOTUS Dobbs/Roe v Wade ruling is a ‘pregnancy mandate’. And ‘rape has been legalized and resulting pregnancies mandated’. *smh* The left is pure intentional and willful ignorance.

As you watch the Left call for widespread violence and destruction, with immunity from @Twitter, we would like to take this opportunity to remind you that @TheBabylonBee is still locked out of their account for a joke headline that referred to Rachel Levine as a man.

How The Babylon Bee is viewing this as only they could… 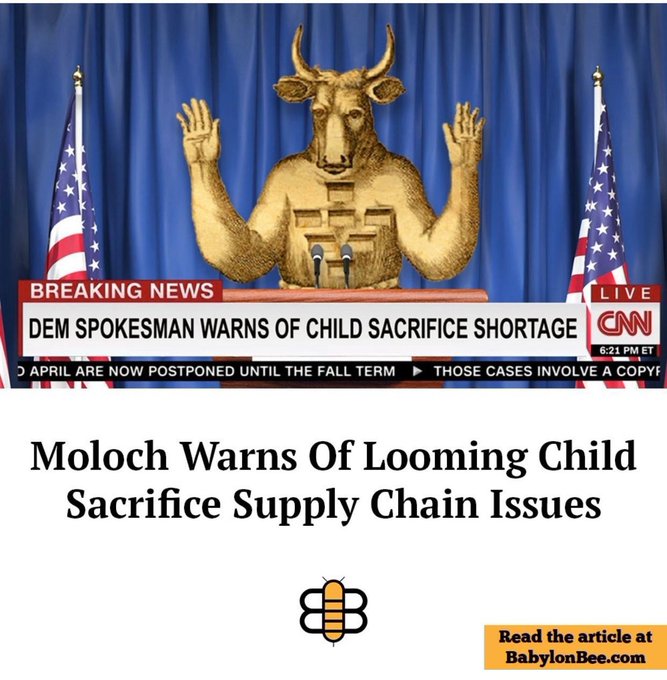 Weird: Democrats Suddenly Saying ‘Woman’ Today As If Everyone Knows What It Means

Kavanaugh Burns Down His Home Just To Get It Over With

We are currently there being held hostage inside the Senate building due to members of the public trying to breach our security. We smell teargas and the children of one of the members are in the office sobbing with fear. I expect a J24 committee to be created immediately.

Appalling to hear some Democrats defending those outside trying to break the glass and breach security. “This is a public building, and they wouldn’t let them in.” However another Democrat mad as heck for them scaring the children in the building.

Alec Regimbal @ SFGATE: Nancy Pelosi blasted for her reactions to the end of Roe v. Wade

In a news conference shortly after the ruling, Pelosi read a poem called, “I Have No Other Country” by Israeli poet and lyricist Ehud Manor. (Better known as a song in Israel, it has also been used as an anthem for Israeli settlers in the West Bank, according to Forward.)

In the poem, Manor bemoans the changes he’s seeing in his country, but says he’ll remain dedicated to it out of a fierce sense of patriotism. The last line Pelosi read describes Manor’s hope that the “changed face” of his country “will open her eyes.”

“Clearly, we hoped that the Supreme Court would open its eyes,” Pelosi said.

Abortion is a fundamental right for all women. It must be protected. I wish to express my solidarity with the women whose liberties are being undermined by the Supreme Court of the United States. 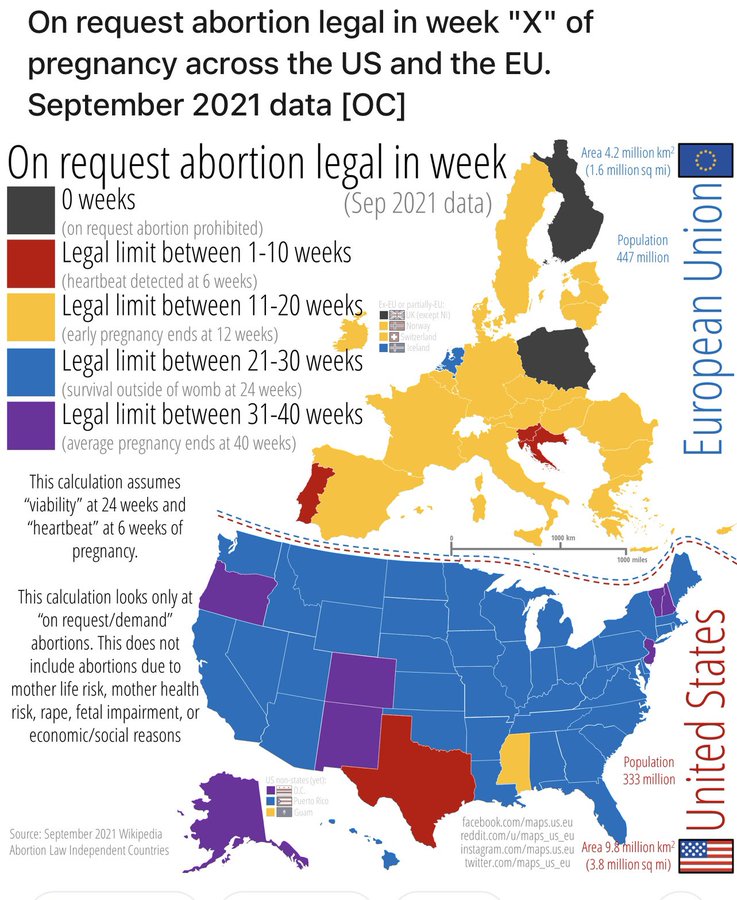 Major fact check needed here. Biden says overturning of Roe puts America an outlier in the modern world. Most European countries ban or have heavy limits on abortion. Under Roe, the U.S. was closer to China and North Korea than France.

Given this latest Brandon ‘fib’ & his missive regarding the false claim ‘inflation is higher everywhere else’ than the U.S. I’d say Robert Gates continues his prescient winning streak about Joe being wrong on foreign policy.

They Live Among Us: The left always showing us who and what they really are, folks…

Robert Spencer: Justice Thomas Calls for End to Legislating from the Bench, Drives the Left Even Crazier

I GUESS THEY DON’T LIKE AN UPPITY BLACK MAN: Protests Planned Outside Justice Thomas’s Home After Abortion Ruling. I’ve noticed that most of the hate aimed at individual justices I’ve seen on social media is directed at Thomas, even though he didn’t author the Dobbs opinion, Alito did. That’s racism, straight up.

Ana Navarro claims she is a republican. Hell, the bitch ain’t even slightly republican enough to be considered a RINO. Her list of reprehensible bullshit she spews on ABC’s “The View” and in her appearances on CNN is long and extremely not conservative. But Sweet Jesus! This is by far one of the most Hitlerian takes on the Roe v Wade ruling I’ve heard in the last 24 hours. In 5 months from now the family holiday season will be something else in the family/stepfamily that has this raging lunatic monster in attendance who just smeared the innocent ‘special needs’ family members as worthless and disposable on international TV…

If, by happenstance, I and my Down Syndrome daughter ever were to run into this witch I would state loudly to my daughter as I shielded her from Navarro, “Don’t go near her, sweetheart. She’s dangerous. She says you should’ve been killed before you were born and thinks because you were born you are garbage.” And just a reminder that the first to be exterminated by Hitler and the Nazis were those with special needs and those with physical/mental handicaps and illness.

Twitchy: Blue-check ‘Marxist pig’ says ‘violence is a legitimate and appropriate response to oppression’ in response to the Dobbs SCOTUS ruling

The left has gotten so used to imposing their will through the courts they’ve forgotten how to behave as citizens and petition their state governments for changes to the law.

Twitchy: CRAZY thread of CRAZIER Lefties proves the REAL danger in America is frothy-mouthed nut-jobs losing their MINDS over Roe

Ace: Quick Hits: “St. George Floyd once blessed an unborn baby by sticking a gun into the belly of a pregnant woman…”

.@AOC says SCOTUS “chose to endanger the lives of all women and all birthing people in this country…they’ve chosen to strip rights from men too.” pic.twitter.com/ma1xbaVrUQ 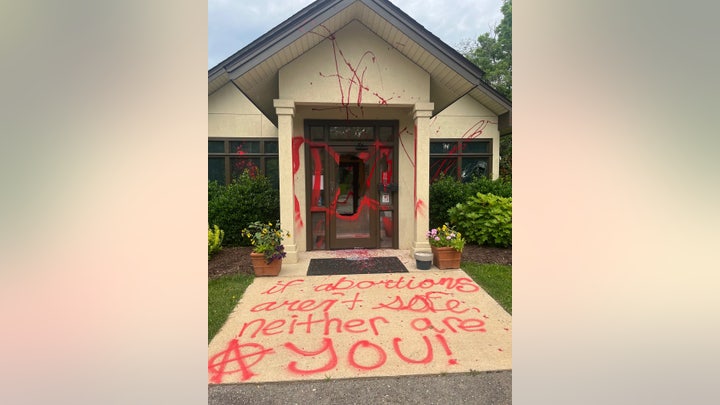 Twitchy: ‘And now we PUSH BACK’: Kick-butt thread directed at Lefties threatening violence over SCOTUS decisions an EPIC must-read

Josiah Lippincott: America Needs a Red Flag Law For Senile Senators: It is high time we came together, reached across the aisle, and passed common sense senile senator control.

Andrea Widburg: Dobbs: A return to the rule of constitutional law

John Daniel Davidson: Why Democrats Oppose Emancipation For The Unborn: The Supreme Court’s decision in Roe was as shameful as its decision in Dredd Scott — and for the same reason.

Paul Kengor: Thanking Trump and What Reversing Roe Really Means – He governed as the best pro-life president ever.

Ryan T. Anderson and Alexandra DeSanctis: How the Eugenics Movement Made Race-Based Abortions Normal: Planned Parenthood condemns sex-, race-, and disability-based discrimination in every other context, except when it occurs in the womb.

Glenn H. Reynolds: The leak, the threats, the violence — reaction to Roe is dark day for nation

Eleanor Bartow: How To Win The Debate On Abortion In 12 Clear Counterpoints: The same points keep getting made in the debate on abortion. Here are the many reasons the usual points in favor of abortion are wrong.

Michael Robison: How Overturning Roe Has Exposed Lies, Ignorance and the Manipulation of You

Cody Wisniewski: From D.C. to Olympia, Politicians – Guarded by Guns – Presume to Tell You How You’re Allowed to Defend Yourself and Your Family

John Daniel Davidson: Merrick Garland’s Department Of Justice Is A Threat To The Republic: Federal raids this week, along with an inappropriate statement about a SCOTUS ruling, underscore the weaponization of the DOJ under Garland.

Ben Boychuk: We’re All Fascists Now, Apparently: Fascism for facile journalists and the knee-jerk Left is like Justice Potter Stewart’s famous test for obscenity: They know it when they see it. And they see it everywhere.

Mackubin Owens: Ukraine and the Russian Way of War Redux: After blundering around and taking losses for a few weeks, the Russians have remembered how to wage an old-fashioned, World War II-style war of attrition.