On November 15, 2019, Representative Adam Schiff (D-CA) and his cast of “characters” on the Hill held the next act of their impeachment melodrama starring the tearful former Ambassador to Ukraine, Marie Yovanovitch. If there is any doubt that the aim of Friday’s testimony is to tug at the heartstrings of Americans to pity a poor woman who was ousted by the president for no good reason, all one need do is read the mainstream media articles painting her as just such a victim. Here is only a sample from Friday’s Washington Post:

She was the target of allegations, which are unsubstantiated and which she denies, that claimed she tried to protect Americans in Ukraine by giving Ukrainian officials a ‘do-not prosecute’ list. She testified that list was fake and that it was actually Ukrainians threatened by her anti-corruption efforts who wanted her out. She says they worked with Trump’s personal lawyer Rudolph W. Giuliani to smear her, and it seems the allegations made their way to Trump. In April, she was told by a State Department colleague to fly home on ‘the next plane.’ She said she felt threatened at times through this process, sometimes by Trump himself.

Marie Yovanovitch, the recalled U.S. Ambassador for Ukraine had testified on the Hill on October 11, 2019, in the House of Representatives so-called impeachment inquiry.

She was removed from her post long before the July 25th phone conversation between President Trump and President Zelensky, on which the Democrats impeachment hopes hang by a thread. So why was she called to testify, other than as a sympathetic figure to divert anger to the White House? What she has to add to the so-called investigation remains unclear.

What she did testify to in October, and again on Friday, is her perceived victimhood as a result of a smear campaign allegedly run against her by Rudy Giuliani and Ukraine’s former Solicitor General, Yuriy Lysenko.

Pandering to the masses, Yovanovitch’s sadly written tale paints the President and his Ukraine foreign policy team as singling her out for removal by way of a smear campaign. The fact is that she served at the pleasure of the president who could have removed and replaced her for any reason or no reason at all. There was no need for an elaborate campaign to get rid of her. Nevertheless, the Democrats are banking on the fact that the average American does not realize this simple fact.

In her previous opening statement, the former ambassador pointed out that she served as Ambassador to Ukraine between August 22, 2016, and May 20, 2019, prior to the now-infamous phone call of little substance. She addressed accusations leveled against her with a categorical denial that she had ever asked Solicitor General Lutsenko to avoid prosecuting a list of individuals. Yovanovitch goes so far as to state that Mr. Lutsenko has since retracted his story, but that is not altogether true.

I want to categorically state that I have never myself or through others, directly or indirectly, ever directed, suggested, or in any other way asked for any government or government official in Ukraine (or elsewhere) to refrain from investigating or prosecuting actual corruption. As Mr. Lutsenko, the former Ukrainian Prosecutor General has recently acknowledged, the notion that I created or disseminated a ‘do not prosecute’ list is completely false—a story that Mr. Lutsenko, himself, has since retracted.

According to investigative journalist John Solomon, Mr. Lutsenko never retracted his statement. In fact, one would be hard-pressed to find any formal retraction by Lutsenko about his statement. Instead, he says quite the opposite: 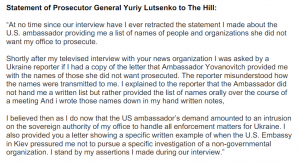 Despite the widespread media narrative claiming that Lutsenko did retract his statement, only one media outlet other than Solomon himself, actually followed up directly with the former Ukrainian Prosecutor. The New York Times interviewed him in October wherein they reported:

But he insisted that the ambassador, Marie Yovanovitch, had in fact asked him not to target certain politicians and activists who worked with the embassy on its anti-corruption efforts.

While Lutsenko is decried now as a corrupt Solicitor General, it was just a handful of months ago Joe Biden venerated him as the stellar Prosecutor who replaced the “corrupt” Viktor Shokin. According to John Solomon’s report on The Hill:

But then, as Biden’s 2020 campaign ramped up over the past year, Lutsenko — the Ukrainian prosecutor that Biden once hailed as a ‘solid’ replacement for Shokin — began looking into what happened with the Burisma case that had been shut down.

Lutsenko told me that, while reviewing the Burisma investigative files, he discovered ‘members of the Board obtained funds as well as another U.S.-based legal entity, Rosemont Seneca Partners LLC, for consulting services.’

Funny how quickly things change. Interestingly, during the hearing Representative Elise Stefanik (R-NY) did bring to light that the Biden-Burisma connection in Ukraine so concerned the Obama administration, in-depth guidance about the issue was provided for Yovanovitch’s Senate confirmation hearing, which ironically was a contradiction to her opening statement in this hearing.

In any case, the “do not prosecute” request that Lutsenko said was verbally dictated to him by Yovanovitch has to do with a group of activists tied to AnTac, an “anti-corruption” group in Ukraine funded jointly by the U.S. Government and George Soros.

According to John Solomon, “The State Department helped fund a nonprofit called the Anti-Corruption Action Centre of Ukraine that also was funded by George Soros’ main charity. That nonprofit, also known as AnTac, was identified in a 2014 Soros foundation strategy document as critical to reshaping Ukraine to Mr. Soros’ vision.” While Yovanovitch and George Kent both testified that the “do not prosecute” list was a fallacy, on April 4, 2016, Kent authored a letter (pictured above) essentially asking Ukraine’s Deputy Prosecutor General to withdraw investigations against specific individuals, despite testifying that the U.S. Ukraine Embassy did not engage in such tactics. (Kent served as Deputy Chief of Mission in Kyiv, Ukraine, 2015-18).

Yovanovitch is no stranger to misstatements and evasive answers. During her prior testimony, Representative Lee Zeldin (R-NY) asked a pointed question whether or not she had any contact with the House Foreign Affairs Committee. Her response was no. According to an article in The Federalist, the Ambassador received an email from Laura N. Carey (Foreign Affairs Personnel) that read as follows:

I’m writing to see if you would have time to meet up for a chat – in particular, I’m hoping to discuss some Ukraine-related oversight questions we are exploring. I’d appreciate the chance to ground-truth a few pieces of information with you, some of which are quite delicate/time-sensitive and, thus, we want to make sure we get them right.

“Yovanovitch stated that she personally had not responded to the first email sent to her by an individual from the House Foreign Affairs Committee and that she had ignored the second overture.” Turns out, that was not altogether true either, as she responded to a staffer the very next day on her personal email making arrangements to meet. According to an exclusive email obtained by Fox News:

On Aug. 15, Yovanovitch responded: ‘Thanks for reaching out — and congratulations on your new job. I would love to reconnect and look forward to chatting with you. I have let EUR [Bureau of European and Eurasian Affairs] know that you are interested in talking and they will be in touch with you shortly.’

On Aug. 19, Carey wrote, ‘Great — thanks for the response and I look forward to hearing from them. As mentioned, it would be ideal to connect this week… assuming this week is doable for you schedule-wise?’

Returning to Friday’s “Group Therapy Session” re-branded as “witness testimony,” we learned very little new information. What the public could see is a woman scorned by her firing, which she and the Democrats decried as unjust and the result of some hidden nefarious purpose. Cutting through the carefully directed theatrics, the truth based on publicly available information does not paint Yovanovitch as the sterling diplomat Democrats would have you believe.

In addition to the pressure her embassy brought to bear upon the Ukrainian Prosecutor General’s office not to pursue investigations into Soros-backed activists, in March of 2019, she inserted herself into Ukraine politics in the midst of their election cycle.  While she testified how important it is for diplomats to avoid interfering in elections, it would appear she exempted herself from the advice. In her speech to the Ukraine Crisis Media Center she called for the firing of a number of judicial candidates and the Special Anti-Corruption Prosecutor. Here are just a few of the remarks:

… To ensure the integrity of anti corruption institutions, the Special Anti corruption Prosecutor must be replaced. Nobody who has been recorded coaching suspects on how to avoid corruption charges can be trusted to prosecute those very same cases …

… We don’t understand what the reason would be to appoint demonstrably flawed candidates to the country’s highest court, especially when there are other qualified candidates without such concerns available …

… The government of Ukraine should also immediately fund a complete audit of Ukroboronprom and declassify the State Defense Order to the maximum extent possible.  This will promote transparency and fight corruption in the defense sector …

The fact that Yovanovitch was recalled is neither a big deal nor all that surprising, especially in light of the newly elected Ukraine President Zelensky’s comment about her in the July 25th phone call with President Trump where he stated:

… with regard: to the Ambassador to the United States from Ukraine as far as I recall her name was Ivanovicli. It was great that you were the first one who told me that she was a bad ambassador because I agree·with you 100%. Her attitude towards me was far from the best as she admired the previous President and she was on his side. She would not accept me as a new President well enough.

Since an Ambassador’s purpose is to work with the government of the country where they are assigned, she was clearly ill-suited to continue is such a position when she did not engender the confidence of that country’s president. Why no one asked her about this during the hearing, Friday makes little sense. However, her firing is neither the subject of nor relevant to the impeachment inquiry at hand. Instead, the hearing was little more than a dramatic performance meant to inject emotion into the arena since logic and reason have thus far eluded the Democrats. The bottom line of the testimony here is simple; Yovanovitch was fired, and she didn’t like it. Welcome to the real world, Marie.