June 10, 2020 – “Welcome to Free Capitol Hill” a makeshift sign reads. It has become clear that these “riots” were not “spontaneous.” In fact, ANTIFA and other ideologically similar extremist groups have been planning and preparing these riots for years. The tactics employed are reminiscent of those used by the terror group ISIS as they claimed territory for their “caliphate” to be ruled under Sharia law. 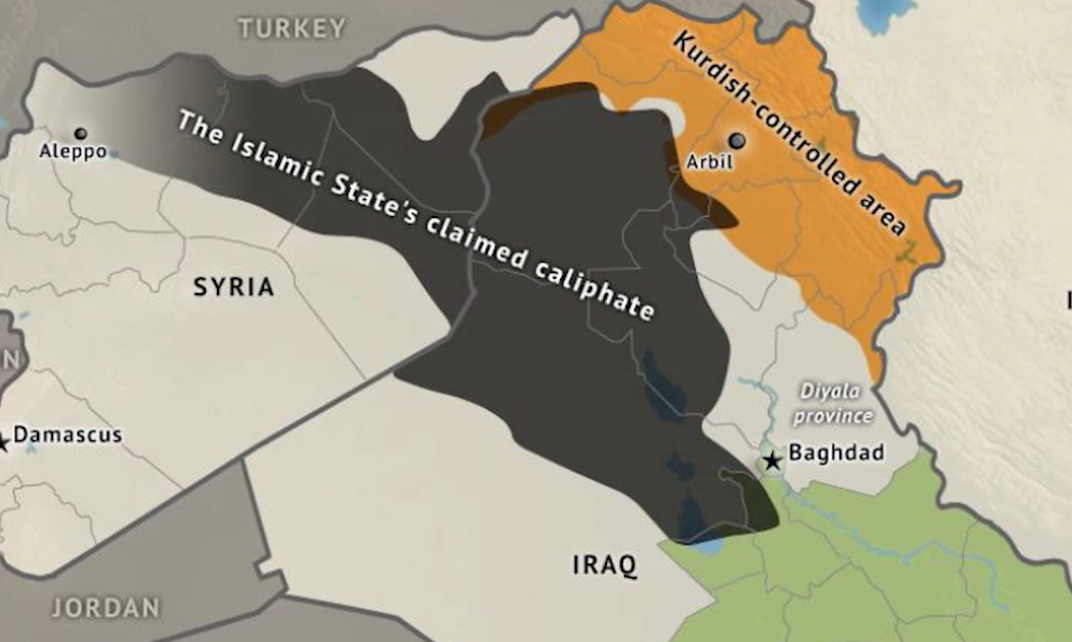 Territory ISIS wanted to claim for the Caliphate

As you can see, ISIS wanted to create its very own state. They used propaganda that outlined the goals for their organization. As they grew they became more violent. ANTIFA appears to have the funding and organizational structure to be able to mobilize large numbers of people. They are able to act in lockstep around the country. 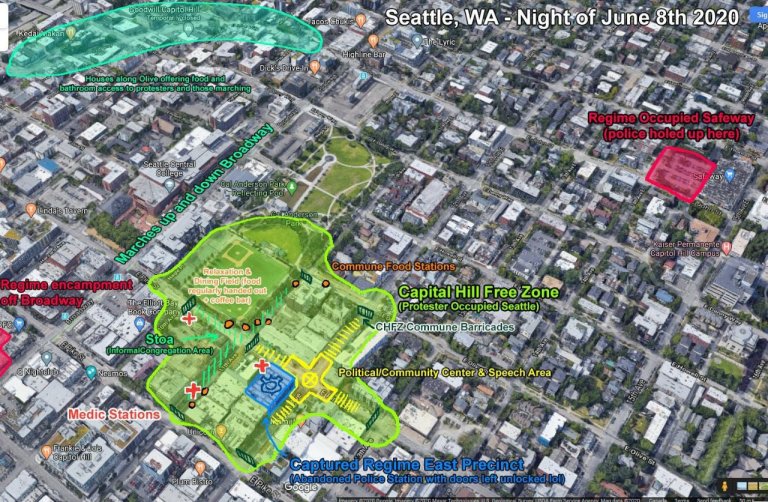 As you can see from this screen shot, this is something that clearly was well thought out. They are setting up bases of operation. At the same time, across the country in Minneapolis they have taken over a Sheraton Hotel and raised over $138,000 on GoFundMe to turn it into a base of operations.

Rioters Take Over Minneapolis Hotel, Raise Over $138,000 on GoFundMe to Turn It Into Operations Base https://t.co/3BhhTEKrTK

This shows coordination and planning. Within a few days, they have already taken over areas and set up make shift operations bases. Next will be taking over essential businesses.

Seattle #antifa extremists have occupied the Capitol Hill area in Seattle & turned it into a no-go zone. They have their people patrolling the barriers they set up. Local news crew was chased out. They had to seek refuge in fire station. pic.twitter.com/CLM08tJFFj

All the while, the corporate media pretends these groups don’t exist. Like they did with the SpyGate or RussiaGate hoaxes, they only report information that makes the Left look better. This is also what the FBI did, for example, in the Carter Page case. They changed an email, quite literally tampering with evidence. They hid exculpatory Brady material in the Flynn case, while flooding the American people with a pre-determined narrative. We can see how the media only targets one side, while covering up and hiding the crimes of the other side. It is becoming really frightening and it is something we need to be concerned about.

Policing in the Capitol Hill Autonomous Zone by @RazSimone. There appear to be no body cameras, reports, or oversight and accountability. This was an attempt at de-escalation for spraying paint onto a building which resulted in an alleged assault. #chaz #FreeCapitolHill pic.twitter.com/dI1J6QNcpn

The potential for this to escalate quickly and really get out of hand is exacerbated when you consider how the media assists these radicals. 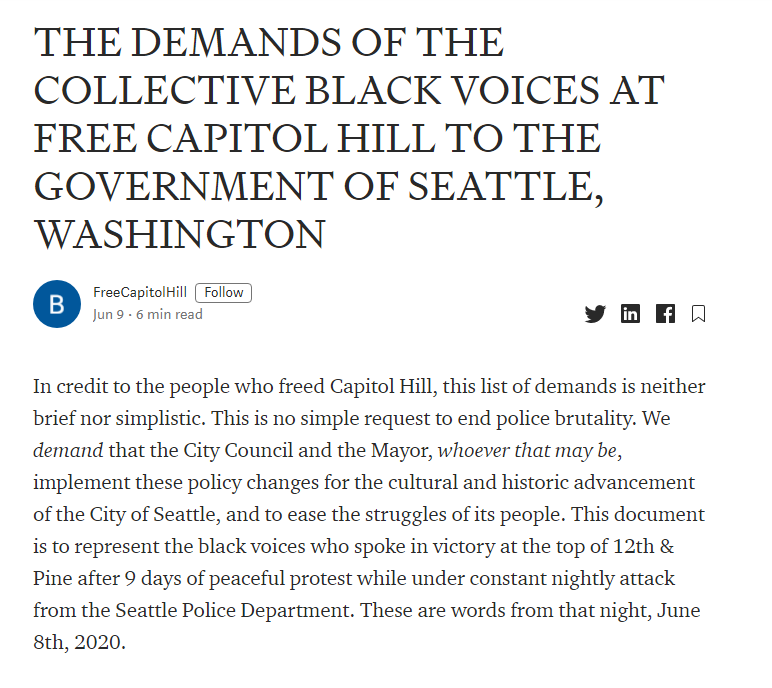 A Medium.com page appeared with the title “Free Capitol Hill” that outlines a list of “demands.”

ANTIFA AUTONOMOUS ZONE- #riots2020 #AntifaTerrorist #BLM just so you know- Commies have taken over a portion of #Seattle – So, take care and be ready for the chance of shooty looty idiots. pic.twitter.com/P0ZEdAJ0xe

This is a periscope feed. This is live.
It overlooks the East Precinct Police station.
It has been abandoned and boarded up.
You can see the "barriers/borders" they've set up.https://t.co/kDj06WG2fN

Calicem on Twitter has been tracking this and sourcing live feeds from the areas to show the activity from different angles.

One of the antifa militias named in the #ExposeAntifa video is also providing armed security for the antifa “autonomous zone” in Seattle. They are armed and trained to kill. Messages repeated by antifa explicitly call for police to be murdered. #antifa pic.twitter.com/99szJoTcuZ

Calling for armed volunteers to act as a makeshift “security” force is not a good idea, especially if these are amateurs with barely any weapons training.

The city is now under control of domestic terrorists https://t.co/7HT9JUDwip

This is really important to document because the situation on the ground can change so quickly. Anyone who remembers the Occupy and the Arab spring movements or Kiev’s Maidan Revolution can foresee bad outcomes, especially when the people are armed.

This is the same councilwoman who suggested looting and violence were perfectly fine.

This is banana republic level madness

Not a serious country! https://t.co/acCamAa80S

They may be trying to Balkanize and fracture the United States of America.

FAILURES by FBI behind the rise of Antifa? pic.twitter.com/o79UMRLnd3

Tom Fitton, President of Judicial Watch has correctly identified this an an insurrection.

There may be an ISIS or Muslim Brotherhood connection; think about Minnesota’s  Attorney General Keith Ellison, and his support for both those terrorist organizations.

TruNews has been reporting on this as well. They had predicted there would be chaos and upheaval going into the 2020 elections.

ANTIFA do not just seek to keep the “ground the claimed;” they are seeking to expand that territory, as did ISIS.

Four Reasons Why Antifa Deserves to Be Called a Terrorist Organization https://t.co/6300LlRBcr

Also like ISIS, this is not just a terror organization, but a cult.

Imagine being to stupid to realize #Antifa is a global group, who met with ISIS in 2014 at the G20 in Germany…https://t.co/GeE4lkUF11

RantsOutloud makes the point that ANTIFA is an international organization with roots going back as far as 1930s Germany. We must not underestimate them.

An expert on Jihad is characterizing this as a war zone.

Source on the ground: “They bar media from entering and screen people coming in. They are walking around fully armed. Talking about making their own currency and making their own flag.” #antifa https://t.co/w4d0a3WPGC

The difficulties with documenting what is happening within the “autonomous zone” is that they have barred media from going in, and everyone entering has to be “vetted” to make sure they share ANTIFA’s ideology.

The antifa #CapitalHillAutonomousZone in Seattle has a subreddit set up. They are posting about making homemade chemical weapons, maintaining supply lines, & how to use those armed with guns to push police back. #antifa @FBISeattle pic.twitter.com/gDub2G49KU

They are starting to act as if they are their own separate country, in a further sign of escalation.

Antifa is now extorting local business owners in the Seattle autonomous zone. Of course they are. pic.twitter.com/IxcYnfjRAc

They have begun to extort and threaten locals into compliance.

Leftist thugs like Antifa have long used doxxing to shame, intimidate, or assault those that cross them.

ISIS used very similar tactics, as they took territory for the Caliphate.

The personal information of law enforcement officers is being released online in an effort to intimidate them. Antifa & allied social media accounts have long called for & facilitated the doxing of ICE staff & law enforcement. https://t.co/wIT6byvi12

The goal is to intimidate anyone who speaks out. The Islamic State was very good at this, as well as taking hostages and using people as slaves. This is not just a bunch of college kids, or skinny soy boys. There is a hidden hand that operates behind these seemingly separate groups. The goal is the division of Americans and potentially the beginning of a second civil war. We must not let that happen. American citizens, all of us, must be brave enough to confront the mob and restore law and order.

This story is still developing, we will update it as we learn more.