April 7, 2022 — The Guardian recently reported on a plan to release genetically modified mosquitoes in California, ostensibly to “battle” deadly diseases. The article is interesting in what information it chooses to omit. The author reports:

Genetically modified male mosquitoes may soon be buzzing across areas of California, in an experiment to stop the spread of invasive species in a warming climate.

Earlier this month, the EPA cleared the UK-based biotech company Oxitec to release a maximum of roughly 2.4bn of its genetically modified mosquitoes through 2024, expand its existing trial in Florida and start a new pilot project in California’s Central Valley, where mosquito numbers are on the rise.

Oxitec’s modified mosquitoes are male, and therefore don’t bite. They were developed with a special protein so that when they pair with a female mosquito the only viable offspring they produce are also non-biting males. The project specifically targets the Aedes aegypti mosquito, one of more than 3,500 mosquito species and a dangerous invasive insect that has spread diseases like dengue, Zika, Chikungunya, and yellow fever in other countries.

The company hopes that releasing its engineered bugs will help control the Aedes aegypti in California, where numbers have risen in recent years. The species is already on the move across the state, and has been found in 21 counties according to the California department of public health. The state’s devastating drought conditions – with low water levels in pipes and ponds, slowed stagnating streams, and less rain to flush out water systems – have helped mosquito populations flourish, and they love to lurk near houses and communities.

The dangerous diseases aren’t yet spreading in California, but the invasive insect has been highlighted by officials as a growing risk.

‘It does not belong here and it is environmentally disruptive,’ said Rajeev Vaidyanathan, irector of US programs at Oxitec, of the Aedes aegypti.He added that female Aedes aegypti prefer to feed and breed in and around people’s homes, and are out biting during the day – making them much more difficult to eradicate with pesticides. ‘Butterflies and bees are out during the day,’ Vaidyanathan said. ‘That makes it very incompatible with traditional mosquito control.’

The company’s so-called ‘friendly’ male mosquitoes are delivered as eggs, ready to deploy in a ‘just-add-water’ device, which could help curb the high cost typically associated with eradicating the species.

The project, which will be carried out in partnership with the Delta Mosquito and Vector Control district in Tulare county, still needs to be reviewed by California’s department of pesticide regulation. But Oxitec has already introduced this particular strain of genetically modified mosquitoes in Brazil and is fresh from a first-year trial in the Florida Keys. The company claims to have encouraging results. ‘Every single larva that carried our gene emerged as an adult male,’ Vaidyanathan said. ‘We didn’t have any female emergence.’

Oxitec is now eager to test the technology in a new and changing climate. ‘There are some fundamental questions we need to answer before we can say this is a viable tool for mosquito control,’ Vaidyanathan said. ‘How is that going to affect our boys’ ability to fly? How is it going to affect our boys’ ability to mate?’ he said, noting that the Central Valley is a ‘goldilocks’ test location due to its arid agricultural landscapes with temperatures that climb past 100F during the summer. ‘We cannot extrapolate with what we have done in Florida.’

The EPA earlier this month concluded that the test was safe to humans and the environment, but stipulated that the mosquitoes cannot be released near any potential tetracycline sources, an antibiotic that acts as an antidote. The regulations include within 500 meters of wastewater treatment facilities, commercial citrus, apple, pear, nectarine, peach growing areas, or commercial cattle, poultry and pig livestock producers. All the modified insects are equipped with a marker gene that scientists can use to tell them apart from wild ones and regular monitoring will be put in place to ensure the experiment is going to plan.

Still, the pilot has encountered some resistance. Citing concerns about possibly unforeseen consequences and a lack of transparency, critics are calling on California regulators to pull the plug.

‘The science was incomplete before the first rollout,’ said Dana Perls, the food and technology program manager with Friends of the Earth of the trial in Florida. She said California and Florida should not be taking risks with experimental biotechnology, and said a lack of publicly released data from the field trials in Florida made it hard to gauge the project’s success.

Close to 13,000 comments were issued to the EPA in opposition to the project’s expansion this year, the bulk of them signatures collected by the advocacy organizations Friends of the Earth, the Institute for Responsible Tech and the Center for Food Safety.

‘There’s no such thing as 100% effective in science,’ Perls said. ‘Yet the public is being asked to trust that Oxitec’s experiment will work and no GE female mosquitoes will survive. But how do we know that?’

Opponents have also raised questions about the modified mosquitoes’ interaction with Tetracycline, an antibiotic used in agriculture, which can be found in wastewater and works as an antidote, enabling female mosquitoes to develop. They fear the complicated interplay could lead to hybrid mosquitoes that are even more difficult to control. ‘That’s why there needs to be transparency. We need unbiased independent review, transparency and public participation,’ Perls said. – The Guardian

Dana Perls is right to be concerned about the lack of transparency and what this article does not mention is how the U.S. Army Chemical Corps once had a TOP SECRET plan to weaponize that exact type of mosquito for biowarfare purposes.

In a secret 1959 report, the U.S. Army Chemical Corps opined, “If military attack were made with Aedes aegypti mosquitos it would be quite difficult to detect the fact.” 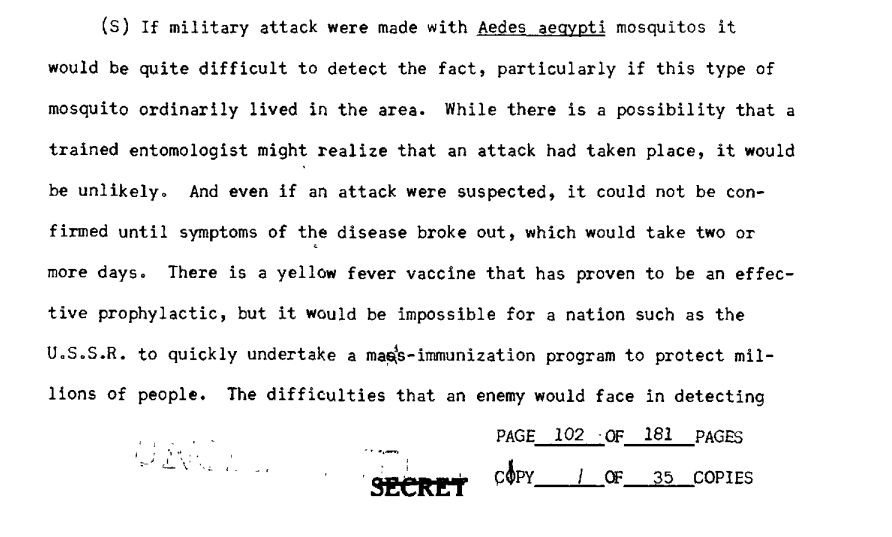 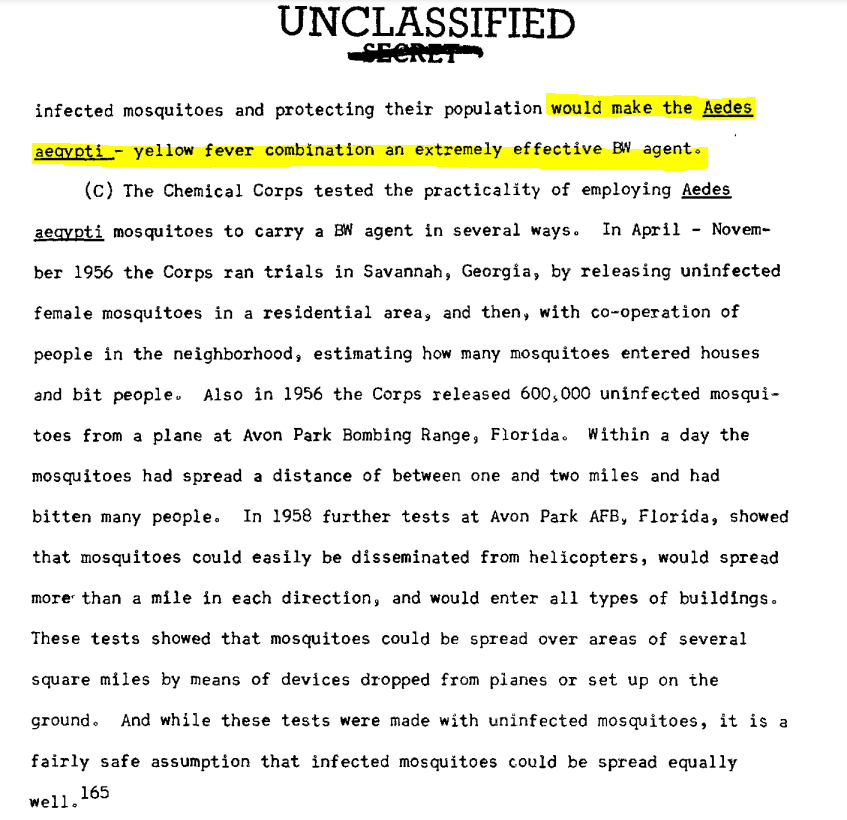 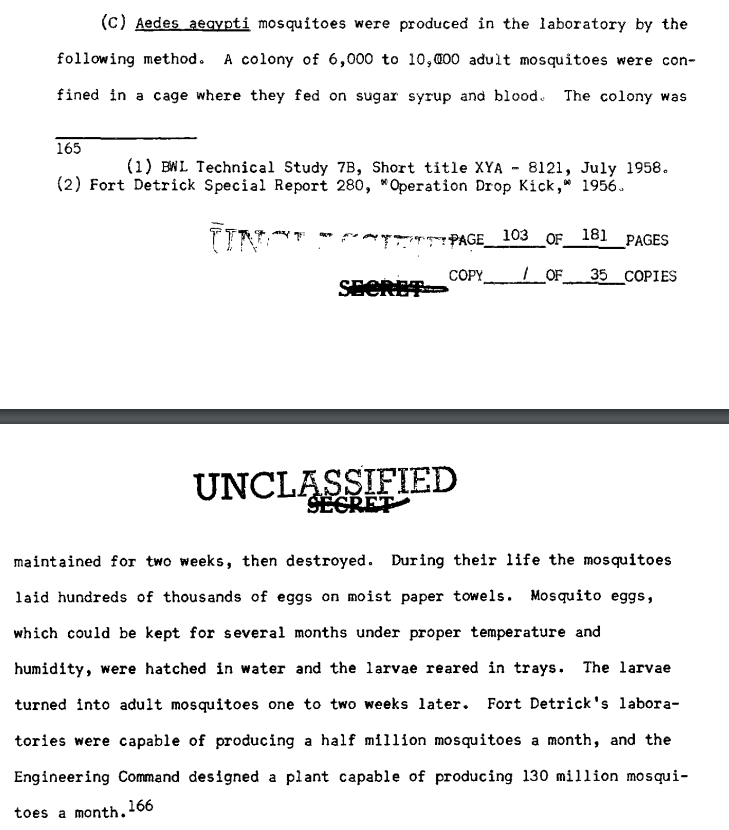 At Fort Detrick, the Army had labs capable of producing 500,000 mosquitoes a month and made designs for a plant that could produce 130 million bugs/month. Read the report here. 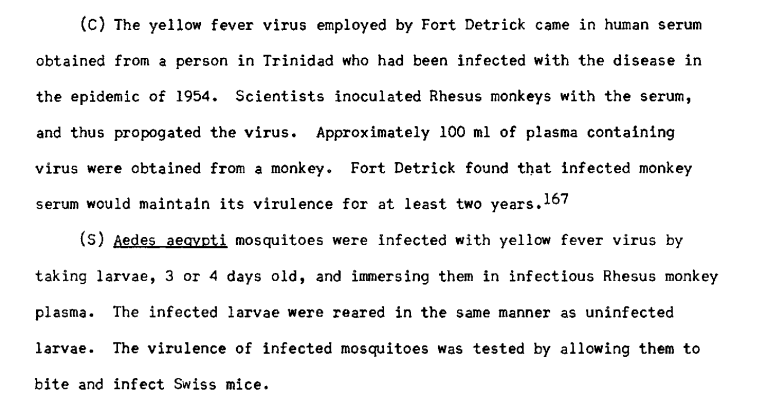 The military created an army of Yellow Fever-infected mosquitoes. The virus was sourced from a Trinidadian victim and propagated through Rhesus monkeys. Then mosquito larvae were immersed in this plasma to create BW-infected specimens.

As a result of these experiments, the Army proposed constructing a “large-scale facility” to produce Yellow Fever-infected mosquitoes on an industrial scale, which could then be disseminated through bombs, cluster munitions, and warheads. 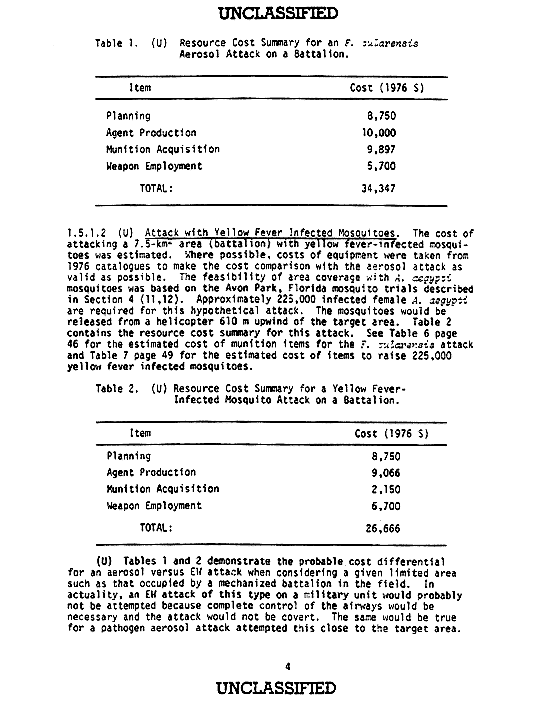 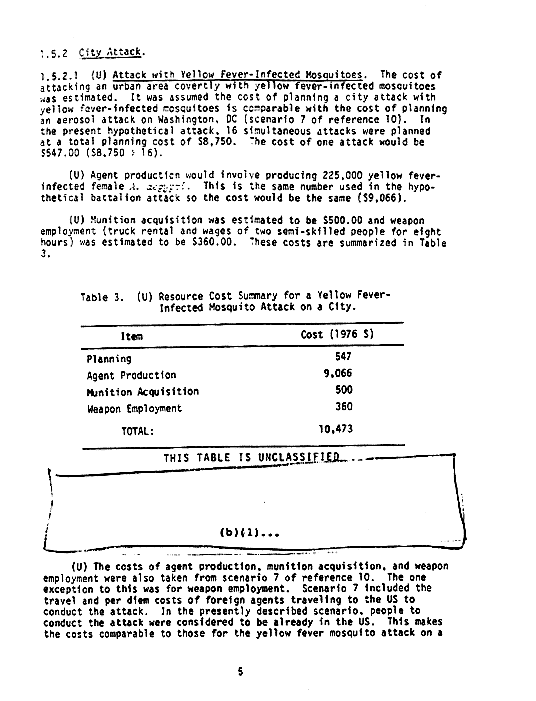 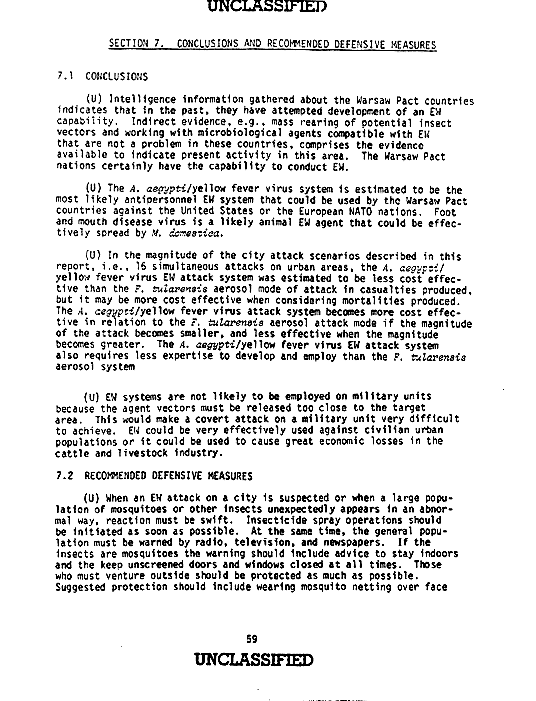 Later, in 1981, the military drew up plans to release 225,000 Yellow Fever-infected mosquitoes 610m upwind of a city and priced it out against an aerosolized tularemia attack, finding YF may be “more cost effective when considering mortalities produced.”
In 2015, a patent was granted for a “Toxic mosquito aerial release system” to TMARS Associates. This drone houses a mosquito breeding bin and release tube and allows the bugs to be weaponized with toxin-infected food. 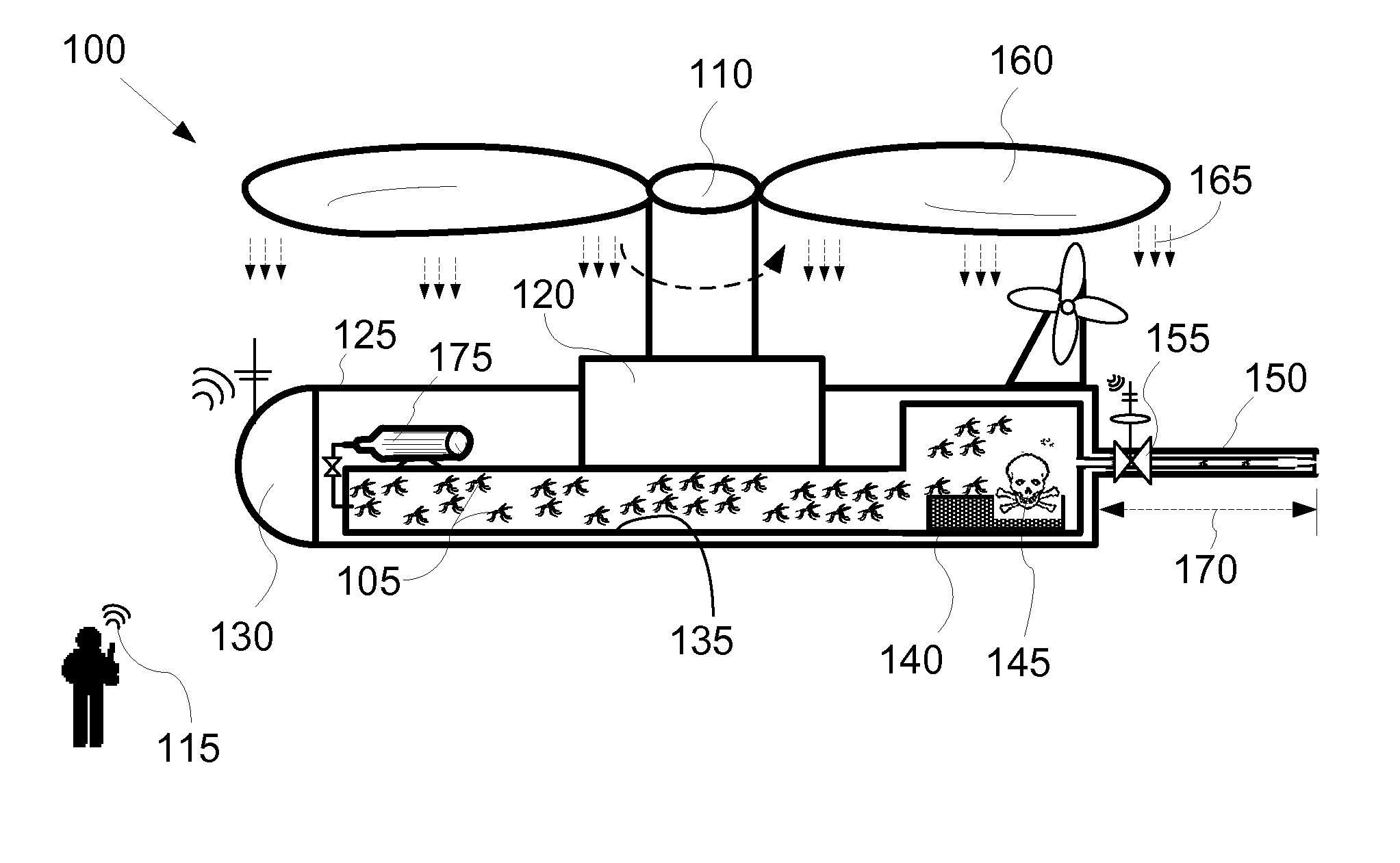 Dear "independent" fact-checkers, any comment on the "peaceful purposes" of this US patent for a Toxic Mosquito Aerial release system, granted in 2015? The invention includes a drone which can release infected mosquitoes that could spread bioagents pic.twitter.com/8Du6CLRdOc

An important point: these plans were drawn up well after the U.S. had signed onto the Biological Weapons Convention. They’re technically framed as defensive plans, though given history of the U.S. studying YF-mosquitoes as an offensive weapon, that defense is extremely thin.

We cannot say for sure that the government or U.S. Army Chemical Corps is using this deployment of mosquitoes for any nefarious purpose, but we can say that they have tested chemicals on our own citizens before in the past. I think that it is something that must be seriously considered, in the interest of public safety. We know the government has experimented on our own citizens and soldiers, without their knowledge or permission and then denied it for decades, despite serious repercussions and side effects. It is always good to be aware of the possibility and to have more knowledge rather than less.

Here is some further reading on this topic:

Bug bomb: Why our next terrorist attack could come on six legs

The Pentagon and bio-weapons

“Entomological Warfare”: US Army Researched the Weaponizing of Mosquitoes

Over and over again, the military has conducted dangerous biowarfare experiments on Americans

The history of biological warfare