~~Ed. Note: Recently the United States Department of Defense has  released to the public news of exciting advanced technologies ushering in an new era in national security and defense. Patriots will be interested in learning more about it.

In this time of COVID-19, Esper addressed the group virtually.

The secretary stated that America’s air, space and cyber warriors “will be at the forefront of tomorrow’s high-end fight.”

That means confronting near-peer competitors China and Russia. That means shifting the focus from defeating violent extremist groups to deterring great power competitors. It means fighting a high-intensity battle that combines all domains of warfare, he said.

“In this era of great power competition, we cannot take for granted the United States’ long-held advantages,” Esper said.

The last time an enemy force dropped a bomb on American troops was in the Korean War. “China and Russia, seek to erode our longstanding dominance in air power through long-range fires, anti-access/area-denial systems and other asymmetric capabilities designed to counter our strengths,” he said. “Meanwhile, in space, Moscow and Beijing have turned a once peaceful arena into a warfighting domain.”

China and Russia have placed weapons on satellites and are developing directed energy weapons to exploit U.S. systems “and chip away at our military advantage,” he said.

Russia, China, North Korea, Iran and some violent extremist groups also look to exploit cyberspace to undermine U.S. security without confronting American conventional over match. “They do this all in an increasingly ‘gray zone’ of engagement that keeps us in a perpetual state of competition,’ the secretary said.

The military guidebook for the future is the National Defense Strategy. The strategy calls on the military to divest legacy systems, reinvest savings in higher priority systems and make the tough choices required to break from the status quo and continue outpacing the competition, Esper said.

The fiscal 2020 Defense Department research and development budget is the largest in history, he said, and it concentrates on critical technologies such as hypersonic weapons, directed energy and autonomous systems.

“In the Air Force, specifically, we are modernizing our force for the 21st century with aircraft such as the B-21, the X-37 and the Next Generation Air Dominance platform,” Esper said. “Equally important, we are transforming the way we fight through the implementation of novel concepts such as Dynamic Force Employment, which provides scalable options to employ the joint force while preserving our capabilities for major combat.”

To realize the full potential of new concepts the department must be able to exchange and synchronize information across systems, services and platforms, seamlessly across all domains, he said. “The Department of the Air Force is leading on this front with the advancement of Joint All-Domain Command and Control,” Esper said.

This concept is part of the development of a Joint Warfighting concept that will drive transition to all-domain operations, he said.

“For these breakthroughs to succeed in any future conflict … we must maintain superiority in the ultimate high ground — space,” Esper said. 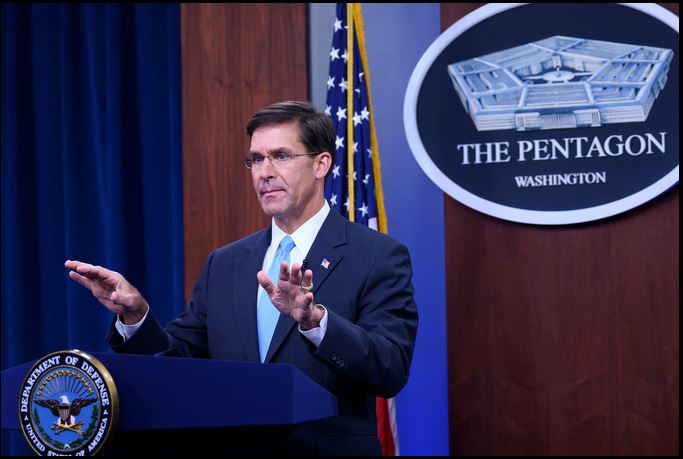 The military stood up U.S. Space Command a year ago, and Congress created the U.S. Space Force. The command is charged with operations and the USSF looks to man, train and equip the force. The new service has already submitted a budget and has released its first doctrine — Spacepower.

Cyberwar is a distinct possibility and DOD is looking to the department’s Digital Modernization Strategy to improve our capabilities and policies, he said. The military is working on game-changing technologies, such as artificial intelligence and 5G, and looks to move the fight into the cloud.

The Air Force is on the leading edge of DOD efforts to harness the power of artificial intelligence. “In collaboration with academia and industry, the Air Force’s AI Accelerator program is able to rapidly prototype cutting-edge innovation,” Esper said. One example of this was the AI technology used to speed-up the F-15EX acquisition program.