April 21, 2020 – In a stunning display of premeditated tyranny, current YouTube CEO, Susan Wojcicki announced that anything going against the narrative of an international and corrupt body called the World Health Organization (WHO) would be in violation of “YouTube Policies.”

Telling people to take their vitamins may get you in trouble with Youtube 💉 https://t.co/tyEB7fgDwg

According to investigative journalist Tom Parker of ReclaimTheNet.Org:

In her first interview since the coronavirus lockdown started in the US, YouTube CEO Susan Wojcicki discussed how the platform has responded to the pandemic by removing thousands of videos and sending over 10 billion views to legacy media outlets.

Wojcicki made the comments during an appearance on CNN reporter Brian Stelter’s Reliable Sources podcast where she mostly focused on the platform’s efforts to give people the ‘right information’ and stamp out ‘misinformation.’

‘We also talk about removing information that is problematic,’ Wojcicki said. ‘We’ve had to update our policy numerous times associated with COVID-19.’

When it comes to determining what YouTube classes as ‘misinformation,’ Wojcicki said that ‘anything that would go against World Health Organization [WHO] recommendations would be a violation of our policy’ – the same WHO that amplified China’s propaganda about there being ‘no evidence of human-to-human transmission’ of the coronavirus and criticized Taiwan after a Chinese propaganda campaign on Twitter.

And when it comes to the sources of ‘right information’ Wojcicki has chosen ‘authoritative sources’ (legacy media outlets) and public health organizations – many of which were downplaying the severity of the coronavirus and telling the public masks are not effective as recently as late March, only to change their rhetoric in April to position the coronavirus as a much more serious threat and recommend wearing masks. – ReclaimTheNet.Org

The article then goes on to name all the Orwellian steps YouTube has already taken, since the “outbreak” of the Coronavirus. This is no different from what the leadership of the Chinese Communist Party (CCP) does to its citizens without their consent. Censorship of information is the paramount reason the virus was able to spread around the world so quickly.

China had been censoring and suppressing information about the virus and anything that went against the designated narrative. With YouTube now announcing a similar plan, we must ask ourselves: Do Google’s and YouTube’s values align more with Communist China than America?

Dr. E. Michael Jones, a renowned author and historian says this is a form of political control. Dr. Jones was one of the first to point out that “free pornography” and “sexual liberation” were actually forms of domination and control. If you can control someone’s appetites and vices, you can control the person.

While they are emulating this vague, dubious and controversial Chinese Communist social credit score system of oppressing independent content and alternative media, YouTube has just announced a deal with their so-called “main competitor” Netflix.

This is not a real competitor at all, but rather both are allowed monopolies by the ruling class to serve as social engineering functions and as vehicles for propaganda. 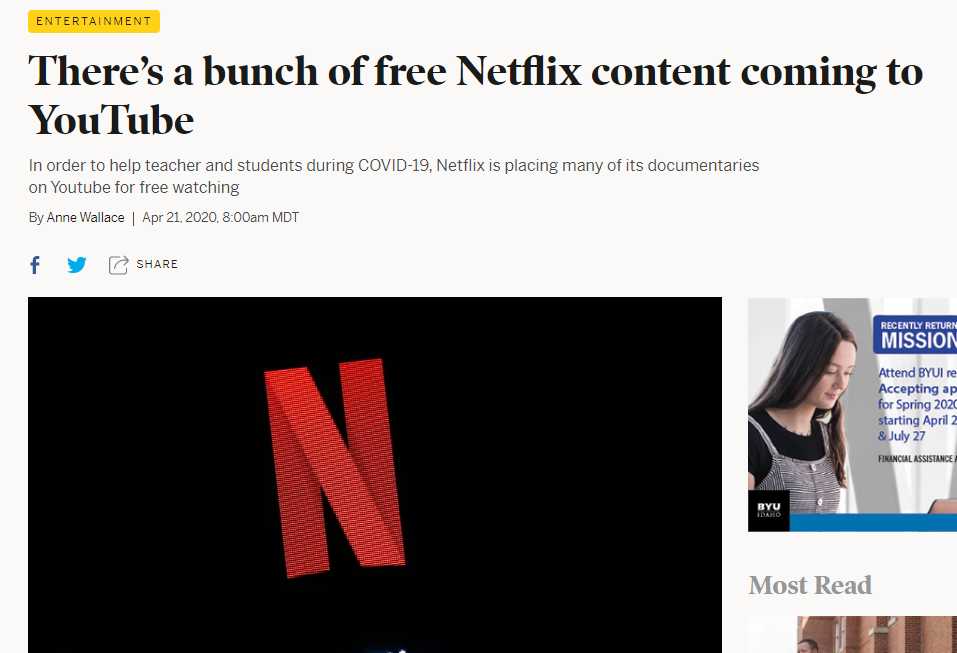 The article, by Anne Wallace, describes the deal between YouTube and Netflix as an accommodation to the public during the Coronavirus pandemic to provide “free” videos to YouTube:

In order to help provide teachers, parents and even interested students with educational content during coronavirus shelter in place orders, Netflix dropped an educational documentary playlist Friday on its Youtube channel, making top content available without a subscription.

In a press release, Netflix said it previously allowed teachers to freely screen documentaries in their classrooms for students. Now, this ways students and teachers — regardless of whether or not they are Netflix subscribers — can continue to learn from the platforms educational content.

In addition to the free documentaries, Netflix will also be releasing Q&As, study guides and additional educational materials corresponding with the shows on the playlist in order to further help provide remote learning experiences, Variety reports.

Of course the main theme of many of the available “free” documentaries is dominated by topics like “climate change” and “global warming” and could serve as models for indoctrinating youth into cults.

Seb Joseph of DigiDay discusses the latest in these disturbing trends in an article entitled “YouTube’s Latest Brand Suitability Targeting Updates Could Cost Content Creators“ where he states:

YouTube is making it easier for advertisers to block videos that are risky to their reputations, but in doing so could inadvertently push targeting without any proper context.

Previously, advertisers avoided content they felt wasn’t suitable for them on YouTube by looking through reports from ad verification companies to see whether the posts their ads had appeared on used risky keywords. From there, advertisers made a call on whether it was acceptable or even necessary to intentionally buy ads on those videos. With the beefed-up tools on offer from companies like Integral Ad Science and Zefr, those calls can be made before the ad has run to maximize their chances of appearing next to suitable ads.

While the tools create a clearer feedback loop for marketers to classify content and exert greater control over where their ads appear without sacrificing reach, some of them could inadvertently do the opposite.

Take Integral Ad Science’s brand suitability and contextual targeting tools, for example. Both tools include the pre-screened Google Preferred lineups that exclude high-risk channels and IAS’ own curated list of low-risk channels. For the channel inclusion list, IAS’ contextual intelligence technology is used for language and content classification, including the ability to classify kids’ content. The problem, however, is this sort of targeting happens at a channel-level rather than by video where there’s more variety to the type of content an advertiser would deem suitable.

Like keyword blacklists, channel-level targeting can be too broad as there’s still a chance advertisers could block specific videos on channels they’ve flagged as unsuitable. – Seb Joseph, DigiDay

This simply makes it easier for independent content creators to be flagged and suppressed, while multinational corporate backed legacy media is given a continuous leg up and moved to the top.

The same day that YouTube CEO Susan Wojcicki announced the new Orwellian censorship rules, the disgusting New York Times published a fake hit piece about YouTube. By making it appear she is under pressure from the “media, the NYT provides her the cover to censor content.” Interesting.

In fact, one of the sources cited in the NYT article is one of their own, “journalist” Kevin Roose, who finds essentially left wing activists who will spin any tale about being “radicalized” online. They don’t give out the full name of this “source” but we are supposed to believe this is a legitimate story: 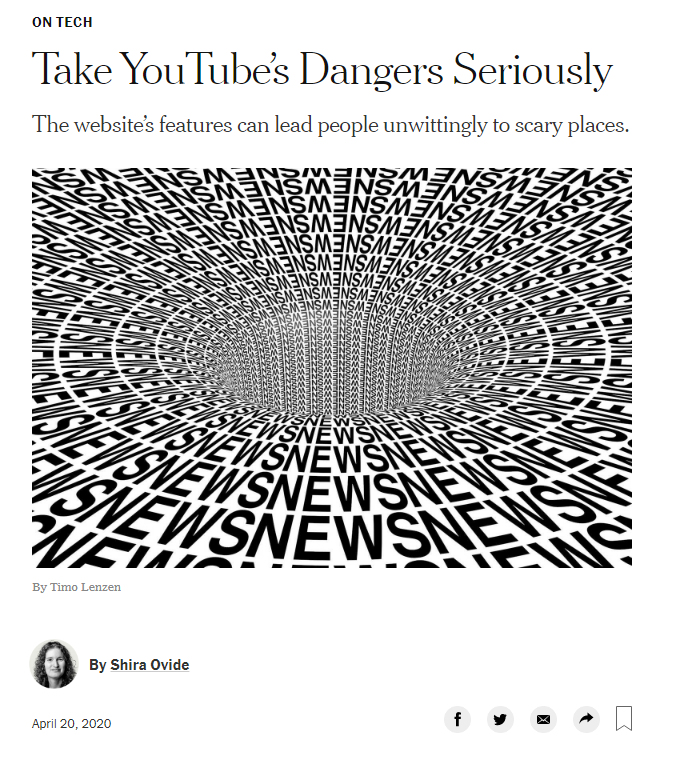 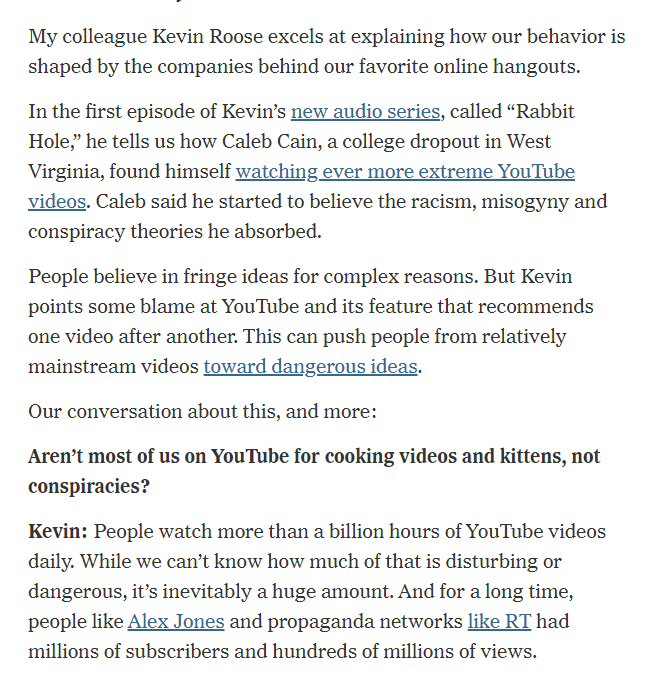 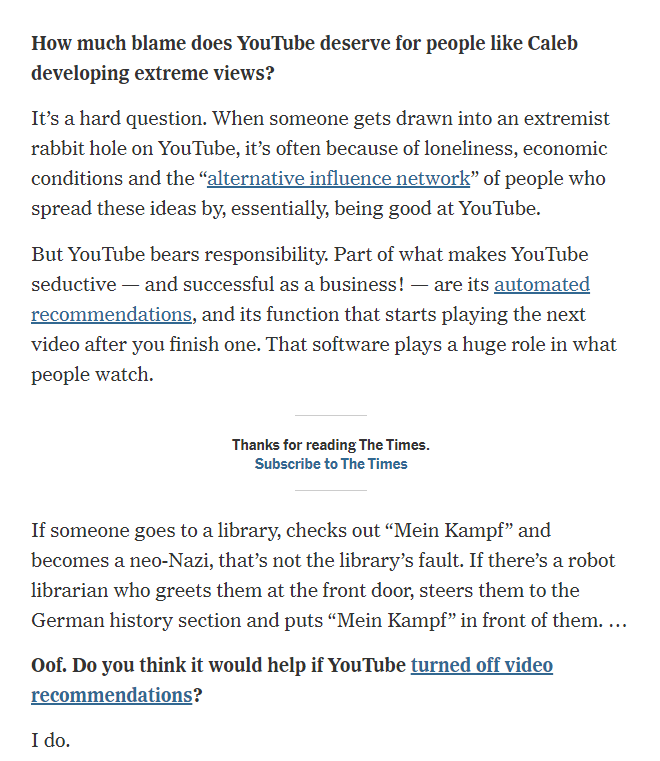 Of course the entire thing reads like an absurd leftist fan fiction novella. This is exactly how the legacy media provides cover for Silicon Valley tyrants. YouTube then rewards them with an “authoritative source” status and promotes their content, while censoring their legitimate competition, the alternative media.

Is anyone in the @realDonaldTrump administration going to address the Chinese communist style censorship happening @youtube right now?

Tyrannical state governors are locking us in our homes and big tech is shutting down our ability to share information before a major election🆘 pic.twitter.com/9vPEgLy0yl

This is part of the strategy of Silicon Valley to “slow-boil the frogs,” so to speak. It started as a slow drip and has now advanced to menacing river. Before it grows into a devastating flood, we must put a stop to the practice. Withdraw our support for these companies. They have gone too far. They went too far a long time ago and it’s time we started seriously moving to alternatives. Enough is enough.

The story of our censorship and tyranny under the boot of corporate fascism continues, please check back for updates.