LIVE NOW
We Ride at Dawn: with Rooster

April 3, 2020 – Google has announced it will be publishing location data from over 130 different countries to show how the Coronavirus “lockdowns” are working. They have created a section on their website for what they call “community mobility reports” where this data can be downloaded.

As you can see, they claim that this data is anonymized. However this is false. There is nothing anonymous about location data. 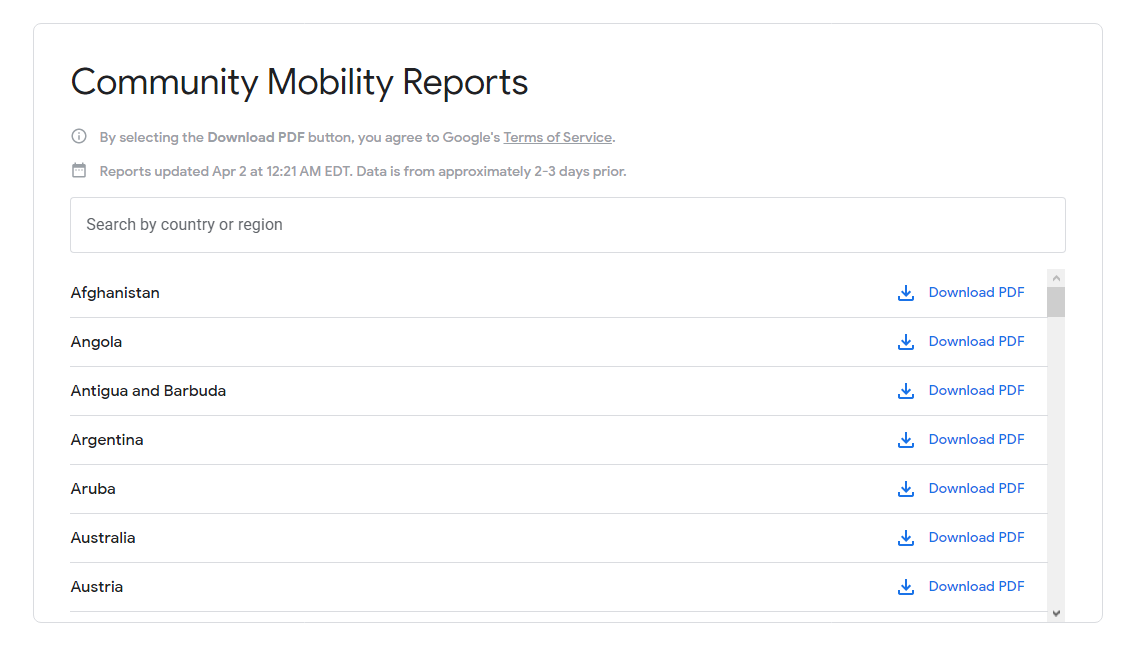 As you can see, they have an area on the site where you can find your country, then your state or city, and you can download the information. 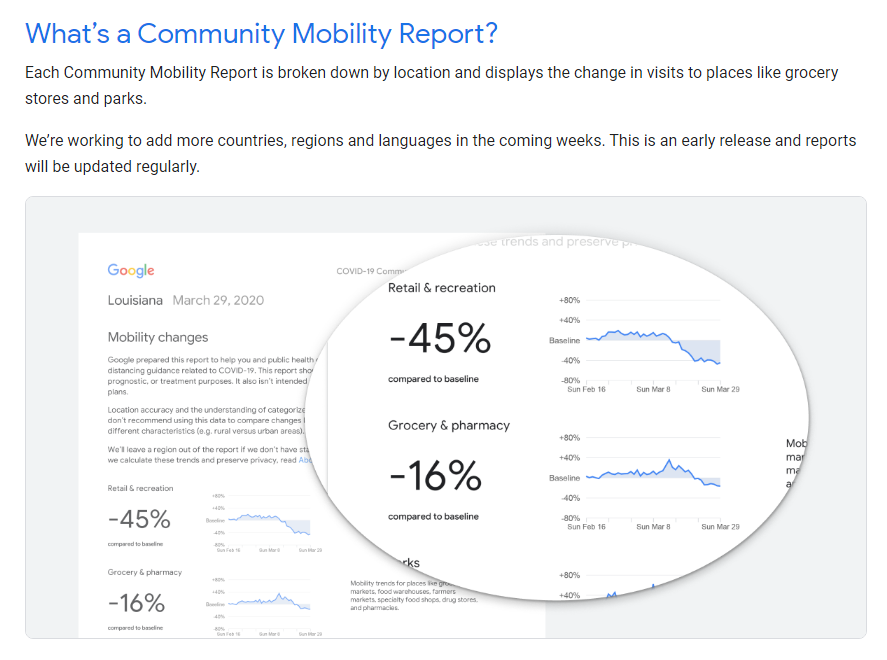 Here is an example of a “community mobility report.” As you can see, this can be narrowed down by location and can tell you how many people visited the grocery store. Google also claims they plan to update these reports to add even more countries and then will be publishing regular updates to each report.

This statement about preserving privacy is highly misleading. Most people are not aware that Google automatically has this location history turned on and creates a private log that is disturbing in its detail.

According to Leo Kelion from the BBC, in an article entitled ‘Coronavirus: Google reveals Travel Habits During the Pandemic,‘ this is not a big deal, and is just being done for public health purposes:

Google is to publicly track people’s movements over the course of the coronavirus pandemic.

The tech firm will publish details of the different types of places people are going to on a county-by-county basis in the UK, as well as similar data for 130 other countries.

The plan is to issue a regular updates with the figures referring back to activity from two or three days prior.

The company has promised that individuals’ privacy will be preserved.

The readings are based on location data gathered via the Google Maps app or one of the firm’s other mobile services.

The firm typically uses this to reveal when specific museums, shops and other places are busiest as well as to revise driving routes to help motorists avoid traffic.

Google said it hoped the information could be used by public health chiefs and others to help manage the outbreak.

The company says it has both anonymised the records and mixed in some randomly-generated data to safeguard individual users’ histories, device owners can also decide not to supply data.

‘The data may prove startling to people who are unaware of just how much information Google collects,’ remarked the BBC’s technology correspondent Rory Cellan-Jones.

It will also provide fascinating insights into how the lockdown is working – or was working 48 hours earlier.

‘And there could be unintended consequences. People could decide to avoid busy locations or they may be surprised at just how many people are going outside and decide to join them.’

She also criticised them for not doing more to crack down on false information. – Leo Kelion, The BBC

If we evaluate what Google is telling us rationally, it highlights an already existing and disturbing situation. Google is allowed to gobble up massive amounts of data and do whatever they want with it. And people are just okay with it without understanding the broader implications and dangers. This also falls in line with their larger plans for nudge-based societal shaping in near real time. This is essentially an attempt to shame people into behaving the way Google thinks is proper.

This is simply how large, powerful entities like Google achieve outcomes they desire — psychology over force of arms. Operant Conditioning for example is a type of associative learning process through which the strength or weakness of a behavior is modified by reinforcement or punishment.

Don Reisinger outlines this theory for Fortune Magazine in a report entitled ‘Google’s Selfish Ledger Collects Your Data to Change Society‘ that breaks down how Google uses concepts from behavioral analysis and psychology to manipulate people:

A couple of years ago, Alphabet’s X ‘moonshot factory’ conjured up a concept that describes how total and absolute data collection could be used to shape the decisions you make. And now a video about that concept has leaked online.

The video was obtained and published on Thursday by The Verge. It describes a so-called ‘Selfish Ledger’ that would collect all of your data, including actions you make on your phone, preference settings, and decisions you make, and not just keep it there for future evaluation. Instead, the ledger, which would be designed and managed by Google, would interpret that information and guide you down a path towards reaching a goal, or on a broader scale, doing your part to help solve poverty or other societal problems.

In one example, the video describes how the ledger would ask you to create a life goal. It would then tell you what kind of activities to engage in to achieve that goal. So, for instance, if you want to lose weight, the ledger would see that you’re shopping for food on your phone and direct you to buy a healthier option. The video even suggests that some of the recommendations would ‘reflect Google’s values as an organization’ to get you to reduce your carbon footprint.
While it’s unclear how Google would go about creating the technology, the implications could be major. The ledger would essentially collect everything there is to know about you, your friends, your family, and everything else. It would then try to move you in one direction or another for your or society’s apparent benefit. Privacy concerns and whether people would feel comfortable with a single company swaying public opinion would obviously come about if the ledger were ever pitched as an actual product.
In a statement to Fortune, an X spokesperson confirmed that the video is indeed real. However, the spokesperson said that it was developed under the concept of ‘speculative design,’ which aims at identifying alternative ways of doing things to spark debate and thoughts on ethics. – Fortune Magazine

So basically, Google says “don’t worry this was just a thought experiment to spark debate; we don’t actually have this product designed yet.” But it does seem that this is not just an experiment, but rather part of how Google designs its products. 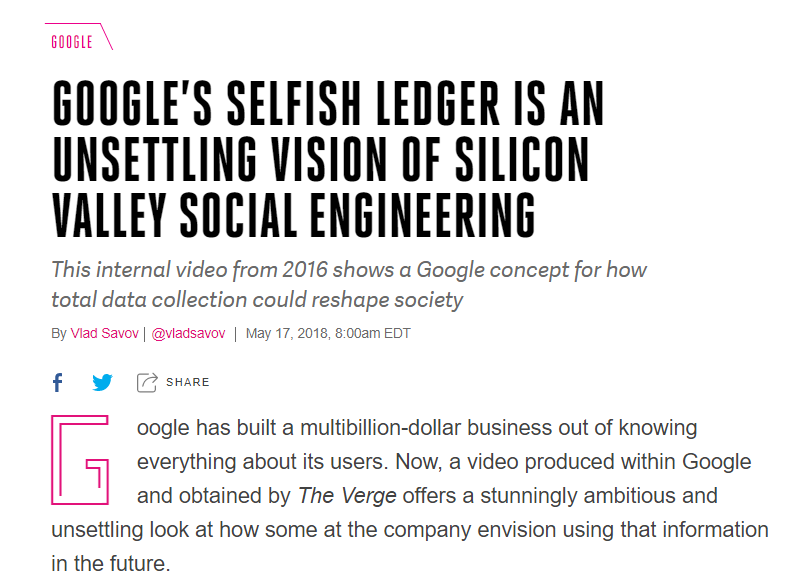 The Verge seems to understand the implications better than Fortune magazine and the expose they did on this is quite detailed and good. Written by Vlad Savov, the report breaks down how the “selfish ledger” would be used. It is chilling:

The video was made in late 2016 by Nick Foster, the head of design at X (formerly Google X) and a co-founder of the Near Future Laboratory. The video, shared internally within Google, imagines a future of total data collection, where Google helps nudge users into alignment with their goals, custom-prints personalized devices to collect more data, and even guides the behavior of entire populations to solve global problems like poverty and disease.
Titled The Selfish Ledger, the 9-minute film starts off with a history of Lamarckian epigenetics, which are broadly concerned with the passing on of traits acquired during an organism’s lifetime. Narrating the video, Foster acknowledges that the theory may have been discredited when it comes to genetics but says it provides a useful metaphor for user data. (The title is an homage to Richard Dawkins’ 1976 book The Selfish Gene.) The way we use our phones creates ‘a constantly evolving representation of who we are,’ which Foster terms a ‘ledger,’ positing that these data profiles could be built up, used to modify behaviors, and transferred from one user to another.

The so-called ledger of our device use — the data on our ‘actions, decisions, preferences, movement, and relationships’ — is something that could conceivably be passed on to other users much as genetic information is passed on through the generations, Foster says.

Foster’s vision of the ledger goes beyond a tool for self-improvement. The system would be able to ‘plug gaps in its knowledge and refine its model of human behavior’ — not just your particular behavior or mine, but that of the entire human species. ‘By thinking of user data as multigenerational,’ explains Foster, ‘it becomes possible for emerging users to benefit from the preceding generation’s behaviors and decisions.’ Foster imagines mining the database of human behavior for patterns, ‘sequencing’ it like the human genome, and making ‘increasingly accurate predictions about decisions and future behaviours.’

‘As cycles of collection and comparison extend,’ concludes Foster, ‘it may be possible to develop a species-level understanding of complex issues such as depression, health, and poverty.’ – The Verge

This is the real goal of Google. You can watch the 9 minute video about the selfish ledger here:

To learn how to opt out of Google location history tracking, this article provides a detailed, step-by-step instructions with pictures that are helpful.

In conclusion, Google is using implied consent to get away with this. The primary issues are that the data is being used without permission. It’s invasive and wrong, and just part of Google’s larger trend of gobbling up data they have no business holding. The second issue is the source of these ‘nudges.’ Google is a private entity. Why are they doing this? What right do they have?

This is about the deeper vision within Google — to leverage massive amounts of personalized data to create a feedback loop that allows them to write the software of society, with your nervous system being the operating system they want to program. By seizing on the Coronavirus crisis, perhaps Google sees this as the perfect time to try to implement some of these society shaping tools. We cannot allow a private entity with questionable goals and motives to have this much power over not just America, but the world. Google is already under investigation for anti-competitive business practices. Perhaps it’s past time to shine the light on some of their other less savory practices: trying to condition you and your children.