Washington DC — October 20, 2020 — The U.S. Department of Justice, along with eleven Attorneys General have filed suit against Google, Inc. for monopolistic and anti-competitive business practices today in the U.S. District Court for the District of Columbia.

Senator Josh Hawley called the decision a “good start” in taking action against the search giant.

I attended the Pen & Pad Virtual Briefing this morning headed by Assistant U.S. Attorney General Jeffrey A. Rosen, here is the recording from that conference call:

Although I jumped to get into the queue, I was not able to ask the question I had.

I reached out to the DOJ Public Relations Office with the following:

These are the kinds of questions that should have been asked.

Those are all Republican AGs. Google has bought off the Democratic Party. pic.twitter.com/hV79Rju4fp

Interestingly, the Democrat Attorneys General were not interested in holding Google accountable. One has to wonder just how much Google has donated to their political careers?

The same way monopoly power companies are forced to let smaller companies use the power grid and infrastructure they built, Google should be forced to allow other companies to use their search algorithms.

Chris Menahan of Information Liberation is totally correct here in that these big tech companies have become essential utilities, just like the telecommunications companies.

Other companies should be allowed to provide Google's organic search results rather than results which are censored by Google's 10,000 strong "army" of social justice warriors. https://t.co/B9TUgbXKkg

This is another issue entirely. While the Complaint filed today addressing violations of Section II of the Sherman Antitrust Act of 1890, it does not address Section 230 of the Communications Decency Act which is what provides them with immunity as a neutral platform(s). They are no longer neutral platforms, they have been acting as publishers, editorializing and squelching legitimate news, going so far as to block news from publication.

U.S. Department of Justice and several states have accused Google of stifling competition in order to maintain its monopoly in antitrust lawsuit https://t.co/CCQX8eL7GE

Law 360 no longer provides the same level of neutral publishing it once prided as its hallmark.

Whenever a Big Tech giant gets accused of anti-competitive behavior they point to another Big Tech giant to try and suggest that at least they're not as bad as the other…They're all as bad as each other.https://t.co/IgWn84700W pic.twitter.com/6zVT8P2qzu

Google has tried to deflect from the issues by pointing to Microsoft and claiming they are the real monopoly. This is absurd. The Department of Justice pursued Microsoft 20 years ago for the same kinds of things Google is doing today.

Google program manager: corporations are "playing God", and "taking away freedom of speech"https://t.co/pDeM8PDjGP

Yet another Google whistleblower has come forward to provide testimony about how Google puts their thumb on the scale, and is biased against conservatives. He also related that Google made him travel to train Chinese replacements, which begs the question — just how deeply has Google been penetrated by the Chinese Communist Party?

The Justice Department will file an antitrust lawsuit against Google today, alleging the company engaged in anticompetitive conduct to preserve monopolies in search and search-advertising that form the cornerstones of its vast conglomerate. https://t.co/RNDftLZghJ

The Wall Street Journal seems to have the best understanding of the real issues underlying the Complaint and why they are so important. They published a long form expose today.

MORE: The long-awaited lawsuit follows a years-long investigation into the tech giant and lays the groundwork for one of the most significant confrontations between the U.S. government and a web company in decades. https://t.co/3vPqL6892E

Though an important start, I do not believe today’s actions go specifically or deeply enough, unfortunately. I hope there is still more to come in the weeks and months ahead.

DOJ is filing suit today alleging Google has been abusing its online search dominance to stifle competition, source tells @AP. It's the feds' most significant act to protect competition since a groundbreaking case against Microsoft more than 20 years ago. https://t.co/4QHcpF5rfG

Google has long been criticized for working with the Chinese Communist Party while simultaneously declining to work for the U.S. Military.

CEO of Alphabet, Inc and its subsidiary Google LLC, Sundar Pichai should be brought back in front of Congress and the American people to explain what actions he will take to remedy the multitudinous issues at the company.

From the Press Conference Packet, we get some background information on today’s case: 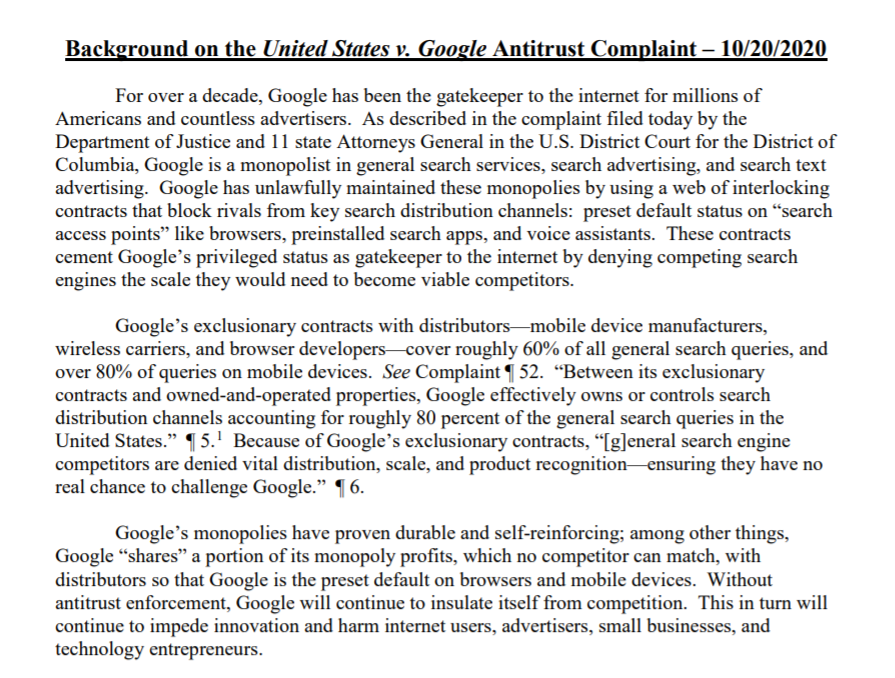 As you can see, this is a wide-ranging probe. 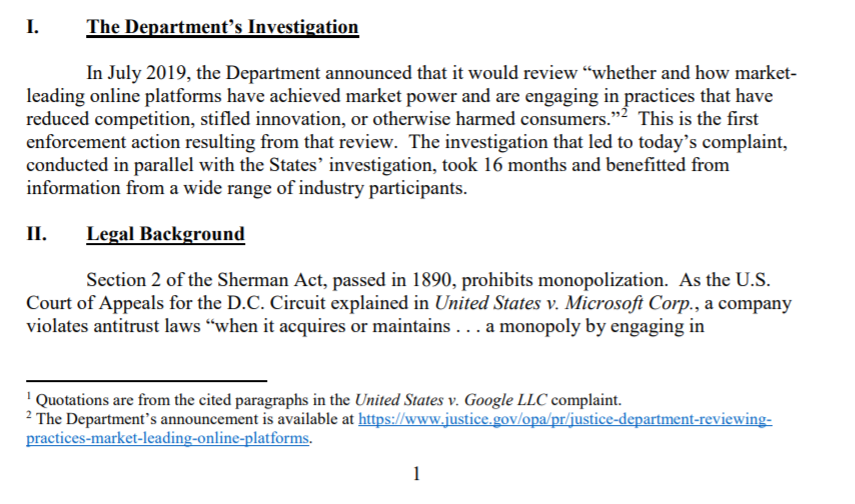 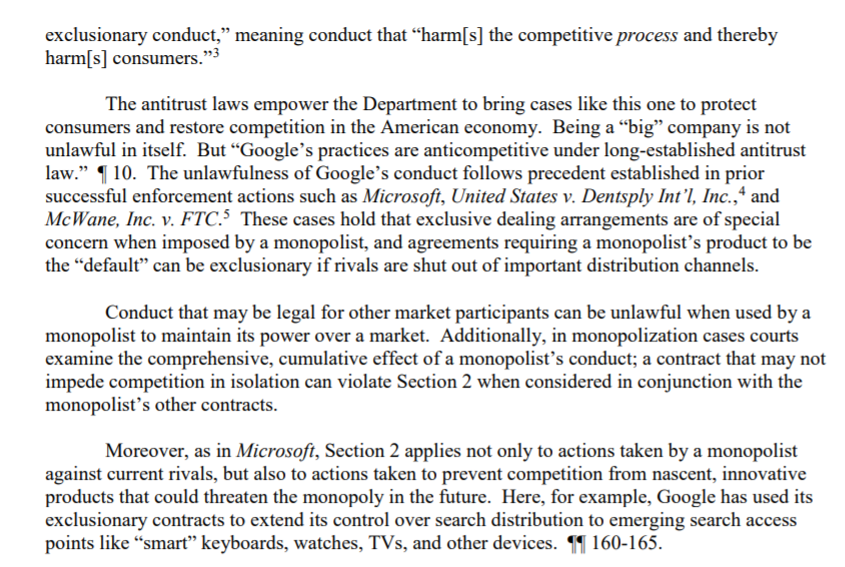 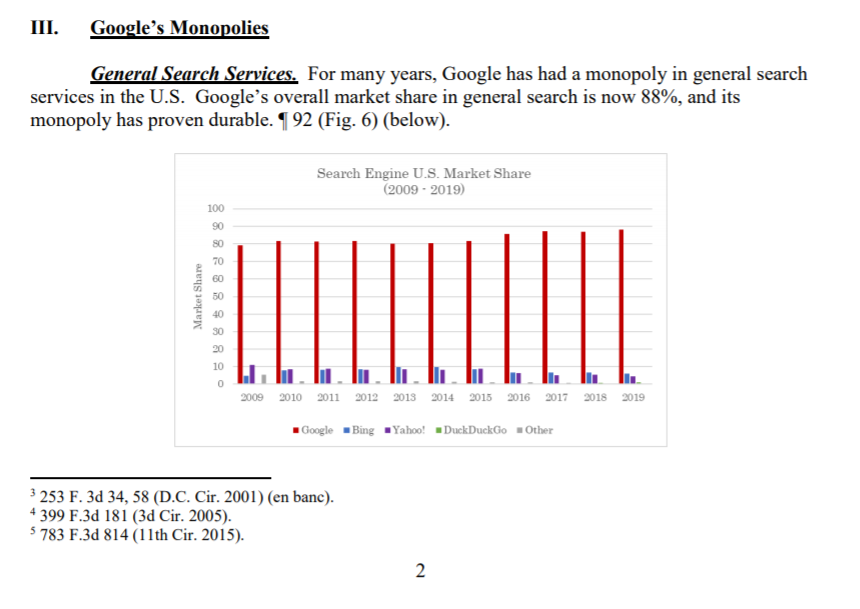 From a legal perspective, the background on this case shows that Google has a tremendous monopoly and in fact, the case should have been brought long ago. 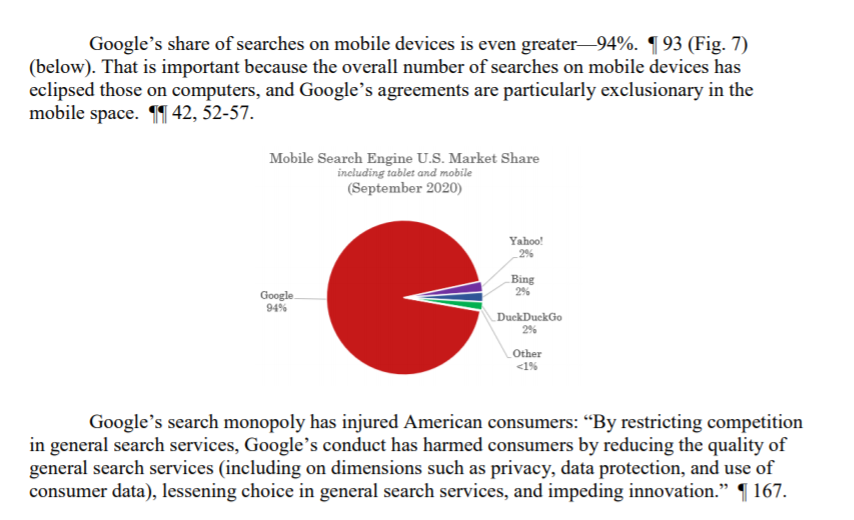 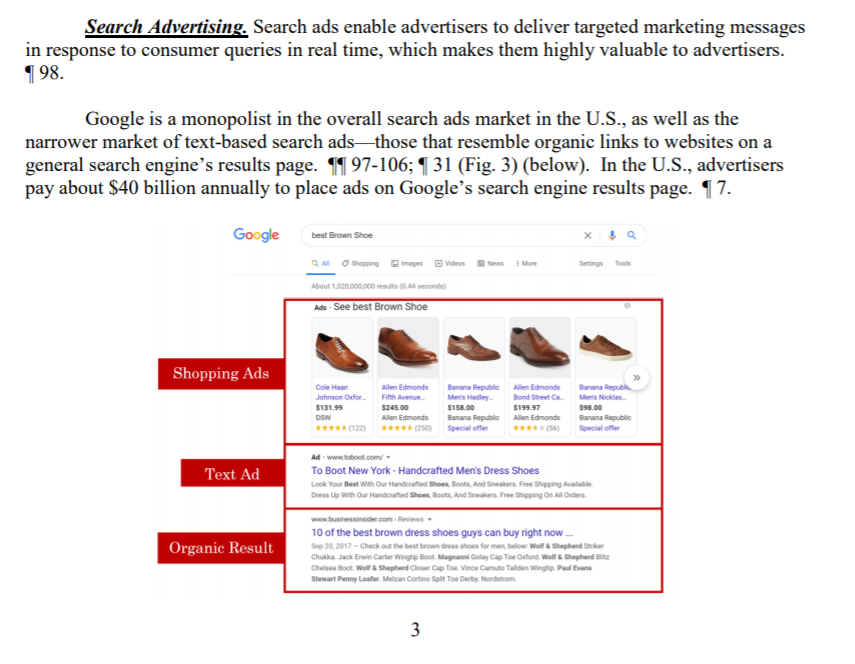 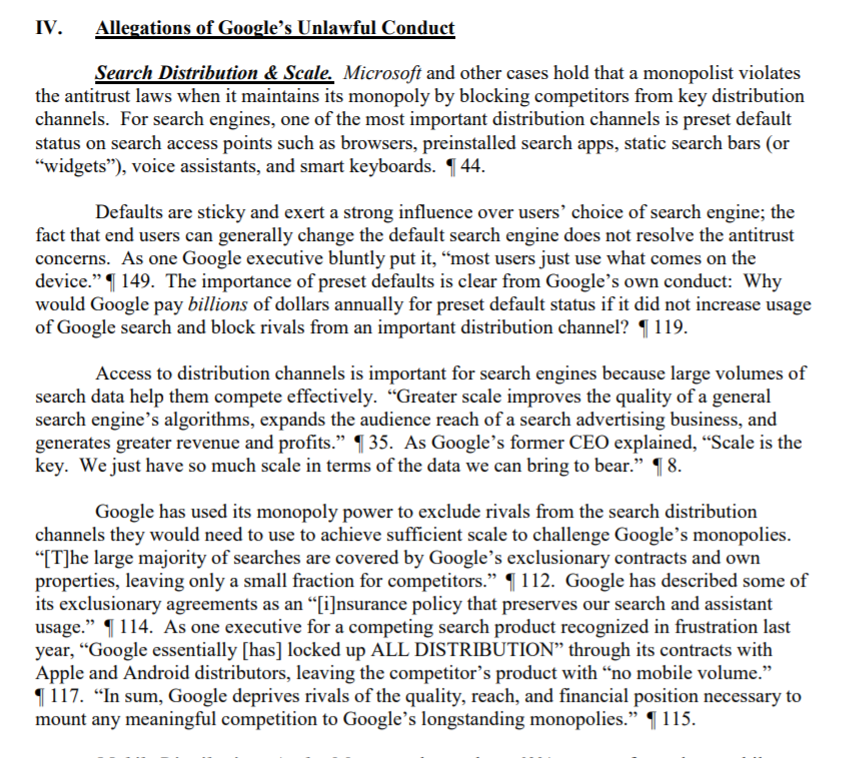 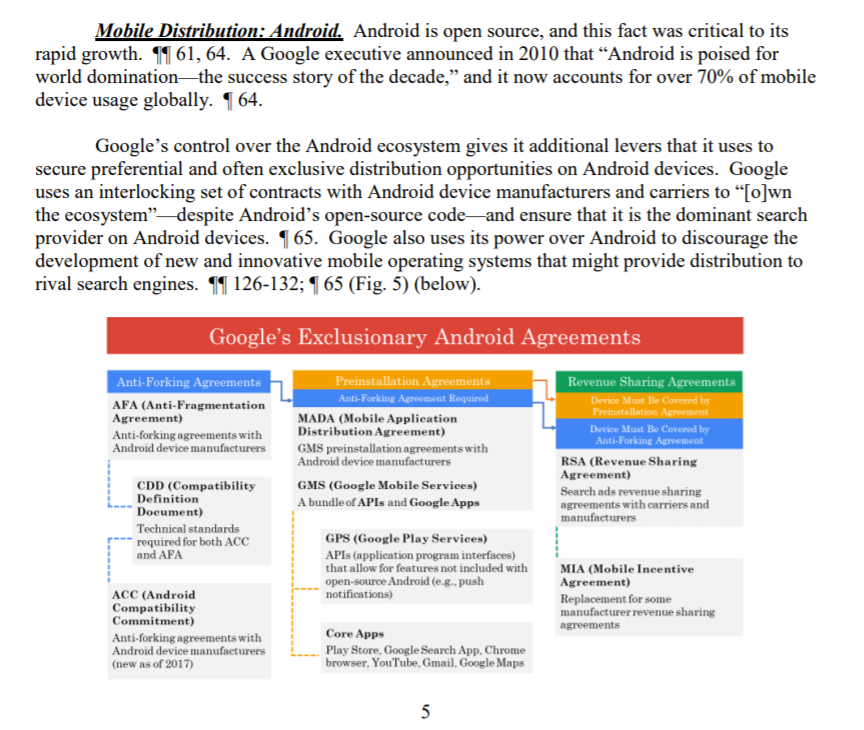 As you can see, Google operates monopolies in many parts of the consumer electronic industry. When smaller companies got in their way, they simply forced them out or bought them up. 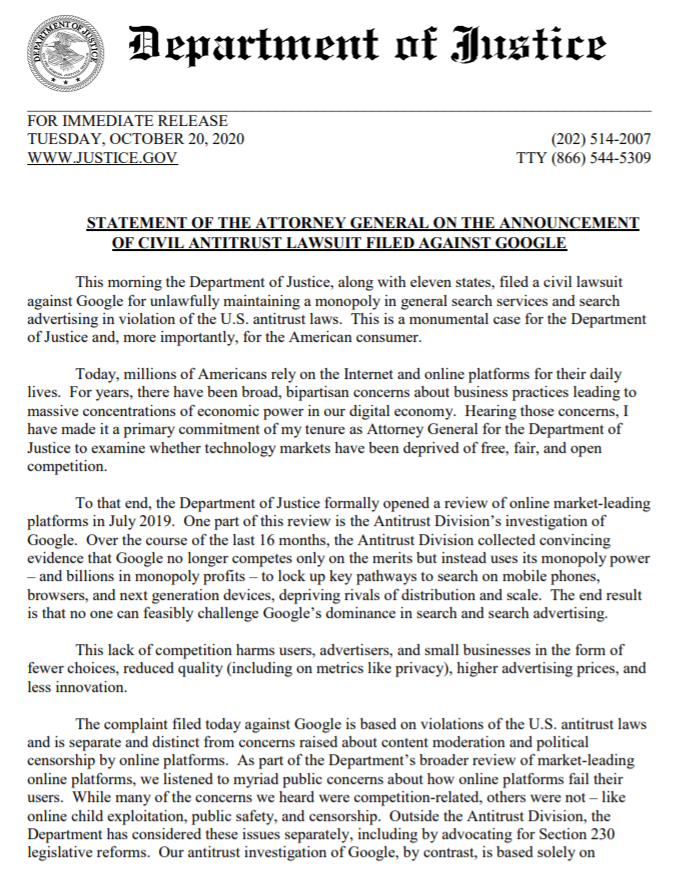 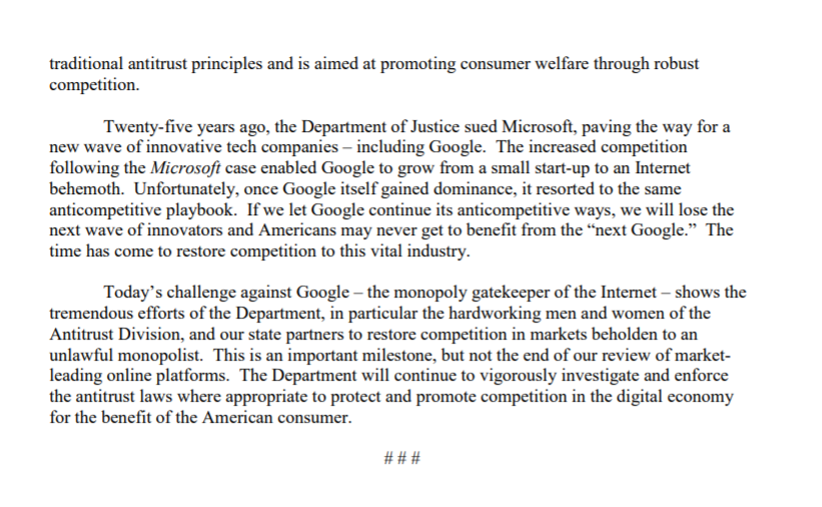 Today’s statement by Attorney General William P. Barr clearly sends a shot across the bows of all of these big tech companies, that if you are engaged in illegal conduct, the U.S. Department of Justice can and will enforce the law and come after you. 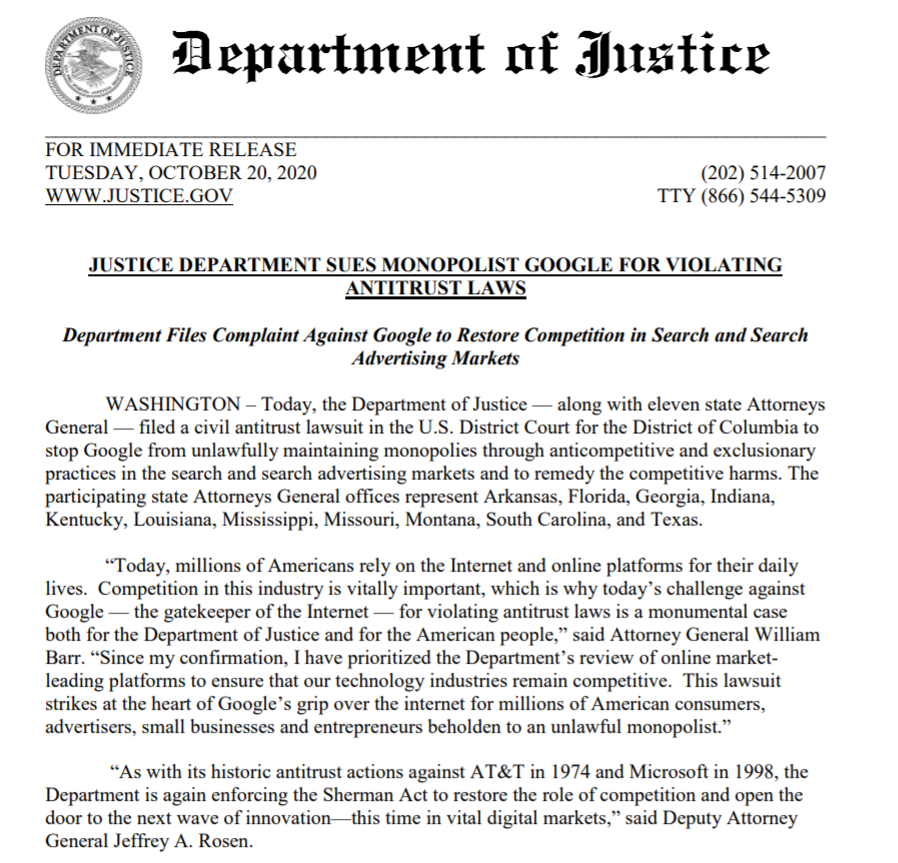 Deputy AG Rosen published a three-page statement on the case as well. 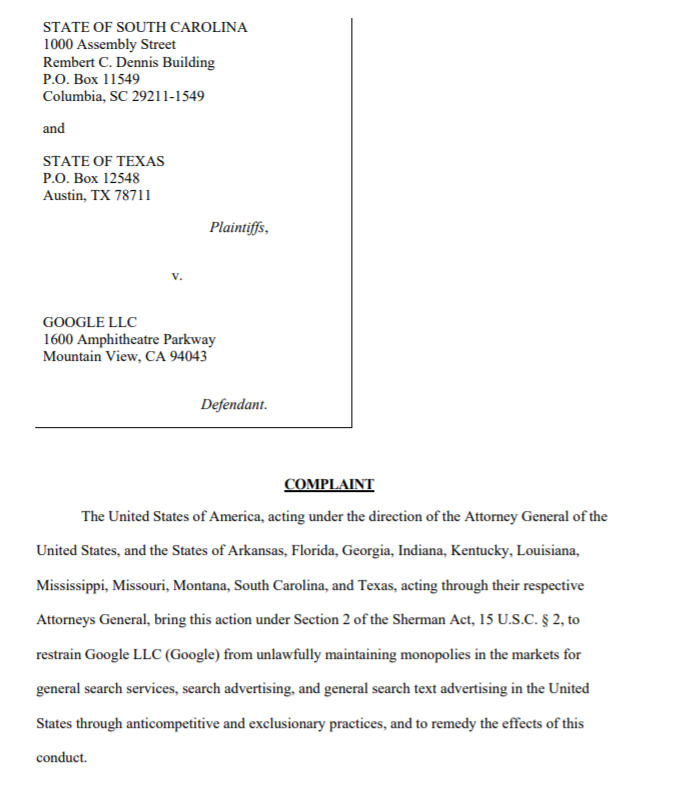 And finally, we have the 64-page Complaint itself.

The Justice Department declined to answer when asked whether or not they had spoken to Larry Page, former co-founder of Google. Interestingly, no question was asked about Sergey Brin, the Moscow-born second co-founder whose sister-in-law, Susan Wojicki, currently heads up Google’s YouTube. Brin’s wife, Anne Wojicki currently runs 23andMe, a DNA database and testing company.

This story is still on-going, we will continue to update if the Department of Justice responds to our request for comment.