Bill Pulte wants to decentralize philanthropy and his #TwitterPhilanthropy movement appears to be doing just that.

Bill Pulte has given away over $200,000 of his own money in just a few short weeks with this movement, including a new Tesla along with two other new cars, multiple bitcoin and $10,000 cash giveaways, putting up an initial $10,000 reward for a missing veteran (now a $30,000 reward), covering the expenses of 2 funerals, and many other needs that he and his team were made aware of. Several times a day Pulte and his team will tweet out a need to their Twitter followers, called teammates, and the needs are always met quickly. These needs can include veterans facing foreclosure, food for a mother and her children, air conditioners needed in high heat areas, Amazon school supply lists for teachers, and much, much more.

The team has started calling those needs under $1,000 “lightning strikes” and the vast majority are met within 10 minutes of posting them. Here is a list of the needs met just in the last week through #TwitterPhilanthropy and their teammates: 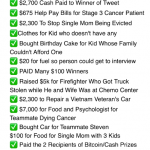 Bill has said he is totally flexible for where this movement goes and repeatedly asks for input from his teammates. This has led to, among other things, the launch of their new website, https://teamgiving.com/ which just launched in what they are calling “Phase 1” and is a move towards eliminating as many fees as possible that are taken from donations through other methods.  The site currently shows three needs that can take donations, allows people to apply if they have needs of their own, and lets people sign up to become a philanthropist themselves and join the team.

Pulte has put out many challenges to prominent people on Twitter that if they retweet his tweet, he will donate money to a need. Most have accepted his challenge, none bigger than President Donald Trump, whose retweet caused a $30,000 donation to a veteran. One may think this would bring politics into the movement, but Bill and his teammates are always quick to stop any attempt to do so. 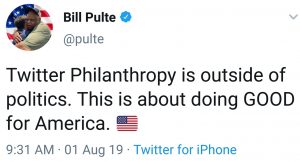 Growing from around 50,000 followers a couple months ago to over 630,000 followers at the time of this article has led to receiving thousands of messages every day. Many teammates have stepped up to volunteer their time and efforts when Bill asked, including Josh (@philanthropy_pa), the “Head Elf to @pulte for #TwitterPhilanthropy”, who talks to Bill 10 to 20 times a day for whatever the needs of the day are. He is helping Bill build a network of teammates all over the country who help sort through and verify all the requests they receive.

This has all happened in just a few short weeks so far. What will the rest of the year, 2020 and beyond bring for Bill Pulte and #TwitterPhilanthropy?