The Complaint, issued the same day Snowden’s book Permanent Record debuted, is for two counts of Breach of Contract and Fiduciary Duty related to the publication of Permanent Record and to all his speeches.

Snowden, who is believed to be in Moscow, Russia was a Central Intelligence Agency (CIA) contractor from 2005 to 2006 until he was hired as analyst August 2006 until 2009. He also was a contractor for the National Security Agency (NSA) at different points in time between 2005 and 2013. His last position was as an NSA contractor employed at Booz Allen Hamilton, a defense contractor.

As a condition of employment or contracting in all these positions, Snowden signed Secrecy Agreements. These agreements for both required that before disclosing any information publicly, either orally or in writing, that Snowden receive written permission to do so. This requirement pertains to current and former employees. The agreements also state that if he did not receive permission then all proceeds would be forfeited to the United States Government. “In addition to any other remedy to which the United States Government may become entitled, I hereby assign to the United States Government all rights, title, and interest in any and all royalties, remunerations and emoluments that have resulted or will result or may result from any divulgence, publication or revelation of information or material by me that is carried out in breach of (the prepublication obligation in) paragraph 5 of this agreement or that involves information or material prohibited from disclosure by the terms of the this agreement.”

The CIA and NSA both have a staff devoted to reviewing these disclosures and a timeline to turn the decision out.

On August 1, 2019 Snowden announced on Twitter that he had written Permanent Record. 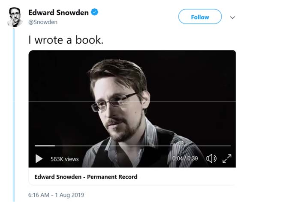 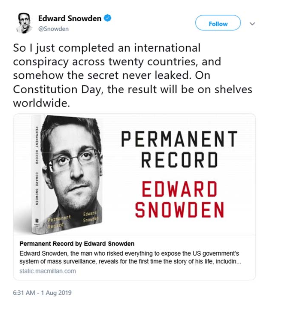 Macmillan also issued a press release in which they stated, “Edward Snowden, spy, whistleblower and the Internet’s conscience, reveals the story of his life for the first time, from his suburban childhood to clandestine CIA and NSA postings and his decision to try to bring the US government’s system of mass surveillance down. Permanent Record is a crucial memoir for our digital age.”

The complaint alleges that this is a direct violation of his signed Secrecy Agreements in that he is writing about information that is classified, among other things. The signed agreements also require that he receive written permission prior even to approach the publishers and speak about his manuscript. This permission had not been given.

As such, the complaint seeks to seize all profits that have been received as a result of the publication of Permanent Record. Macmillan has no legal claim to any of the earnings since “Snowden’s Earnings have resulted, and will continue to result, from Snowden’s unlawful breaches of his contractual obligations and fiduciary duties to the the United States, CIA and NSA”. Ben Wizner is listed as Snowden’s principal legal adviser. (Wizner is also the Director of the American Civil Liberties Union Speech, Privacy, and Technology Project.)

In addition, since 2014 Snowden has been giving speeches in which he commands over $10,000 per speech. He has made over $200,000 in one year for these digital appearances.

The complaint alleges that many of these speeches contain or refer to information that is classified and would only be obtained by working at either the CIA or NSA. These speeches also require written approval prior to discussing any details to speak. In the absence of written approval, all of Snowden’s earnings are subject to forfeiture and must be assigned to the United States Government.

Snowden’s book and speeches, alleges the complaint, have harmed the United States inter alia (among other things) by undermining the confidence and trust in the CIA and the NSA.

The government is suing for the Court to declare that Snowden breached his contractual obligations, for a constructive trust to be imposed for the benefit of the US (relating to his book and speeches), require an accounting of all monies received’ and to require Snowden and his agents to relinquish the proceeds. In the case that the monies are no longer in Snowden’s or his agents’ possession, they ask for a temporary restraining order and preliminary injunction to freeze all the assets in Macmillan’s possession. They also ask for a permanent injunction (an Order to Compel) Macmillan to transfer to the United States all the proceeds derived from Permanent Record as well as permanently enjoin (stop) from any future violations of his contract such as speeches or books.

This story is ongoing and will be updated as the case moves through the legal system.