“A source said prison staff were seen rushing through the well-lit corridors at around 1:30 AM EST on July 23.

Screams were heard by other inmates, the source said.

A witness described Epstein, 66, as being “blue in the face” and “sprawled out on the floor” while being tended to by prison staff.” – Radar Online 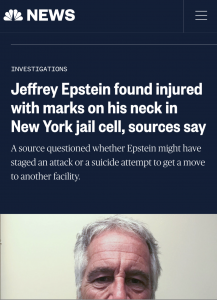 It was then reported by NBC News, New York that Epstein had injuries to the neck area.

The Daily Mail reported that:

“A third source said that first two sources were greatly exaggerating the situation however, and suggested this was all a ploy being carried out by Epstein himself as he attempts to get out from behind bars while he awaits his federal sex trafficking trial.

Epstein could have also been attacked by a fellow inmate or prison employee, with sources stating that prison workers are still unclear about what happened that night.

The Federal Bureau of Prisons confirmed that Epstein is back in his cell but would not comment further about the incident, citing privacy concerns. “

It remains unclear what the exact cause of the incident actually was. Whether it was a failed attempt to get out of prison after appealing his denial of bail, an attack by a fellow inmate or a self-inflicted injury is unknown.

This comes after another alleged child sexual predator Keith Raniere of the NXIVM sex cult was also assaulted in prison this past week. From the Frank Report:

“Shortly after being returned to the Metropolitan Detention Center (MDC) after his stunning conviction on all charges, Raniere got jumped by three Mexican inmates.

No word yet on whether any of them suffered any injuries but we do have a scorecard for the former Vanguard:
– Multiple bruises
– A couple of cracked ribs
– A broken toe
– Lots of tears

The “good news” is that he got to spend a few days in the medical ward – which meant that he was out of harm’s way for a little while.

The “bad news” is that he was cuffed to the bed frame that entire time – and guarded 24/7 by an MDC guard.”

It could be that alleged child sexual predators just don’t do well in prison.

Epstein injured in Jail. nbc 7-24-19 Attorney for Tartaglione said any claim Tartaglione assaulted Epstein "is absolutely not true.
Tartaglione & Epstein have been complaining about conditions inside MCC including flooding, rodents & bad food.”
Epstein is on suicide watch. P.3 pic.twitter.com/rjf569ZQRk