WASHINGTON D.C. – July 28, 2019 President Trump announces, via Twitter, that John Ratcliffe will replace Dan Coats as the next Director of National Intelligence. 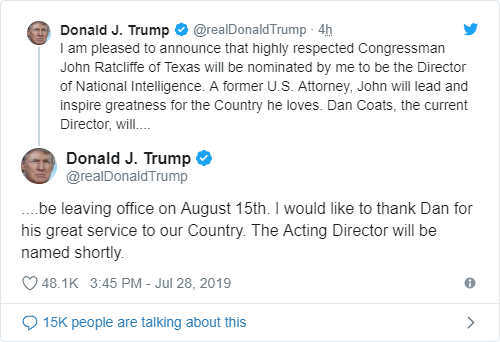 An unapologetic critic of the FBI and the Special Counsel’s investigations into Russian meddling in the 2016 presidential election and then-candidate Donald Trump’s collusion with the Russians, Ratcliffe will take over as the Director of National Intelligence.

“Rep. John Ratcliffe (R-TX) eviscerated former Special Counsel Robert Mueller for flouting Justice Department policies as well as the principle of presumption of innocence by declaring he could “not exonerate” Donald Trump of obstruction of justice.

Ratcliffe asked Mueller, who testified Wednesday on Capitol Hill to the House Justice Committee, wherein Justice Department policies and principles is there a legal standard where a person not found guilty of a crime is considered “not exonerated.” Breitbart

Dan Coats, the current director, has had at times, differences of opinions with President Trump, while Ratcliffe has been one of Trumps, staunches supporters. “Coats declined to include immigration among the top threats facing the United States during his ‘annual threat assessment’ before Congress in January when Trump was calling it a national security threat. That same month, Ratcliffe voted against the appropriations bill to end a government shutdown because it did not include all the funds Trump had requested for a border wall and “ensure our national security needs are met.” USA Today

Back in 2018, Ratcliffe was being named by Republicans as a strong choice for Director of the DOJ. House minority leader Kevin McCarthy, Matt Gaetz, Mark Meadows, Mike Johnson, and Mike Walker all thought he would be a good choice. “Look, it’s the President’s choice … but one thing I know is John Ratcliffe probably has the best abilities to do the job and most knowledge to do the job,” McCarthy told The Hill“ November 16, 2018.