NEW YORK, NY – A new law went into effect on August 14, 2019, in New York State known as the Child Victims Act which allows for the lifting of the statute of limitations on civil suits for one year so that victims of abuse can have their day in court. Although this bill was passed on February 14, 2019, the provision that allowed for civil suits to be filed in cases that were outside the statute of limitations went into effect on Wednesday. This is a unique but limited window of opportunity for victims of child sex abuse to come forward, regardless of how long ago the abuse took place, and seek justice and recompense for their suffering.

Previously the state had strict limitations for claims of child sexual abuse that required actions or charges be brought by the victim against their alleged abuser by the age of 23. This new law passed in February greatly expands those limitations by paving the way for victims to pursue criminal complaints up until age 25 for misdemeanor charges and age 28 for certain felony charges. In civil cases, victims of childhood sex abuse will now be able to file lawsuits against their alleged abusers up until age 55.

The new law not only expands the statutory limitations, it also allows for adult survivors who were previously barred by the statute to file suit within a one year window starting August 14. This also includes lawsuits and notices of claims (required for suits against public institutions) that were previously dismissed on the basis of being filed too late or outside the statute in existence at that time.

The reasoning behind this new law stems from the assertion that victims of sexual abuse as a child are often reluctant to come forward or even come to terms with their abuse so early into adulthood. The bill states in its justification for the legislation that it can take survivors a very long time to come to terms with and/or report the abuse they have suffered and estimates that time to be as high as 52 years old on average. The fear and shame many victims feel as well as the difficulty for many victims to deal with their trauma often contribute to their delay to take action. Those delays have cost many victims within the state their time in court which is precisely what this legislation seeks to remedy.  The full text of the legislation can be viewed Here 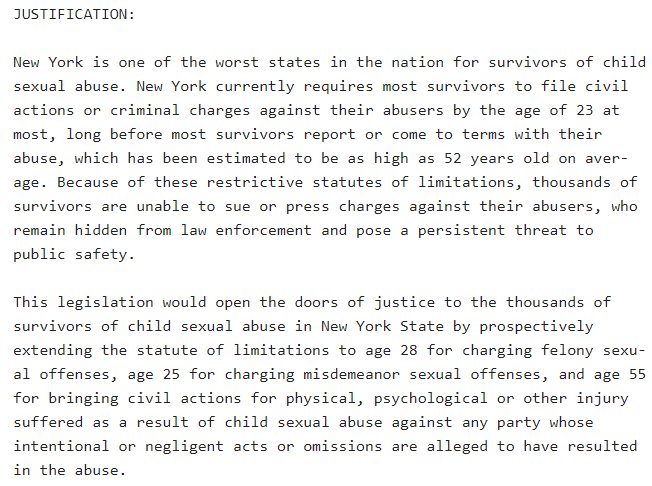 Some survivors are already coming forward and pursuing legislation against those who they claim abused them. On Wednesday, Jennifer Araoz filed suit against the Estate of Jeffrey Epstein, Ghislaine Maxwell and three others listed as Jane Doe 1, 2 and 3 for claims of sexual abuse she endured from the convicted pedophile in 2002 when she was just 14 years of age. She had previously filed  a Request for Judicial Intervention against Mr. Epstein on July 10, 2019 and had an Order to Show Cause served upon him while he was sitting in jail just last month. Ms. Araoz had made the request in order to compel Mr. Epstein to provide documentation about his employees and logs of visitors as well as his deposition to help determine the identities of the unnamed female defendants in the suit she filed today in New York County under the Child Victims Act. Epstein’s attorneys argued against the order citing his pending criminal charges, but no decision had been made yet by the courts. Given his recent death it is unclear if this Order will proceed. You can review the court filings here.

A local news station in Rochester, WHEC, reports some 230 other lawsuits have been filed under the new law in Upstate New York against a number of Catholic Church institutions. One law firm in particular filed 30 cases as soon as the law took effect against the Diocese of Rochester. You can read more about this story at WHEC Reports

The Archdiocese of New York’s director of communications had stated to ABC News  that they have been “anticipating the filing of law suits since the Child Victim’s Act passed earlier this year.” Cardinal Timothy Dolan released a video statement on Twitter also addressing the matter that can be viewed here: Cardinal Dolan’s Statement

More lawsuits are expected against other public institutions in the coming weeks. Stay tuned to Patriots Soapbox as this is a developing story.