“We must make sure that those judged to pose a grave risk to public safety do not have access to firearms, and that, if they do, those firearms can be taken through rapid due process. That is why I have called for red flag laws, also known as extreme risk protection orders.” (read remarks here)

What are these “red flag laws”, or “extreme risk protection orders”?

Each state needs to enact it’s own law based on the state constitution. Below is a map of the states that currently have or are enacting red flag laws. 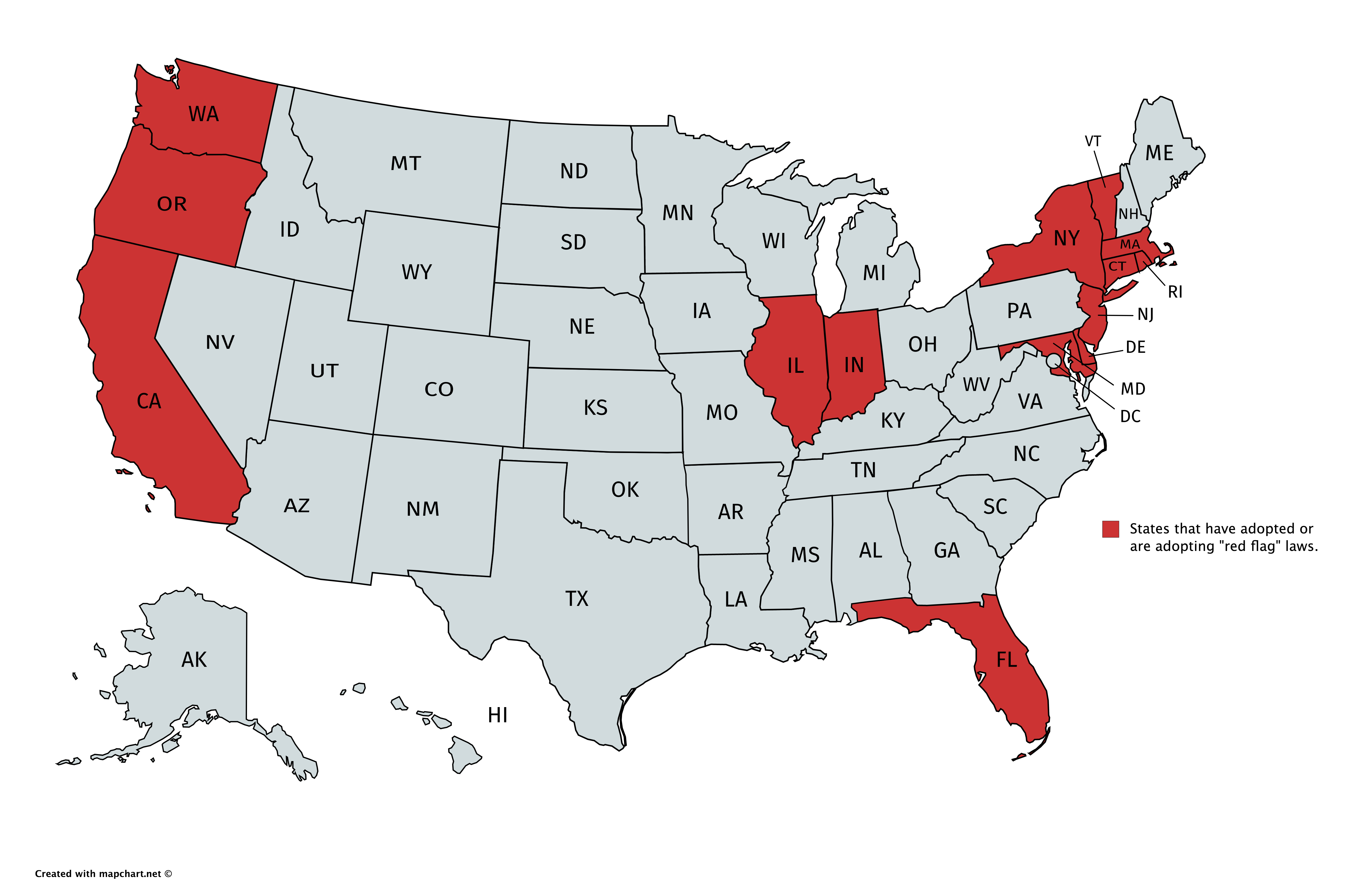 However, the Senate has proposed a bill hoping that the states will adopt it. This bill is “S. 7 — 116th Congress: Extreme Risk Protection Order and Violence Prevention Act of 2019.” (full bill here)

This bill was introduced January 3, 2019 by Senators Marco Rubio, Jack Reed, Angus King, and Susan Collins. The “Red Flag bill” suggest that each state and Indian Tribe enact it.

S-7 states that “such extreme risk protection order legislation is an important tool in the efforts of States and Indian tribes to ensure that firearms and ammunition are kept out of the hands of individuals whom a court has determined to be a significant danger to themselves or others.”

The protection order, not to exceed 12 months, “prohibits the individual named in the order from having under the custody or control of the individual, purchasing, possessing, or receiving any firearms; and requires a firearm be removed.”

So how does this process work before a protection order is given or denied?

A law enforcement officer, family or a household member must submit a petition to the state or tribal court. This petition must describe the facts or circumstances “necessitating that an extreme risk protection order be issued against the respondent  (person they want to issue the order to) because the respondent poses a significant danger of causing personal injury to himself or others by having a firearm or ammunition in their custody or control or purchasing, possessing, or receiving a firearm or ammunition.”

This petition must include a sworn affidavit (statement) by the person submitting it. Any petition must also include the quantities, types and locations of all firearms and ammunition they believe the respondent to have. It is also required that a “good faith notice” to be made in an effort to provide notice to any family or household members or any third-party individuals who may be at risk.

Then the court must hold a hearing within fourteen days after the date of the petition for the order. “If the court finds by clear and convincing evidence that the respondent poses a significant danger of causing personal injury to himself or herself or others by having in his or her custody or control, or by purchasing, possessing, or receiving, a firearm or ammunition, the court shall issue an extreme risk protection order for a period the court determines is appropriate, which may not exceed 12 months.”

In determining if the order is necessary, the Court considers: recent threats or acts made against themselves or others within the last 12 months; “evidence of a serious mental illness” (not defined within context of this bill or referenced elsewhere); any previously issued orders or violations of orders; if the “respondent has been convicted of a crime of domestic violence or other violence“; if they have used or threatened to use any weapons against themselves or others; “corroborated evidence of the abuse of controlled substances or alcohol by the respondent” (not defined within context of this bill or referenced elsewhere); or the recurring use or threat of use of physical force against another person including stalking another person. The Court can also consider if a mental health evaluation or substance abuse evaluation is appropriate.

If the Court does grant an extreme risk protection Order, then it must contain the following items: a statement as to the grounds of why it was issued; the date of the issue; if the mental health or chemical dependency evaluation is ordered; the court name and address; and “a clear statement of instruction on surrendering to the appropriate local law enforcement agency all firearms and ammunition owned by the respondent or in the custody, control, or possession of the respondent and any license to carry a concealed weapon or firearm issued pursuant to the laws of the State or Indian tribe which shall include –  a clear statement that the respondent may not during the period for which the order is in effect have in the control or custody of the respondent a firearm or ammunition; or purchase, possess, or receive, or attempt to do so, a firearm or ammunition.”

If the Court denies the Order, this must be also stated in writing.

What happens if there is an emergency or a time issue? There is a Temporary Ex Parte Extreme Risk Protection Order. Ex Parte is defined as only one party, or meaning in this sense the person bringing the petition before the Court need only be present. In this case, the temporary order can be issued before a full hearing occurs. In order to issue the Temporary Order, there needs to be detailed allegation based on “personal knowledge of the danger in the ‘near future'” (not defined within context of this bill or referenced elsewhere).


To issue the temporary Order, the order needs to conduct the hearing on the date filed taking into account all the same issues as a regular order. There is an appeal process to this. The person receiving the order must request at least one hearing to vacate (withdraw or put aside) the ruling. This hearing must occur no later than thirty days after the date the petitioner is notified of the request. In order for an appeal to be given, “the court shall vacate an extreme risk protection order if the respondent demonstrates by clear and convincing evidence that the respondent does not pose a significant danger of causing personal injury to himself or herself or others by having in their custody or control, or by purchasing, possessing, or receiving, a firearm or ammunition.” The person who requested the order may, however, submit a notice within thirty days to extend the period of the hearing.

If the court does vacate the temporary order, the court must let the police department know and they must “promptly” (not defined within context of this bill or referenced elsewhere) return the surrendered firearms and ammunition.

Any order’s that are granted, the person who requested the order may, however, submit a notice within thirty days to extend the period of the hearing and the court may extend the order for up to another twelve months without a hearing. Once the order is given, the respondent must surrender the items, get a receipt from the court and they must be logged by the Court within 72 hours. If not everything is surrendered, a warrant will be issued.

If you live in any of the states listed as red in the map above, be sure to read your states appropriate law to understand any differences.

To track the status of this bill, click here.