For so many people the name Boy Scouts of America evokes nostalgic memories of camp outs and quests for merit badges, but for thousands of others it is a very different story. Hidden beneath the veneer of a wholesome organization dedicated to instilling the values of the Scouts in young boys, lay a dark and twisted history that exploited those most vulnerable. Instead of teaching young boys about sportsmanship, survival skills and team work, shocking numbers of Scouts were made victims of sexual abuse by the very Scoutmasters entrusted to guide them in learning about ethics and morals. Worse, the organization was very much aware of what was going on and did little about it. The New York Child Victim Act that went into effect on August 14, 2019 has given an opportunity to victims from decades ago to come forward and in so doing are shining a light on the dark history of what was once a treasured American institution.

A number of cases have been filed under the new New York State law and in reviewing quite a few cases a strikingly similar thread flows through each of them.  Sexual abuse of scout members by their leaders has long history indeed. Going back as far as 1935, the Chief Scout Executive acknowledged the problem telling the New York Times that nearly 1,000 men had already been removed from scouting because they “undertake to deal with sex matters and become morbid on the subject and sometimes give way to temptation and develop practices which make them degenerates.”

The scouts kept internal records on these leaders, referring to them as “Perversion” files, but made every effort to keep them secret. They even went so far as to destroy a number of them after 1985. However, there were at least 1,123 “Perversion” files that still existed that were created between 1965 and 1985, many of which can be found here . These files show a disturbing number of Scout Leaders who had not only been accused of sexually abusing children, but were also convicted of it, some  abusing as many as thirty children.

According to the lawsuits, the Boy Scouts refuse to voluntarily release the remaining perversion files even though their own liability expert witness testified in a previous case that files kept between 1944 and 2016 contain an astounding 7,819 names of scout leaders and volunteers who had been accused of sexually abusing children. The expert estimated that if each of them had abused on average five children, which may be a conservative estimate, the number of victims could total close to 40,000. Yet instead of doing anything about it, the Boy Scouts of America chose to conceal the information and continue to promote the organization as a safe environment for young boys.

In Diaz v. Boy Scouts of America and Greater New York Councils, filed in New York County Supreme Court, four victims have come together under the New York State Child Victims Act to pursue justice for the abuse they endured. 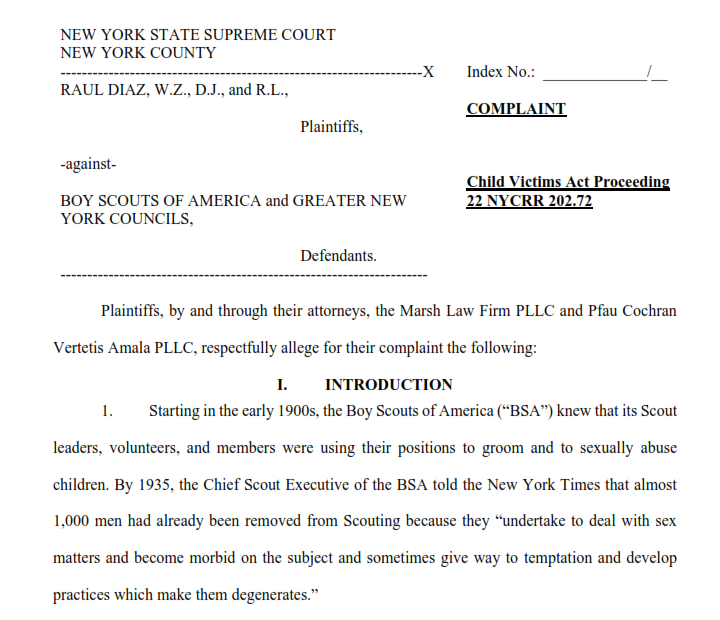 The first Plaintiff, Raul Diaz alleges that he was sexually abused by his Scout Leader John Rosenquist at the Alpine Scout Camp located in Alpine, New Jersey. This particular Scout Leader’s “perversion” file shows that he was indicted in March 1990 for sexually assaulting what may be a different 14-year-old boy in his apartment, when he was supposed to have taken him to a Hockey game in Connecticut.

He was later convicted of attempted sodomy in the third degree. The Boy Scouts sent him a letter suspending his registration with the Scouts, refunding his registration fee of $7 and offering him an opportunity to explain his side of the story to possibly reinstate his registration. They then spoke to the Pastor at Holy Agony Church where Rosenquist’s troop would meet to convince the Troop Committee there to keep the Scout program moving forward. Mr. Rosenquist was sentenced to three years probation by the State of New York. You can review the the Boy Scout “Perversion” file here: John Rosenquist P File

The second Plaintiff in this case referred to as W.Z. alleges his Scout Master John Montgomery sexually abused him as a child. The details in the complaint are scarce but Montgomery’s “Perversion” file is not. 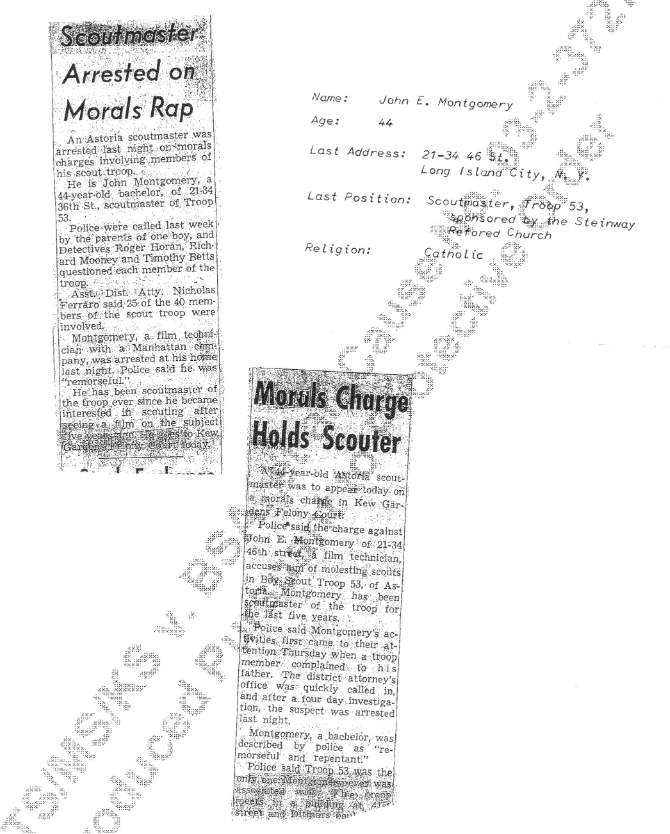 In it are two undated articles from 1963 wherein a boy from his troop 53 in Queens, New York complained to his father about the abuse he had suffered at the hands of Montgomery. The Police were called and spoke with the troop members. The Assistant DA at the time, Nicholas Ferraro was quoted as saying 25 of the 40 troop members were involved. The details of his conviction are unknown. You can view John Montgomery’s “Perversion” file here: John Montgomery P File

The third Plaintiff in this case is referred to as D.J. and alleges that his Scout Master, Fred Modica, sexually abused him when he was a minor. The details of his personal experience are also scant in the complaint, but once more the “Perversion” File is not. In it you will find a letter from Elliot Golden, Chief Assistant District Attorney of Kings County, New York stating that Mr. Modica was indicted on “numerous counts involving sodomy, sexual abuse, sexual misconduct and endangering the welfare of a child.” On September 10, 1973 Modica plead guilty before Justice David Epstein to 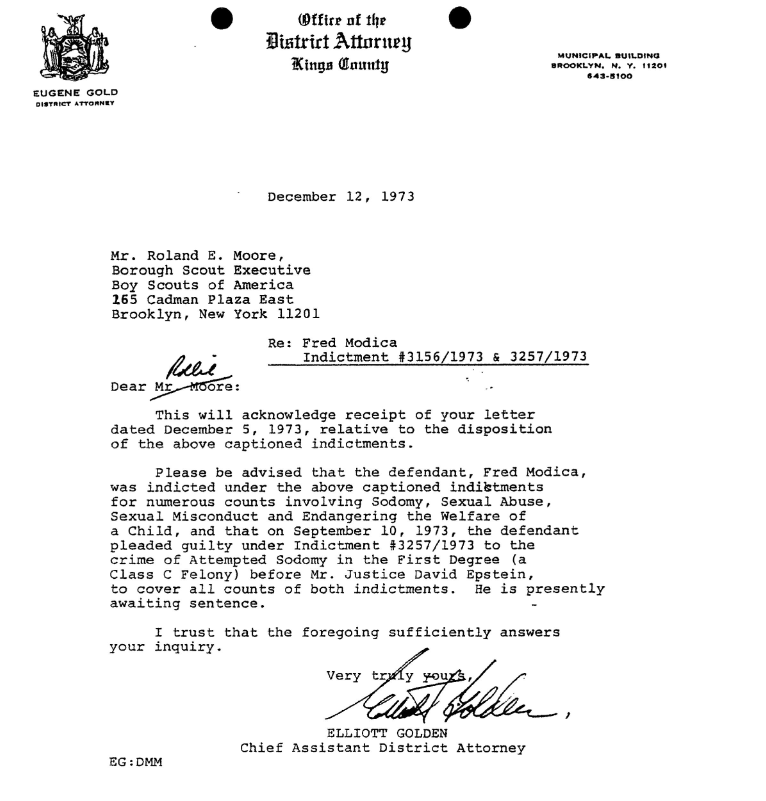 the Class C Felony charge of  Attempted Sodomy in the First Degree, his sentence is unknown. The file also refers to Modica as a “Cub Master” of Cub Scout pack 494  in Brooklyn, New York. Under the recommendations for the confidential filing the Scouts note that they spoke with Reverend Eugene Mcashan of the Peoples Institutional AME Church, possibly the meeting site for the Cub Scouts, who did not wish to discuss the allegations feeling it was unfair to give information before the case was tried. The Reverend did say the information should be given after the trial but no further information was saved to the file. You can review Fred Modica’s “Perversion” file here: Fred Modica P File

The fourth Plaintiff in this case, referred to as R.L., alleges his Scout Master Ernest Morris had sexually abused him. The details again are not spelled out in the complaint. However, Mr. Morris’ perversion file shows that he registered as a Scoutmaster for Troop 605 of New York City in 1964. In July of that same year his file states that he was arrested and charged with Sodomy of a 12-year-old boy. The Scouts decided to permanently remove him from their organization. But in June 1978 and again in June 1979 he actually re-applied to the Scouts. It appears he was denied re-registration. You can review Ernest Morris’ “Perversion” file here: Ernest Morris P file

The accounts above are from just one case filed in the last thirty days. Another case details the sordid history of Scout Master Jerrold Schwartz of Troop 666 in Manhattan. In M.G. v Boy Scouts of America et al, the Plaintiff alleges in excruciating detail how Schwartz groomed him for sexual abuse beginning in 1988. He lavished special attention and praise upon the boy, offered him gifts, trips and drove him home after meetings. Once in his grasp, Schwartz began sexually abusing M.G. for nearly four years on an estimated 100 different occasions. 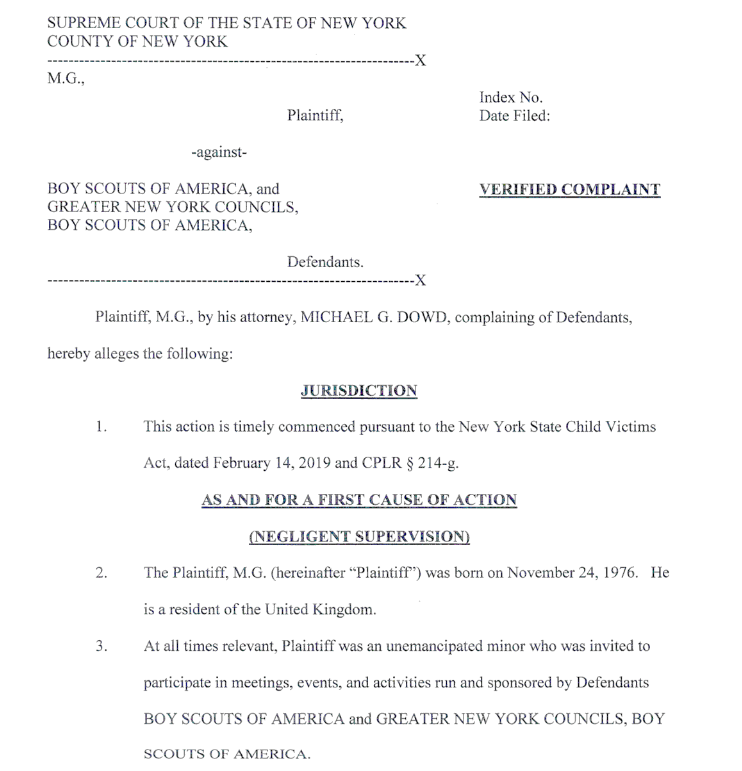 Not surprisingly, Mr. Schwartz’s “Perversion” file is among those not publicly released.  There is, however, a long trail of newspaper articles and court records going back as far as 1978. According to a letter to Justice Solomon in 2001, the Assistant District Attorney of New York County in 2001, Evan Krutoy, explains an incident occurring in 1978 wherein an 8-year-old boy who was camping awoke to find Schwartz fondling him. The child’s mother alerted the Scouts to the incident but they did nothing. In 1993, the victim contacted the Scouts again about Mr. Schwartz and after their discussion, Schwartz was suspended from his position but that was short lived. All it took was a letter from Schwartz to the Scouts demanding his reinstatement and stating the victim was an unstable person who was never a member of the Scouts. 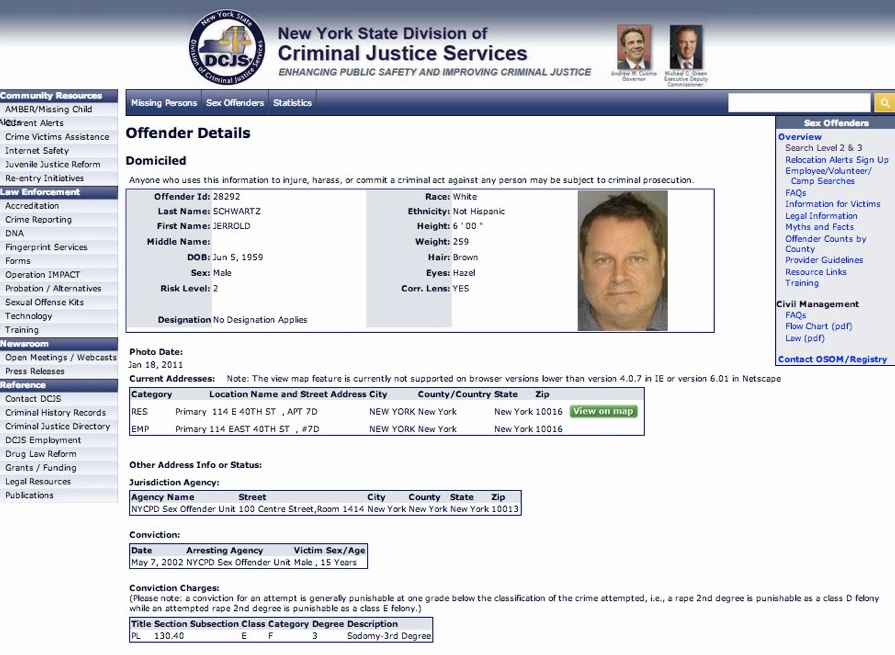 Another letter written to Justice Solomon was from the mother of one of the victims. In heartbreaking detail she describes how her learning-disabled son was enrolled in the Scouts to gain self esteem, only to be preyed upon by Schwartz. He was methodical in how he groomed not only the boys, but the boys’ families as well. He would befriend them and then abuse the child right under the noses of the parents. In addition to being a scout master, Schwartz also operated a business named “Adventure Trails” which he could use to further his perverse appetite by taking scouts to remote ski resorts in Colorado and allow the boys to stay at his “home office” there. He also took inner city kids, according to the letter of a friend of his, on ski trips and trips to Disneyland. The Awareness Project has laid out a detailed report of their own describing the vile history of Mr. Schwartz which can be viewed here.

Unfortunately, this is only a glimpse of the horrors many young boys, some as young as eight years old, had endured while members of the “iconic” Boy Scouts of America. With a new influx of lawsuits and allegations under New York’s new law being leveled against the Boy Scouts, it is likely they will be sued out of existence. Perhaps, given the atrocious history of the organization, it will be a very fitting end to a disgraced American institution.