Border Patrol agents rescued six Haitian nationals, including two children under the age of 1, after the group attempted to wade across the Rio Grande River near the Del Rio Port of Entry. Border Patrol agents performing maritime operations observed a group of people struggling to cross the river, due to the depth of the water along with the swift current. Marine agents maneuvered a patrol vessel to the group and assisted the individuals safely aboard. Agents then shuttled them to the U.S. riverbank where assisting agents were waiting.

Agents rescued a total of six Haitian nationals, including two children. All six were offered medical assistance, however, no injuries were reported. The group was transported to the Del Rio Station and processed per CBP guidelines.” read here

“LAREDO, Texas –U.S. Customs and Border Protection (CBP) officers continue to remain vigilant and were successful in intercepting dangerous narcotics this week with a combined estimated street value of more than $850,000 in two enforcement actions.

‘The CBP officers’ experience played a significant role in these interceptions,’ said Port Director Albert Flores, Laredo Port of Entry. ‘Our CBP officers’ hard work, perseverance and utilization of our canines and non-intrusive imaging systems resulted in the interception of these hard narcotics.'” read here

While conducting a routine immigration inspection, Border Patrol Agents stopped a gray Saturn Vue for further investigation. Agents interviewed the driver, a United States citizen. After the driver consented to a vehicle search, a U.S. Border Patrol canine performed a non-intrusive inspection of the vehicle and alerted, indicating the possible presence of narcotics. A secondary search using X-Ray technology found anomalies in the rear quarter panels of the vehicle.” read here

“WASHINGTON —For the first time, U.S. Customs and Border Protection, Air and Marine Operations (AMO) conducted a maritime enforcement training for Trinidad and Tobago Customs and Excise (TTCE) officers. A decade has passed since TTCE officers have received any formal marine training from the United States.

The two nations determined that a joint interagency training was necessary to enhance the capability to interdict, stop, and arrest those that are smuggling a wide variety of illegal importations into Trinidad.” read here

“PHARR, Texas—U.S. Customs and Border Protection, Office of Field Operations (OFO) at the Pharr International Bridge cargo facility discovered $1,800,000 worth of methamphetamine in a commercial truck arriving from Mexico.

‘Our officers’ outstanding ability to work as a team along with great utilization of all available tools and resources resulted in the detection of these hard narcotics which won’t make their final destination within the U.S.,’ said Port Director Carlos Rodriguez, Hidalgo/ Pharr/Anzalduas Port of Entry.” read here

“EL PASO, Texas – On Monday afternoon, members of the Army National Guard assigned to assist the U.S. Border Patrol with border security were monitoring cameras, when they observed a group of six individuals illegally crossing into the United States just south of Ascarate Park, in southeastern El Paso.

Four individuals climbed over the old wire-mesh fence and entered the American canal. Two human smugglers, who assisted but did not attempt to cross, returned to Mexico. Agents responding to the scene immediately entered the canal and deployed rescue ropes in an attempt to assist a man, woman, and child already in the water.” read here

“YUMA, Ariz. – U.S. Border Patrol agents worked with the Government of Mexico to identify and extradite a wanted murder suspect who fled to Mexico to evade arrest in the United States last week.

At approximately 7 a.m. Sunday, the Yuma Sector Foreign Operations Branch received information regarding an individual encountered in Mexico by Sonoran State Police, PESP, who claimed to be a United States citizen. Record checks verified that the individual was a United States citizen, and wanted by the Pinal County Sheriff’s Office in connection with a homicide in Casa Grande October 10, 2019.

The FOB coordinated with Tucson Sector Border Patrol assets to transfer custody of the wanted subject from the Government of Mexico to the Pinal County Sheriff’s Office the following day. The 20-year-old man was booked on attempted murder and murder charges.” read here

After a Border Patrol canine alerted to the vehicle, Tucson Sector agents referred the semi tractor-trailer for secondary inspection, where they discovered 32 Mexican and Ecuadorian nationals, all illegally present in the country, hidden in the produce cargo.

The trailer’s interior was 47 degrees, potentially endangering the illegal immigrants locked inside.

“WEST PALM BEACH, Fla. – U.S. Customs and Border Protection (CBP), Air and Marine Operations (AMO) teamed up with the U.S. Coast Guard and a network of local law enforcement and community partners in South Florida to make a dream come true for a 5-year-old boy battling an aggressive form of brain cancer. 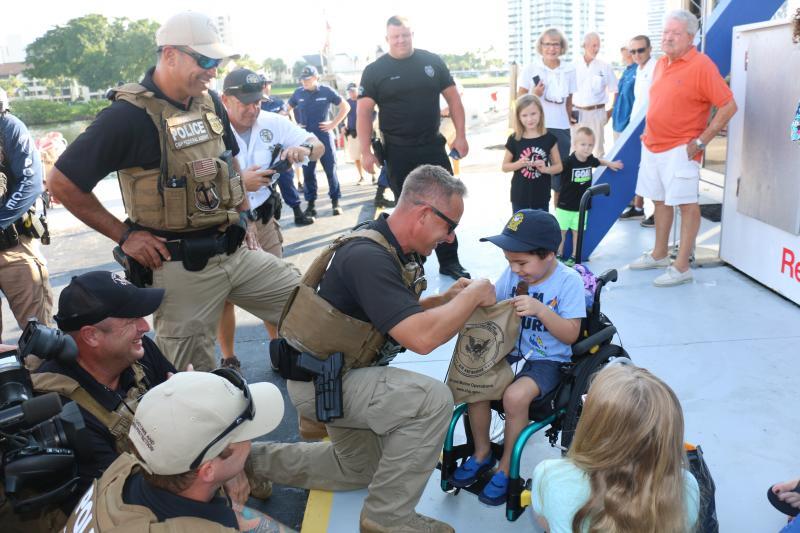 Giovanni wanted to spend a day on the water with the highly-trained professionals protecting our coastal borders. Air and Marine Operations West Palm Beach Marine Unit joined the U.S. Coast Guard and teams of local law enforcement personnel from across Palm Beach County to make the wish become a reality on Oct. 9.” read here

‘Smugglers continue in their attempts to evade law enforcement officials,’ said Del Rio Sector Chief Patrol Agent Raul L. Ortiz. ‘They have no regard for the safety of those being smuggled, law enforcement, or the traveling public.’

Agents assigned to the Eagle Pass Station attempted to perform a vehicle stop on a 2002 Dodge Ram on Farm to Market Road 1908 near Brackettville. The driver of the pickup truck failed to yield to agents and fled, turning north on to Farm to Market Road 131. The driver then pulled over to the side of the road, where six individuals jumped out and absconded into the brush. The driver then continued on FM 131 until agents were able to successfully disable the vehicle, using a controlled tire deflation device. Agents arrested the driver, a 25-year-old male from Del Valle, and passenger, a 27-year-old female from Austin, both U.S. citizens. Agents then apprehended six illegal aliens, where they had fled the vehicle. The six aliens are from Honduras and El Salvador, including one juvenile, age 14.” read here

‘Seizures of hard narcotics have increased dramatically this year, despite the deep concealment methods used by criminal networks to smuggle them,’ said Del Rio Sector Chief Patrol Agent Raul L. Ortiz. ‘These type of drugs are among the most dangerous the nation has ever faced, but thanks to the tireless efforts of our agents and K-9 teams, a significant amount of them will not reach our communities.’” read here

‘Border Patrol agents in Maine are assigned to patrol our area of responsibility,’ said Jason Owens, Chief Patrol Agent of the Border Patrol in Maine. ‘As public servants, there is an expectation that our agents will look to help people in need and sometimes that leads to an enforcement action.’

“FORT LAUDERDALE, Fla. – U.S. Customs and Protection (CBP) officers working at Port Everglades seized approximately 46.5 pounds of cocaine concealed within boxes of oranges arriving from the Dominican Republic over the weekend. The estimated street value of the drugs is hundreds of thousands of dollars.

“HIDALGO, Texas—U.S. Customs and Border Protection, Office of Field Operations (OFO) at the Hidalgo International Bridge arrested two Mexican citizens from Reynosa and a female United States citizen after discovering a combined $5,835,000 worth of methamphetamine and cocaine in separate, unrelated incidents.

CBP OFFICERS SEIZE MORE THAN $1M WORTH OF DRUGS

Officers at the Port of Naco referred a 37-year-old Naco, Arizona, man for additional inspection of his Volvo sedan, as he attempted to enter the U.S. through the port early Tuesday morning. The search of the vehicle led to the discovery of nearly 70 packages of drugs, which were determined to be nearly 77 pounds of marijuana, worth in excess of $23,000.” read here

“WILMINGTON, Delaware – U.S. Customs and Border Protection (CBP) discovered a handgun and nearly 1,500 rounds of ammunition October 4 at the Port of Wilmington that was concealed inside household goods destined to Honduras.

CBP SEIZES 117 POUNDS OF COCAINE INSIDE FLOWER BOXES IN AGUADILLA

‘We regularly inspect flowers for dangerous pests.  This time we found narcotics,’ stated Roberto Vaquero, Assistant Director of Field Operations for Border Security in Puerto Rico and he US Virgin Islands. ‘We will remain steadfast in our commitment to secure our homeland and to help protect the health and well-being of the American public.'” read here