President Trump also remarked that he wants to get a “cash payment” to people without insurance and is working on it with Congress to make that happen.

The president then invited SBA Administrator Carranza to amplify the development of the PPP to respond to the impact of the shutdown on small businesses. “Our most important objective is to keep employees on board and allow them keep their businesses viable. This relief will help stabilize the small business sector. It will keep workers employed along with keeping up with operating expenses.” Administrator Carranza also reminded all small business owners that “they should apply for forgivable loans to keep employees on the payroll during emergency.”

Secretary Mnuchin began by praising the work the SBA and the Treasury Department have done on the creation of the PPP, saying that they “have been working around the clock for small businesses.” On the topic of the Coronavirus relief check, the Secretary advised that “the first round of $1,200 Coronavirus relief checks will be deposited within two weeks and Social Security recipients won’t need to file a new tax return.” For Americans, who are “underbanked,” Mnuchin added that “there are other methods to get direct payments like prepaid debit cards and the Treasury is working on that for those without accounts.”

Shifting the briefing to the Wuhan virus, POTUS was joined by Vice President Mike Pence, Senior Adviser to the President Jared Kushner,  Director of Trade and Manufacturing Policy Peter Navarro, the Coronavirus Task Force chair Dr. Deborah Birx and Rear Armorial John Polowczyk of the Joint Chiefs staff who has assumed the role of Supply Chain Stabilizer during this period of time.

President Trump announced new guidelines for nursing homes, urging facilities to use same staff for same patient groups, and to create areas for infected patients separate from those for well patients.

POTUS then transitioned to the Defense Production Act which he invoked today for the 3M Company to produce more masks. Additionally, Trump noted that “General Motors will soon be starting production of ventilators.”

On the topic of Personal Protective Equipment (PPE), POTUS reiterated the quantities already shipped: “4 million N95 respirators, 1.8 million surgical masks, 1.4 million gloves, 460,000 face shields, 460,000 face shields and 4,000 ventilators just to New York City.” Advising that it is the responsibility of each individual state to maintain a stockpile of medical stock for mass emergencies, POTUS said that “states should have been building up their stockpiles of medical supplies and that the federal government stockpile is a backup.”

President Trump circled back around to the topic of the general public wearing masks going forward, remarking “If people wanted to wear them, they can, but in many cases, the scarf is better.”  He added, “New regulations on masks will be coming out.” Trump added that people can also wear scarves, “We’ll see what that recommendation is.”

Trump went on to praised the Army Corps of Engineers and how they completed its conversion of the Jacob K. Javits Convention Center in New York City into an alternate care facility for more than 2,000 non-COVID-19 patients along with Coronavirus ward tents in Central Park and a makeshift hospital that has been set up in a Manhattan convention center.

On another topic, President Trump had strong words for a report that is circling in the Capitol that Rep. Adam Schiff (D-CA) wants to convene a commission to investigate President Trump’s handling of this pandemic. POTUS fired back: “Conducting partisan investigations in the middle of a pandemic is a waste of time. That will only build up my poll numbers. This is not the time for politics. Endless, partisan investigations, here we go again.”  He also added, “The people doing these witch hunts have been losing and losing by a lot!” 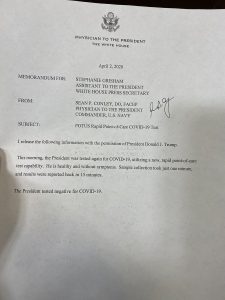 Before President Trump away for a brief meeting, he announced that he had taken a second test for the virus, largely out of curiosity to see how quickly and effectively it works, and it was much more pleasant than the last one. Flashing the official memo with the results, he announced he was negative for the virus.

Vice President Pence updated the data on COVID-19 tests, now totalling 1.3 million. Pence also announceed that “President Trump will make an announcement tomorrow about a plan to pay for uninsured Americans to get Coronavirus treatment, by using some of the $100 billion allotted to hospitals in the Phase 3 bill.”

For the first time during these press briefings, Senior Adviser Jared Kushner made an appearance. He opened by saying “the President wanted him to break down every barrier to help the efforts to succeed with government doing things it does not always do.” Kushner added, “Earlier today, the President called the New York City Mayor to say a one-month supply of N95 masks will be sent for the New York City Public Hospitals.”

Peter Navarro, updated developments under the Defense Production Act (DPA). According to Navarro, “ventilator companies have asked for the use of DPA powers to get parts and the supplies they need more quickly.” Tomorrow, POTUS will sign another DPA order to address what Navarro called “a black market” for medical supplies and will allow Customs and Border Patrol Agents to crack down on shipments of personal protective equipment leaving the country. “This administration will be cracking down unmercifully on those engaged in hoarding and/or price gouging on needed medical supplies,” added Navarro.

He also has a message for sellers. “If you’ve got inventory, call FEMA and sell them at a fair price.” Another question that has a lot of Americans puzzled is why the United States depends on other countries for medicines, Peter Navarro spoke on that as well. “One of the things this crisis has taught us is that we are over-dependent on a global supply chain. If we learn anything from this crisis, it should be never again, never again should we rely on other countries for our medicines and countermeasures.” He also added, “After the emergency, the VA, DOD & HHS will buy American for essential medicines. At the same time, we will deregulate, so we can get the FDA and EPA to facilitate domestic manufacturing.”

Rear Admiral Polowczyk spoke at today’s briefing as well. He mentioned that there have been 7640 ventilators “pushed out” to the hot spot states within the United States. There are also pallets being loaded with 200,000 N95 surgical face masks for New York City hospitals to be delivered tomorrow. The Rear Admiral added, “New York City has been assured it will be receiving a month’s supply of face masks.”

Coronavirus Task Force chair Dr. Birx also made some remarks for the media. On the topic of masks: “We don’t want people to get an artificial sense of protection when wearing a mask.” She added, “The debate is continuing about the masks, because physical distancing is most important.”  Dr. Birx is cautioning that people wearing a mask might create false sense of security that it will protect them from the Coronavirus.

Dr. Birx explained, “Masks are not a cure-all. Just remember it’s not a substitute for the existing social distancing guidelines. … We want to be clear. When we say gatherings of no more than 10, we aren’t expecting people to be having dinner parties, cocktail parties.”

The president returned to the briefing room and following all remarks, a question/answer period proceeded. You can find the full press conference on the following video.

President @realDonaldTrump and his task force are working with the best scientists, doctors, and researchers to defeat this virus. pic.twitter.com/0bQuao0KOc

.@SBAJovita: "The President has put the Nation's 30 million small businesses front and center in the response effort." pic.twitter.com/O0T2yqmsMI

.@USTreasury and @SBAgov are working around the clock to deliver a program that bolsters small businesses in this critical time. pic.twitter.com/ozHDrS4HG1

Great article. I love the work our POTUS is doing combating the Wuhan virus in the USA. Adam Shiff and Nancy Pelosi are up to their old tricks manufacturing a new narrative to launch another witch hunt investigation. They are going down in November.