These are not political game balls to be volleyed about for cheap political points. These are America’s children stolen from our future because of our society’s acute sickness. The instrument is not the perpetrator. The person who uses the instrument is completely responsible. The Commandment clearly states “ Thou shalt not murder”. That is addressed to personal responsibility, as are all the Commandments dictated to Moses directly from God.

Why has our society relinquished personal responsibility in spite of our laws that require it? We are seeing it time and time again. Just look at New Your City and LA. The prosecutors and judges in those cities continually aid and abet guilty criminals by not detaining them out of society and defiantly ignoring their jobs to protect the societies they are responsible to do. Even their police forces are frustrated as they repeatedly arrest these criminals that are dumped back on the street to steal and murder.

Our society’s younger generation(s) have always been affected by ‘pop culture’ and the many branches of the entertainment industry. Now add to that “influencer” models to social media being today’s car window that everyone can “moon” the world from. But worse is how over these last two years our children have been and are being abused on many levels. Locked out of schools. Upon returning to classrooms they are masked and cloistered apart from each other, and even punished out into the cold for lack of mask wearing. And now we learn once back in the classroom they are not being taught the much needed basic skills of read, writing, math and science, and most of all intelligent logic and reasoning. No, they are now submerged under racist and gender “theories” against the parents’ will. The coveting of our children for their own agendas’ nefarious purposes. And that coveting turns to ‘stealing’ when they use the children’s and parents’ unimaginable horror as political weapons. As well, increased child mental health issues, while noted in “reports” with increases in recent years are ‘reported’ what is being done?? Well, more and more kids have joined adults on toxic antidepressents…

Bob Hoge: Could SSRI Antidepressants Be One of the Causes Behind These Mass Shootings?

Oh, add to the confusion and angst by preaching/teaching racism (and telling students they are racists because of their skin color or congenital victims of racism) and preaching/teaching kids they are not the gender the obstetrician announced them to be in the delivery room. Today’s school children are being indoctrinated— nay, brainwashed and it is poisoning their ability to make sense of anything. And the adults who are political agenda-driven to use and abuse them are ignoring the mental illness they are fomenting…

Naomi Lim: Biden says Second Amendment ‘not absolute’ at police executive order signing … And repeats more of the bullshit that was debunked last time he babbled this crap. Not to be outdone… 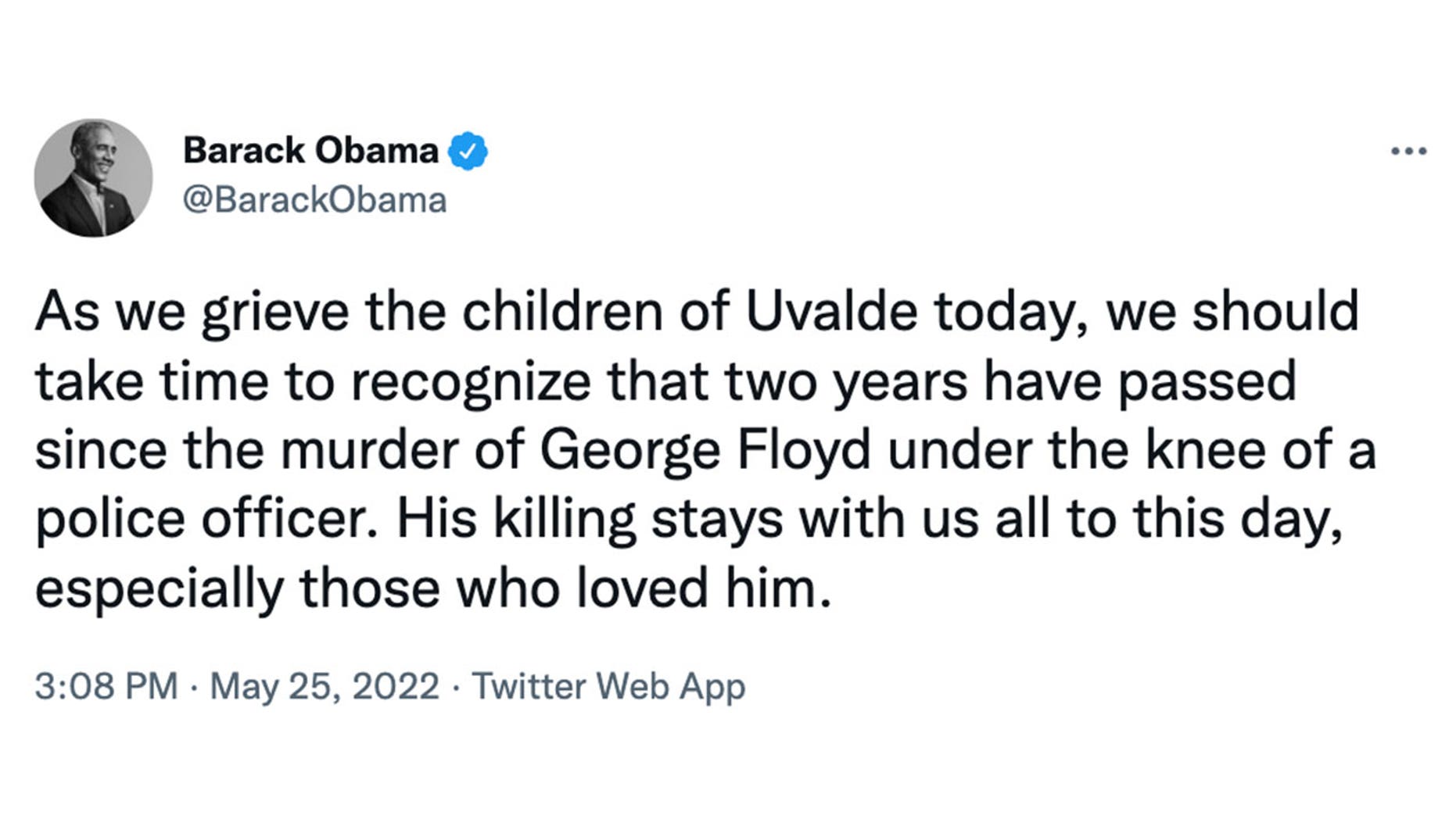 Joseph A. Wulfsohn: ‘ONE OF THE WORST TWEETS’ – Obama clobbered for linking Uvalde massacre to two-year mark of George Floyd’s murder

Heather Hamilton: ‘One of the worst tweets in history’: Obama compares George Floyd to Uvalde shooting … For the record, George Floyd was a career violent criminal, and on the event of his death was resisting arrest while hopped-up on enough drugs to kill a couple of horses. The teachers and children killed in Robb Elementary school the other day were not on drugs, not resisting arrest, did not have violent crime records, were innocently participating in school work in order to become good citizens in society. One of the teachers killed was the wife of one of the local policemen. Atleast one child killed was the child of one of the local policemen. Other than my angry-typed missive, there is absolutely NO comparison(s) to be made.

Beto appears to wait until the governor’s remarks are complete before he stands in front of the stage to interrupt Lt. Governor Dan Patrick’s presentation. Patrick attempts to shut down the Democratic Party candidate for Governor, saying, “Excuse me, you’re out of line and an embarrassment.”

O’Rourke continued to talk over the Lt. Governor to address Governor Abbott. “You’re doing nothing,” the failed presidential and senatorial candidate said.

Uvalde Mayor Don McLaughlin was most vocal in trying to shout down the interruption. Texas Senator Ted Cruz can also be heard trying to hush Beto.

“I can’t believe… you’re a sick son of a bitch,” the mayor continued, “that would come to an event like this to make political issues.”…

Parents of the Robb Elementary school children were in the public news conference. The failed political hack was caught in this obscene political campaign stunt… 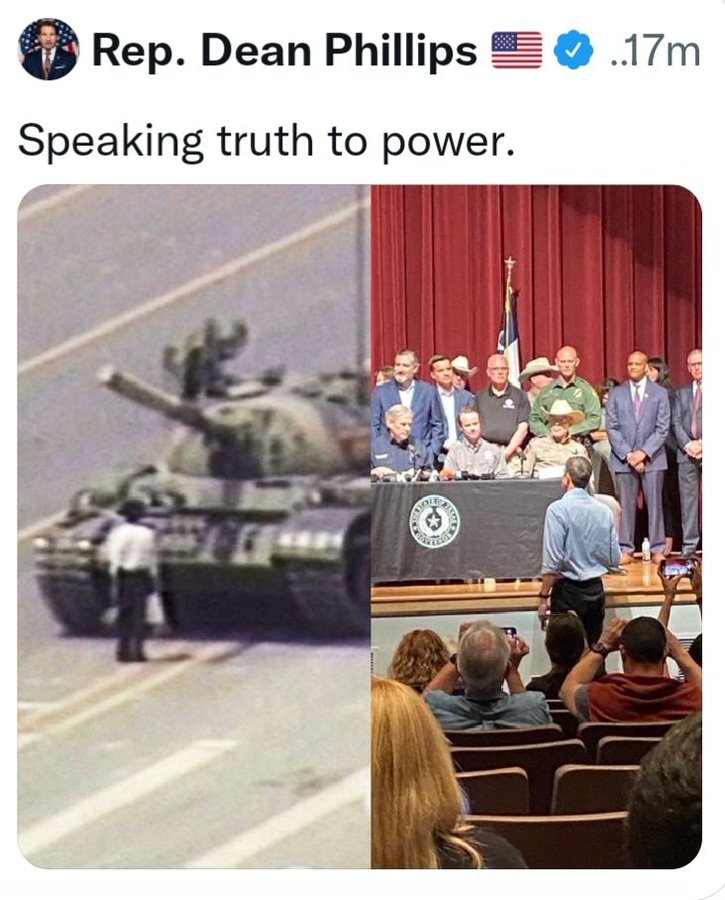 Yeahyeahyeahyeah sure, because that is what’s going on:

Yet, another rare “white Hispanic”, according to the left…

Spotsylvania School Board member makes a statement on shooting in Texas.

“Most American’s hearts are pained today because of the continued terrorist murders of people and children of color at the hands of white nationalists.” pic.twitter.com/DbknhZcSeP 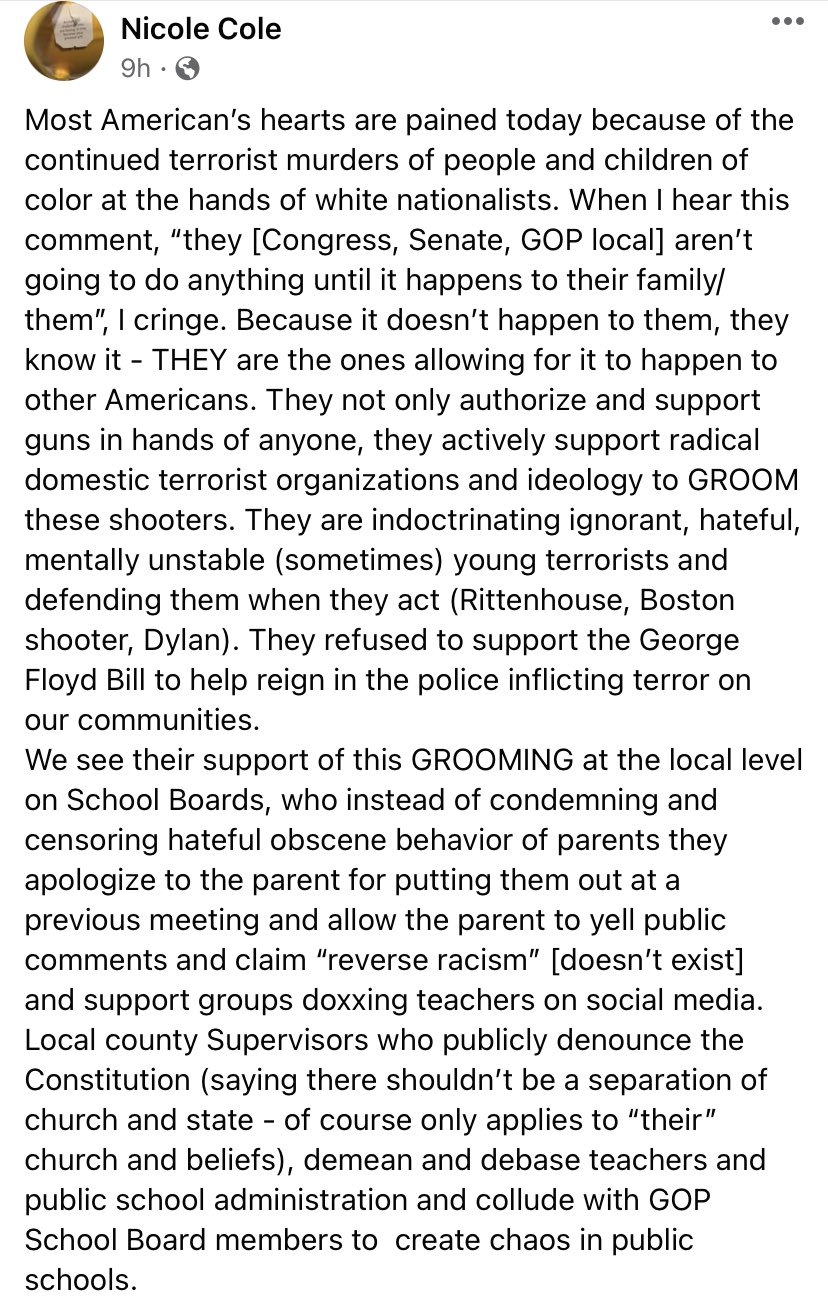 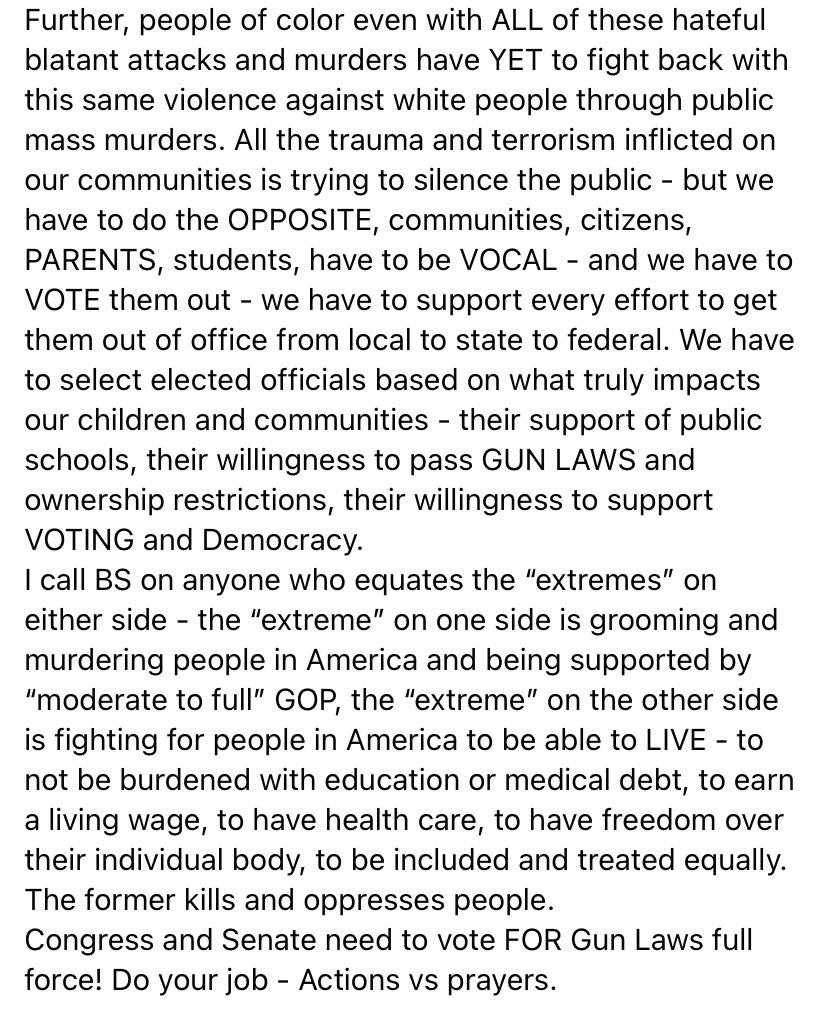 Twitchy: Dem strategist says that Republicans ‘want to force you to have kids so they have something to shoot at’

Twitchy: WaPo senior editor reminds us that the AR-15 was ‘invented for Nazi infantrymen’ in the late 1950s

You didn’t even Wikipedia that one I guess. This is a senior editor for the Washington Post https://t.co/Mjesz9EeRR pic.twitter.com/naTE5ApkGK 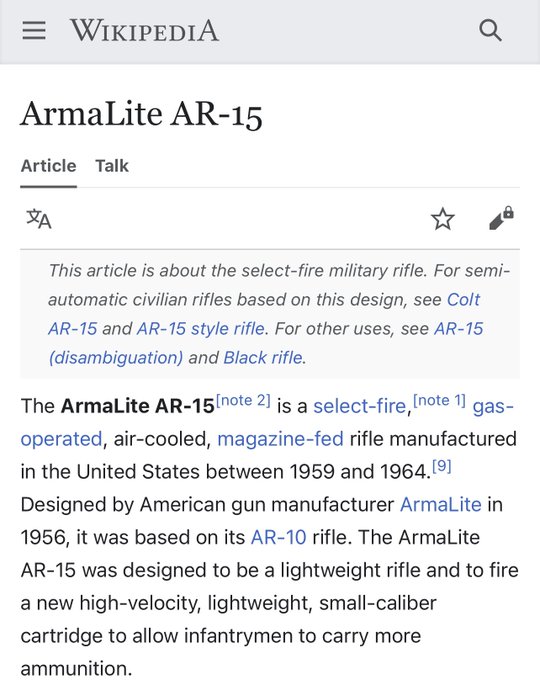 I guess when the shooter isn’t a white supremacist they just tell you the gun is. 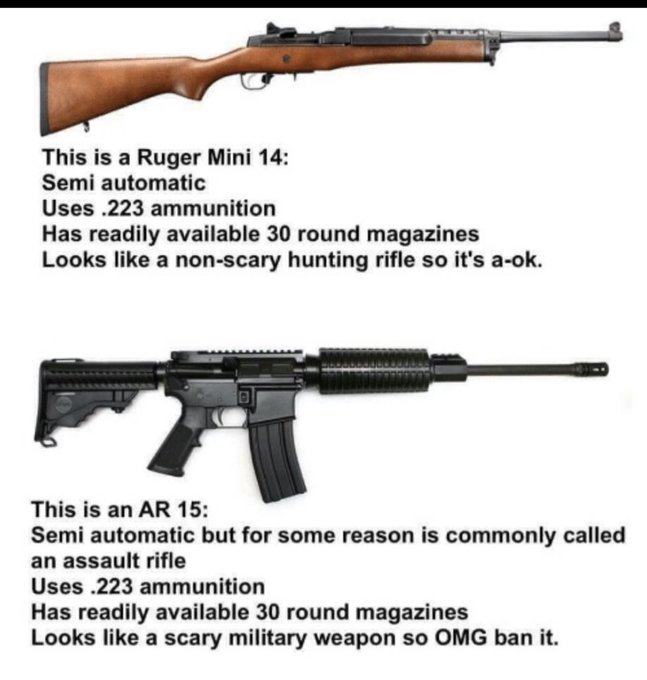 Note to the left. If/when crimes are committed with guns the vast majority of the criminals are not “right-wingers” (See: Chicago and NYC and LA). The fact is, politics are so far last on their radar so as to not even be a blip.

… over the course of the past 20-odd years of my life, which coincides with my political consciousness-raising (to coin a phrase from the 60s), I’ve come to the conclusion that perhaps the prime descriptors of the Left are projection and hypocrisy. But in the wake of the past few days, I might have to add another. Operationally, I see the Left in the manner of a psychotic driven by Munchausen’s by Proxy syndrome but with a slight twist. They don’t feign their own illness to draw sympathy; they themselves are the vectors of disease, illness, dysfunction and misery while pretending to be saviors and healers. They save nothing, they heal nothing. They cast blame on straw men as well as those who attempt to expose them with blood libels and damnations, all the while creating more misery, poverty, dissolution and death even as they attain greater and greater political power at the expense of the perpetually bamboozled masses who reflexively vote straight ticket Democrat every two years. Lather, rinse repeat.

Bearing that in mind, when you examine everything the Left has done both in and out of government since the late 1950s if not before, you understand full well how what happened in Uvalde came about. You also understand how black on black violence racks up a body count that averages out to a Uvalde every single weekend in just Chicago and Baltimore alone. Add on top of it the millions of black babies killed in the womb. Add on top of that every black youth who wound up in prison for years or in the city morgue, if not from gunshot wounds then from a drug overdose.

Of course, the problem isn’t the societal dissolution caused by Democrat imposed poverty and dependency reinforced by black self-inflicted cultural norms that eschew morality, education and a desire for self-improvement as “acting white.” Worse, the white leftist poison of a rigged system designed to keep black people down. How could it be?!…

NEW: This is the hat the elite, veteran BORTAC Border Patrol agent was wearing when he breached the classroom with a tactical team and engaged/killed the Uvalde school shooter, a CBP source tells me. Graze wound to head. Many BP agents in Uvalde have kids at the school. @FoxNews pic.twitter.com/924WCOZjsK 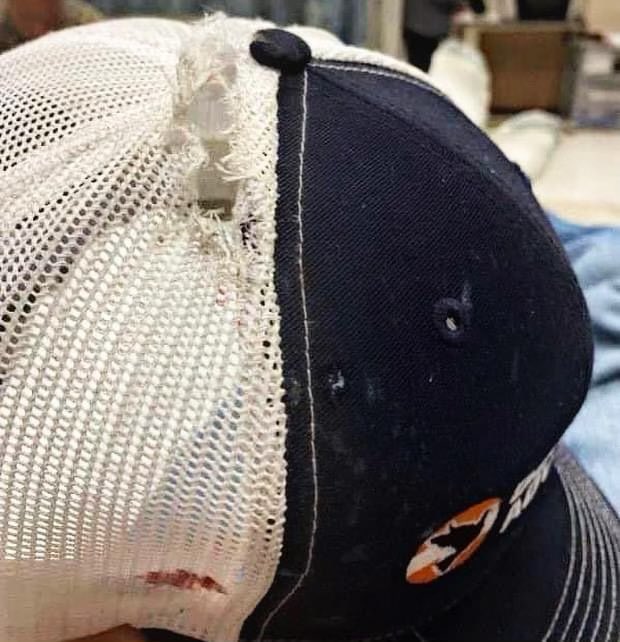 Greg Norman: Texas school shooting: Salvador Ramos told classroom ‘it’s time to die,’ survivor says … Blood chilling. Imagine, if you dare, what these surviving little children have to live with for the rest of their lives.

Why do your kids go to school in gun-free zones, but Congress goes to work with armed guards?

Why are school zones gun free zones? Because of Joe Biden. The Gun-Free School Zones Act was a section of the of the bill Crime Control Act of 1990, a bill that Joe Biden, himself, introduced. https://t.co/acA7uA2uD4

J. Christian Adams: Flashback 30 Years: Guns Were in Schools… and Nothing Happened

Steve Deace (2/15/2018): We have a right to bear arms. But after the Florida shooting, it’s time for conversation: There are two Americas. But we’re not stuck because we’re arguing too much. It’s because we’re really not arguing at all.

took about two minutes to repeat an unverified rumor on-air that it was “some sort of border patrol chase” https://t.co/NNFNl7nMzM pic.twitter.com/tKVAlL3gBv

The reason you edited it down to six seconds is because you cut out the part where I shot down these rumors entirely you absolute hack. https://t.co/NsMaGv1Wbu