They want to force us to believe it’s the right that are the fascists and want to destroy “democracy”, and kill everyone that doesn’t agree with them? 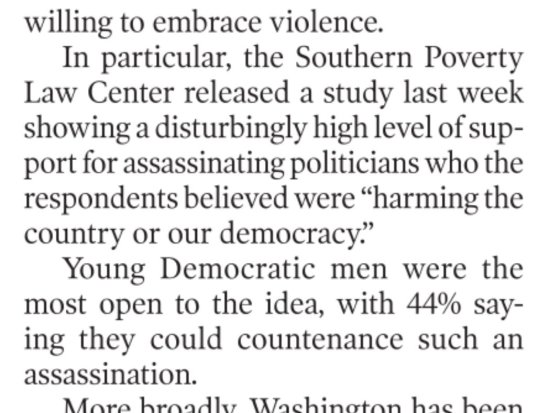 You get the feeling that gun control is to protect themselves. If these 44% of Democratic men really believe this, then they know they need to disarm us to subjugate us.

The same people who told Pew Research they support internment camps for the unvaccinated.

The same people who want you to give up your right to defend yourself. https://t.co/crruUhDWaK

Here are the SPLC poll results, with a stupefying spin. https://t.co/jO6g76N0n7

Wow. If it had been Republicans, this would be front page news everywhere. But because it exposes violent tendencies of Dems this is the first time I’m seeing it.

Here are the actual SPLC results, buried way, way down. SPLC doesn’t even analyze that 44%. It just shows the poll data. “Younger” refers to under age 50, so it’s two generations. https://t.co/jO6g76N0n7 pic.twitter.com/hNfCyYtx0C 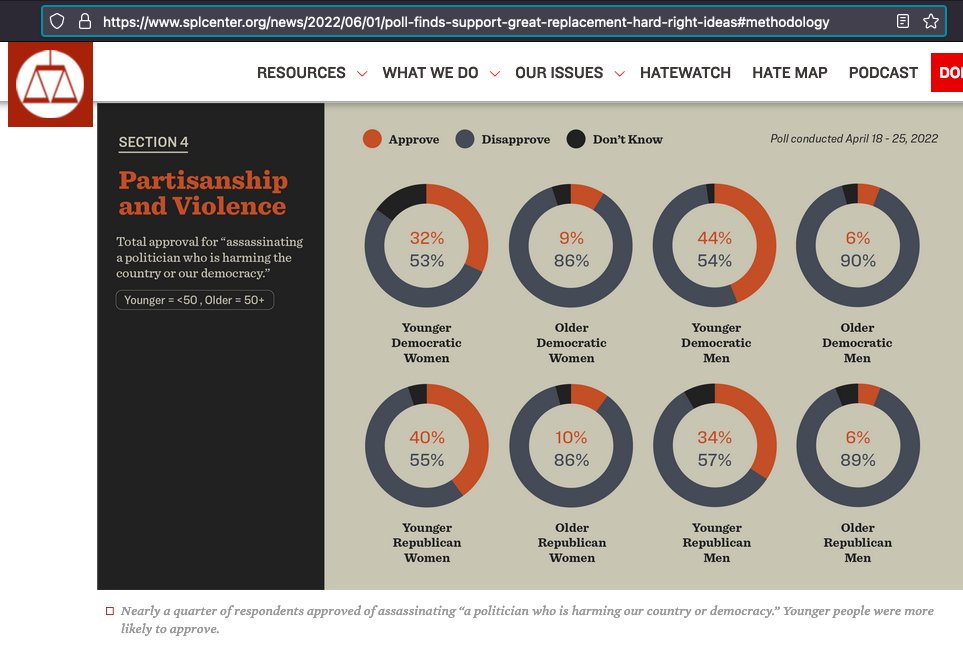 And SPLC is one of those hate groups and undoubtedly support it themselves.

It sure seems that way – SPLC buried the data at the end of a long analytical piece on the polling results, and softened the conclusions about it to boot. SPLC’s big concern about the poll was the number of people who subscribe to the Great Replacement “conspiracy theory.”

And here is one person that is making sure this happens…

It’s no secret billionaire George Soros has been tossing millions of dollars into district attorneys’ races around the nation, with the intent to slide some of his socialist ideas into local communities — specifically, to reform the justice system so that criminals run free and victims, well, victims are then victimized again and again.

But what is new is that Democrats are starting to feel the effects of this far-left “Let the Looters Be Looters and Loot” type of justice system.

Kylee Zemple: Democrats Yell ‘Do Something!’ On Guns While Their Prosecutors And Policies Create Our Culture Of Crime: Just as the humanitarian crisis at the border is the predictable result of the left’s open-borders policies, so our crime wave is a consequence of their anti-punitive philosophy of criminal justice.

Since a spate of recent shootings, Democrats led by President Joe Biden have been busy exploiting the tragedies to call for more gun control, go after the “gun lobby” bogeyman, and yell that we must “do something!” about firearm-related crime. They’ve been clear that they aren’t interested in talking about effective solutions that don’t involve gun-grabbing, so they probably also don’t want to talk about who’s responsible for America’s unsettling crime wave: the left.

While a prosecutor recall might seem disconnected from an uptick in mass shootings and subsequent gun-control chatter, the two are intertwined. Just as the humanitarian crisis at the border is the predictable result of the left’s open-borders policies, our crime wave is the inevitable result of their anti-punitive philosophy of criminal justice. And the biggest culprits are progressive prosecutors like Boudin who champion Democrats’ policies and have been installed across the country after being bankrolled by left-wing radicals like George Soros and other groups.

According to a new report out from the Law Enforcement Legal Defense Fund (LELDF), Soros alone has poured a staggering $40 million into prosecutor races to help elect 75 leftists that have contributed to the crime wave, and he’s just one of many billionaires working to destroy law and order, influence elections, control the media, and otherwise destroy the country.

The left and its skeptics continue to use guns as a scapegoat and say there’s no direct correlation between left-wing prosecutorial philosophies and crime, but the evidence suggests otherwise. According to the LELDF report, more than 40 percent of the roughly 22,500 homicides in 2021 — so more than 9,000 — happened in these 75 district attorneys’ jurisdictions, which accounted for more than one-third of last year’s violent crimes and property crime…

The dilapidating state of our culture, institutions, and politics (the order is deliberate) has been decades in the making.  Blame Boomers — the culture definers among them — for getting the ball rolling downhill in the highly romanticized lied about 1960s.  They spawned the decadent counterculture, which set in motion every society-rotting development we’re grappling with today.  Bill and Hillary Clinton are the aging avatars of counterculture radicals who turned into establishment exploiters.

Real Clear Politics’ average for “Direction of Country” polls is currently an eye-popping wrong track, 70.7%, while right direction stands at a paltry 22.4%.  Other than D.C. lifers, welfare moochers, and people wanting their college debt loans erased, who are these 22%?  And who, this side of lobotomies, is the smaller percentage of “not sure?”…

So, you say the people of the United States must be completely disarmed via abolition of the Second Amendment and total gun banning? When I was a young adult in the 1980s I was watching the news with my Hungarian Grandmother. I don’t recall the actual news story but it obviously involved a crime with someone shooting and killing. My Grandmother shook her head and bemoaned how Americans could have guns. That in Hungary and other European countries ‘the people’ were not allowed to have guns except hunters who had to have permission from the government. That’s how it should be in America, she insisted. I assured her that the killer in the news story probably didn’t legally own the gun he’d used illegally to break several laws and that no amount of more laws would’ve stopped him and other countless people who refuse to follow the laws.

I then explained to her how in our Founding Fathers’ wisdom they wrote the Second Amendment so we can not just hunt but protect ourselves and our homes … and our country. I then told her the European gun restrictions enabled Hitler and the Nazis to easily do what they did as they invaded city after city.

Lloyd Billingsley: Active Shooters in France Kill 648 Men, Women and Children: What happens when the people with all the power have all the guns.

On June 10, 1944, four days after D-Day, troops of the 4th SS Panzer Regiment surrounded the French village of Oradour-sur-Glane, in central France. The troops surrounded the village, ordered the people to assemble in the village square, and shot those who tried to flee.

The National Socialist forces put women and children on one side, men on the other. The men were confined in six locations, faced down by heavy machine guns. The SS troops set off an explosion then gunned down the men, aiming for the legs before finishing them off at point blank range and setting the dead and dying on fire.

The SS troops locked the women and children in the village church, filled with black smoke from an exploding gas cannister. The Germans threw in grenades, shot indiscriminately, and set the victims on fire. The rest of the village was then looted and set ablaze.

The attackers killed 245 women and 207 children, including six below the age of six months. The 196 men killed included seven Jewish refugees from other parts of France. Out of the 648 people murdered in the village, only 50 could be identified…

Jonathan Turley: So You Say You Want a Revolution? President Biden Continues to Talk Revolution if the Court does not Rule as Demanded

“So you say you want a revolution.” When they sang those lines, the Beatles could well have been talking about Democratic leaders today. Revolution seems much in the minds and the rhetoric of politicians who are continuing to threaten swift responses to the Court if it rules against their wishes. The latest armchair revolutionary is President Joe Biden himself who went on Jimmy Kimmel to do the first sit down interview in months. To his credit, Biden was promising only a “mini-Revolution.”

Others have gone full revolutionary. Sen. Jeanne Shaheen, D-N.H., joined the growing ranks of members of Congress in issuing a warning to the Supreme Court: reaffirm Roe v. Wade or else. The “else” varies from promises to pack the Court to personal accountability for justices. For Shaheen, it is a promise of “revolution.”

Clearly, these leaders are using over-heated rhetoric and do not support violence. They no more want true revolution than Sen. Chuck Schumer was calling for the killing of Justices Brett Kavanaugh and Neil Gorsuch when he declared on the steps of Supreme Court “I want to tell you, Gorsuch, I want to tell you, Kavanaugh, you have released the whirlwind and you will pay the price. You won’t know what hit you if you go forward with these awful decisions.”

Calling for revolutionary change in politics is as common as calling on people to “fight” political opponents or legislative actions. For example, with rioting continuing in Brooklyn Center, Minn. and around the country, Rep. Maxine Waters, D-CA, went to Minnesota and told the protesters that they “gotta stay on the street” and “get more confrontational.”

However, these same politicians have insisted that such references are literal when made by their opponents. Notably, Democrats are holding hearings this week on how Republicans bear responsibility for the Jan. 6th riot due to their calls to “fight” against certification of the 2020 election… 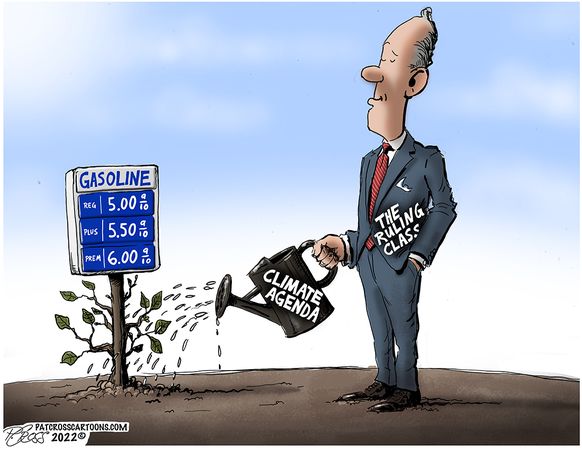 George Neumayr: Liberalism’s Phony Solution to Gun Violence: It pushes for more laws while destroying the civil society that makes citizens virtuous enough to follow them.

Jonathan Turley: Biden: “I Don’t Want to Emulate Trump’s Abuse of the Constitution” Despite Losing a Series of Court Fights

More about the Wuhan Lab and Pfizer cover-ups: “The problem with ‘follow the science’ is that ‘the science follows the money’”…

~~ Many thanks to Maggie and The Universal Spectator for reprint permission.