March 26, 2020 — No sooner had the massive cleanup wound down in Nashville, the nation was again called to a volunteer effort to curb the spread of Coronavirus throughout the country. Typically, the American people rallied again to work tirelessly on our behalf.

This report begins on March 3. As residents of Nashville slept, tornado sirens started wailing at 2:00 a.m. in advance of tornadoes heading toward downtown Nashville and eastward. At last count, the tornadoes in the area are responsible for 25 deaths and hundreds hospitalized. Many people are still missing.

Although the extensive damage made most roadways impassable, it did not stop volunteers from neighboring states from traveling to the devastated areas of Tennessee. Organizations like Samaritan’s Purse are among many who joined the clean-up in the Nashville areas hit by tornadoes.

Our hearts break for those in TN who’ve been devastated by tornadoes. @SamaritansPurse staff & volunteers are on-site & we have deployed 3 disaster relief units to Nashville, Mt. Juliet & Cookeville. We also have @BGEA Rapid Response chaplains there ministering. pic.twitter.com/YO5mjMCNRR

These kinds of organizations are well known and greatly appreciated for all they provide during a disaster situation.

However, the wider story is one of selfless volunteers who come to a battered area like Nashville, solely out of a deep commitment to “help their fellow man.” I stumbled onto an individual that did just that. Days after the tornadoes struck the Nashville area and the EMS teams had finished their job, I was told the story of a humble man.

Information from three people with the knowledge of the situation, an older gentleman (a former truck driver) and two researchers told me of an individual heading to Nashville. The three helped “John,” an anonymous name by his request, prepare for his travel plans to Nashville from Indiana. Two lady researchers of his chat group searched for lodging close to Nashville for “John” to stay and the gentleman gave him tips of what he may need to prepare for his journey and the best travel route to take.

After hearing of the cooperation of the three advising John, I was keen to talk to him, but he was already on the road to Nashville and checking in with his three friends. I would have to wait for his return to have a conversation with him.

Shortly after John returned and rested, he came back online. I had the opportunity to interview him and just talk about the humanitarian action taken by him and other volunteers.

When asked what prompted his call to action in Nashville, he told me,

After work, I was looking at my twitter account and saw a tweet posted by Scott Presler (@ScottPresler) that he was organizing another clean-up project. When I saw Scott’s tweet I felt the need to join in his latest project.


John told me that at first he was undecided about going because he had to go to work. He then went to an online community where he goes to talk and relax. He mentioned the idea to his group, describing Presler’s call to action. He told them he wasn’t sure he could go yet, and would have to request time off from his boss. John told me that the chat group was enthusiastic about his plans and started giving him advice for his trip.

After the advice, I got from my friends, I decided to make my plans. I talked to my boss to ask if I could get a few days off to go to Nashville to help with the clean-up. He thought it was a good cause and I could take off.

During our chat, John told me that he was motivated by all the advice he received. Then he called to confirm his lodging, he packed his car with the essentials for overnights in Nashville as well as roadside supplies he might need on the road.

I asked him how the drive was. He replied,

When I was driving the memories of the Baltimore clean-up came to mind with all the volunteers from several areas.

I interrupted him to ask about Baltimore.

It was another clean-up project I went to. It was an earlier project that Scott Presler had organized. This trip felt different to me though, the Baltimore trip was a rubbish clean-up task that may have had needles and other things to clean-up, this trip had a different feel, peoples lives, personal property, and their memories were at stake in this case. 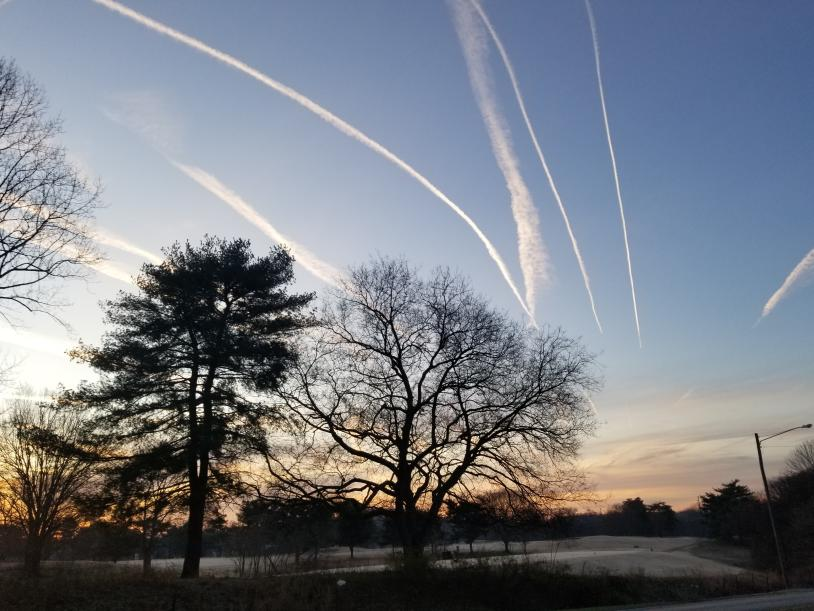 Recounting his trip, John told me that the closer he got to Nashville the more he imagined how the damage would be and the feelings he felt as he passed small towns and cities. Also the beauty of landscapes untouched along the roadway.

The closer he got to Nashville, the landscape changed. No longer the beauty from miles behind, debris from the storms were widespread. Other places were scenes of victims in disbelief of their losses. 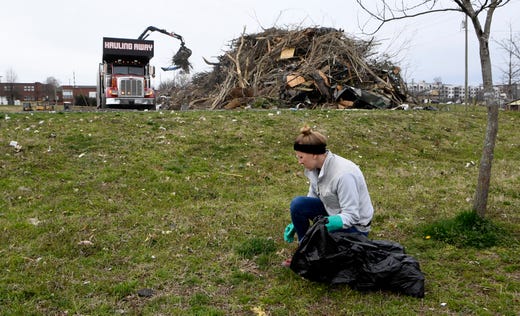 Miles further, as he drove, the damage became more apparent, yet the symbol of America’s deep compassion for our fellow man was in abundance. 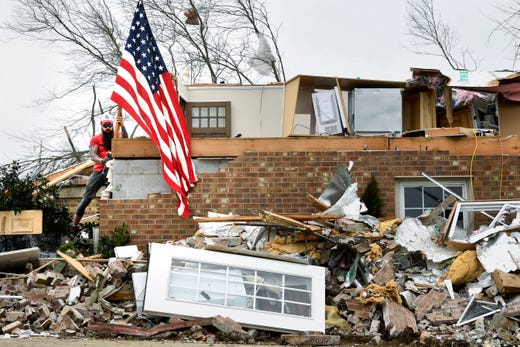 When John arrived in the area, he checked into his hotel to rest and to confirm where volunteers were to meet up. It must have been hard for him to sleep after seeing the damage along the road and in the local neighborhoods.

The next morning, after a short rest, John went into the harder hit areas that need the help he was there to do. As he got closer, he saw a school where other volunteers were parking. This is where he found a group from Samaritan’s Purse, one of the first organizations on the scene. According to John, this was the gathering place to be assigned to a workgroup.

Samaritan’s Purse parsed the volunteers into groups. Some of the volunteers had proper tools to start on their assigned areas according to their skill and equipment.

As with any larger organization, proper waivers, and orange tee-shirts with their emblem were used to identify the crew members to protect from liabilities while the crews were working.

John originally was going to meet up with Scott Presler’s clean-up group, organized for Sunday. However he had an extra day before that and found Samaritan’s Purse a good place to start.

John’s short video below was shot after meeting up with the Presler crew and on the way to the area he and his crew were assigned.

The above video shows a damaged area leading to an already cleared area of debris, illustrating that when people get together on a common goal, amazing things occur. This was only the beginning of things that John was there to do. John’s crew was to go into the assigned neighborhoods and started clearing debris, stacking it on the side of the roads for trucks to pick up. For legal purposes, Samaritan’s Purse had a work order for a specific area to perform any clean-up.

“While working there was a lady and three children pulling a wagon handing out sandwiches and water to the crews,” John told me. What an amazing thing, another citizen going out of their way to contribute to a common goal.

After a short time, now we are faced with a new disaster, the COVID-19 (Coronavirus) pandemic.

At the beginning of the outbreak, as in many emergencies panic strikes first. This episode is no different. Thousands of people stormed their local supermarkets for essentials and foodstuffs. In some cases some people were more ambitious than others, taking more items than they may need, not leaving much for others to pick through.

After a week or two more of the camaraderie of our citizens, people started to realize that this pandemic was so large that everyone needed to come together and weather this storm.

Then, from government and health agencies reports, the extent of this pandemic became clear. The Coronavirus Task Force has posted prevention cautions to assure the country of the various means to avoid exposure to the coronavirus and the plans to contain and eliminate the outbreak.

As the pandemic spread worldwide, many people died. Many Americans have been affected by the virus. Protective clothing for the first responders and hospital staff dwindled as the numbers increased.

President Donald Trump has made the call among all cabinet members to put shoulders to the wheel and contribute however they can to solve the shortages. The private sector has stepped up and pledged to assist in the procurement of specialized testing kits, protective gear, and other equipment needed to contain further infections.

As this pandemic continues, government and private entities have come together with a common goal to contain the virus and assure that health care is available. In the meantime, the virus is running its course and many Americans have been quarantined or self-quarantined to slow the spread of it.

As these things were being enacted, contributed and made available, humanity has come forward again. People helping people no matter any type of biases.

It is a sad state of affairs when it takes disasters to bring out what we as a culture truly are. A loving, caring people that leave any differences of opinion behind the common needs of our fellow friends and neighbors.

~~ The coronavirus is still in the wild, but as humanity comes together this too will be a roadmap for the future. During this pandemic, we will stay the course to eliminate this scourge.

Great article. There was a great ‘coming together’ after the ’89 Earthquake in the Bay Area. My home was 3 miles from the epicenter in Loma Prieta and was never habitable again. At first we lived in tents in the driveway and ate MRE’s brought to Redwood Estates Community Center with the laundry and shower big rigs everyone used. Looking… Read more »