TEL AVIV, ISRAEL – May 17, 2020 – It is being reported that Du Wei, the Chinese Ambassador to Israel, has been found dead at his home in Tel Aviv.

This comes just two days after Mike Pompeo visited Israel to warn about Chinese investments and tech transfer and the danger it poses to National Security.

A #forensic team was filmed collecting evidence and carrying out investigations outside the house of #Chinese #Ambassador to #Israel Du Wei who was found dead by an embassy worker earlier on Sunday.#Israel pic.twitter.com/czYxonVHNZ

This video captured by Ruptly outside of the home shows police and investigators taking items out of the home in what appears to be evidence collection.

This news alert from India Today about the incident, claims that Du Wei died under suspicious circumstances, and that investigators are looking into whether foul play was involved.

Initial reports say that Ambassador Du Wei was found dead in his bed by staff at his residence, and that no signs of violence were found on his body https://t.co/ggzeybIJFw

Haaretz reported that there were no signs of violence at the scene, and that it appeared he had passed away from health problems, some kind of “cardiac” incident.

According to Jason Lemon, of Newsweek in an article entitled “Du Wei, Chinese Ambassador to Israel Found Dead at His Home, Said China was Make Scapegoat for Pandemic“ apparently Mr. Wei claimed China was being victimized by the West:

China’s Ambassador to Israel Du Wei was found dead at his residence in the coastal town of Herzliya and police have launched an investigation.

Israel’s Foreign Ministry announced Du’s death on Sunday and said that police were on the scene, the Times of Israel reported. Dai Yuming, China’s deputy chief of mission in Israel, also confirmed the news in an official press briefing. Newsweek has reached out to the Chinese embassy in Washington, D.C. for further comment

Du, 58, who had previously worked as a diplomat for China in Ukraine, arrived in Israel in mid-February to take on the role of ambassador. Due to restrictions put in place to curb the spread of the novel coronavirus, he had been required to quarantine for two weeks upon arrival.

Previously, Du had publicly argued that China was being scapegoated for its response to the virus.

‘In the beginning, some voices were condescending and schadenfreude. Later, when the disease broke out around the world, the voices became ‘China should apologize.’ It is scapegoating. In history, it has happened many times when the causes of diseases were wrongfully blamed on a specific group of people, which is despicable and should be condemned. The disease is the enemy of all mankind, and the world must fight it together,’ he said in an April interview with the Hebrew-language newspaper Israel Hayom. – Jason Lemon, Newsweek

Clearly the ambassador may have had his own reasons for making those claims. China had been under heavy criticism around the world for its handling of the COVD-19 virus. We have been able to confirm that Chinese officials did engage in a cover-up during the initial phase of the outbreak. We know that whistleblowers were punished and some “disappeared.”

The BBC has reported that Mr. Wei may have been concerned he had the virus or that he may have come into contact with someone who did. They report in an article entitled “Du Wei: Chinese Ambassador to Israel Found Dead at Home“ that he went into self imposed isolation when he arrived in Israel in February of this year:

When he arrived in Israel on 15 February, Mr Du had immediately to self-isolate for two weeks because of coronavirus restrictions.

In an interview with Israeli newspaper Makor Rishon last month, Mr Du said China was being made the world’s scapegoat.

‘In history, more than once, a certain group of people was accused of spreading pandemics,’ he said.

‘That is despicable and should be condemned. The disease is an enemy of the entire humankind and the world should fight it together.’

On Friday, his embassy made a scathing attack on US Secretary of State Mike Pompeo who had criticised China’s handling of the coronavirus pandemic on a visit to Israel.

In a response published in the Jerusalem Post, the embassy condemned Mr Pompeo’s “absurd comments”, denying that China had ever covered up the crisis. – The BBC

If he did go into self-imposed isolation, that suggests he could have had Coronavirus. If he did pass away of a “cardiac incident” in his sleep, it may have been as a result of that.

News of Du Wei’s death is also being reported by Israel Hayom, in an article entitled “Chinese Ambassador to Israel Found Dead at Herzliya Home“ that provides more detail:

The Israel Police have launched an investigation into his death. Magen David Adom emergency services said the cause of death appears to be a cardiac episode, as the envoy was found dead in his bed by the staff at his residence. No signs of foul play were found at the scene, a source close to the investigation said.

The 58-year-old envoy arrived in Israel in February. He had served as the Chinese ambassador to Ukraine prior to receiving his appointment to Israel.

Foreign Ministry Director Yuval Rotem spoke with China’s Deputy Ambassador Dai Yuming and expressed Israel’s condolences. He reassured Dai that Jerusalem will help the Chinese Embassy with anything they may need at this difficult time.

Wei is survived by his wife and a son. The two were not with him in Israel.

On Friday, the Chinese Embassy in Israel responded to criticism voiced by US Secretary of State Mike Pompeo during his visit to Israel last week, calling his remarks that China had concealed information about the coronavirus outbreak from the world ‘absurd.’

The spokesperson for the Chinese Embassy to Israel, Wang Yongjun, penned an article in The Jerusalem Post over the weekend saying ‘China-Israel cooperation is win-win in nature.’

In response to Pompeo’s criticism Yongjun worte, ‘China has never covered up the outbreak. COVID-19 is a brand new virus that has never been seen in human history.’

Addressing recent reports that the US was encouraging Israel to sever economic ties with the Chinese government, Yongjun said, ‘We trust that [our] Jewish friends are not only able to defeat the coronavirus but also the ‘political virus,’ and choose the course of action that best serves their interests.’ – Israel Hayom

This is a reference to the claim made by Wei and other Chinese officials, that they were being blamed. They were trying to compare this to the holocaust, to obtain sympathy from the Jewish people. One of Israel’s most prominent writers, diplomatic correspondent Lahav Harkov, called this out as a shameless effort to re-direct blame, by pressing emotional buttons. She reminded the people of Israel that their ancestors were not causing whistleblower doctors to disappear, nor did they oppress minorities.

Du Wei served as China's ambassador to Ukraine before moving to Israel in February this year https://t.co/karfyffebI

He also was an Ambassador for China to the Ukraine, before taking the job at Ambassador to Israel in February of this year.

We are continuing to investigate this case. We will report more information as it surfaces, including any toxicology report and COVD-19 testing.

This Reuters article from August, 2019 suggests he did not want anyone looking into Ukraine and China debt-trap diplomacy. Did he know something about Ukraine corruption and the 2016 election?

As you can see, from the Wikipedia page about the Chinese embassy in Kyiv, Du Wei ran it from 2016, during the 2016 US Presidential election up until 2019.

If Biden was unmasking Flynn, and people like Alexandra Chalupa were working with Ukraine to target the Trump campaign and Manafort, did Wei know anything about this? Did he assist?

He is his own Wikipedia page, showing his time in Ukraine, before moving to Israel.

We also know back in October 2019, President Trump called on China to look into Joe and Hunter Biden’s illicit China dealings. Why did China move Du Wei to Israel? Why pull him from the Ukraine mission? 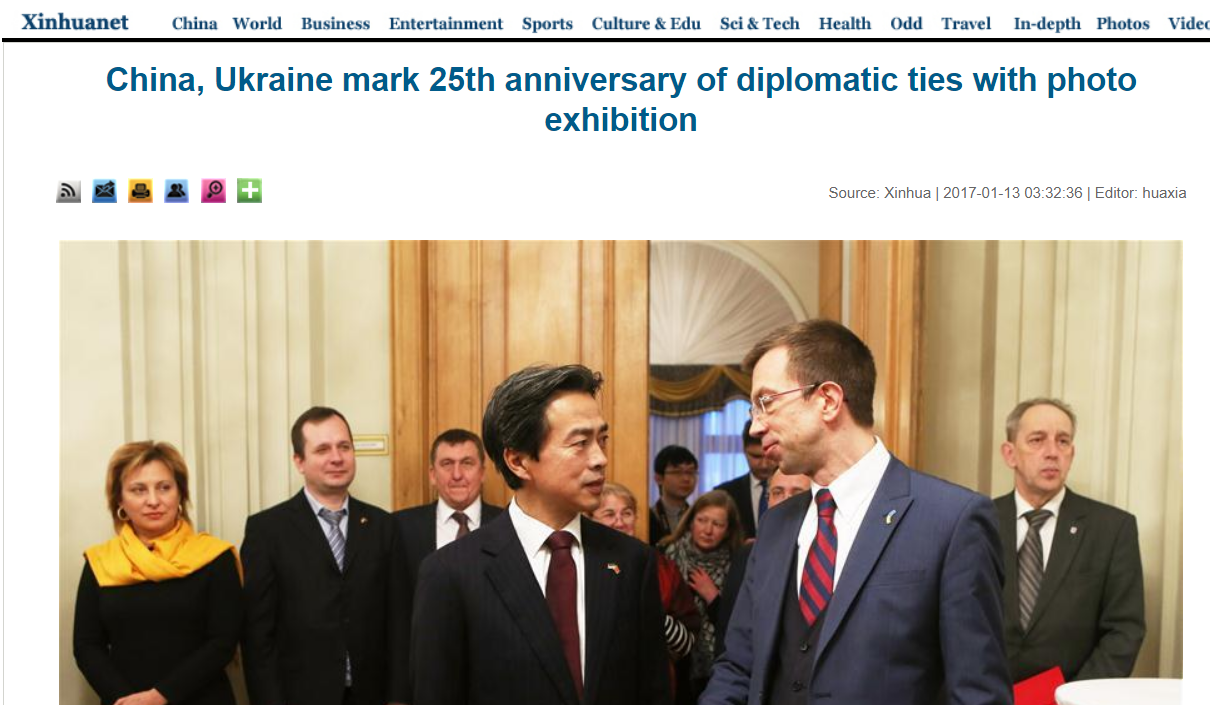 In 2017, he celebrated the 25th anniversary of China-Ukraine diplomatic relations. 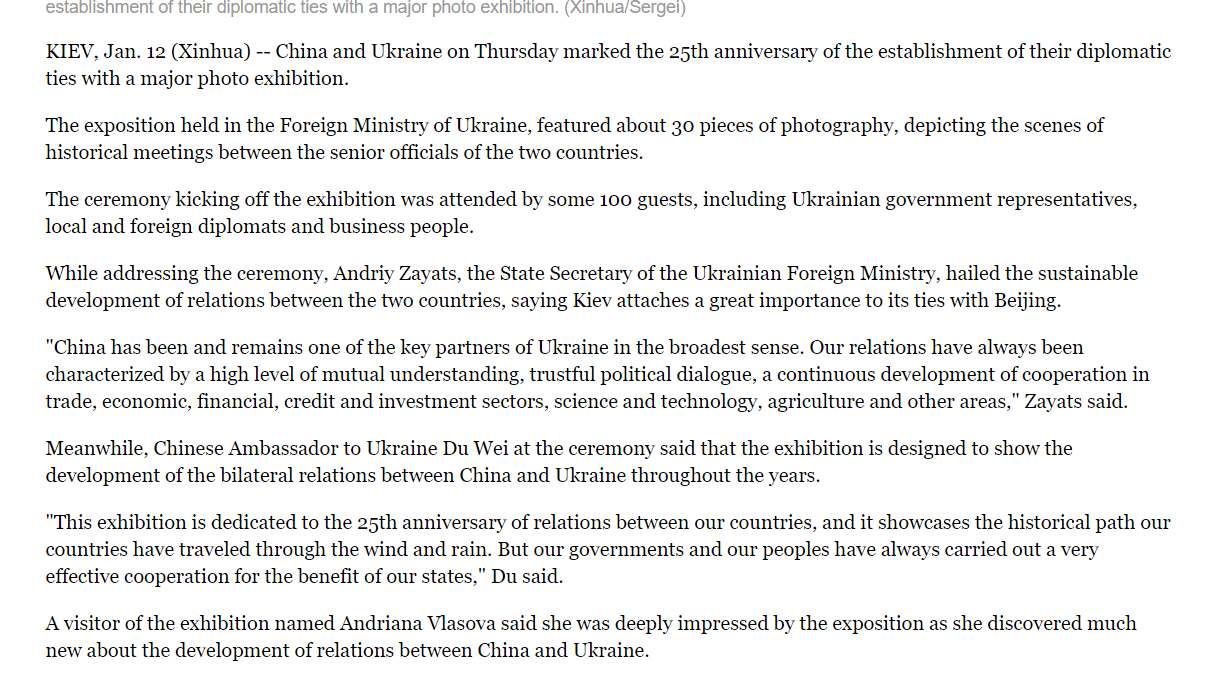 In 2018, he called for stronger ties between Ukraine and China: 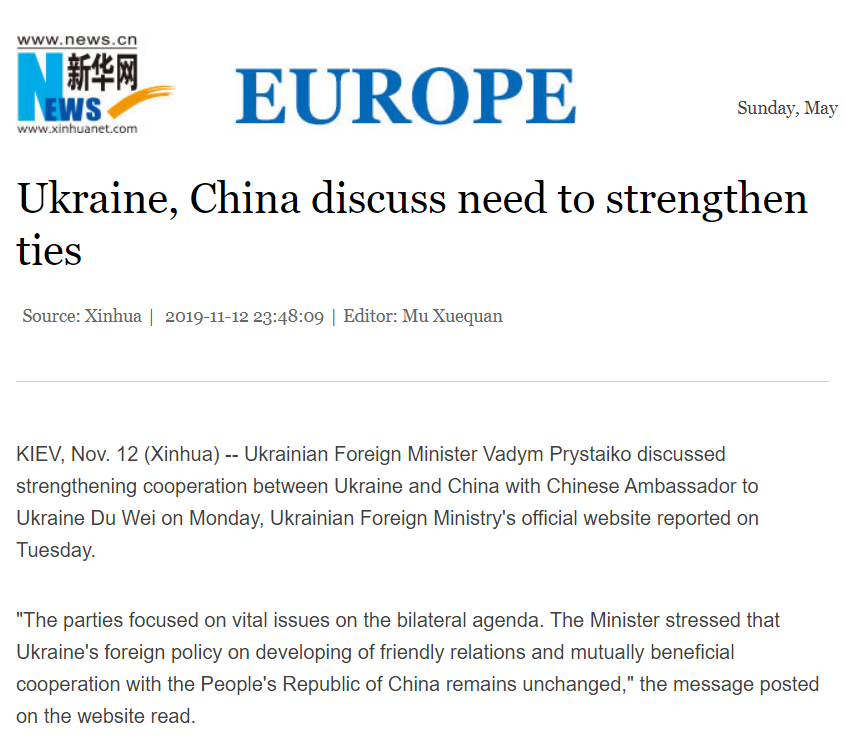 Bilateral trade between the two (2) countries had “grown dramatically” in recent years, the article notes. 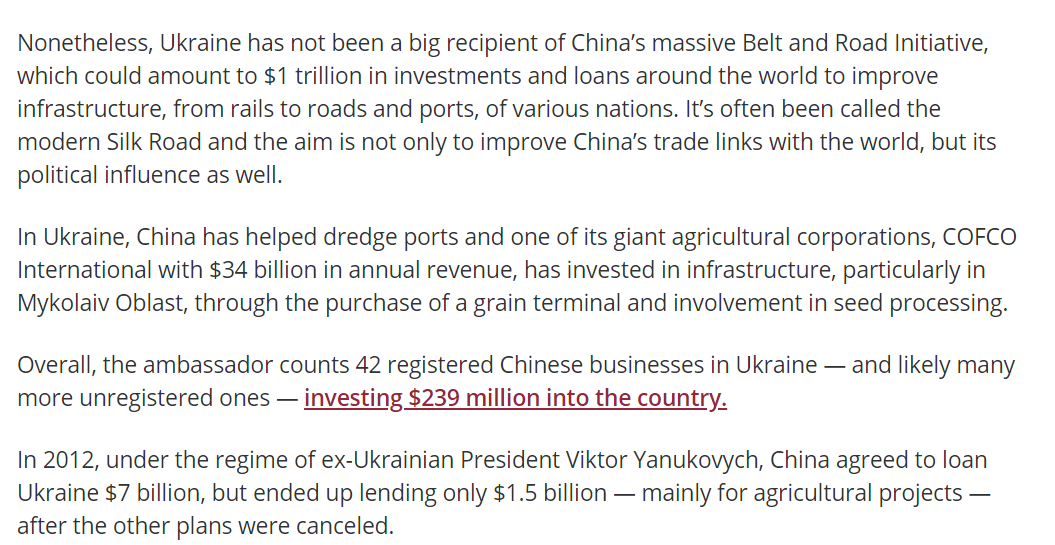 The massive Belt and Road investments cause one to wonder who was really pulling Ukraine’ strings back in 2016?

~~Please check back for updates, this story is still developing.