In another move by China to expand trade and transportation ports in the western hemisphere, eyes are set on Punta Arenas, Chile.

On August 13, 2019, Chilean Foreign Ministry said: “China is in talks with Chile over the use of a port in the South American country to transport personnel and materials destined for explorations programs in Antarctica.”

Port of Punta Arenas has been mainly a port for sea cruises to Antartica. Recently the port in part has become increasingly adapted to be a transport location for larger ships (over 500ft).

What does China bring to the table to offer Chile in exchange for the China-Chile agreement?

In all agreements between China and any country, the process always includes an economic component that generally provides road, rail, seaports as well as clean air and water infrastructure projects.

The lack of transportation infrastructure in this area of Chile is an ideal target for China to use the power of economic infrastructure development to sway opinions outweighing Chile’s objection to the politics of China.

Interestingly enough, transportation between southern Chile to the north and other nearby countries is difficult with only two significant roadways and three railways, one railway is currently unusable.

Southern Chile would benefit with the Chinese partnership, enabling Chile to increase trade.

Southern Chile currently does not possess any overland transportation routes between south and north Chile. The infrastructure development of overland will decrease the high cost of shipping by sea.

Here is the headscratcher: the agreement is to allow China the use of one seaport, the Port at Punta Arenas, and Chile may end up receiving billions of dollars worth of Chinese financial backing for infrastructure development.

State Councilor and Foreign Minister of China, Wang Yi, noted, “the Chinese side appreciates Chile’s active participation in the joint construction of the Belt and Road Initiative, and is willing to align development strategies with the Chilean side and deepen practical cooperation.”

Belt and Road Initiative (BRI), is associated with the One Belt One Road (OBOR) that was proposed by President Xi of China at the 2019 meeting of the G20.

Analysts says relations with critical players like Chile and Australia may give China political leverage in the region.

From the Ministry of Science and Technology of the Peoples Republic of China:

Ninth Meeting of the China-Chile Joint Committee on Intergovernmental Cooperation in Science and Technology held in Santiago, Chile

Minister Wan Gang remarked that science and technology cooperation is an important part of bilateral relations between China and Chile and that the fruitful exchanges and cooperation achievements in the fields of astronomy, renewable energy, and agricultural and earthquake science and technology made by the two sides have promoted social and economic development and livelihood improvement in both countries.

Innovation is the key to more consolidated China-Chile relations, and the two sides should fully leverage the role of the joint committee on science and technology cooperation as a platform, strengthen collaboration in related fields, promote the industrialization of science and technology results, so as to drive industries in both countries to move to the high end of the global value chain and improve the well-being of the peoples of both countries.

President Mario Hamuy spoke highly of Chile-China collaboration in science and technology innovation. He noted that Chile-China cooperation in science and technology enjoys a solid foundation and broad prospects and the Chilean side is willing to undertake practical collaboration with the Chinese side within the framework of the Chile-China Science and Technology Action Program. He said that the Chilean side welcomes the proposal made the Chinese side to set up a joint laboratory and expressed the hope that the two sides could conduct joint technology demonstration and research in fields of common interest and promote personnel exchanges and cooperation between the two countries.

Delegates of the two sides held in-depth exchanges on the topics of Antarctic cooperation, biotechnology, earthquake and earthquake engineering, astronomical observation, renewable energy and the establishment of joint laboratory and put forward plans for China-Chile science and technology cooperation in the next three years.

The meeting was quite productive to layout what objectives the two nations agree to work on, culminating in a memorandum of understanding between China and Chile.


If China emerges from talks with an agreement, Chile could benefit from the cooperation insofar as an infusion of trade and the possibilities of Chinese financed infrastructure projects. The talks also encourage partnership between the two countries for support of many scientific endeavors in Antarctic research stations.

China’s aspirations on the cold continent have been growing steadily since it first joined the Antarctic Treaty in 1983, and it has long been suspected that Beijing is interested in the untapped resources the continent offers. Antarctica is speculated to be home to oil, natural gas, coal, iron ore, manganese and hydrocarbon, as well as 90% of the earth’s fresh water resources, and possibly diamond reserves . It’s also home to fisheries, which include Antarctic Krill and the sought-after Patagonian Toothfish. Despite the challenges of mining in the world’s most inhospitable environment, technological advances over the next 30 years could make mineral resource extraction in the Antarctic a reality.

China has developed a presence in the Antarctic through the establishment of four research stations, three of which are located in the Australian Antarctic Territory (AAT). China has already bestowed Chinese names on 359 sites on Antarctica. Notably, China’s Kunlun (昆仑站) research station, which opened in Australian territory in 2009, is located 7.4 kilometers from Dome Argus (Dome A), close to the center of the continent—a demonstration of China’s commitment to Antarctica. Meanwhile, budget constraints placed on the Australian Antarctic Division have meant that Australia doesn’t possess the resources or equipment to develop a research base in this area. Moreover, China’s newest base, the Taishan (泰山站), which opened in 2014, is also located in the AAT. The Chinese government has recently announced plans to build a fifth research base in in the near future located in the Ross Sea region, which is speculated to be home to oil and gas deposits. 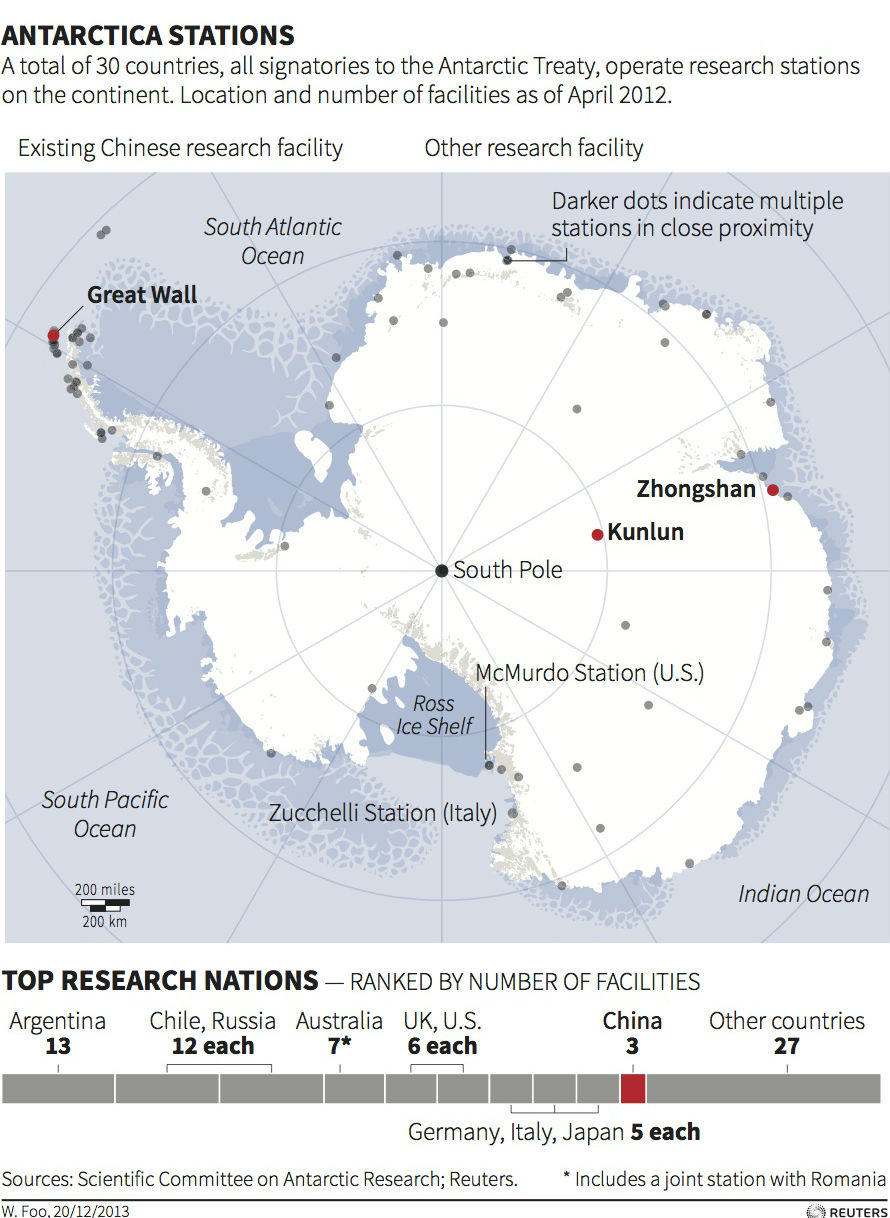 In summer, the station holds up to 40 people; in winter, 14. The station’s No. 1 Building, erected in 1985, lies at the center of the station and has a total floor area of 175 square meters (1,880 sq ft). It marked the beginning of China’s presence in Antarctica and its Antarctic research program. (wiki)

Four years after establishing the Great Wall Station, China’s first research base in Antarctica, Guo Kun led another expedition to Antarctica, with the mission to build a second base.

The team set out from Qingdao in November 1988 on the ship Jidi. After reaching Prydz Bay in Antarctica, the ship encountered a significant icefall on the night of 14 January 1989. She came within just two or three meters of being directly hit by ice and became trapped by icebergs for seven days. Many team members wrote their wills and were ready to die. Luckily, the floes shifted on the seventh day and temporarily created a 30-meter-wide opening, and the team seized the opportunity to escape from the trap. The opening lasted for just two hours before being closed again. The group proceeded to construct the Zhongshan Station at Prydz Bay in only 28 days, and it was opened on 26 February 1989.

In January 2010 the station was visited by a delegation that included Xu Shaoshi, China’s Minister for Land and Resources, and Qu Tanzhou, director of the Chinese Arctic and Antarctic Administration. (wiki)

Located at 4087 m above sea level on the East Antarctic Ice Sheet, making it the highest base in Antarctica. It is only 7.3 km southwest of Dome A, the loftiest point on the Antarctic Plateau. The station officially opened on January 27, 2009. Entirely constructed, the station is planned to cover an area of 558 m². The main building, comprising 236 m², is planned erected in April 2009.

The site is one of the coldest in the world, with temperatures occasionally reaching −80 °C (−112 °F) in the winter. It is indicated, satellite measurements that place nearby could enter a world record −90 °C (−130 °F) temperature.

In April 2012, the first of three Antarctica Schmidt telescopes (AST3), installed at Kunlun Station. The others are planned for installation in 2013 and 2014. A bigger optical telescope, Kunlun Dark Universe Survey Telescope (KDUST), is scheduled to be installed by 2020. (wiki)

Considering China’s three research stations in Antarctica, with more stations planned the question arises, what does this barren continent have on it or in it to garner Chinese attention?

From Reference.com the following are currently known natural resources:

Some of the natural resources of Antarctica include its mineral deposits of iron ore, chromium, gold, copper, nickel, and platinum, marine wildlife and small reserves of coal and hydrocarbons. The majority of human activities in Antarctica are not for commercial or economic purposes, but are rather centered on scientific research and pursuits.

Maybe their quest is for something more valuable?

Some very special Antarctic rocks, containing rare minerals which have never been found anywhere else on Earth, will now be protected under international treaty.

The Stornes Peninsula in the Larsemann Hills region in East Antarctica was recently designated as an Antarctic Specially Protected Area. This determination recognizes the region’s outstanding geological significance and gives it the highest level of environmental protection under the Antarctic Treaty’s Protocol on Environmental Protection.

“Four of these minerals: boralsilite, stornesite, chopinite and tassieite; are entirely new to science; three of which have not been found anywhere else on Earth,” Dr. Carson added.

“Stornes Peninsula is known as a ‘type locality’ for these four new minerals, which is the location where a new mineral is first described,” Dr. Carson explained.

“In addition to these four new minerals there are many more minerals, such as prismatine, grandidierite and wagnerite to name a few, that while rare globally, are actually quite abundant in the Larsemann Hills region.”

Studying these minerals also provides a unique and unusual insight into the geological evolution of the region.

The collaborative work which supported the submission for protection of Stornes Peninsula was undertaken by the Australian Antarctic Division and Geoscience Australia in conjunction with Dr. Edward Grew, a specialist in rare minerals from the University of Maine. The protected area proposal was led by Australia and jointly sponsored by other nations who also have research programs in the broader Larsemann Hills region, including China, India and the Russian Federation.

The proposal was adopted at the Antarctic Treaty Consultative Meeting held recently in Brazil. This decision reflects international acknowledgement of the region’s outstanding geological significance, and the potential vulnerability of these remarkable mineral occurrences to human disturbance.

Current treaties of nations researching Antarctica forbid any mining activity other than small amounts for research.

As China extends its ambition to become the global power, each new agreement unwittingly indebts its partner nation into what looks good on its face, but poses the long-term loss of their sovereignty.

We will continue reporting on any advancement of China’s international tentacles.