December 22, 2019 – China is finally being criticized for its horrific human rights abuses. The communist regime regularly abuses the Muslim Uighurs in physical and psychological ways. According to one prominent activist, Australia and other western countries could be next.

This is a Chinese ”re-education camp”.

Edward Snowden even had something to say on the matter which is odd considering his groups recent turn against a free and open internet.

We are running out of time. pic.twitter.com/oWXmQsP9B8

Gavin Fernando of News.com.au reports in an article entitled ‘Xinjiang, China: Uighur Activist Rushan Abbas Slams ‘Concentration Camps’ which details some of the shocking ways the Uighurs are abused:

Western coverage of one of China’s worst human rights abuses – the mass detainment of over a million Muslim Uighurs – has increased over the past year.

But lesser reported on is a disturbing policy implemented in the northwest region – a forced-living arrangement between Han Chinese men and Uighur women that’s been likened to ‘mass rape’.

In November, various Western media outlets reported that Han Chinese men had been assigned to monitor the homes of Uighur women whose husbands had been detained in prison camps.

The reports came out after an anonymous Chinese official gave an interview with Radio Free Asia, confirming the program but denying there was anything sinister about it.

As part of the ‘Pair Up and Become Family’ program, Han Chinese men stay with and sleep in the same beds as Uighur women.

According to the Chinese Government, the program is designed to ‘promote ethnic unity’.

But to Rushan Abbas, a Uighur activist whose family members have been detained in the Xinjiang camps for more than a year, it’s nothing more than systemised rape – part of the Government’s brutal ongoing crackdown against the country’s ethnic minority.

‘This is mass rape,’ she told news.com.au. ‘The Government is offering money, housing and jobs to Han people to come and marry Uighur people.’

‘Neither the girls nor their families can reject such a marriage because they will be viewed (by Chinese authorities) as Islamic extremists for not wanting to marry atheist Han Chinese. They have no choice but to marry them.’

‘(The Han Chinese) have been raping Uighur women in the name of marriage for years. It took more than a year for the media to pick that up.’ – Gavin Fernando

These totalitarian forms of abuse take on an extra sinister motive when you consider the fact that they are often applied in tandem with technology. This technology enables the Chinese Communist Party to track and harass Uighurs whose family members have been arbitrarily detained. They are able to come up with extreme and perverse methods of psychological warfare and demoralization. Forced abortions are just one of these evils. The article continues:

Hostility towards the Uighur people stems back decades but has increased sharply under China’s current leader Xi Jinping.

The crackdown on Xinjiang is partly fuelled by Islamophobia. Mr Xi’s government is increasingly cracking down on religious worship across the country, but Muslims have been especially targeted.

The crackdown is also economic. Mr Xi has a grand plan in motion to put his country at the economic and political centre of the world.

These ambitions are best summed up by the Belt and Road Initiative, a trillion-dollar project that seeks to connect countries across continents on trade, with China at its centre.

The camps in Xinijang are given various names in the media. Some refer to them as ‘mass internment camps’. Others call them ‘surveillance facilities’, ‘re-education camps’ or simply ‘detention centres’.

But Ms Abbas repeatedly refers to them as ‘concentration camps’ and warns if the Western world doesn’t intervene, the mass detention will turn into mass murder.

‘Our children are unable to speak our language and understand our culture,’ she said. ‘They are taken to state-run orphanages and are completely indoctrinated.’

‘I’m afraid this will turn into mass extermination. There’s nothing better to describe what’s happening in Xinjiang than concentration camps. What are we waiting for? Mass executions and gas chambers before we take action? What is it going to take to have the leaders of world communities – particularly Western democratic countries like Australia – to act? Executions? Is that what it’s going to come down to?’ – Gavin Fernando

Ms. Abbas is concerned that the broad surveillance and tracking technology that China employs will allow it to follow the Uighurs around the world. This capability can then quickly translate into the application of spycraft and social engineering to transplant this abuse to other countries.

This painting is about Falun Gong practitioners in China that have been subjected to numerous methods of torture while illegally incarcerated in prisons, forced labor camps, detention centers, etc. Hanging heavy objects around the neck is among the most used torture methods. pic.twitter.com/819IuDvPpF

The physical torture is often brutal and cruel. While they are abusing the victim, members of the Communist Party tell them that they are not really being abused, that this is being done “out of love” and to “purify” them. It’s a common tactic of pathological narcissistic abusers and the gas-lighting causes serious psychological trauma.

Sexual humiliation, including being video taped in the shower, and torture methods that inflict pain on female genitalia.

Muslim women who fled China for Kazakhstan recount their ordeals.https://t.co/4vcygvmJhD 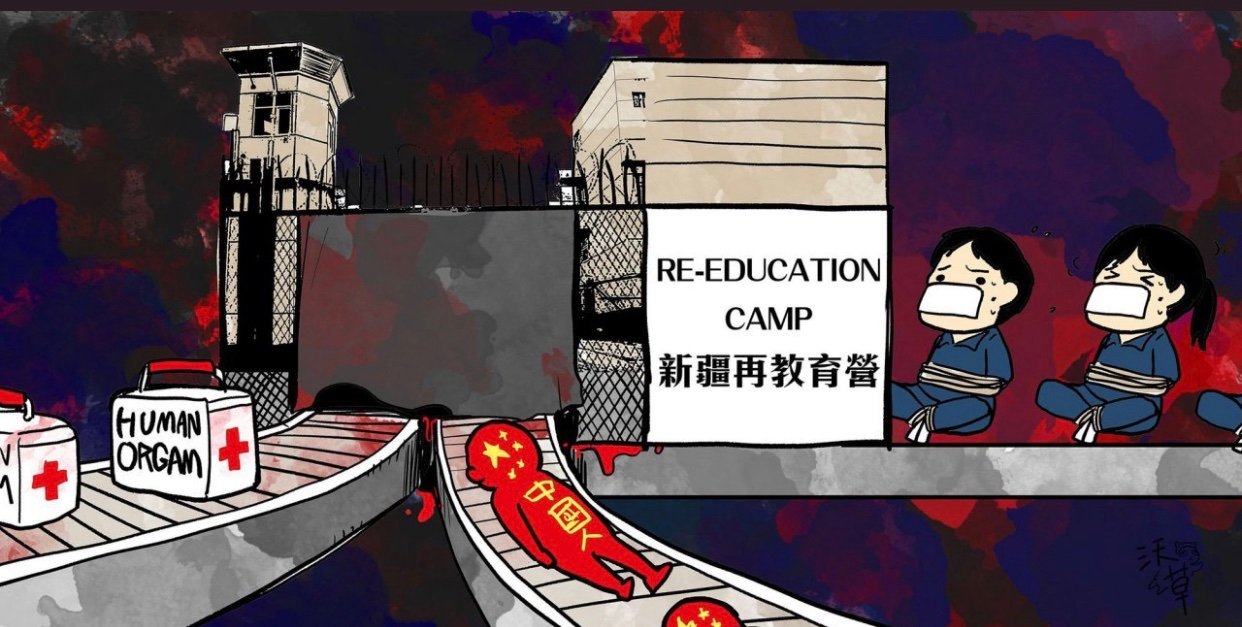 #China continues to torture its prisoners in the most unthinkable ways.#chinazi pic.twitter.com/SlWMqNCr0X

They are crying out for help; one message made its way all the way to a British grocery store. “Please help us” the note reads.

We need to raise our voices this is an eye opener we must all see https://t.co/dUOShYKlDR it gives me goose bumps

How about what the United Nations itself says about China's treatment of Muslims in Xinjiang? e.g.
– "widespread torture, ill-treatment and … detention of … ethnic minority groups"
– "mass detention and 're-education' of Muslim minority groups" https://t.co/HLTy3VJ77T

– Gang rape, regardless of gender.

If this isn’t systematic #genocide or #EthnicCleansing, then I don’t know what is. #China #ConcentrationCamps pic.twitter.com/ayE2D2t45t

China is an example of what happens when you give a violent communist regime technology and weapons. They have built a complex surveillance state complete with feudalistic social credit system and re-education camps. China is now extending its long arm and its long march into America as well as other western nations under the pretext of economic and educational endeavors. In the words of Secretary of State Mike Pompeo, this is one of the greatest “stains” in the world today.