China continues more land grabs as reported in Part One of this article. The Chinese government, in tandem with other lands being acquired, has increased its appetite for more strategic investments around the globe.

An article in “The American Spectator” by Brandon J. Weichert explores this topic and in part wrote:

After all, Trump’s tariffs and overall pressure campaign against China has been working. We can see how it has fundamentally weakened China’s economy (and therefore its autarkic political system). Whether speaking about the obvious Hong Kong protests that threaten to fundamentally destabilize China’s tenuous political system, or the severe crackdown on Muslim Uighurs and Evangelical Christian populations, Beijing is worried about American-induced political disharmony. The disharmony is being exacerbated by the Trade War.

Meanwhile, China’s economy continues its rapid slowdown. Some of this is simply because China is transitioning from an old world-type manufacturing economy with a high-savings rate into a post-industrial, consumption economy with a higher debt load. Yet, Trump’s Trade War is intensifying the decline — and putting the proverbial squeeze on those Communist leaders in Beijing, who have spent decades in an unremitting economic war against the United States.

October 18, 2019, in Gingrich 360, “The Export-Import Bank Can Help Deal with the China Challenge,” the former Speaker wrote the following:

In the age of Huawei, the Belt and Road Initiative, and China’s state-sponsored companies, we need the US Export-Import (EXIM) Bank more than ever.

The EXIM Bank, an independent agency, provides government-backed financing for those looking to export goods and services from the United States. Since the 1930s, it has helped grow the US economy and foil unfairly aggressive foreign competitors. However, due mostly to recent politics, it hasn’t been fully functioning since 2014. This needs to change – for many reasons.

First, according to Chinese Defense Minister Wei Fenghe, the country’s Belt and Road Initiative (BRI) is absolutely a part of its military plans. This comes after years of the Chinese Communist Party insisting the worldwide infrastructure scheme is only focused on economics and international cooperation. Wei plainly said future Chinese military cooperation would fit ‘within the framework of BRI.’

In 1993 U.S. President Clinton closed the Long Island Naval Base California. Initially, the base was placed on the Military Base Closure-List by then-President Bush in 1991.

Between 1995-1996, the Clinton administration actively intervened to make sure a Communist Chinese cargo container shipping interest got a too-good deal on a Long Beach, California, shipping terminal.

… Forced by a court order, Port of Long Beach officials have now set March 12, 1997, for a new public hearing on plans to bulldoze the Naval Station and lease the property to the Communist Chinese shipping company.

… Clinton was so eager to push the deal through that he met twice with Long Beach officials and once at a White House meeting in 1995 that included his then-chief of staff and the Pentagon’s No. 2 official and others.

The deal finally approved by the Secretary of the Navy turns over control of the Long Beach Naval Station, with a value of at least $65 million, free of charge to the City of Long Beach. The city has agreed to lease it to the China Ocean Shipping Co. (Wiki) of the People’s Republic of China.

… The Chinese will lease the Long Beach Naval Station base for a 10 year term at a fee of $14.5 million per year. The Chinese will have the option to expand the perimeter of the operation onto another 150 acres of old Navy shipyards that will be developed at the City of Long Beach taxpayer’s expense.

Officials at the Chinese shipping interest’s headquarters in New Jersey and in Beijing refused to comment or respond to questions about President Clinton’s involvement. The Free Republic

Now, why would Clinton want a Communist China owned shipping company to lease the former Naval base? 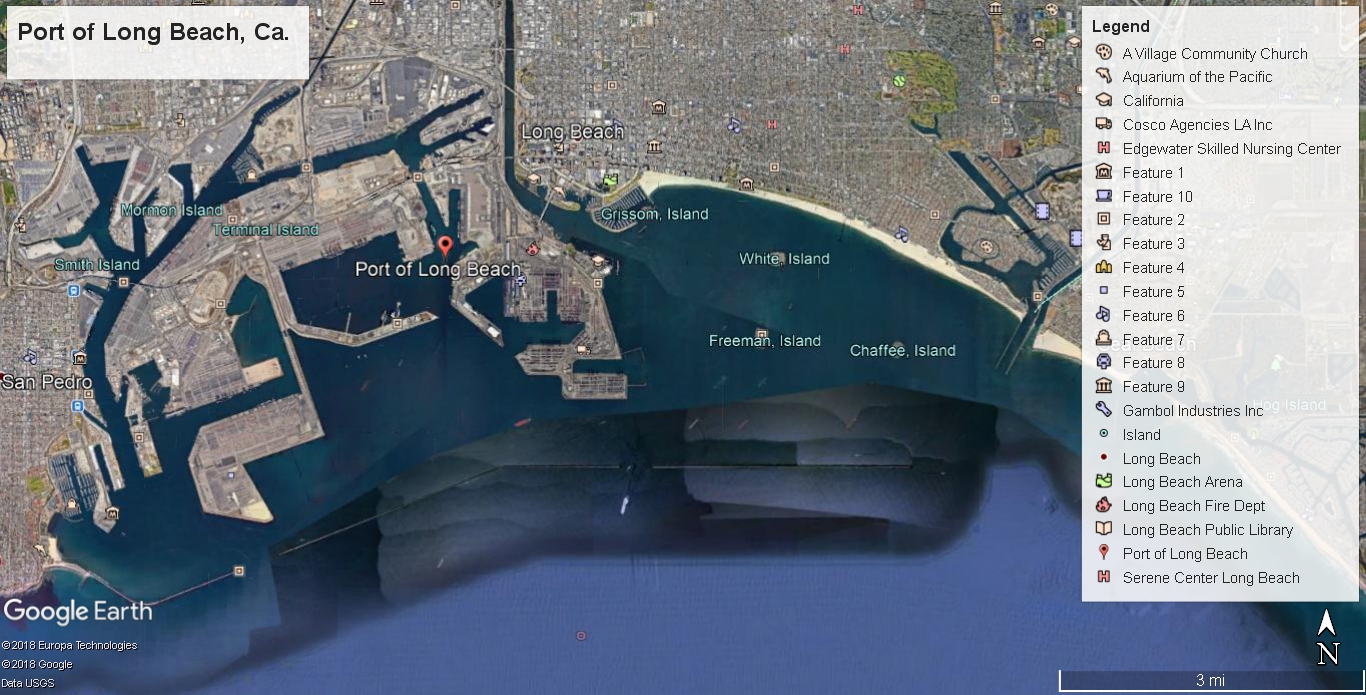 LONG BEACH DESK – The Long Beach Naval Station was tentatively placed on the Military Base Closure-List by President George Bush in 1991. President Bill Clinton, closed the naval base last in 1993. That resulted in the loss to Long Beach, California of 17,500 military and civilian jobs. The economic impact of the of loss was $52.5 million and drove the California economy into the tank. It has never recovered.

Between 1995-1996, during the heat of the Clinton-Gore Campaign fund raising activity, the Clinton administration actively intervened to make sure a Communist Chinese cargo container shipping interest got a too-good deal on a Long Beach, California, shipping terminal.

The Secretary of the Navy has formally turned the base over to the City of Long Beach. But, the Port of Long Beach has signed a letter of intent to lease the property to the China Ocean Shipping Co., a steamship line run by the Communist Chinese government.

The Navy base property is about to be leased to a Communist China-owned shipping company under an agreement that was only made possible by the intervention of the White House.

Forced by a court order, Port of Long Beach officials have now set March 12, 1997 for a new public hearing on plans to bulldoze the Naval Station and lease the property to the Communist Chinese shipping company.

Representative Cunningham brings up several objections to the sale of the Port of Long Beach to the Chinese Communist controlled COSCO.

Rep. Cunningham recognized the strategic placement of the Chinese expansionism assets is a national security risk.

Rep. Cunningham spoke of the Hunterson Group, now “Hutchison Whampoa Ltd.“, a Hong Kong-based conglomerate, which controls both ends of the Panama Canal. 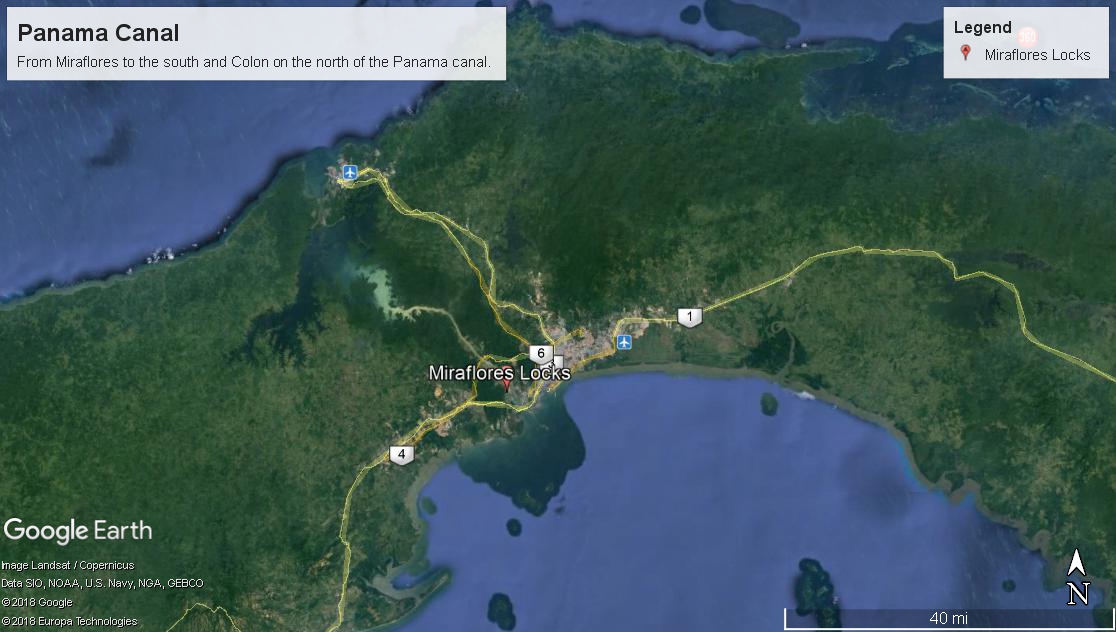 From Wikipedia, the free encyclopedia —

The Panama Canal (Spanish: Canal de Panamá) is an artificial 82 km (51 mi) waterway in Panama that connects the Atlantic Ocean with the Pacific Ocean. The canal cuts across the Isthmus of Panama and is a conduit for maritime trade. Canal locks are at each end to lift ships up to Gatun Lake, an artificial lake created to reduce the amount of excavation work required for the canal, 26 m (85 ft) above sea level, and then lower the ships at the other end. The original locks are 34 m (110 ft) wide. A third, wider lane of locks was constructed between September 2007 and May 2016. The expanded canal began commercial operation on June 26, 2016. The new locks allow transit of larger, neo-Panamax ships, capable of handling more cargo.

France began work on the canal in 1881, but stopped due to engineering problems and a high worker mortality rate. The United States took over the project in 1904 and opened the canal on August 15, 1914. One of the largest and most difficult engineering projects ever undertaken, the Panama Canal shortcut greatly reduced the time for ships to travel between the Atlantic and Pacific oceans, enabling them to avoid the lengthy, hazardous Cape Horn route around the southernmost tip of South America via the Drake Passage or Strait of Magellan and the even less popular route through the Arctic Archipelago and the Bering Strait.

Colombia, France, and later the United States controlled the territory surrounding the canal during construction. The US continued to control the canal and surrounding Panama Canal Zone until the 1977 Torrijos–Carter Treaties provided for handover to Panama. After a period of joint American–Panamanian control, in 1999, the canal was taken over by the Panamanian government. It is now managed and operated by the government-owned Panama Canal Authority.

Annual traffic has risen from about 1,000 ships in 1914, when the canal opened, to 14,702 vessels in 2008, for a total of 333.7 million Panama Canal/Universal Measurement System (PC/UMS) tons. By 2012, more than 815,000 vessels had passed through the canal.[2] It takes 11.38 hours to pass through the Panama Canal. The American Society of Civil Engineers has ranked the Panama Canal one of the seven wonders of the modern world.

“Jimmy Carter never would have been able to ram through his two treaties giving away our Panama Canal if the Senate in 1978 could have looked into the future and known that, when the U.S. Flag is lowered on December 31, 1999, Red China would become its gatekeeper. But that’s what’s scheduled to happen unless Congress takes immediate action to prevent it.

Don’t expect the Clinton Administration to interfere with China’s stunning beachhead in the Western Hemisphere. Clinton is hopelessly indebted to the Chinese and their allies in Indonesia for financing his presidential elections in 1992 and 1996.

China didn’t need to send an invading army. Because of what is euphemistically called “free trade,” China has plenty of cash to buy and bribe its way into our domain.

Communist China is the greatest national security threat to America today and in the foreseeable future. At a major meeting in Beijing in 1994, China designated the United States as its primary global rival. China is rapidly building a modern war machine with 18 long-range and 140 intermediate and medium-range missiles. It’s based on espionage, theft, trade deals that include technology transfers, and cash provided by a $60 billion-a-year favorable balance of trade.

Every month, China collects up to $6 billion in U.S. cash by selling its slave-labor products to Americans, but China buys only $1 billion worth of U.S. goods. The Chinese pocket the $5 billion a month difference and use it to build their military-industrial complex.”

Chinese weaponization of trade routes throughout the western hemisphere, has slowly extended its strategic control of Chinese ports in the hemisphere, presenting a challenge to the United States.

China’s high percentages of port control enables their ability to control the flow of trade, including military movements. The seaports are regarded as a crucial part of trade around the world.

* This part of the article gives a partial overview of Chinese maritime control in the western hemisphere. Part Three will discuss China’s military weapons of war.