On February 2019 both the US State Department Rewards for Justice and the FBI offered a reward of one million dollars for information of Hamza bin Laden’s whereabouts.

On July 31, 2019, it was reported that the U.S. has obtained intelligence that bin Laden is dead. The report said he was killed sometime during past two years, and that the United States government had a role in the operation, but that his death had only recently been confirmed. His last known public statement was in 2018. He was reportedly already dead in February 2019 when the State Department offered a reward for his whereabouts. Wikipedia Hamza bin Laden is believed to have been born in 1989. His father founded the radical islamic terrorist group Al Qaeda and claimed responsibility for the “September 11, 2001 attack on NYC’s World Trade centers and the Pentagon which took the lives of  2,996 people, injured over 6,000 others, and caused at least $10 billion in infrastructure and property damage. People continue to die of  9/11-related cancer and respiratory diseases in the months and years following the attacks”. Wikipedia

In an Osama bin Laden 2004 recording he stated, “God knows it did not cross our minds to attack the Towers, but after the situation became unbearable—and we witnessed the injustice and tyranny of the American-Israeli alliance against our people in Palestine and Lebanon—I thought about it. And the events that affected me directly were that of 1982 and the events that followed—when America allowed the Israelis to invade Lebanon, helped by the U.S. Sixth Fleet. As I watched the destroyed towers in Lebanon, it occurred to me punish the unjust the same way: to destroy towers in America so it could taste some of what we are tasting and to stop killing our children and women.”

“The CIA’s release of documents seized during the 2011 raid that killed al-Qaeda leader Osama bin Laden appears to bolster US claims that Iran supported the extremist network leading up to the Sept. 11 terror attacks. US intelligence officials and prosecutors have long said Iran formed loose ties to the terror organization from 1991 on, something noted in a 19-page al-Qaeda report in Arabic that was included in the release of some 47,000 other documents by the CIA.  Three US officials have confirmed that the younger bin Laden was killed in the past two years, but that it took time to confirm his death. The United States reportedly had a role in the killing, though details of the death are still unknown.” Bangkok Post

During the Navy SEAL raid of Osama bin Laden’s compound in Abbottabad, Pakistan where the then leader of Al Quaeda was killed in 2011 it was thought that his son Hamza had also been killed. Later it was determined that bin Laden’s eldest son Khalid was killed.

“There has been confusion over whether Khalid, or his younger brother Hamza, was killed in the raid. White House Counterterrorism adviser John Brennan initially reported, on May 2, that Hamza was killed, but this was later determined to be “a clerical error” and Khalid was named as the dead son.”  Long War Journal  It’s not known for sure if Hamza was at the Abbottabad house at the time of the raid. However, the Wall Street Journal reported that “a Pakistani intelligence official said bin Laden’s 12-year-old daughter told them that the Americans took two people when they left, including bin Laden.”

“Hamza bin Laden was implicated in the 2007 assassination of former Pakistani Prime Minister Benazir Bhutto. However, according to an interrogation of former al-Qaeda spokesman Sulaiman Abu Ghaith, Hamza was under house arrest in Iran when Bhutto was assassinated and was not released until 2010.” Wikipedia

The most hunted terrorist in the world managed to evade capture for years on end, but the same can’t be said for much of his family. In the aftermath of the September 11 attacks a gaggle of bin Ladens illegally entered Iran and were placed under house arrest. Requests to send them to Saudi Arabia were quickly shot down. The nations have an antagonistic relationship, and Iran had no interest in changing that per ABC News” Grunge

“One day in the fall of 2001, with yet another foreign invasion brewing, a father sat with three of his young sons in the shade of one of the few remaining olive trees. Together, they performed a simple farewell ceremony. To each of the three boys, the father gave a misbaha—a set of prayer beads symbolizing the 99 names of God in classical Arabic. Then the father took his leave and disappeared into the mountains, heading for a familiar redoubt known as the Black Cave—or, in the local Pashto language, Tora Bora. “It was as if we pulled out our livers and left them there,” one of the sons recalled in a letter in 2009.

The boy who wrote that letter was Hamza bin Laden, a son of Osama bin Laden, who was then the leader of Al-Qaeda. Hamza was to spend most of the next decade in captivity. He grew up behind bars, missing his father deeply. “How many times, from the depths of my heart, I wished to be beside you,” Hamza wrote to him in the letter. “I remember every smile that you smiled at me, every word that you spoke to me and every look that you gave me.”

“Hamza grew up with a fervor for jihad and a determination to follow in the footsteps of his notorious father. And toward the end of his life, the older bin Laden began grooming Hamza for a leadership role. He even made plans for Hamza to join him in his secret compound in Abbottabad—the place where Navy SEALs ultimately shot him dead. But 16 years after their farewell under that olive tree, Hamza’s emergence as a jihadi leader, along with several of his father’s most trusted and competent lieutenants, portends an Al-Qaeda resurgence.” Founders Code

“Hamza is being prepared for a leadership role in the organization his father founded” and was “likely to be perceived favorably by the jihadi rank-and-file. With the Islamic State’s ‘caliphate’ apparently on the verge of collapse, Hamza is now the figure best placed to reunify the global jihadi movement,” counter-terror expert and former FBI agent Ali Soufan said in 2017. 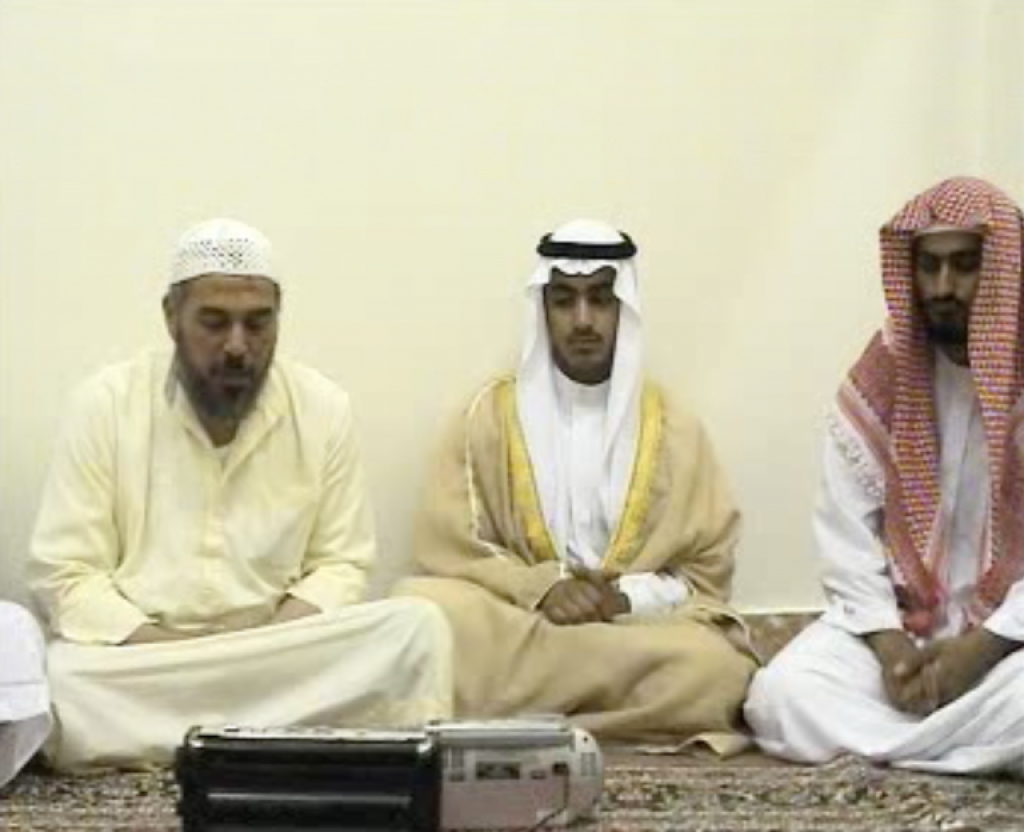 “Hamza bin Laden is confirmed to have married the daughter of al-Qaeda’s second-in-command, Abdullah Ahmad Abdullah, who is deputy to current leader Ayman al-Zawahri.” Al Arabiya see the video of the wedding here.

Hamza bin Laden has been given a more prominent role within Al-Qaida, and is considered to have the capability to follow through with his threats. Hamza’s popularity is increasing amongst followers of Al-Qaida, and he has become the most probable successor of a new version of Al-Qaida. Hamza seeks to grow Al-Qaida’s network and use a new phase of terrorist attacks in major Western cities to raise his profile and announce the return of Al-Qaida with himself as a new leader.

Hamza bin Laden has been given a more prominent role within Al-Qaida, and is considered to have the capability to follow through with his threats. Hamza’s popularity is increasing amongst followers of Al-Qaida, and he has become the most probable successor of a new version of Al-Qaida. Hamza seeks to grow Al-Qaida’s network and use a new phase of terrorist attacks in major Western cities to raise his profile and announce the return of Al-Qaida with himself as a new leader. (un.org)