Hispanola, is the most populous island within the Caribbean archipelago known as the Greater Antilles in the West Indies. It is the region’s second-largest island after Cuba, with an area of 76,192 square kilometers (29,418 sq mi).

The island is divided into two sovereign nations, the Dominican Republic and Haiti. 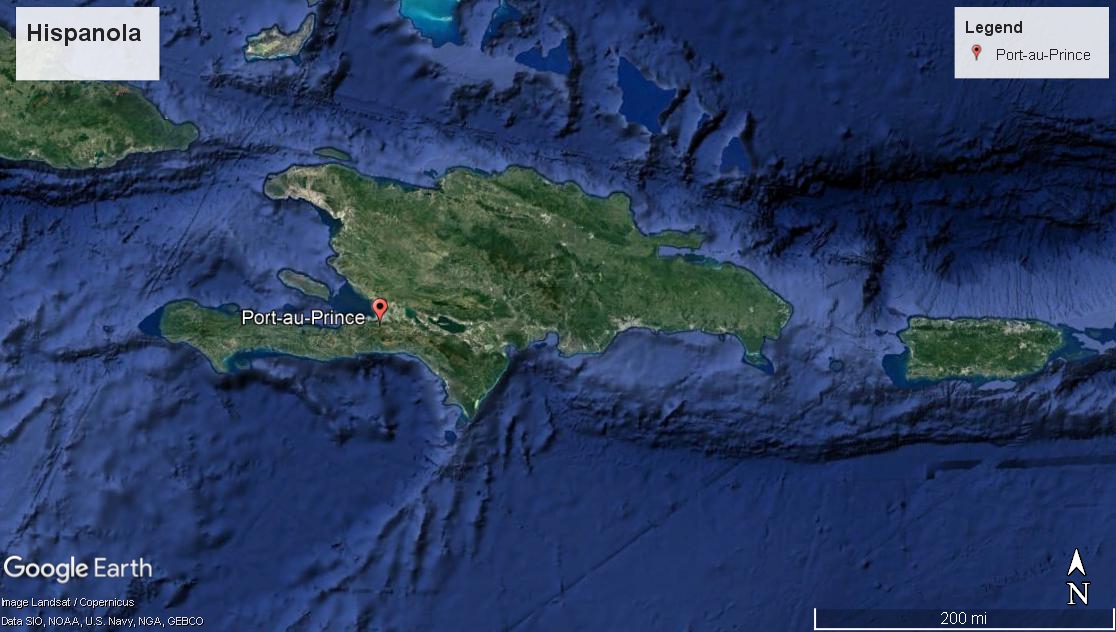 On January 12, 2010 Haiti was struck by an earthquake, killing more than 230,000 people and injuring 300,000. Medical facilities in the disaster-affected region were almost destroyed. Then again on October 6, 2018 a magnitude 5.9 earthquake struck 19 kilometers northwest of Port-de-Paix, Haiti. The earthquake damaged structures and killed 18 people.

When the earthquake struck, the Dominican Republic rushed in tons of food, water, and supplies to help Haitians. They also opened their borders to international aid workers coming into Haiti and gave university students with ties to Haiti conduits to go back and help their families without any penalty. Also, the Dominican people and officials organized fundraisers and donated money to the Haiti relief effort.

Four months after the January 12th earthquake that destroyed Port-au-Prince, there were signs that the almost 200-year tension between the Dominican Republic and Haiti, both sharing the island of Hispaniola, might be reaching a seminal moment for the better.

Shortly after the devastating earthquake that rocked the island of Hispanola in 2010, Governments and Organized Relief Agencies worldwide flocked to the Island to help clean up major cities in Haiti, the worst areas hit by the earthquake, and try to control the chaos.

On 27 January, WHO (World Health Organization) in Haiti also identified the types of medicines and supplies needed at that present time. These needs were identified in the following attachment:

WHO wants to avoid the supply of inappropriate medicines and equipment to Haiti and, instead, ensure essential medical supplies are identified and provided so to best support the health relief efforts underway in the country.

Medicines and medical equipment are an essential element in alleviating suffering, and international humanitarian relief efforts can greatly benefit from donations of appropriate medical supplies.

Unfortunately, disasters do not always lead to an objective assessment of emergency medical needs based on epidemiological data and past experience. Very often an emotional appeal for massive medical assistance is issued without guidance on what are the priority needs. The result is that  many donations may cause problems instead of being helpful.

On January 19, 2010, the editors of GQ magazine listed the Top Ten Organizations to help in the relief in Haiti, the hardest hit in the 2010 earthquake.

Doctors Without Borders has sent more than 130 doctors to Haiti where they’ve set up a hospital in Carrefour and treated hundreds of patients a day. DWB also trains and maintains a Haitian staff. Donations go toward sending more doctors, supplies, and medicine.

Partners in Health, which has been working in Haiti for 20 years, is organizing and dispatching a volunteer corps of doctors and nurses and gathering supplies. The work of PIH aims to provide individual patient care, to address the root causes of disease in communities, and to share lessons learned around the world.

International Medical Corps has sent teams of healthcare workers to treat crush injuries, trauma, and other critical cases. The organization is currently running a 700-bed hospital in Port au Prince and a makeshift clinic in a hotel.

AmeriCares airlifts medical supplies to help critically injured patients. Its emergency response team in Haiti is working to distribute medicine and supplies to hospitals and health clinics treating the injured.

Action Against Hunger/ACF International has focused primarily on food, water, sanitation, and hygiene programs in both emergencies and development contexts in major cities. This week, the organization is aiming to send 45 tons of emergency food rations sufficient to meet the nutritional needs of 18,000 children under five years of age for two weeks.

Save the Children Federation has a dual mission of delivering immediate aid to children and families in Haiti while developing a long-term plan to provide infrastructure for rebuilding. The organization has longstanding roots in Haiti, with a base of operations in the country since 1978.

Mercy Corps is running a sophisticated program to provide clean drinking water to Haiti. Through a partnership with the water treatment and transport corporation ITT, the organization is hoping to bring five water-filtration devices to supply as many as 25,000 people with clean water. MC is also providing sanitation, trauma support and implementing programs for long-term job creation.

Among the largest organizations, the Salvation Army has more than 700 workers permanently stationed in Haiti. An additional influx of international volunteers is helping to deliver medical support, vitamins, and food. In the US, the Salvation Army is teaming up with corporate partners and vendors to send bulk food, water, and other basic supplies to Haiti.

American Jewish World Service has created the Haiti Earthquake Relief Fund to support longer-term recovery including the rebuilding of community centers, clinics, and schools; replanting of crops and farms to reestablish the local food supply and provide a source of income, and supporting community-based organizations’ efforts to rebuild civil society.

Blue Helmets of the United Nations have been deployed several times during political outbreaks in Haiti while the nation’s political environment deals with social unrest.

The United Nations Stabilisation Mission in Haiti (UNSTAMIH) (French: Mission des Nations Unies pour la stabilisation en Haïti), also known as MINUSTAH, an acronym of the French name, was a United Nations peacekeeping mission in Haiti that was in operation from 2004 to 2017. The mission’s military component was led by the Brazilian Army and the force commander is Brazilian. The force is composed of 2,366 military personnel and 2,533 police, supported by international civilian personnel, a local civilian staff and United Nations Volunteers.

Following the 2010 Haiti earthquake, the United Nations reported that the headquarters of the mission in Port-au-Prince had collapsed and that the mission’s chief, Hédi Annabi of Tunisia, his deputy Luiz Carlos da Costa of Brazil, and the acting police commissioner, RCMP Supt. Doug Coates of Canada were confirmed dead. On 14 January 2010, UN headquarters dispatched the former head of MINUSTAH ( and current Assistant Secretary-General for Peacekeeping Operations, Edmond Mulet, as the organization’s Acting Special Representative of the Secretary-General and interim head of MINUSTAH.[5] Mulet clarified on 22 January 2010 that MINUSTAH would concentrate on assisting the Haitian National Police in providing security within the country after the earthquake, while American and Canadian military forces will distribute humanitarian aid and provide security for aid distribution.

When the UN troops left Haiti, unfortunately they left behind children they had fathered and the children’s mothers in the squalor that Haiti had become.  Not only did the UN presence fail Haiti, but Relief Aid had not fulfilled its missions.

This agreement was much different from those with other nations in which Chinese bankers finance infrastructure projects. This agreement includes one condition: Haiti would ally with China and break its ties with Taiwan.

Under this agreement, not only does Haiti receive financial aid for infrastructure projects, but they also agreed to have FREE TRADE between the two nations.

Without the financial capabilities to pay the extensive debt associated with the infrastructure projects leaves Haiti  vulnerable to Chinese influences.

This begs the question: exactly what accounts for this level of Chinese interest in Haiti?

Becoming partners with China, the Chinese One Belt One Road policy (OBOR) adds another foothold to its already extensive network of trade and political influence, including a military outpost.

The earthquake’s devastation in Haiti may have given the nation another source for exploration and developing gas and oil. The country only needs an effective way of extracting the newly found source to help bring the gas and oil to the world market.

The Island of Hispaniola has long been allied with Taiwan rather than China, but the Chinese government has been flirting with Haiti to become an ally.

To cement the Chinese agreement, China has proposed several infrastructure projects. These projects, such as rebuilding roads and railways, will allow access to natural resources that are vital for Haiti rebuild its economy.

New projects proposed between the two nations give China yet another source to exploit another nation’s natural resources. The infrastructure projects would enable sustainable means to transport Haiti’s resources from mine or wells to the seaports.

With a free trade as part of the Sino-Haitian agreement, Haiti’s economy is strengthened and China gains another free trade agreement.

This agreement seems more of a political move by China to entice countries to rebuke Taiwan and join with China.  Taiwan also serves as a U.S. military buffer to ward off Chinese control in the Pacific Ocean.

The Chinese battle for strategic holdings throughout the world has bolstered China’s power. The footholds gained by China are worldwide, gathering wealth, political influences, and military presence.

~China is continuing its quest for Global Domination and we will be following their steps as they arise.

No mention in article of Clinton Foundation getting their pockets lined with the Haitian “relief” efforts? Millions arrived.. Haiti still in poverty..byet Dominican is getting rebuilt faster.. Hmm. Curious as to why?

Socialist vs Capitalist? Or Haitian govt took most of money off shore to Switzerland or laundered it perhaps.