On July 19, 2019 US District Court in the Eastern District of New York unsealed an arrest warrant for a naturalized American Citizen named Ruslan Maratovich Asainov for providing “material support or resources” to the Islamic State of Iraq and Syria (ISIS). The NYPD and FBI NY Joint Terrorism Task Force, collaborated in their efforts to take down this ISIS recruiter which resulted in a five count indictment filed on September 3, 2019 in a Brooklyn Federal Court. He is charged with conspiracy to provide material support to ISIS; providing material support to ISIS in the form of personnel, training, expert advice and assistance and weapons; receipt of military training from ISIS; and Obstruction of Justice. Although the full indictment is sealed, some portions that have been released gives us some insight about the charges. 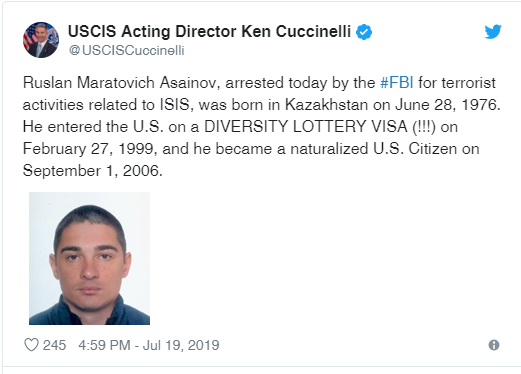 Asainov was born in Kazzakhstan in 1977 and emigrated to the US in 1999 through the US Diversity Visa Lottery program, as reported by Breitbart, and became a Naturalized US Citizen in September 2006. He resided in Brooklyn, New York between 1998 and 2013 and according to a former neighbor, he was married and had a daughter. On December 24, 2013, Asainov purchased a one way ticket from JFK Airport to Istanbul, Turkey. He arrived in Istanbul on December 25, 2013 and stayed in a hotel there until December 27, 2013.  It was after this he entered into Syria and joined with ISIS to become a sniper for the Caliphate. Before too long he was promoted to the role of Emir within the organization and became responsible for training ISIS fighters in the use of weapons. 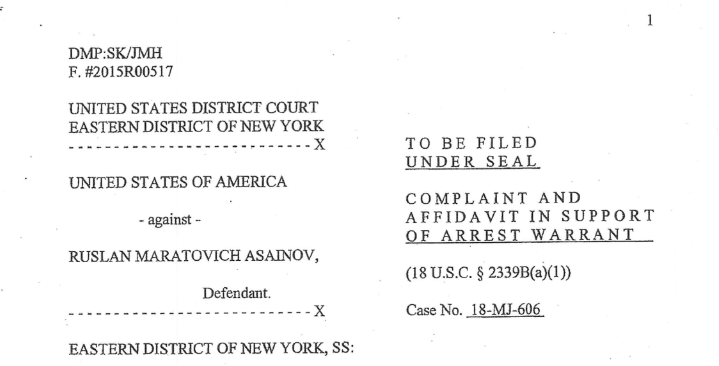 The warrant states that Asainov sent a message, though to whom is redacted, with a photo attached showing three dead soldiers. In the same message he stated “…we are dying here…” and referred to the dead soldiers as “young men, friends who died in the last battle”.  Law enforcement’s review of the photo determined a patch one of the deceased was wearing identified him as an ISIS fighter.

In January 2015, there was a message issued by Asainov, though unclear to whom, with something akin to a threat wherein he referred to himself as a member of ISIS saying the recipient will be scared for the rest of their life:

As if these chilling words were not enough, he stated in another series of messages “we are the worst terrorist organization in the world that has ever existed” and made mention of “infidel planes flying around” as he added that he wished to die on the battlefield.

Law enforcement in the US becoming aware of Asainov enlisted the aid of a confidential informant. The informant was an individual who had met Asainov sometime around 2008 and maintained periodic communications with him. The Informant told law enforcement that around August 2014, Asainov posted to an online group chat, with the use of a telephone, congratulating “All Muslims” for their gains in Syria. This aligned with the timeline of ISIS taking control of territories and oil and gas installations in Syria in 2014. Afterwards, the Informant reached out to Asainov through an undisclosed messaging app. Suspicious of the informant, Asainov asked him/her to provide proof of identity with a photograph and the informant complied. Asainov satisfied with the verification of the informant’s identity continued to communicate with him/her more regularly.

Asainov attempted to recruit the informant to come to Syria and join ISIS promising a job, housing, food and a $50 per month stipend. He suggested that the informant’s fluency in English would be a benefit to the terrorist organization’s media operations and even encouraged him/her to bring the family along and promised escort from Turkey into Syria.

In March 2015, Asainov requested that the informant send him money to the tune of $2,800 so that he could buy a scope for his rifle. The informant did not send him any money, but in April 2015 asked Asainov about his experiences on the battlefield. Asainov stated he had been actively fighting for about a year since his arrival in Syria and mentioned the airstrikes the US and Allied Forces had been carrying out. He also sent the informant two photos of himself dressed in fatigues and wielding a large caliber assault rifle equipped with a scope and stating:

I thought you asked for this kind of picture. Didn’t mean to show off cause here is just normal. But for you it’s motivation. I mean normal look like this. Everyone is with the weapons in the masjid (Mosque) on Jumah, in the store on the playground with kids.

In his conversations with the informant, according to the warrant, Asainov specifically mentioned being in areas specifically under the control of ISIS, including Kobani, Derezor and Tabka during his time there.

The details of his capture are unclear, only that he was captured by US Allies in Syria and transferred into FBI custody on July 18, 2019 and returned with him to the US landing at JFK International Airport.

Due to concerns the US Government has in releasing further information so as not to compromise sources and methods, they requested that the court keep the complaint and other documents under seal. The Justice Department released a statement as to the arrest on Wednesday September 14, 2019 giving a brief overview of the case which can be seen below or read here. 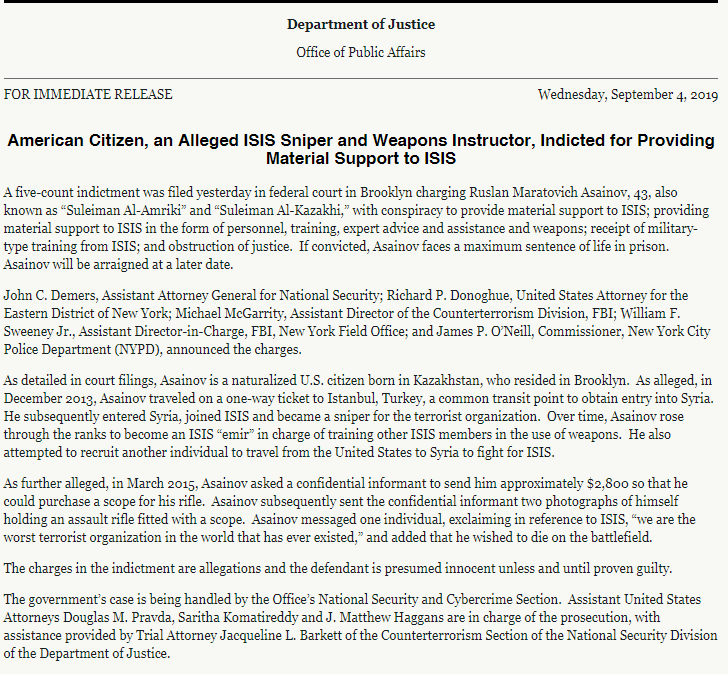