May 15, 2020 – Secretary of State Mike Pompeo recently warned Israel about investing in China, something most American politicians were too afraid to do, or were paid not to mention.

While visiting Jerusalem, Pompeo brought up the fact that Israeli tech companies have worked with the Communist Chinese Party (CCP) thereby strengthening the CCP while supplying critical technology with military applications. A capability to build weapons of that sort enables China to put American lives and Israeli lives at risk.

If you have been following our reporting on China and the Belt and Road Initiative (BRI) you will know Israel has signed onto the project. They have also turned over control of the Haifa Port in Israel (its largest) to China, rather than the United States.

"The Americans are continuing to warn Israel about the growing Chinese involvement in major infrastructure projects & senior Israeli officials say the issue is overshadowing the flourishing US-Israel ties" https://t.co/ZaKtBtSUgZ

Prime Minister Benjamin Netanyahu has long avoided discussion of this issue and deflected attention from it. The fact is Israel likes to play both sides, as they did during the end of the Cold War when they formed a new strategic alliance with Russia. The alliance between the two countries is much older. It goes back to the founding of the State of Israel. Israel provided Russia with intelligence and trade, and in exchange, Soviet Jews poured into Israel to help build the country. Of course this relationship was downplayed during the Cold War, or simply not as publicized. The partnership between the two countries involved education and technology exchanges. This was a signature “foreign policy” strategy outlined by Kissinger and Brzezinski, and something America and Russia engaged in also. They said if the West “opened up trade and borders” and engaged in these kinds of exchanges, it would “democratize” these communist countries. However the exact opposite occurred. This allowed the Communists to further centralize their power and cement their control over citizens, and thus the world. It allowed dictators to track and monitor dissidents, and sometimes “disappear” them.

Israeli tech companies have provided technology with dangerous military applications to the Chinese Communist Party (CCP). This technology such as AI-powered facial recognition systems is used to commit grave human rights abuses — tracking, monitoring and restricting the movements of minorities, or being used to oppress people with a social credit score.

By Signing onto the Belt and Road Initiative (BRI), Israel does stand to gain some. This would help open the Middle East up for trade, but not without drawbacks. Aligning with a country like China, who backs one of your enemies like Iran, could have future unintended consequences. This “Med-Red Railway” is an example of how Israel could benefit from the BRI project. 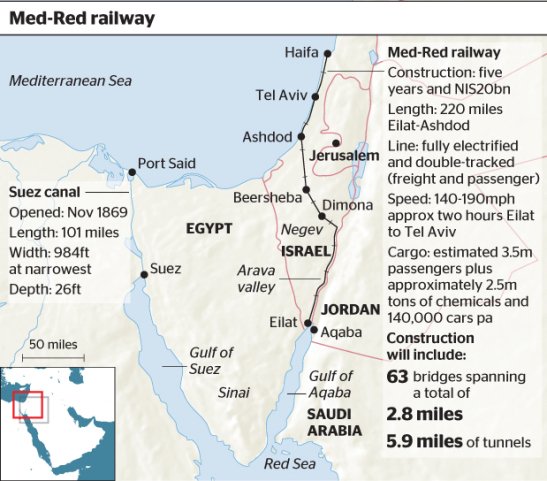 Breaking Defense News describes the visit to Jerusalem, and the issues that Pompeo brought up with the newly formed unity government in an article entitled “U.S. to Israel: No More Chinese Deals; Pompeo’s Flying Visit“:

The United States delivered a clear message to Jerusalem today – avoid further involvement of China in the Israeli economy. The message was one of the main reasons for the very short visit of American Secretary of State Mike Pompeo to Jerusalem — one day before the new cabinet is sworn in.

‘The fact that the visit takes place in these problematic times proves its urgency ‘ an Israeli source said. Pompeo came to Israel with a very strict message – stop all Chinese investment in Israel, either in high tech companies or infrastructure.

Israeli sources said that the strict demand also stems from the suspicion in Washington that China is responsible for the effects of the Coronavirus.

But sources familiar with the issue say the steps that have been taken are not enough. ‘The Chinese use their resources to try and integrate into many Israeli infrastructure projects, especially on the communications and security aspects and that causes big worries’ one expert here told me.

A document prepared by the intelligence community shows that there has been an increase of more than 1,700% in Chinese investment across the Middle East from 2012 to 2018.

Government officials and private sector experts estimate that Chinese investment in Israel has reached 40 billion shekels ($11.4 billion) over the years. Chinese companies bought one of Israel’s largest dairy products companies, and have won tenders and operating franchises to build the Carmel tunnels in Haifa, the Ashdod and Haifa ports and the Tel Aviv Light Train.

The Israeli security organizations are very concerned about Chinese involvement, especially at two strategic sites where the sensitivity is particularly high. One is control of the light train now being built here that passes close to Kirya, the site that includes the Ministry of Defense, IDF headquarters and the air force’s high command.

Israeli sources told Breaking Defense that the new demands by the US will create problems in some major infrastructure projects. They concede that not complying with the U.S demands will have worse results for Israel. – Breaking Defense

While the article does note some of the more recent issues, it whitewashes the history of Israeli cooperation with the CCP and some of the biggest problems.

Pompeo deserves credit for issuing Israel with a stern warning on its cooperation with China. Israeli support for #Chinese technology interests has been tolerated too long.https://t.co/btT5TDmrUi 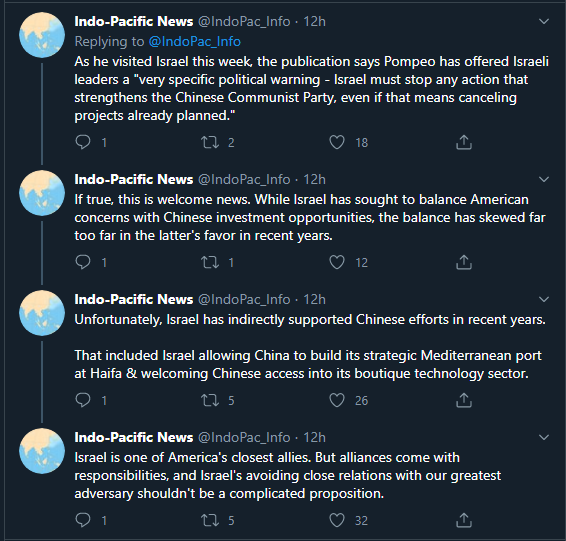 As pointed out by Indo-Pacific News, in recent years Israel has been far too willing to provide China all the things the United States worked to prevent them from obtaining. Indeed some of the technology Israel has sold to China is used against the U.S. Military, something completely unacceptable.

In fact, there is concern that Israel has largely acted as a proxy base for Russia and China. We know the CCP had initial help from the Soviet Union, as did Israel. So what does it mean when our “allies” work so closely with our “adversaries”?

"China may directly control or have influence over 25% of Israel’s tech industry". For China, Israel Loses Its Promised Land Allure- The “Startup Nation” is ramping up scrutiny over mainland deals in tech. Frostier ties will hurt both countries https://t.co/PCDV8Hnm9k @business

If China controls this much of Israel’s high technology sector, and it’s growing, and Netanyahu calls Israel’s relationship with China a “match made in heaven,” how might this effect our alliance in the future? Will Israel side with China on geopolitical issues? Will they continue to supply China with trade secrets and technology that will end up being used against American soldiers?

This spike in Chinese investment should concern everyone, Israelis included.

A well-known Washington think tank examining national security issues, the RAND Corporation has documented this rising threat. RAND was part of the JASON SOCIETY, the group of scientists and academics, that helped advise DARPA, among other agencies, on things like weapons systems and the use of the Atomic bomb.

What are the security implications of such investments? https://t.co/Aw5uUgHTWV

For RAND to be looking this closely at the matter, there must be a really good reason.

China is looking to press all of Israel’s most sensitive emotional buttons in hopes of beating back U.S. pressure to decouple from Beijing. One of Israel’s top journalists is having NONE of it https://t.co/3quoZ2yjT9

BTW, this is how "Jewish friends" are treated in China: "They face aggressive police harassment and persecution by the Communist Party of China (CCP)."https://t.co/vjxkzkdedi

China clearly sees a strategic advantage in trying to cause rifts in U.S.-Israel relations, and they would like to see Israel work more with the Chinese military.

Secretary of State Mike Pompeo arrived in Jerusalem promising to push ahead with the Trump administration’s proposal to resolve the Israeli-Palestinian conflict. But friction over Chinese investments in Israel was also on the agenda. https://t.co/8kHggD68bw

Israelis should be extremely concerned about these growing ties between the Jewish establishment and the Chinese establishment. Netanyahu should be ashamed to be working with a regime that treats its own people like animals.

This would include the Belt and Road Initiative that Israel had already signed, which we now know was a well-crafted debt trap for the uninitiated. And Israel is far from uninitiated.

Israel has responded to Pompeo’s visit and warning with the usual deflection, claiming they will “reassess” one of the desalination plant projects they had planned with China. But this does not address the core issue about the technology transfers. 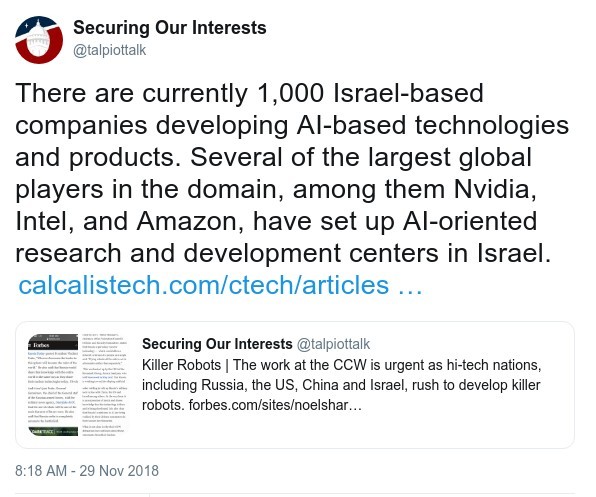 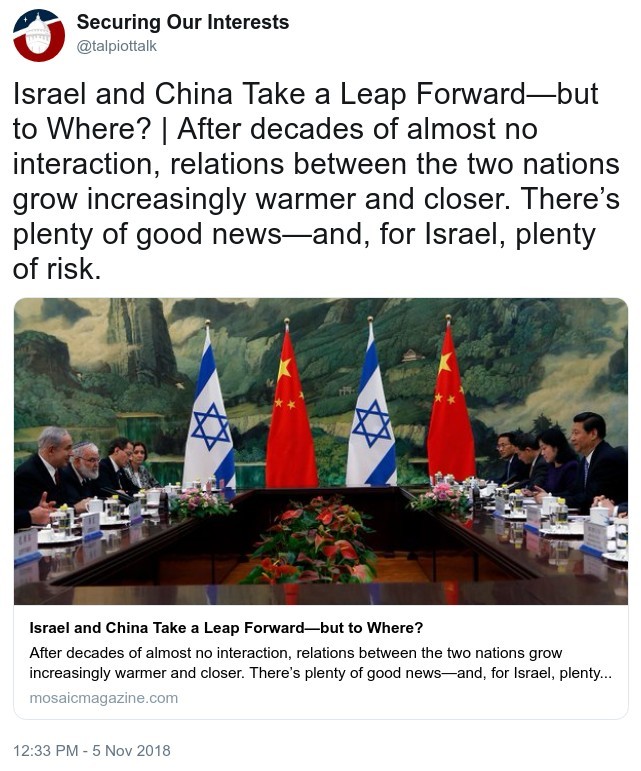 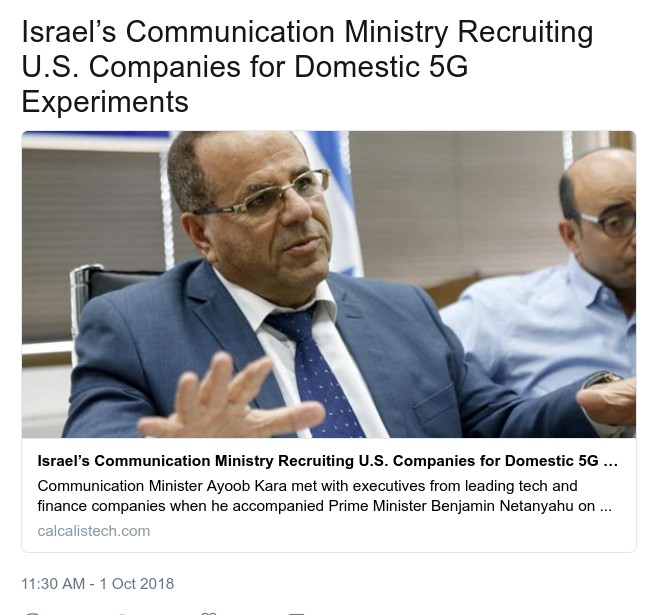 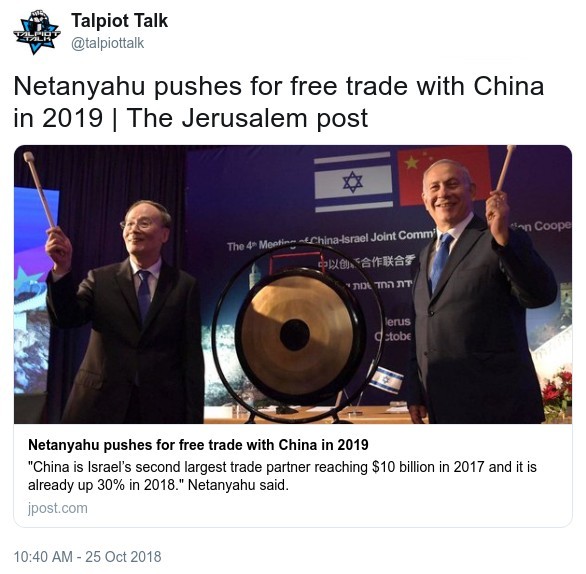 These are just a few of the deals done in recent years between Israel, and the Chinese Communist Party (CCP).

The Times of Israel has acknowledged that China uses trade as a weapon, engaging  in a doctrine called “unrestricted warfare,” justifying things like economic warfare.

In conclusion, Secretary Pompeo has done what many American politicians have been too afraid to do — call Israel out on its tech transfers and deals that put American lives at risk. He should be praised for this strong stance as we have shown that this is a major national security issue.

We can only hope Israel will heed this urgent warning, as I suspect they will. I believe they will soon announce Israel’s withdrawal from the Belt and Road project.

To learn more about the underlying issues, and why Secretary Pompeo traveled to Israel for this in-person discussion, I recommend everyone get caught up on the series of articles about China written by Terry Mach for Patriots’ Soapbox, as well as my most recent article on the Belt and Road Trojan Horse. In addition to that, I recommend the follow articles:

To learn more about Talpiot, Unit 8200 and Israel’s high tech sector and deals, please see the video below:

~~This story is still developing, please check back for updates.

Netanyahu is a Zionists. Part of the deep state along with China. Israel is responsible for creating tensions in the middle east for decades. Divide and conquer tactics. They never should of created a Jewish state in that location after the War in 1948. This is really why we have so many problems in this region of the world ever… Read more »