A week ago, PSB published “Antarctica — The Unknown Continent” in which the recent development of exploration sites by China on the continent was discussed. The article was an extension of a series examining China’s global efforts to create a modern Silk Road* throughout the world.

Since we’re about to explore new Space Age development on the relatively unknown Antarctica, we’ll tell the pre-story of the continent that has reached importance in this modern era.  If Star Wars can do it, so can we.

It might be of interest to us all exactly how Antarctica has become accessible to exploration and exploitation. To explain, we start with  understanding of the advancements taken from the history of Antarctica.

Antarctica, the seventh-largest continent, has been the center of many scientific studies since modern-day man first explored its barren land in 1821.

American sealer Nathaniel Palmer sighted Antarctica on 17 November 1820. The first landing was probably just over a year later when American Captain John Davis, a sealer, set foot on the ice.

Some of Davis’ crew from the American sealing ship, Cecilia, may have landed at Hughes Bay (64°01’S) looking for seals for less than an hour. The ship’s logbook entry reads:

Commences with open Cloudy Weather and Light winds a standing for a Large Body of Land in that Direction SE at 10A.M. close in with it our Boat and Sent her on Shore to look for Seal at 11 A.M. the Boat returned but find no sign of Seal at noon our Latitude was 64°01′ South Stood up a Large Bay, the Land high and covered entirely [sic] with snow the wind coming Round to the North & Eastward with Thick weather Tacked ship and headed off Shore. At 4P.M. fresh Gale and Thick weather with snow … Ends with Strong Gales at ENE Concluded to make the best of our way for the Ship I think this Southern Land to be a Continent.

The sealers were the first recorded humans claiming to have set foot on the newly discovered continent of Antarctica.

Two centuries have passed since those sealers landed and over one century since the first explorers set foot on Antarctica, opening the way for future adventures learning about this mysterious landmass.

These courageous men had begun their journeys without any maps or other forms of navigation.  During the winter months, it is too cold and dark to attempt any exploration. During the summer months, navigation by stars was not much help, sunlight would not allow seeing them.

Cartologists had created maps of the coastal regions of the continent and what they could visually see from the ships they were sailing. Only trekking into the unknown lands, placing markers as the moved would suffice in order to start mapping the land of Antarctica. The terrain had always been a concern for explorers. Mountains, valleys, plateaus, and deep crevasses hampered the exploration as no maps existed to prepare for their quest.

Several expeditions attempted to reach the South Pole in the early 20th century. Many resulted in injury and death. Norwegian Roald Amundsen finally reached the Pole on 13 December 1911, following a dramatic race with the Briton Robert Falcon Scott.

The early maps opened up a means to explore farther into unknown areas of Antarctica, after which explorers from around the world came to this land. International cooperation was needed to ensure Antarctica be kept unscathed to preserve the continent to remain as natural as possible. It was a consensus of the countries having claims in Antarctica that a form of governance was needed.

These countries agreed to create a treaty among them to establish common goals and responsibilities of the signers, leading to the Antarctic Treaty in 1959. The treaty permits 32 countries maintain a presence in Antarctica by way of permanent and/or seasonal research stations. After the signing of this treaty, the quest to establish research stations had become more frequent.

In support of the International Polar Year (IPY 2007-2008), The Landsat Image Mosaic (LIMA) brought the coldest continent on Earth alive in greater detail than ever before through this virtually cloudless, seamless, and high-resolution satellite view of Antarctica. 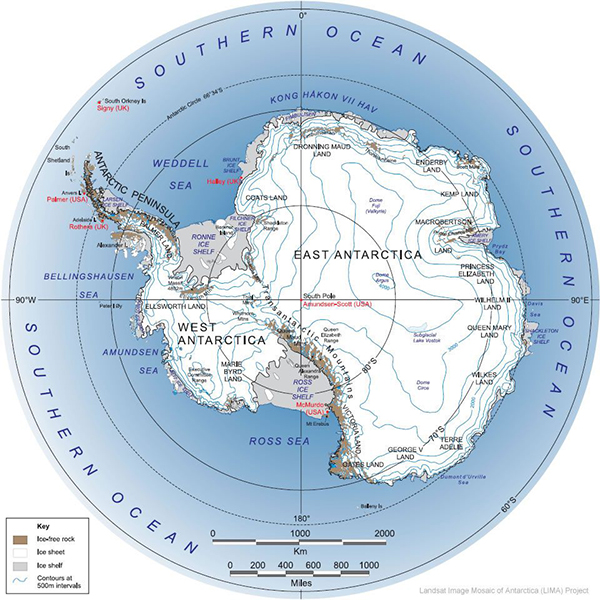 Image from Geoscience News and Information

The map above is an image mosaic of the Antarctic that is compiled by 1000 Landsat images creating a geographic relief map. The map also details the locations of features of the continent not observed before the Landsat imagery.

Landsat utilized laser pulses that when returned reflected laser to the satellite, measures the elevation of features observed. In furtherance to obtain a data set of information to visualize the geography lying under the ice and snowpack, scientist and researchers needed another type of measurement beyond the bounds that drilling has achieved.

“It will be an important resource for the next generation of ice sheet modelers, physical oceanographers, and structural geologists,” said Peter Fretwell, BAS scientist, and lead author.

Gravity gradient shape index map of Antarctica draped on bedrock topography, derived from Gravity field and steady-state Ocean Circulation Explorer (GOCE) data to create curvature images. In remote frontiers like the Antarctic continent, where even basic knowledge of lithospheric scale features remains incomplete, GOCE’s new curvature images help unveil the difference in lithospheric structure between the dense craton composite of East Antarctica and the rift system of West Antarctica. These enhanced satellite gravity gradient images provide tantalizing new insights for lithosphere and large-scale tectonic studies in the least understood continent on Earth. These enhanced images can additionally be used to understand the evolution of the plate tectonic evolution of the Antarctic region and Earth in general. 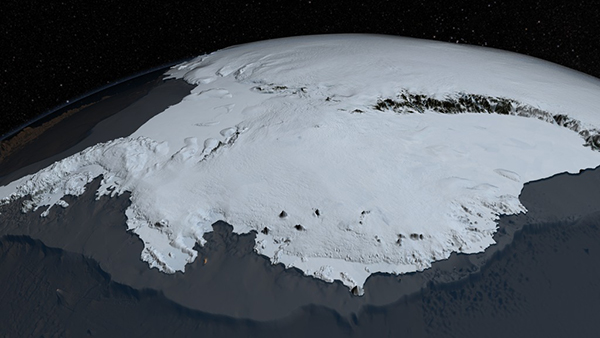 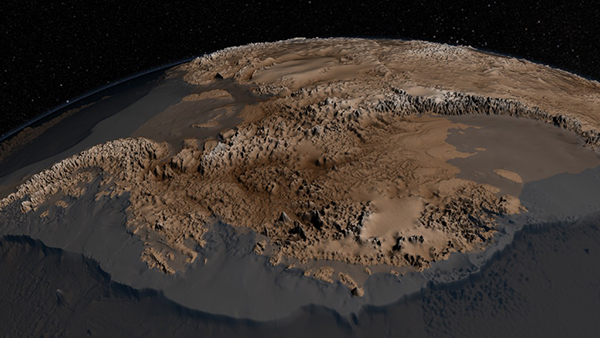 The same image as above without Snowpack and Ice

Researchers now can see what is under the ice. This has opened up another tool to understand what Antarctica has hidden for millions of years.

More scientific studies have discovered many anomalies under the ice as well as several locations to study and explore. The mapping illustrates areas for exploration and where to set new research stations.

Being able to see the terrain has enabled some research stations to find the ideal locations for explorers to locate sites that are suited for their studies.

The Chinese research station Kunlun on Dome A is a good example of using the latest topography mapping. The map shows deep ice which is ideal to set-up a station for China and later the US.

These stations are using highly advanced technology that requires a solid foundation. Both take advantage of the dry flat plateau of Dome A. Most of the two respective bases are used to study space phenomena including the makeup of the gases expelled from sources in the galaxy and beyond.

With the dry atmosphere and constant winds of Dome A allow for more laser experiments. Both China and the U.S. are monitoring space debris as it comes close to re-entry or off coarse satellites.

In the case of the U.S. lasers that are in operation, but for only short periods of time even though the temperature in the summer reaches -31 °Fahrenheit at the Dome A facility. Even at this temperature, laser operation require liquid nitrogen to cool the systems required for longer periods of time.

These types of laser and radar systems are planned to target and move space debris.  In the near future, these obstacles in technology will be overcome.

The lasers are currently being developed to remove existing limitations of usage for longer periods of time. The ultimate goal for each country is to have the ability to destroy satellites in polar orbits.

The race between China and the U.S. to achieve this milestone is progressing quickly and solutions will be functional and ready for use in the next few years.

~~ Cooling of Lasers is still being attempted. As more information becomes available we will be updating the progress.

* For further information on the Treaty and its limitations, see here.