LIVE NOW
For The Republic: with Alan Meyers

There is speculation concerning the expansion of Chinese holdings and claims around the world. From trade practices to the Belt Road Initiative (BRI), to predatory lending to underdeveloped countries.

Unfortunately, the cost versus value of these holdings has taken away from the Peoples Liberation Army, which has suffered cuts in the funding and acquisition of new armaments to protect the country and its people.

From another aspect, let’s unpack some current events that have been occurring since the COVID-19 escaped from Wuhan, China.  At this point, we have to understand that the PLA is the armed wing of the Chinese Communist Party (CCP).

‘We are getting isolated,’ China’s PLA is not happy with Xi Jinping’s antics and there could be a coup

The Chinese Communist Party (CCP) General Secretary, Xi Jinping is facing backlash from a new enemy. For a change, this new enemy is not located within India. Amidst the global backlash against growing Chinese belligerence, the CCP’s armed wing- the People’s Liberation Army (PLA) seems to have turned against the CCP itself.

Qiao is a well-known name, and is the author of a book called “Unrestricted Warfare”, in which he had laid down a game-plan for making China a superpower. Interestingly, he had suggested exporting a virus to create a Pandemic. But his latest message to Xi Jinping warns sternly against any plans to take Taiwan by force.

In an interview, the retired PLA Major General said, “China’s ultimate goal is not the reunification of Taiwan, but to achieve the dream of national rejuvenation so that all 1.4 billion Chinese can have a good life. Could it be achieved by taking Taiwan back? Of course, not.”

Qiao has cited logistical reasons while warning against an aggressive move in Taiwan. He said, “If Beijing wants to take Taiwan back by force, it will need to mobilise all its resources and power to do this…You shouldn’t put all your eggs in one basket. It’s too costly.” Qiao understands PLA’s limited capabilities due to engagement on multiple fronts, which is why he is warning against a move on Taiwan.

The retired Chinese Major General feels that the Dragon’s maritime routes at the South China Sea could get blocked, in a likely reference to the Strait of Malacca. He has also warned that an aggressive move in Taiwan could prompt the US to declare war on China and Qiao has also stated that Western sanctions would hurt China’s economic development.

Dai Xu seems even more critical about the CCP. He wrote an article titled, “2020, Four Unexpected Things and Ten New Understandings About the United States.” Xu has given a brutal reality check to the CCP about the American ability to inflict costs on China. Xu said, “The US would be so tough, imposing stacked tariff increases of 30 billion, 50 billion and then 200 billion.”

He added, “Remember: the 30 billion in tariffs imposed on you will bring an effect of 60 billion, 90 billion, or more. This is where Imperial America is truly powerful.  We must be rational instead of angry, and fight wisely.”

The PLA officer also feels that China has no friends left within the US. Xu wrote, “It turns out that no one in the US congress speaks out on behalf of China; the two parties of the US are surprisingly unanimous on a major trade policy, which really hurts all Chinese people.”

Within the PLA, it is being understood that China has no friends left in the world due to CCP’s hawkish attitude. Xu also echoes the same sentiment when he says, “China has provided assistance to so many countries, benefiting them in so many ways, but at this critical moment, none of them has taken any unified action with China.”

The anger within the PLA is not very surprising. The top brass of the PLA has many reasons to be angry with the CCP. Top Chinese companies like Alibaba, Tencent, Huawei, Xindia Steels Limited, Xinxing Cathay International Group, Chinese Electronics Technology Group Corporation, and SAIC Motor Corporation Limited have PLA links. Top Chinese Generals enjoy a lot of influence over these companies.

But today, Xi Jinping’s wolf-warrior diplomacy has invited outrage against all these companies. The US is making all attempts to push Huawei out of the world map. Similarly, the seven Chinese companies mentioned earlier are on the radar of the Modi government for further action.

PLA Generals are therefore furious about Xi Jinping’s ongoing wars with the diplomatic world. PLA understands that these companies are losing out, not because of PLA links but because Xi Jinping’s CCP is engaging countries like India, the US and Australia in endless battles.

Moreover, the Galwan Valley bloodbath on June 15 this year was bound to trigger an outrage within the Chinese PLA sooner or later. Xi Jinping’s Himalayan blunder got far too many PLA troops slaughtered in the Galwan Valley area. Within China, the PLA casualty figures were not released, nor were the dead given any military honours/ memorial service. This has driven the PLA further away from the CCP.

After the Galwan Valley bloodshed, Jianli Yang, a Chinese dissident and the son of a former Chinese Communist Party (CCP) leader wrote, “Retired and hurt PLA veterans could become a force against the Chinese Communist Party regime”. He added, “the CCP leadership cannot afford to undermine the veterans’ potential to launch a collective and “armed” anti-regime action.”

There are other issues involved with PLA too. The veterans are deprived of pensions, jobs and other benefits. Mysterious deaths of PLA veterans protesting against such issues is said to be a regular feature in China. And then, of course, there are sociological issues involved with the PLA.

The brutal one-child policy of China has given rise to a sub-standard military force. The Chinese families, including those of PLA officers/troopers are very emotional about their child, since there’s only one. Within the PLA families, there is a lot of resentment about Xi Jinping and CCP’s expansionist push.

The PLA families are not ready to sacrifice their children at the altar of CCP’s hunger for territory of other countries. The same sentiments are getting reflected in the remarks of Qiao Liang and Dia Xu. The PLA hates the CCP and there are growing signs of mutiny from the armed wing of the Chinese Communist party.

From the article and video above, it is apparent that the PLA is not very happy with Xi Jinping and others in the CCP leadership.

Clearly Xi does not agree. As a poke in the eye to the PLA, he has launched two new Amphibious Assault Ships near Taiwan and into the South China Sea. 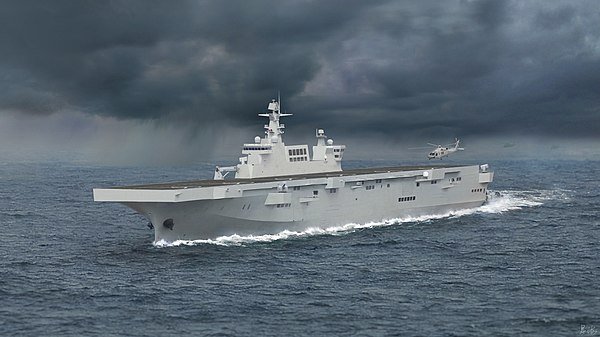 The location is very close to the island of Taiwan, the report said.

This is the first time the Type 075 has been spotted in Sanya. Local residents in Shanghai, where the ship was built, claimed the ship left the city in late October.

China’s first Type 075, which was launched in September 2019, successfully completed its first sea trial in August this year.

A new sea trial in the South China Sea will further test the warship, which is a necessary step before it enters service with the PLA Navy, Song said.

China’s second aircraft carrier also underwent testing and training in the South China Sea in November 2019, prior to being commissioned into the PLA Navy in December 2019.

When the aircraft carrier, later named the Shandong, left its shipyard in Dalian, Northeast China’s Liaoning Province, and sailed to the South China Sea for the sea trials and eventually arrived in Sanya for a commissioning ceremony, it made a transit through the Taiwan Straits.

Chinese mainland military experts said that from a geographical point of view, if a ship wants to sail between the northern and southern parts of China, it would likely sail through the Taiwan Straits, as it is the shortest route, Song said.

This could also apply to the Type 075. PLA warships can sail through the Taiwan Straits however they want, and there is no “middle line” as both sides are Chinese territories, analysts said.

It would be very normal if the Type 075 sails through the Taiwan Straits, and media and authorities on the island of Taiwan should not over-interpret it, Song said.

However, as a type of warship designed to play a major role in amphibious assault missions, the Type 075 amphibious assault ships are expected to make a possible reunification-by-force operation one of their top priorities, analysts said.

Amphibious assault ships mainly conduct vertical deployment and landing missions on islands and reefs like the island of Taiwan and those in the South China Sea. With their large flat flight decks, these warships can transport troops vertically via helicopters much faster than using only horizontal means, Beijing-based naval expert Li Jie told the Global Times when the second Type 075 ship was launched in April.

The information above demonstrates that there is “trouble in paradise.” The CCP needs to placate the PLA as they are the key to the ambitions for world domination as the CCP’s expansion continues world-wide. Without the PLA the CCP has been semi-neutered, yet Xi ignores the advice of the Peoples Liberation Army backing. In jeopardy is any move forward with the overarching plan that relies on the military might of the PLA. Moreover, the dispute hampers the CCP’s grip on its current expansion holdings, while stunting any new venture.
Will the PLA continue to follow orders the CCP gives? Time will only tell.
** Check back, as the dispute continues, for updates as they come in. **
Continue to visit Patriotssoapbox news for other news and information.